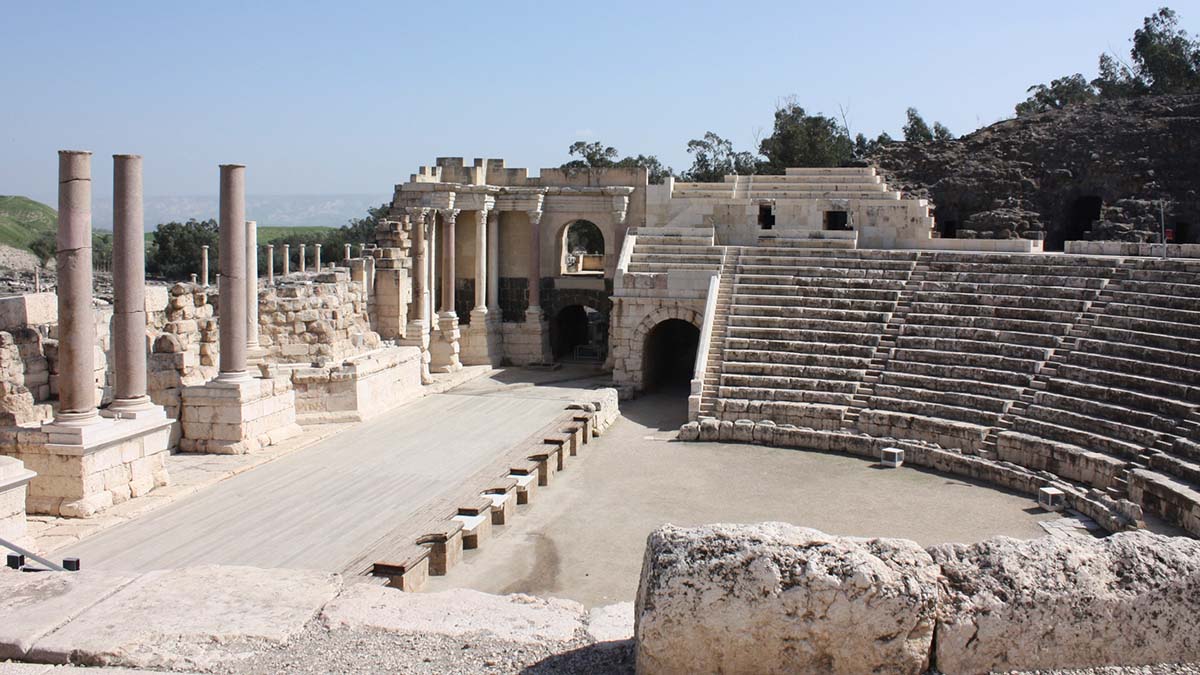 Hunger pains, tongues sticking to the roofs of our mouths and the heat of the morning forced us to stop for breakfast in a town named Beit She’an as we were driving north to Tiberias. Finding a little strip mall restaurant, we ordered our food and then proceeded to see if Beit She’an was even listed in our guidebook. To our surprise what we found was that people had settled here for over 5000 years. Taking the life-sized poster of Justin Bieber, whose hometown is about a 90 minute drive from where we live in Canada, hanging in a nearby shop window as a good omen, we decided to check the ancient site out. 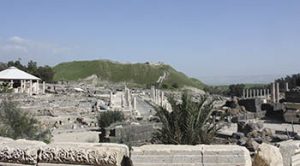 An inconspicuous mound (tel) outside the modern city of Beit She’an stands as silent witness to over five millennia of habitation. If such mounds could talk this one would have a lot to say about ancient civilizations; about the footprints they left here; about conquerors come and gone; and it all seems like only a moment in time.

Why did people continuously settle here you may ask? There was a reliable water source at nearby Harod Creek (Nahal Harod). Furthermore this site was strategically significant because of its location at the junction of the Jordan River Valley and the Jezreel Valley. The people controlling this city also controlled the routes from Jordan and inland to the coast and from Jerusalem and Jericho to the Galilee. You can see the strategic importance of the site as you enjoy the panoramic view from the top of the tel. 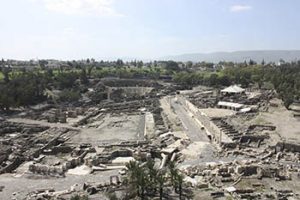 The earliest dwellings that you see visible on the tel were constructed using flat clay bricks and date to the 3rd millennium BCE. Civilization here really only took off during the 12th to 15th centuries BCE under the Pharaohs of Egypt when the city was their administrative headquarters for this region.

Enter the 12th century BCE residence of Egyptian Governor Ramses-Weser-Khepesh. The Egyptian-style mud brick home, whose remaining walls are 4 to5 feet high, consists of a central hall surrounded by rooms on all four sides. Inside you find two circular stone bases, each approximately 5 feet in diameter and 4 feet high, on which wooden columns were placed to support the ceiling. Remaining décor in the house consists of a now broken statue of Ramses III that commemorates the Egyptian victory over the “Sea People” who invaded this area in the early 12th century BCE.

Fire destroyed the city in the mid-12th century BCE and with this Egyptian control evaporated. The stage was now set for the Philistines to move in and capitalize on the power vacuum, followed by the Israelites. In 1004 BCE, King Saul’s army fought the Philistines on nearby Mount Gilboa and the latter prevailed. The victors hung the dead bodies of King Saul and his three sons from the walls of Beit She’an (1 Samuel 31:10). To date, archeologists have not uncovered any portion of the city wall dating to that period. The Israelites would eventually conquer the city and the Philistines would disappear from history, although you can still occasionally meet one in a bar or pool hall.

You find the remnants of a gray stone Israelite citadel dating to the time of King Solomon on the tel. The Assyrians destroyed this fortress in 732 BCE (2 Kings 15:29) and then carried off the city’s residents into slavery. The tel remained in ruins until the 3rd century BCE when it was resurrected under the Hellenistic Seleucid Empire and named Scythopolis. 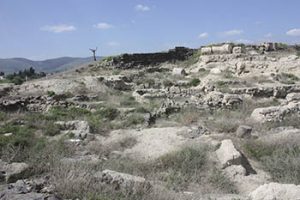 The Roman General Pompey captured Scythopolis in 63 BCE and then the city really flowered. Focus shifted to the flatlands on the south side of the tel but not before the Temple of Zeus was constructed as the last major structure of any importance on the mound. You can still find some white marble column drums and Corinthian capitals from this temple on the side of the tel.

Roman Scythopolis was notable for its colonnaded streets paved with basalt stones. You find two rows of white marble columns lining each side of the street whose purpose was to support a roof over the elevated sidewalks. Public buildings and shops lined these sidewalks. Imagine middle class Romans shopping during the heat of the day under these covered walkways. They socialized at public bathes; they were entertained at the theatre and at other diversions including outdoor sports involving gladiators and indoor sports at the brothel.

The Roman theatre [TOP PHOTO], still in use today, dates to the 2nd century CE. It originally accommodated 7000 people in three tiers of limestone seats but only the first tier survives today. A row of large pilasters outside the structure hints at the missing tiers. The scenery wall on stage facing the audience was originally 20 meters high.

No Roman city was complete without a bathhouse and Scythopolis boasted two of them, one on the east side of town and one on the west side. Citizens were leisurely ushered from the change room (apodyterium) to the steam room (caldarium) to a warm room (tepidarium) to a cold room (frigidarium).

Heating for the caldarium was facilitated using the hypocaust method where the flooring was heated from spaces below. You can see the exposed rows of stumpy brick cones that once supported the floor of the caldarium in the western bathhouse.

A thorough massage was also included for good measure. Grooming tools are displayed including an oil flask from which olive oil was poured onto the skin during a massage. There is also a scrapper for removing the oil after. Visitors should note that bath soap and shampoo had not been invented yet. 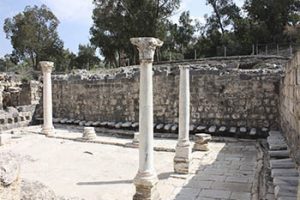 The public latrine adjacent to the eastern bath house accommodated as many as 57 people seated on very public toilets set around a central courtyard. Each individual, male and female, sat on two smooth plinths extending from the wall as they discussed the business of the day with 56 of their closest friends. The sewage system consisted of a channel of running water beneath each row of seats that allowed for drainage. Feel free to sit down and take a load off.

The Sigma was a semi-circular plaza near the western bathhouse. The name of the plaza originates from the Greek letter sigma inscribed in one of the twelve rooms around its periphery. These rooms may have served as shops or possibly a brothel. One of these rooms features a mosaic of Tyche, the Roman goddess of good fortune, on the floor. She wears the walled city of Scythopolis as a crown and holds a horn of plenty filled with fruit and a fig tree in her hand. 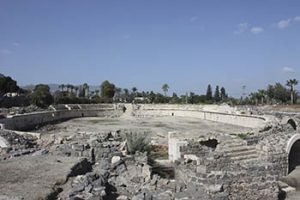 The Roman Amphitheatre dating to the 4th century CE accommodated 6000 spectators for gladiatorial battles and contests involving wild animals. The oval structure originally had 10 to 12 rows of seats of which only three remain today. The other rows were dismantled by Crusaders who were constructing a fortress nearby. A series of rooms with arched roofs at various locations around the outside of the amphitheatre may have served as cages for wild animals.

The Nymphaeum was a finely decorated public fountain building constructed in the 2nd century CE and rebuilt in the 4th century CE, possibly to repair damage sustained from an earthquake in 363 CE. Originally at a height of 13 meters above street level, the fountain was designed so that water flowed down two levels through pipes in the façade and into a central pool at the base. You can still see fragments of the Nymphaeum, including columns from the façade, which toppled due to a major earthquake in 749 CE. A scale model of the Nymphaeum at the site of the original gives you an idea of what the structure looked like.

Earthquakes are not uncommon in this area because the nearby Jordan Valley has a major fault line running through it. The end of Scythopolis came with the earthquake of 749 CE and the city never recovered after. However whether it is named Beit She’an or Scythopolis, this city will always be remembered in the Bible and the pages of history. 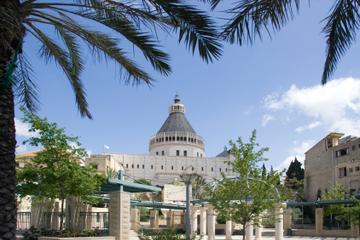 By car, from the Sea of Galilee travel south on Road 90, turn right onto Road 71 towards Afula/Beit Shean, and shortly afterwards, left onto 7078. By bus: take the Egged Bus 412 from Jerusalem to Afula which stops in Beit Shean. Admission to Beit She’an National Park is 28 Shekels.

The Roman Amphitheatre is not inside the national park. Admission is free.

About the author:
Troy Herrick, a freelance travel writer, has traveled extensively in North America, the Caribbean, Europe and parts of South America. His articles have appeared in Live Life Travel, International Living, Offbeat Travel and Travels Thru History magazines.