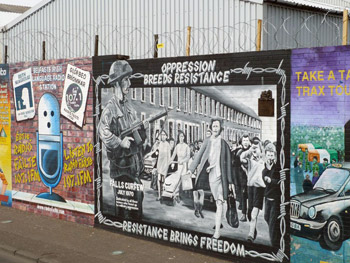 I was back on the train to Belfast after decades, the new stock state-of-the-art shiny, clean, comfortable, smooth and fast. Rolling neon lights flashed up the destinations along the line. A soothing English voice told us our next stop. Automatic doors slid open effortlessly. The female voice recited the remaining destinations. Surely I was in the English Home Counties, not in my homeland?

Back in the 1980s the train to Belfast shuddered and creaked its way to the city. The seats were blighted with cigarette holes and knife slits, the floors covered in litter, the walls plastered with graffiti. Disaffected youths smoked in the no smoking compartments and no one dared challenge them. This was Northern Ireland at the height of the troubles: troubled, angry, defiant.

I breathed out slowly, and soaked in the past and the present. Across the way, a couple were speaking in the tongue of my childhood. A language half forgotten. Every sentence was punctuated with a verbal full stop.

I smiled to myself. When did my birthplace become a foreign country?

I reached the city, the views of Belfast, strangely familiar: The Belfast Hills on one side, clouds scudding across the hillsides, the sky overhead a mixture of threatening black and baby blue; then the city in front of me with the bright yellow Harland and Wolff cranes towering over it.

Off the train, I met a friend at the City Hall. We dodged the ‘tour-of-the-troubles’ operators, touting for business and headed to Donegal Square, the main shopping area. Back in the 80s, you entered it through a gated terrapin, to be given a thorough body search – repeated in every store you entered. Shopping in the city wasn’t for the faint hearted. People in Derry refused to go to Belfast because they felt it was too dangerous. Belfast citizens wouldn’t go to Derry for the very same reason. But now, there was such an air of freedom and optimism, I felt dizzy. We continued on to Victoria Square and the new shopping mall, with its glass dome offering 360 degree views: of the city, the river Lagan, the Lough, the sea beyond, and the Black Mountain on the skyline. 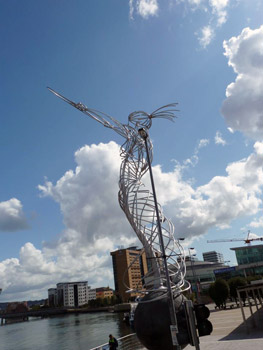 We walked on to the waterside. I had no idea it was so close to the city centre. During the troubles it was a forgotten wasteland. By the Lagan, we gazed up at the Ring of Thanksgiving, a monument to peace and reconciliation. The locals prefer to call it ‘The Thing with the Ring,’ ‘Nuala with the Hula’ or ‘The Doll on the Ball’. They have a way with words here. Just a stone’s throw away is the handsome Customs House and the Albert Tower, Belfast’s very own Leaning Tower of Pisa. Once again, that infamous Belfast humour kicks in, with the locals describing it as having the time and the inclination.

A few months later, I took one of the open-top buses with my son, feeling odd for playing the tourist in my own home city. But I wanted to show him Belfast – and to see the Republican Falls Road that had been a no-go area for me as a young Protestant girl. 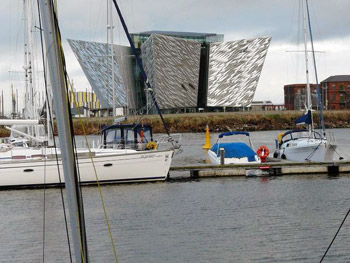 The bus took us along familiar streets: Donegal Square with its handsome Baroque-styled City Hall and Donegal place, the main shopping drag, now lined with 16 metre high sculptural masts, homage to 8 ambitious ships (including the Titanic) built by Harland and Wolff in its heyday. We skirted the Lagan again and the newly regenerated waterside and along city streets that were so familiar and yet so different. Gone were the grey police jeeps, the wary soldiers, the turnpikes and terrapins, and the beefy security guards on each and every shop door. Gone was the smell of subdued fear. And in its place there was art and sculpture and new innovative architecture. There was vitality and a joie de vivre in Belfast.

We drove down Bedford Street and onto Great Victoria Street past Queen’s University: streets I knew well. We passed the canary yellow City Hospital. Our guide laughed and told us Prince Charles taken one look at it on a visit to the city and claimed it was one of the ugliest buildings in Europe. Now we call the hospital ‘Camilla!’ he said. Then we were driving over the West link and onto the Falls Road, a stone’s throw from the modern, cosmopolitan city centre and yet another world. I looked at the so-called peace lines, in places 25 foot high walls, reinforced with iron, brick and steel. We passed gates, closed each evening and at weekends. It was a sobering reminder of a society that is still damaged and wounded.

The bus hovered outside the Bobby Sands Memorial Garden, a hunger striker who had starved himself to death in his attempt to gain political prisoner status. On his death, Republican supporters heralded him a hero.

The commentator on the bus spoke in hushed, reverential tones. It wasn’t difficult to guess his politics.

We reached the political murals. ‘Oppression breeds resistance, resistance brings freedom’. The mural commemorated the Falls curfew of 1970. There was a painting of Che Guevara and murals supporting Cuba and the Basque Separatists. There were condemnations of Israel and the US. Most of the murals focused on the wider politics of the world and Marxist communism. There was also a mural of Bobby Sands. 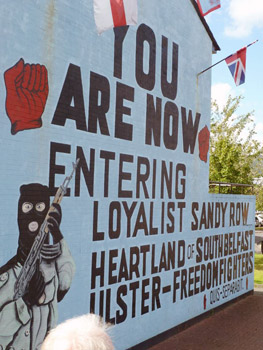 We continued on past the remaining infamous Divis Flat, once an IRA stronghold. During the Troubles, the army had occupied the top two floors and could only access the building from the air. The flat occupants were subjected to searches night and day, their homes torn apart. Most, if not all of them, were involved in terrorist activity- or at least supported it. The residents hated the army occupation. The animosity was mutual. A nine year old child was killed by the RUC (the police) who claimed they had been under sniper attack at the time.

In Protestant Shankill and East Belfast, the loyalists had their own murals: ‘You are now entering Sandy Row Heartland and ‘No surrender’. There were memorials and shrines to Rangers, the Protestant Scottish football club, to the soldiers who had died in two World Wars and the UDA (the Unionist terrorist equivalent to the Republican IRA.) There were paintings of men in balaclavas with guns cocked that sent a chill down my spine.

It occurred to me that the two communities had more in common with each other than they would ever acknowledge, with their shrines and monuments, their murals and mafia-type communities. And yes, there was warmth and generosity and community and support.

The people of Belfast are full of contradictions: they are passionate, fierce, loyal, resourceful, sharp, intelligent, vengeful, quick to anger and slow to forgive and forget (some of them are still remembering 1690 and beyond!). At the same time, they are among the kindest and friendliest people on the planet. When you’re in Belfast, it’s easy to forget that you are in Northern Ireland’s capital city and not in a village. Then there’s that wonderful, Belfast wicked sense of humour. 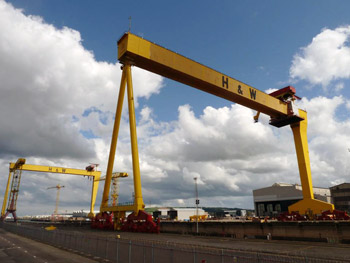 The bus continued on to the Titanic Quarter past the Samson and Goliath cranes that are monuments to a once wealthy and successful Belfast. The old ship-building and linen industries had faded away and unemployment and poverty had taken its place – and with it the seeds of discontent started to sprout.

From the bus, the Titanic museum, an iconic aluminium-clad building, rose out of the dock wastelands like an ice-clad ship from the sea. Here in Belfast, the Titanic has been, in a sense, resurrected a century later: with the building of the Titanic Visitor Centre. Back in 1912, the city launched the mighty Titanic, designed and built in Belfast’s docks. At this time, the city was buzzing with success. Then the Titanic sank and the shipyards closed down. It was the prologue to ‘The Troubles’. By the 70s, Belfast had become a dark, strife-torn city. Fast-forward 40 years and Belfast is reclaiming its place in the world. No longer ashamed of its past (and happy to take ownership of its infamous ship again), Titanic Belfast is the largest Titanic attraction in the world and hugely popular.

Apart from Titanic Belfast, it’s worth visiting the Drawing Offices, the Pump House and the Dry Dock. Climb down the 44 feet to the bottom of the dry dock and you’ll begin to get a sense of the sheer scale of the Titanic. Inside Titanic Belfast, you can walk through the history of Belfast. As your silhouette mingles with the Victorian figures that hurry across huge projected images of Victorian Belfast, you’d be forgiven for thinking you’ve stepped back through history and are walking with ghosts.

This new, state-of-the-art museum is a symbol of hope and optimism, just like the Ring of Thanksgiving. Belfast is lifting its head, no longer ashamed of its past and looking to the future. Maybe this optimism, pride and positive energy will spread to the Falls and the Shankill and to the other working class areas of West Belfast, and the wounds will heal. I hope so.

WALK THE CITY
♦ Grab a free map from the information centre and create your own route. You don’t really need a guide as there are information boards across the city
♦ Belfast i-tours: Download a guide to your mobile, available from Belfast Welcome Centre
♦ Follow the Titanic Trail along the River Lagan. It’s well sign-posted with explanation boards along the way.
♦ Follow the sign-posted Merchant Trail. Belfast was a thriving, successful shipping and merchant city at the height of its powers when the Titanic was built.
♦ Join a guided walking tour. Choose your interest. There are Ghost Walks, Political Tours, Titanic Tours and walks uncovering ‘Hidden Belfast’.

BY BOAT
♦ Tour Belfast Harbour and the Titanic area

BY TAXI
♦ Take a taxi tour of the Troubles 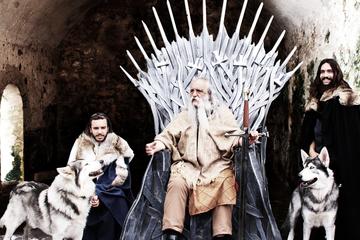 GETTING THERE
♦ There are scheduled flights into Belfast International and Dublin airport from all over Europe and world-wide destinations. Dublin is only two hours away from Belfast by train.
♦ There are a number of no-frill flights fly to Belfast City Airport from other parts of Ireland and the UK. There are sailings from Liverpool to Belfas,t and from Scotland (with a connecting train service).

WHERE TO EAT AND SLEEP
♦ McHugh’s bar and restaurant is Belfast’s oldest surviving building (1711). Situated in Queen’s Square, the historical commercial centre of the city, McHugh’s serves traditional Irish food with a modern twist. Try the massive Flintstone-esque “on the rock” steaks (served on slabs of slate) – or if meat is your poison, there are tasty vegetarian options such as champ (Creamed potatoes with scallions).
♦ There’s a wide selection of eateries in the Victoria Shopping Centre off Donegall Square.
♦ You mustn’t miss the Crown Liquor Saloon, one of the most beautiful historical pubs in Europe.

WHERE TO SLEEP
♦ There’s a range of hotels, Bed and Breakfast accommodation, and self-catering options in the city to suit all budgets.

All photos by Helen Moat:
Republican mural on the Peace Line
Ring of Thanksgiving
Titanic Museum from the marina
Protestant Shankill and East Belfast loyalist mural
Samson and Goliath cranes

About the author:
After decades, Helen Moat returns to her home city, Belfast, to find it had changed beyond all recognition. Helen Moat spent her childhood squished between siblings in her Dad’s Morris Minor, travelling the length and breadth of Ireland. She’s still wandering. Helen was runner-up in 2011 British Guild of Travel Writers Competition and was highly commended in the BBC Wildlife Travel Writing Competition this year. Her writing has been published in The Guardian, Telegraph and Wanderlust magazine as well as online. She blogs at: moathouse-moathouseblogspotcom.blogspot.co.uk