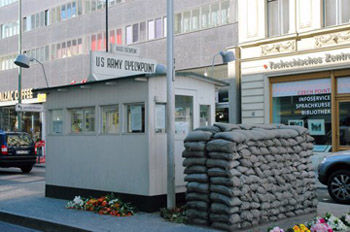 “In Berlin we don’t have woodpeckers; we have wallpeckers,” Eva, a native Berliner, tells me. “People come to the Berlin Wall with picks and hammers trying to take home a piece of history.”

I can understand why. I have thought about doing this myself. Why pay twenty Euro dollars for a small piece of the wall when you can get your own much larger piece free?

In Berlin, most of the wall was taken down on November 9, 1989. As I watched it on television, part of me was sad because it had come down before I had a chance to see it. Another part cheered the people who were dismantling it, wishing I could be there helping. Sixteen years later I have finally made it to Berlin. A different Berlin than I imaged. I had grown up watching movies about the cold war where the divided city and the infamous wall figured prominently. The Berlin I now see is united. Some of the wall still stands but is a tourist attraction, not a political statement. I am staying in a hotel in East Berlin, but it is not necessary for me to go through border control at Check Point Charlie to get there. It is hard to tell East and West Berlin apart now because they look so much alike and the wall is no longer there to divide them. 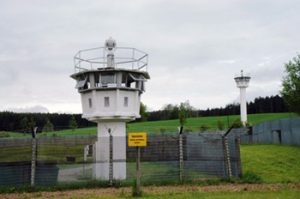 The Second World War was a distant memory by the time I was born, but the cold war raged in full force. The news regularly contained stories about people trying to defect to the West. News footage showed people being shot in the “no-man’s land” between East and West Germany. Armed guards patrolled the border. They were always shown walking along the inside of the wall carrying machine guns and leading their vicious looking dogs. Check Point Charlie was the main crossing point in Berlin where all the action happened in the movies and the newsreels. Manned by Americans on the West and communist troops on the East, it represented the superpower standoff that was at the heart of the cold war. Spies from both sides regularly slipped across the border. At least they did in the movies I watched. 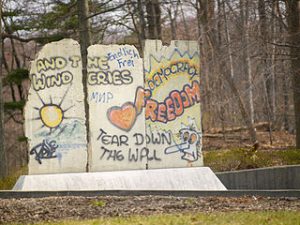 Seeing the wall now, I do not find it imposing. It has lost the ability that it had to induce terror in people’s hearts. It is a concrete structure that stands nearly nine feet high. At the top, there is a cylinder shaped border that is covered with barbed wire. It is made of concrete panels that were pre-poured and assembled practically overnight in August 1961. Much of the wall that faces the West was painted with murals that protested the very existence of the wall. They are still there. The art work is surprisingly good.

The Berlin wall stood for twenty-eight years, two months and twenty-seven days. It was 155 kilometers long. It separated not only East and West Berlin but the German State of Brandenburg as well. It was built to stop the migration of people from East to West. These may be the historical facts but not the image of the wall that remains in my mind. To me it represents the cold war, a world divided by ideology. When the Berlin wall came down, the Soviet Union fell soon afterwards and the cold war ended.

I will leave Berlin with my own piece of the wall. I bought it in a souvenir shop next to the Checkpoint Charlie Museum. It’s a small piece of concrete painted with rainbow colors and comes with a certificate of authenticity. Now I too am a wallpecker.

About the author:
Diana Ellis is a Canadian travel writer who has visited over 30 different countries on seven continents and has written extensively about her adventures. Her travel humor and photographs have appeared on various travel websites. Diana also writes for local historical publications. She currently resides in Edmonton, AB Canada. More info at: diellistravelholic.com.

Photo credits:
Berlin Wall Monument by The Central Intelligence Agency / Public domain
All other photos are by Diana Ellis.