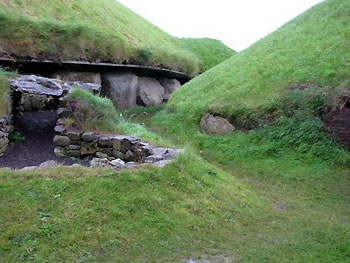 Welcoming the Return of the Sun at the Spring Equinox

I was soaked. The rain and wind had not let up all day. I had a brief respite from both as I boarded the small bus from the Visitor Centre which had taken our group to Newgrange*, a huge megalithic passage tomb. The Visitor Centre acts as a gateway to the Bru na Boinne area, the bend of the Boyne river. In this area lie three Neolithic (4000-2500 BC) Passage Tombs—Newgrange, Dowth and Knowth built over an area of 10 square kilometres—Newgrange, the most famous, Dowth, still unexcavated and Knowth, the largest. Five thousand years ago thirty eight passage tombs were built. The area became known as Bru na Boinne– the cemetery of the Boine. The river, Boine, considered sacred, encircles the area on three sides giving great protection. These structures look out from a black slate glacially created ridge seventy metres higher than the glacial valley through which the Boyne River runs. The warmest part of Ireland, the land boasted of three types of soil: clay, gravel and slate, all fertile. Variety of soil types meant that neither excessive drought nor rain would be a crisis. Six thousand years ago Ireland’s first farmers arrived, cut down trees and planted barley and wheat as the main crop. They also raised sheep, pigs, cattle– much like today’s farmers do. Abundance meant wealth and extra time to devote to the building of great monuments, numerous auxiliary smaller structures, the development of advanced social ritual and probably the development of astronomical ideas and rituals which were tied to astronomy. 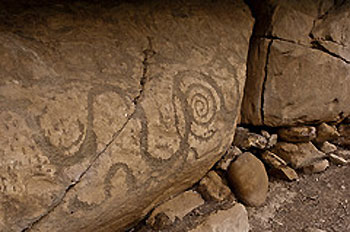 Knowth, specifically, was first established in the early Neolithic six thousand years ago. First settlement is the ancient remains of a wooden/wattle rectangular enclosure with probably a thatched roof. Knowth is one thousand years older than Stonehenge, England and five hundred years older than the Pyramids of Giza in Egypt yet most people have never heard of it. The first use of the tombs was marked by cremated human bones and other material inside and elaborate ceremonies outside.

There is little evidence of the use of Knowth for the Bronze and Iron Ages, but in the first few centuries AD there is evidence of a new settlement. The mound itself became a defended structure with two dug ditches, like moats. There was only one protected entrance on the south-east and burials were placed around its base.

By AD 800 Knowth became a royal residence of the kingdom of North Brega. Now there were rectangular houses, underground storage areas. In the late twelfth century Anglo-Normans made further fortifications atop the large mound. 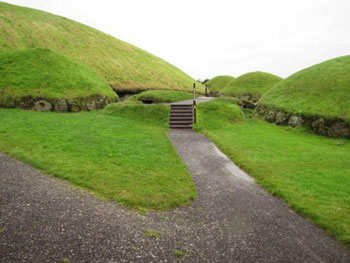 Knowth’s most impressive passage tomb is a great grass-covered mound measuring 80m by 95m. It is encircled by 127 kerbstones, a ring of engraved huge stones. Our word ‘curb’ must come from the same idea of being marked as a boundary. Passage tombs have certain features: being in the shape of an egg, or tumulus; being outlined by kerbstones, having a passageway and also an inner chamber often in the shape of a crude cross.

One of Knowth’s outstanding features is the huge amount of decorative stone work on the interior passageway stones and on the kerbstones. Knowth holds more than half of the six hundred decorated stones in the Bru na Boinne sites—this being over one quarter of all the megalithic art in Europe. 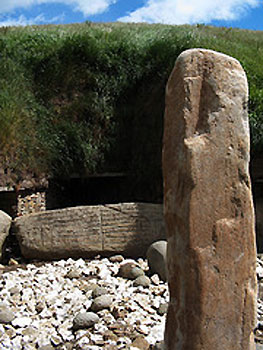 There is evidence that the art developed over many centuries and also ideas were apparently borrowed from Britanny on the continent. A picked cup mark is a feature of Knowth stones and may well represent the idea of a tunnel, a symbol of death. Also, unlike Newgrange, the stone work is developed based on the shape of the rock itself.

Under this large mound are two passage tombs, back to back. One faces west, has a 32m passage and a rectangular chamber. The other faces east, has a passage 35m long and ends in a cross shaped chamber. Since the exploration of this passage tomb in l967, there has been speculation and debate between scholars of prehistoric structures and archaeologists as to whether the eastern passage was aligned to the spring equinox, March 20th, and the western passage, aligned to the autumn equinox, September 22nd. Martin Brennan, a scholar, maintains that the chambers may have been aligned to also receive moon beams and that lunar images do appear on some of the inner stones. A large area of cement and metal which is supposedly shoring up part of the entranceway interferes with any proper investigation at this time. It is unknown when any true investigation as to the spring equinox is planned for the near future, especially with a sister passage tomb, Dowth, still needing to be excavated. 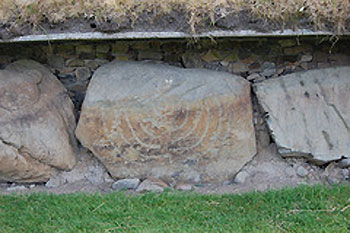 Still burdened with my pull-along bag, my pack sack and umbrella I entered the mound through the entrance which faced east. I slowly made my way along the stoned passageway to the crude cross-shaped chamber, delighting in the subtle light and the energy of the countless many who had also walked as I now did. What will be revealed in the years to come?

Beginning from the east a long gravelled pathway, constructed since the mound’s excavation, reached the top of the mound. Buffeted by wind and rain I made my way up to the flattened top of the mound, the wind again turning my umbrella inside out. I looked out over the Bru na Boinne valley, the river and in the distance I could see Newgrange rising out of the distant grassland. Yes, this was another of those moments in Eternity where I could feel my Irish ancestors walking beside me, hear their voices and feel their touch. I, too, will be back.

*Read the author’s ‘Newgrange: Bringing In the Light With the Winter Solstice’ at http://travelthruhistory.com/html/memoirs33.html. 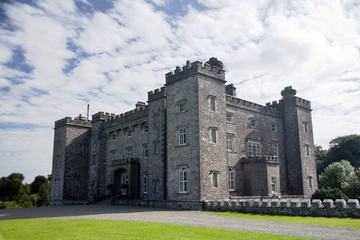 Castle & Curiosities of the Boyne Valley

Knowth, as with the other passage tombs, cannot be directly accessed. You must be on a guided tour that sets off from the Bru na Boinne Visitor Centre by bus. You reach the centre itself by local bus, bicycle or car.

To Get to the Centre:
From Dublin: M1 motorway heading north and turn onto Donore Exit near Drogheda. Travel 6 km to Donore, turn right near the bar and restaurant, travel l km to the Visitor Centre or take a day tour that leaves from Dublin.
From Drogheda: Bus Eireann runs a bus to the Visitor’s Centre. It takes 20 minutes and runs from l0:15am to 4pm.

Other Sites To See:
Newgrange: Another Passage Tomb close to Knowth; associated with the Winter Solstice
Dowth: a lesser of the three Passage Tombs in the same area, yet to be fully excavated
Hill of Tara: 15 km from Newgrange and Knowth; a Passage Tomb known as the ‘Mound of the Hostages’; thought to be where Scotland’s ancient kings were crowned.