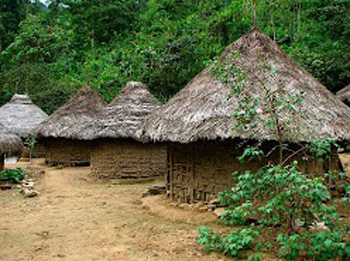 Our group grabs the packs from the top of the Jeep’s rusty roof before we set off for Colombia’s Lost City. We watch the jeep disappear down the muddy road. It’s the last sign of civilization we’ll see for a week. Our guide, Tunyi, begins the six-day trek by telling us about eight tourists who were kidnapped on September 15th, 2003 by the National Liberation Army (ELN) on the same trail we are taking. “Three months they held them captive,” he tells us. “They were lucky to be released.” The three Australians in our group find this funny while the two boisterous Russians become quiet and pensive after I translate this bit of information for them. Perhaps Tunyi should have started by pointing out the names of some native fauna.

After this incident, tourist treks to the city closed until 2005. Though an air of danger still lurks on the forbidding trail, Colombia’s army now patrols the path, and according to our guide, robberies are less frequent than they used to be.

Within the first hour, we pass a small group of soldiers wielding semi-automatic weapons. The Russians seem especially agitated by the troops and they request in broken English that I ask our guide in Spanish what their purpose here is. 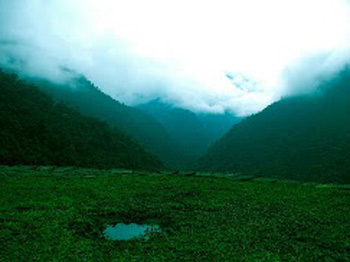 We venture into Colombia’s Sierra Nevada mountain range, along narrow and seemingly impossible trails drenched in saturated air. After a few hours, we have crossed the same river a dozen times, as it snakes along our difficult path.

The jungle canopy offers no relief from the ruthless heat. I am shocked at the volume of sweat pouring from my skin. I realize way too late that I’ve over-packed by about thirty pounds. My eighty-liter pack dwarfs everyone else’s diminutive daypacks. Dave Forester Wallace’s eleven-hundred-page novel, Infinite Jest, ranks at the top of my poor packing decisions. After a one stretch of trail leading forever up an impossible incline, I consider ditching the book.

The trail is exhausting, but it is the exhaustion we have paid for. We came to feel our shoulders ache, our feet blister, and our sweat pour. We came for that little voice in our head that says, “you can do it,” to a skeptical body. Unlike the less strenuous treks to places like Machu Picchu trail, there is no bus option here. Barring helicopters, the only way to get to The Lost City is along an ancient trail once used by Tayrona Indians.

Teyuna, as the Tayrona originally called the city, was “found” in 1972 by treasure hunters. At the time, its location was already widely known to tribes living in the area. Founded possibly as far back as 800 A.D., at its peak, it is believed to have been home to about 10,000 Tayrona. Unlike many of the magnificent ruins dotting Latin America, The Lost City is not just a story of what once was, but the story of what still is. Along the way, our trail leads us through small villages inhabited by the Kogis, the blood descendants of the city’s founders. They are still living in the same wild, romantic way of their ancestors.

As cautious outsiders, we watch the inhabitants of these villages as they herd their children inside the huts while we pass, commanding them in one of the 100 dialects of their still-intact ancient language—a language they are reluctant to share with the eager anthropologists who come to study their way of life.

After eight hours, we reach the place where we will be spending our first night, under a thatch roof, hanging in hammocks. Our guides serve us a dinner of chicken, rice and fried plantains. But my hunger is such that high-school cafeteria food would have tasted divine.

The Russians, who initially were worried that they might not be able to fall asleep in a hammock, quickly find out that after a day of trekking on trails like this, sleep is inevitable and intensely restful. 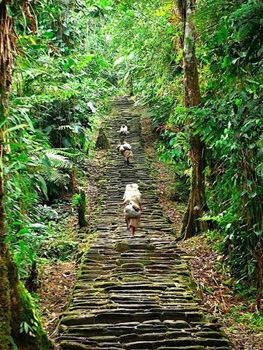 Either the second day is easier than the first, or my body simply has given up on feeling pain. I learn from our guide that all the villages along the way are part of one tribe, and that once a year in February they have a month of celebration in which they meet to drink fermented fruit juices and perform various rituals.

A few hours into the hike, Tunyi stops to show me a coca plant. He points off into the jungle to where he says he knows of a cocaine factory several kilometers off the trail. United States drug aerial fumigation is banned in this area, making it an ideal place for illicit activities. He tells me that on the way back, for twenty-dollars, he knows someone in the factory who will give me a tour. Apparently even the drug business wants tourism dollars these days.

When we pass through another village, he tells me that a Tayrona bride will spend her wedding night with the chief before having relations with her husband so that she can be taught how to love. It sounds like a good gig. I ask jokingly how I can become a Tayrona chief, only to be solemnly informed that because I am a gringo, I would never be allowed into the tribe.

In the afternoon on the third day, we cross the river for the last time and see moss covered stone steps tucked away under the foliage. These are the beginning of a stairway of over 1,200 steep steps leading straight up the mountain to The Lost City. Before my foot falls on the first step, a Kogi, dressed in his traditional white garb, emerges from the steps and ignores me as he disappears into the jungle. I look at the prints his bare feet have left in the mud. My heart jumps and I see meaning spanning a thousands years in those footprints. 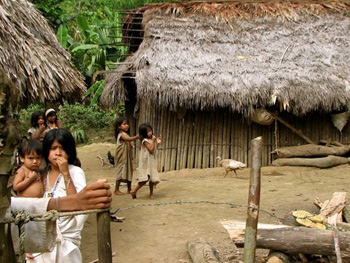 With my pack weighing me down on the slippery stairs, I almost fall several times, a mistake that could have disastrous consequences in this remote area. The stairs are by far the most difficult obstacle yet. Aching legs are being commanded up narrow stairs cutting into the steep mountainside. My cardiovascular system demands rest, but I ignore its plea. This has become my Mecca, and I vow to make it up in one uninterrupted jaunt.

Heaving, I reach the top more exhausted than I remember ever feeling. Surrounded by ancient stonewalls, I have attained the sky—the ancient stomping grounds of the Tayrona. A waterfall can be seen on an adjacent mountainside flowing, it seems, from the clouds. With my mind’s help, I see much more than stones and a stunning view. I imagine answers to questions we may never know.

Where did the inhabitants of The Lost City go? Unlike many other ancient cities, the Spanish never came here. As the conquistadors settled around the Caribbean coast, the people here simply left and were never heard from again. Some speculate that the direct descendants of the city’s inhabitants are still thriving somewhere in a distant, undiscovered jungle haven. 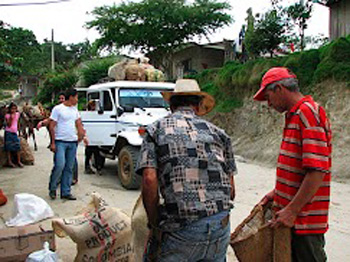 How the city was built is another mystery. From samples of the rocks, archeologists have concluded that some sort of acid was used to cut perfectly shaped blocks. Because of a potential commercial value, jungle plants have been collected in throngs to find the acid, but it, like the city’s inhabitants, seems to have disappeared into the jungle forever.

Our group spends the night in hammocks atop the city in quiet contemplation. We are alone to pass the night here, something unheard of in similar sites across Latin America. The ancient city seems to have given everyone a lot to think about. For all of us, it is much more than stacked stones on a mountainside. It has made us all nostalgic for a world we have never known.

Despite civilization’s rush to map every corner of the world, this city remained hidden from The West for Centuries. Some speculate that deeper in the jungle are other such cities, hidden from the discovered world. A few people will tell you that there are other cities like this out there that are still inhabited with people living a way of life lost to progress.

Looking out in the jungle I wonder how much of this will prove true, and how much of it is lore created from our hope for the lost, forbidden things that we want to still find.

What to Bring:
A good pair of shoes, several pairs of socks, long pants, shorts, a t-shirt, a jacket or sweater, and a water bottle. The guides will carry in the food for you and the river water is safe to drink. Even if it does not rain, expect your perspiration to soak your clothes within minutes. Hammocks are provided for you, but if you are sensitive to the cold, you will want to bring a blanket or sleeping bag.

How to get there:
Going without a guide to the city of Gotsezhy (Ciudad Perdida) is strictly prohibited and you must book a tour with one of the two companies authorized to bring groups: Turcol Travel Agency or Sierra Tours. Both have offices in Santa Marta and Sierra Tours has a second office in the dive town of Taganga. For the six day guided trek, both companies charge about $240.00.

Where to book a tour:
Sierra Tours is more sensitive to making the Trek eco-friendly and respecting the local tribes along the way. In Taganga: Calle 17 1-80. In Santa Marta: Calle 22 16-61. All tours are conducted in Spanish.