“The most theoretical and intentional town on the whole terrestrial globe,” wrote Fyodor Mikhailovich Dostoyevsky about St. Petersburg, Russia, where he lived for about 30 years and had written his most famous novel, Crime and Punishment. [1] Despite his dislike of the city, he became the symbol of literary St. Petersburg and created his own city, “Dostoyevsky’s Petersburg,” occupied by characters of his novels and novellas.

Born in Moscow in a nobleman’s family, Dostoyevsky came to St. Petersburg in 1839 to study as a cadet of the Main Engineering School opened in a former royal residence, the Mikhailovsky Castle (or the Engineers’ Castle). Dostoyevsky was not excited about his future career in engineering, which his father chose for him. According to a supervisor from the Engineering School, young Fyodor was more passionate about literature than about science or entertainment: “In the dead of night we could see F. M. at the table, sitting and working.” [2] Dostoyevsky was definitely not in his elements either in the Engineering School or in the city’s center where the school was located. No wonder that some of his characters shared the writer’s detest for the imperial capital! For instance, the protagonist of Crime and Punishment, Rodion Raskolnikov, observing a magnificent view of palaces and cathedrals, “always marveled at a vague and mysterious emotion it roused in him. It left him strangely cold.” [3]

I visited the Engineers’ Castle, which has been restored as a royal residence and turned into a museum, but nothing there reminded of a cadet Dostoyevsky. Although he graduated from the school as a military engineer, he soon resigned to dedicate himself to writing. Nevertheless, the training received by Dostoyevsky in the Engineering School influenced significantly his literary work: he was obsessed with precise details and populated buildings in his neighborhoods with his fictional characters. The writer’s emphasis on particulars helped me to discover a part of “Dostoyevsky’s Petersburg” – places described in Crime and Punishment.

The novel’s opening gave me the address of Raskolnikov’s house: “On an exceptionally hot evening early in July a young man came out of the garret in which he lodged in S. Place…” [4] Although Dostoyevsky often used only first letters of names of streets and bridges, after his death his widow Anna deciphered these letters, providing references to real places. Thanks to her, I know that I need to go to Stolyarny Lane in the neighborhood of the Sennaya Square. 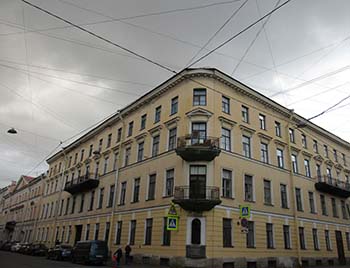 I found Raskolnikov’s house, a big yellow apartment building, on the corner of Stolyarny Lane, 5, and Grazhdanskaya Street, 19. This rectangular structure with an inner yard has been built according to a typical architectural design of the 19th century: since the land was expensive, architects had to create the biggest possible house to occupy the lot. In 1970s, after remodeling, this “high, five-storied house” described by Dostoyevsky was turned into a four-storied one. [5] However, there is still the loft where Raskolnikov rented a room: “It was a tiny cupboard of a room about six paces in length … and it was so low-pitched that a man of more than average height … felt every moment that he would knock his head against the ceiling.” [6] The entrance to the house is locked to prevent tourists and literary journeys’ lovers, like myself, from disturbing the tenants. 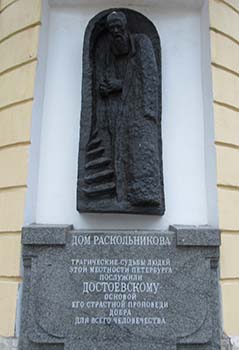 As I walked around the house, I saw the commemorative high relief of Dostoyevsky and the plaque with the inscription: “Raskolnikov’s House. The tragic lives of people of this neighborhood of Petersburg served for Dostoyevsky as a foundation of his passionate sermon of goodness for the entire humanity.” [7] There is an interesting tradition in St. Petersburg: on the first Saturday of July (events described in Crime and Punishment happened in the beginning of July), Dostoyevsky’s enthusiasts gather in this neighborhood to celebrate Dostoyevsky Day. Many bring flowers to place at the bottom of this relief, but some put here … axes, because Raskolnikov used an axe as his murder weapon. (Another reason for tenants of this house to keep the entrance door locked!) 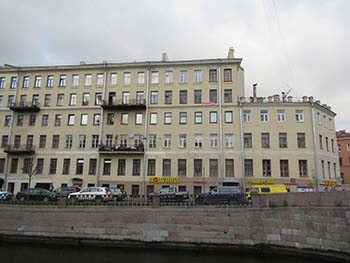 After having found the house of the murderer, I need to find the house of his victim, an old woman, a notorious pawnbroker Alyona Ivanovna. The book presented her dwelling place as “a huge house which on one side looked on to the canal, and on the other into the street.” [8] The building fitting this description is located on the Griboedov Canal Quay, 104: one long side stretches along the Griboedov Canal, another – along Srednyaya Podyacheskaya Street, and the short side looks into Rimsky-Korsakov Street. Dostoyevsky gave another key for locating the old woman’s house – the number of steps that Raskolnikov made while walking there: “He had not far to go; he knew indeed how many steps it was from the gate of his lodging house: exactly seven hundred and thirty.” [9] Dostoyevsky, as a military engineer, was used to measuring distances in steps, and, knowing his obsession with precise details, we can presume that the writer gave us the correct number of steps.

The old woman’s house is a yellow apartment building which resembles Raskolnikov’s house. The old pawnbroker lived on the 4th story, and her windows looked into the inner yard. Today the entrance to the house and the yard are off limits for tourists, so I only could walk around the building. The house is protected by the government because a playwright Griboedov (whose name is given to the canal) lived here, and there is a memorial plaque dedicated to him. Yet for the majority of Russian literature’s admirers, this building is, first of all, the crime scene of a well-known fictional murder. Raskolnikov explain the reason for his crime: “I wanted to become a Napoleon, that is why I killed her.” [10]. After murdering the old woman, his intended victim, he killed her sister Lizaveta, his incidental victim, and this double murder tormented profoundly Raskolnikov’s mind and soul: “Did I murder the old woman? I murdered myself, not her!” [11]

I continued my literary journey to the Sennaya Square, another important place described by Dostoyevsky: in the novel’s beginning, here Raskolnikov learned when the old woman would be home alone and decided to use this opportunity to carry out his murder plan; at the novel’s end, here Raskolnikov tried to confess his crime publicly: “He knelt down in the middle of the square, bowed down to the earth and kissed that filthy earth.” [12]. 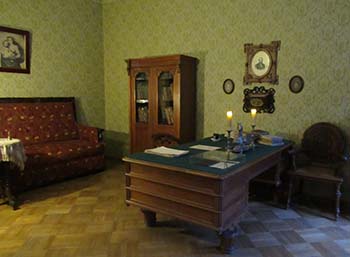 Now I had to take the subway to reach the Dostoyevsky Museum located on Kuznechny Lane, 5. Dostoyevsky rented twice apartments in this building: in 1846, at the beginning of his literary career, and in 1878, three years before his death. The main attraction of the museum is Dostoyevsky’s cabinet where he had written his novel Karamazov Brothers. On the massive desk there is an issue of the magazine, Russky Vestnik, with an extract from Karamazov Brothers, Dostoyevsky’s letters, and one of his favorite novels, Eugene Onegin by Alexander Pushkin. Everything on the table is at the particular place because the writer “paid a great attention to this pedantic order” [13]. There are two candlesticks with candles because Dostoyevsky disliked table lamps and preferred to write by candlelight. Since the writer worked a lot, being constantly in dire need for money because of his gambling problem, he often slept in his cabinet on the sofa. Above the sofa there is a reproduction of Dostoyevsky’s favorite picture, “The Sistine Madonna” by Raphael, presented by Sofia Tolstoy (Leo Tolstoy’s wife). Anna, Dostoyevsky’s widow, wrote: “How many times, during the last year of Fyodor Mikhailovich’s life, I found him standing in front of this great picture in such a deep adoration that he did not hear how I had entered.” [14] On February 9, 1881, Dostoyevsky died on the sofa in his cabinet. 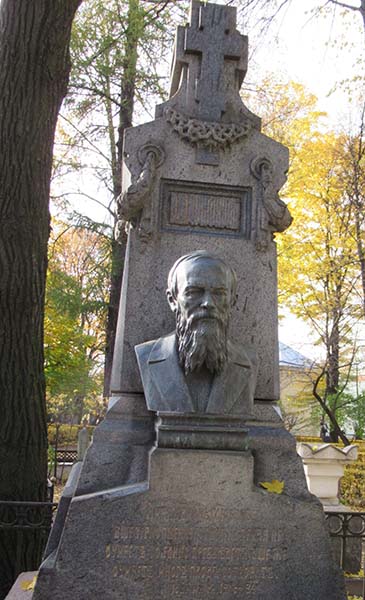 Dostoyevsky was buried at one of the most famous cemeteries of St. Petersburg – the Tikhvin Cemetery at the Alexander Nevsky Monastery. The tombstone consists of the Orthodox cross and Dostoyevsky’s bust placed on two books. The cross is adorned by a garland of thorns symbolizing the writer’s sacrifices and hardships. The bust bears a resemblance to the writer because Dostoyevsky’s death mask was used for its creation. Two books, representing two parts of the Bible, symbolize his devotion to the Russian Orthodox Church; additionally, books symbolize his literary career. The tombstone’s inscription in Old Church Slavonic language is a quote from John 12:24: “…unless a grain of wheat falls into the ground and dies, it remains alone; but if it dies, it produces much grain.” This tomb is one of the most visited, and it is often adorned with fresh flowers.

My one day literary journey in Dostoyevsky’s footsteps was completed. I learned more about another, no so glamorous, side of my home city – and I wish that more visitors would deepen their experience here by discovering “Dostoyevsky’s Petersburg!”

The Mikhailovsky Castle (the Engineers’ Castle) is located on Sadovaya Street, 2. Adult tickets cost $5.50 per person.

The House of Old Lady Pawnbroker – The house is located on the Griboedov Canal Quay, 104. The easiest way to find it: get out at the subway station Nevsky Prospect, cross the Nevsky Prospect, and walk along the right side of the canal.

The F. M. Dostoyevsky Museum – The museum is located on Kuznechny Lane, 5, near subway stations Vladimirskaya and Dostoyevskaya. Adult tickets cost $5.50 per person. You can make photos but without using a flash.