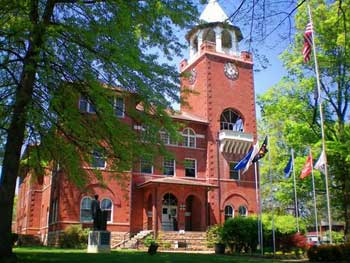 Over twenty years ago, I drove over an hour each day to work as a librarian at Rhea County High School, which is located about ten miles from Dayton, Tennessee. As it was such a long drive to and from work, I never really visited Dayton, even though I knew it was a famous place that had even had a movie made about it many years ago. I decided recently that it was time to go to Dayton as a tourist and found it to be a unique little town that is preserving its historical heritage. I turned off Tennessee Highway 27 in Rhea County at the entrance arches and lampposts marking Dayton as a Historic Main Street Community, one of twenty-two such designated communities in the state of Tennessee. Just inside the entrance is the Chamber of Commerce. I stopped there and found a pamphlet with a walking tour of a six block downtown district with historical places marked with Appalachian Quilt Trail Stars. 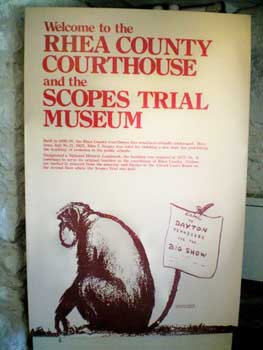 The Columbian Star is number one on the trail and is the most impressive place on the tour, the Rhea County Courthouse at 1475 Market Street. The Courthouse was built in 1891 and designated as a National Historic Landmark in 1977. Still operated as a courthouse, it also houses the Scopes Trial and Rhea Heritage Museums with exhibits, photos, and news clippings of the famous trial. Dayton won its place in history when William Jennings Bryan and Clarence Darrow argued the question of evolution and creation in the Scopes Evolution Trial which took place at the courthouse in July 1925. We’ve all heard about the trial and may have seen the movie, “Inherit the Wind,” that was made about it, therefore, it is interesting to tour the museum and think about that hot summer many years ago and the debate about the origin of man which continues even today.

One artifact found in the Scopes Museum is the original table from Robinson’s Drug Store at which the decision was made on May 15, 1925 by a small group headed by Earle Robinson, “The Hustling Druggist,” and George Rappleyea, Superintendent of Dayton Coal & Iron Company, on a plan that appears to have been a publicity stunt. They “conspired” with John Thomas Scopes, a young science teacher at Rhea County High School, to provide a court test case of the statute passed in March 1925 by the Tennessee Legislature making it unlawful for a public school teacher to teach any theory denying the Biblical story of divine creation “and to teach instead that man descended from a lower order of animals.” The interest and resulting world-wide publicity surprised even the planners. Press coverage of “The Monkey Trial” perhaps exceeded any event up to that time. A new device called radio was used to report the heated debate between the famous lawyers in one of the hottest Tennessee summers on record. 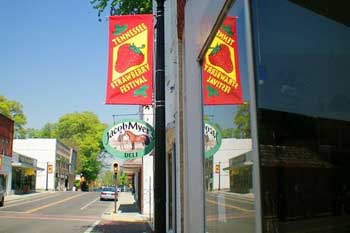 The second star on the tour is at 1435 Market Street. It was the second location of Robinson Drugstore. Built in the early 1900’s, it is currently home to The Gathering Place, appropriately named, as Robinson’s being a favorite gathering place for local citizens in the 1920’s seems to have been key to the whole Scopes trial. The Gathering Place is now an antique and gift store.

I had a cup of potato bacon soup and a hot apple dumpling with vanilla ice cream for lunch at Jacob Myers Deli on the corner of 1st and Market. They also have sandwiches, an espresso bar, and other soups and desserts. On the same block as Jacob Myers, I found the Bright Star Quilt designating a building that was originally a hardware store, now home to ArtCrafters. Reporters covering the Scopes Trial stayed upstairs in that building. There are nine star quilt blocks on the tour, and with plenty of free parking, one can drive instead of walking.

May is the month that strawberries ripen and strawberries are another aspect of Dayton’s history. The town has been celebrating every May since 1947 with the Tennessee Strawberry Festival. The event is named in honor of the county’s reputation as the “Strawberry Capital of the World” in the early 1900s when the plentiful fruit was sent across the country in rail cars. At its peak, over four million quarts of the fruit were produced each year. Unfortunately, the berry boom had died by the forties, but that was when the Dayton Lions Club sponsored the first one-day strawberry festival as a community booster and tourist attraction. While having its ups and downs, the festival has continued and grown to a multi-day celebration every May. 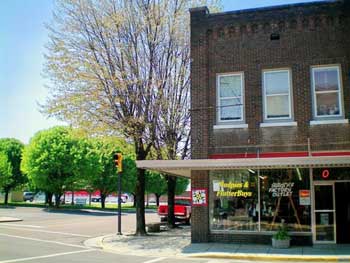 The strawberry is far from Rhea County’s top crop, but the Dayton festival has preserved its heritage as the place for strawberries. Most of the berries for the event are furnished by Tidwell’s Berry Farm, the only large scale berry farm in the county. According to a Herald-News story, Ray Tidwell started his tiny farm near Spring City in 1983 growing corn and soybeans, but the farm flopped. An agriculture extension agent suggested he grow strawberries. At the time, there were only three acres of berries growing in the county. Doubting it would work, Tidwell gambled on the berries and it paid off. He now harvests 16 acres, each yielding about 20,000 pounds of strawberries. Tidwell doesn’t ship his berries across the country, but has turned his name into a popular regional brand. About 80 percent of his crop is sold from a shed at the farm on Hwy. 27, about 14 miles north of Dayton. If you can’t make it to the festival, you can still drive to Dayton during strawberry season to follow the town’s history with the Appalachian Quilt Block Stars and stop at Tidwell’s to buy fresh strawberries on your way home.

The City of Dayton is the county seat of Rhea County, Tennessee, which is located in East Tennessee. It is 30 miles north of Chattanooga, 50 miles southwest of Knoxville, 154 miles southeast of Nashville, and 151 miles north of Atlanta.

The Scopes Trial and Rhea Heritage Museum is open Monday through Friday 9 am to 4 pm. Admission is free.

About the author:
Melanie Harless began writing after retirement in 2006. She writes a column on regional travel for a local news-magazine. In addition to travel writing, she writes creative non-fiction, short stories and poetry. She has been published in anthologies and online and print magazines and newspapers. This is her second contribution to Travel Thru History.