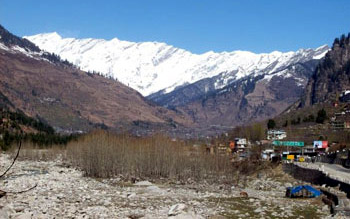 When most people think of images of India, few bring pictures of green mountain meadows and snow-capped peaks to mind. Delhi’s narrow Pahar Ganj, with its rickshaws, dirt, street-sellers and con men is probably much closer to many people’s visual concept of India. I was staying in a windowless room at the end of a busy alleyway off Pahar Ganj, past an open-air urinal, and I was desperate for clear air and wide views. 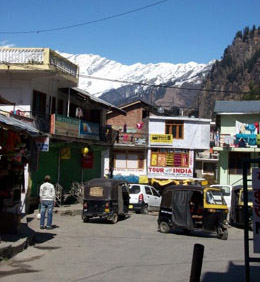 I booked myself onto an overnight bus, barely sleeping through a cold night on winding roads, waiting for the dawn to break. When it did, I watched us pass through villages and market towns, women hurrying through the morning wrapped in thick shawls, men drinking steaming tea at roadside shops, children bright-faced with cold and smiling, all backed by green slopes and snowy peaks. This India looked very different to the hot plains I knew.

I left the bus at Manali, sloshing through a muddy bus station. This was New Manali – the town’s administrative and transport hub. Beyond it, along a winding, tree-lined road was the village of Old Manali, and I found a guesthouse along the road between the two. As this was off-season, I got a large room with a balcony and hot water for next to nothing. The only other customers I saw were an Indian couple from Bangalore; come up from the south to marvel at this very different landscape, where white peaks come into view around every turn.

According to the Lonely Planet, I could go skiing at Solang Nullah, an hour’s bus ride away from Manali, between January and March. It was late February, but there was no snow on the ground in Manali, so I went to the tourist office to see if I could find out about the state of the slopes. 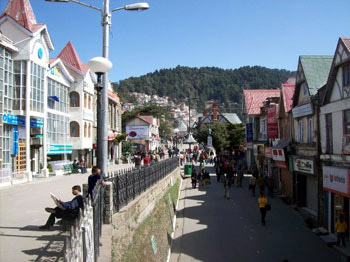 “Is there snow in Solang?” I asked.

“Oh yes, Madam, there is much snow there” the man working there said, nodding fast.

“Oh yes Madam, it would be your duty!”

Encouraged, I got the bus the next morning, its engine choking and shaking through the cold. The road to Solang was lined with shacks renting ski gear – all in one ski suits designed with true 1980s style, and skis that looked as if they’d creak at each turn down the slope. We pulled up at Solang Nullah, and despite the inviting looking white-stuff on the high slopes in the distance, Solang itself had nothing but wet mud and frost. I went back to Manali on the same bus, and booked a bus to Shimla. 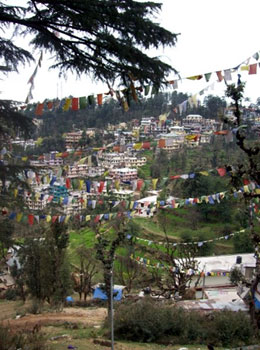 The summer capital of the British Raj, Shimla is strung out along a high, green ridge, overlooking deep valleys covered in trees. Its streets are stepped like rice terraces, connected by steep staircases. The buildings are all oddly familiar in Shimla – bay-windowed houses with chimneys and pointed roofs, the Raj’s version of home, tumbling down the mountainside. There are two Shimlas – the Indian town, a steep warren of shops and stalls, and the European town, with broad buildings spread out around a wide boulevard, and into the trees on the edge of town.

Walking out of Shimla, you pass the ghosts of the Raj. Grand houses and large public buildings still used by the government, workers on their break playing cricket in their gardens. The road is plagued with monkeys, who shriek and claw their way across the tarmac and through the trees, made aggressive and bold through too much feeding. I had been trying to find a museum, but lacking any kind of stick to beat them off, I thought it was better to escape the monkeys and turn back towards town. 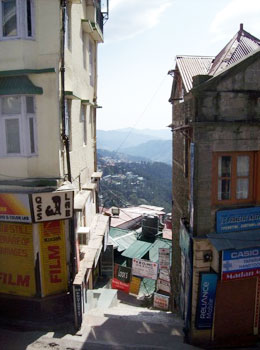 Having had my fill of Shimla’s ghostliness, I got another bus to Dharamsala, home of the Dalai Lama. Dharamsala itself is a bustling but unremarkable mountain town, but above it is McLeod Ganj, seat of the Tibetan government, and with a population of mostly Tibetan refugees and western tourists. Many of them come to take Buddhist meditation classes, or to hear one of the Dalai Lama’s teachings. I came to eat Tibetan food, try out the hospitality in Tibetan bars, and gaze at the views over the valley, of rocky villages and strings of colourful Buddhist prayer flags.

I spent a happy few days here, doing very little but enjoying the freedom of the mountains. I went for walks, alone, up mountain roads, through tiny villages, and was almost totally ignored. I drank hot tea and cold beer, ate cake and Tibetan flatbread, and stared out of a lot of windows, watching the clear Himalayan light rise and fall. I could have been back in Delhi on one bus ride, but I couldn’t have felt further away from it in Dharamsala.

About the author:
Alice Cuninghame is a freelance copywriter based in Brighton, specializing in travel. She has traveled extensively, particularly in India and South East Asia. She has recently completed an MA in creative writing and is working on her first novel. She also works for diyflights.com, a powerful flight search website to compare flights from over 500 airlines across the world.

All photographs are by Alice Cuninghame.