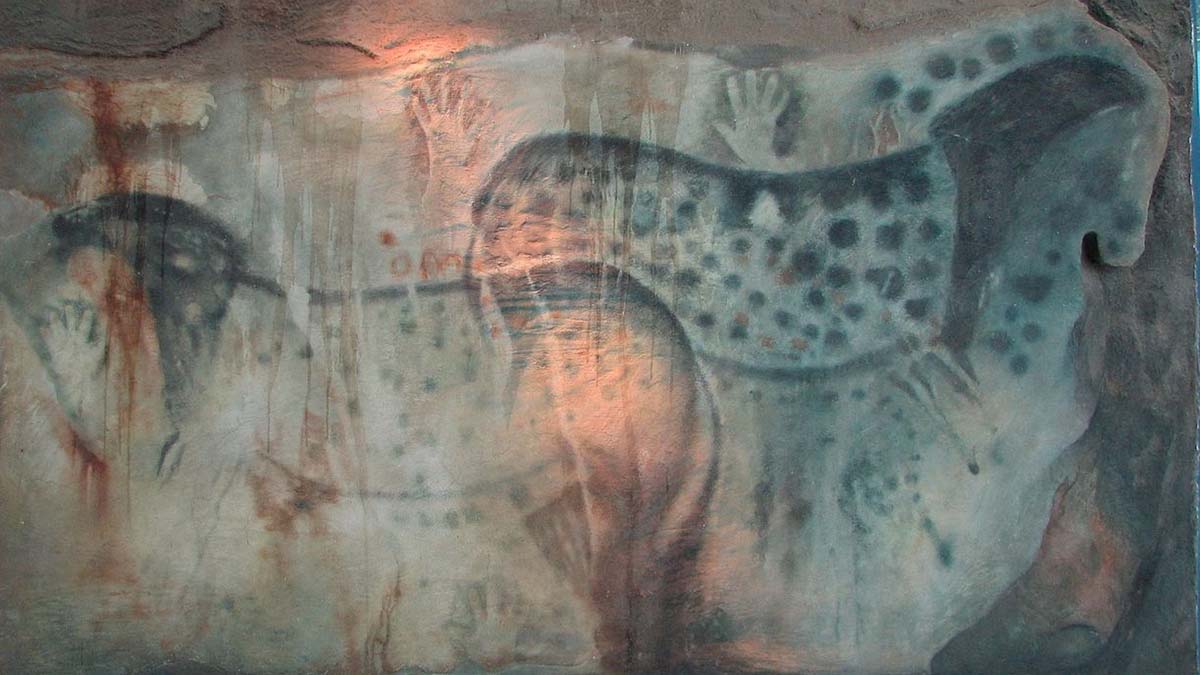 Over 25,000 years ago, somewhere in the Pyrenees region of France, cave-dwelling men and women artistically painted graceful murals of spotted horses on cavern walls. Using materials such as wooden sticks and pigment from charcoal and iron oxide, they drew and colored flowing pictures of a variety of mammals, some of which are now extinct.

Now known as the Pech Merle cave, it is one of a handful of cave painting sites in France that are still open to the general public. Other cave paintings of spotted horses have been found in Lascaux, France and Altamira, Spain as well as many other places throughout Europe. 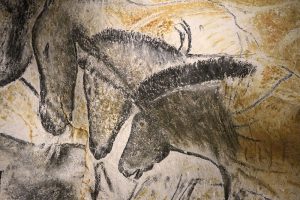 The prehistoric spotted horses of Pech Merle – white horses with dark spots – are sometimes referred to as “dappled horses” because of the spots or patches of color on the horses: They are very similar to the leopard pattern seen in Appaloosas today. It is characterized by a few white spotting patterns on the rump to horses that are almost completely white with pigmented oval spots known as ‘leopard spots.’ At first blush, the connection between early spotted horses and modern-day Appaloosas appears uncanny.

However, up until about a year ago, archaeologists and scientists were divided about what the spotted horse sketches actually represented and whether these spotted horses were related to the Appaloosa. Did the dappled horses represent mystical creatures conjured up during lucid dreaming? Were the cave paintings symbolic images with some religious significance or purpose for these ancient cave dwellers? Or were the spotted equine simply realistic drawings of man’s prehistoric environment?

Some researchers were adamant that a spotted coat phenotype from the Paleolithic period could not have existed; rather it could only have evolved through mutation over the centuries. After all, previous ancient DNA studies only supported the existence of bay and black horses. Why then the cave paintings of spotted horses?

A team of researchers from the UK, Germany, USA, Spain, Russia and Mexico set out to find the answer. By genotyping and analyzing coat color from ancient bone and teeth samples of 31 pre-domestic horses from Siberia, the Iberian Peninsula, and Eastern and Western Europe, they found that there was a shared gene present associated with leopard spotting. The conclusion: Spotted horses existed in Europe over 35,000 years ago.

Professor Michael Hofreiter, an evolutionary biologist from the University of York in England, noted: “While previous DNA studies have produced evidence for bay and black horses, our study has demonstrated that the leopard complex spotting phenotype was also already present in ancient horses and was accurately depicted by their human contemporaries nearly 25,000 years ago.”

Spotted Horse Through the Ages

Artwork also documents the fact that domesticated horses with leopard spotting patterns existed as far back as Ancient Greece, Persia, and the Han Dynasty in China to early modern period. By the 11th century, spotted horses were depicted in French art and in England they appeared in artwork by the 12th century. French paintings from the 16th and 17th centuries depict riding horses with spotted coats and spotted coach horses that were used by the French court of Louis XIV.

By the mid-18th century in Europe, European royalty and nobility clamored for “spotted horse” gene stock – that is, until it became common. Once that happened, the no-longer-fashionable spotted horses were readily surplused and shipped to the New World. Spanish conquistador and explorer Hernando Cortez was also known to bring a lone spotted horse with snowflake patterning to the New World. Others would follow.

The Nez Perce and the Appaloosa 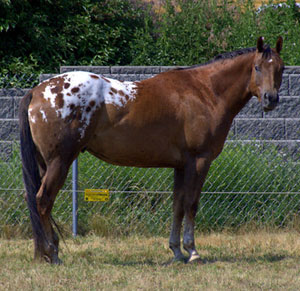 By 1680, the year of the Pueblo Revolt in New Mexico, horses spread rapidly through the plains and prairies of North America, probably reaching the Northwest around 1700. And the Nez Perce tribe, long known for their dog-breeding skills, quickly adapted to the horse, harnessing it as an invaluable aide in hunting buffalo. Because of the horse’s speed, they were able to cover more territory in less time and thus extend the expanse of their hunting grounds. Life was good and meat became more plentiful as a result.

Soon they captured escaped spotted horses and cross-bred them with wild mustangs, producing a stunning white horse with leopard spots. Since the Nez Perce lived near the Palouse River, these horses were first known as the “A Palouse” which later became the Appaloosa. They continued to selectively breed the horse for speed, strength, stamina, agility and docility. Because of these traits along with the horse’s innate intelligence and beauty, the Appaloosa became highly prized throughout the high plateau country, creating great wealth for the Nez Perce. (It is estimated that about one in ten Nez Perce horses were spotted.) 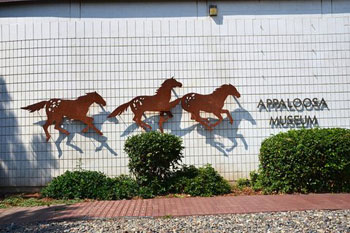 Over the following years, Chief Joseph of the Nez Perce found that his tribal homelands were increasingly encroached upon by white settlers, despite signed treaty promises to the contrary. Rather than continue to fight against overwhelming odds, he mustered a band of his people consisting of several warriors, elders, and many women and children, embarking on a 3-month, 1,170 mile journey to sanctuary in Canada.

The hardy and spry Appaloosa horse helped his weary band evade the U.S. 7th Cavalry, but the toll was heavy in terms of human casualties. With many of his warriors dead and the rest of tribe cold and starving, Chief Joseph had no choice but to surrender to overwhelming force when he was only 40 miles from the Canadian border. The year was 1877. His famous words still resonate: “From where the sun now stands, I will fight no more forever.”

When Chief Joseph and his haggard followers gave up the fight, the cavalry rounded up more than 1,000 of the tribe’s horses, selling what they could and shooting the remainder. Some animals escaped and some were abandoned, with a significant population of horses having been left behind in the Wallowa Valley due to a hasty retreat. Perhaps fearing the indomitable qualities of the Appaloosa, a federal law remained on the books until 1935 that prohibited the breeding of Appaloosa to Appaloosa.

After the infamous slaughter of the Appaloosa, they unfortunately became a forgotten breed. That is, until 1937. Concerned about losing the genetic stock of the American Appaloosa forever, the Western Horseman ran an article on the Appaloosa, appealing to the public to preserve and improve the Appaloosa breed. By 1938, the Appaloosa Horse Club was chartered. 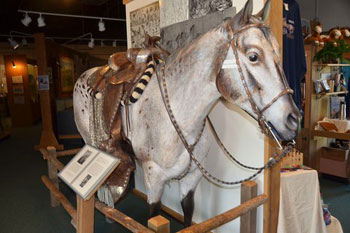 Nowadays, the Appaloosa horse breed is enjoying a resurgence in popularity and can often be seen exhibited at county fairs along with their young mounts. Besides being popular with young horse riders, Appaloosas are also used as working ranch horses and trail horses. The Appaloosa Horse Club, an international breed registry, has records of more than 635,000 Appaloosas and 33,000 members. The horses excel in many competitive events, including racing, jumping, dressage, reining roping gaming, pleasure and endurance.

By 1975, the Appaloosa was named the official state horse of Idaho in recognition of its integral part of Idaho history. In Florida, an Appaloosa serves as a mascot for the Florida State Seminoles. Finally, the Appaloosa bloodlines have influenced other breeds including the Pony of the Americas, the Nez Perce Horse, and several gaited breeds.

The Appaloosa Museum & Heritage Center in Moscow, Idaho is located on Highway 8, just over the border from Pullman, Washington. Established in 1975 in the heart of Palouse prairie lands and rolling hills, the Appaloosa Museum pays tribute to what was once the home of the Nez Perce Appaloosa.

Today, the non-profit museum is dedicated to collecting, preserving, studying, and exhibiting artifacts and data about the history of the Appaloosa horse and its region of origin.

It is also home to the Appaloosa Horse Club (ApHC), an organization that serves as the international breed registry for the Appaloosa “by recording and preserving the horses’ heritage and history.” The ApHC is dedicated to promoting, enhancing and improving the bloodline characteristics of the Appaloosa by focusing on preferred characteristics that include the coat pattern. The club actively supports competitive and non-competitive events. If visiting during the summer, be sure to see the outdoor Appaloosa exhibit that runs from mid-May to mid-October. Here you will find shade trees and picnic tables along with benches, perfect for admiring the two stately Appaloosas grazing nearby behind a fenced corral.

Hours are 11 a.m. – 4 p.m. Monday through Thursday and 10 a.m. – 4 p.m. on Fridays and Saturdays.) Admission is free though voluntary contributions are happily accepted. Suggested donation is $2.00 per person.

About the author:
Karin Leperi is an award winning writer and photographer with bylines in over 75 publications that include print, broadcast, and internet media. A gypsy at heart who particularly enjoys bucket-list experiences, she has traveled to 80 countries and is still counting. Specialties include travel, culture, cuisine, nature, adventure and lifestyle. Her photo website is: www.travelprism.com.