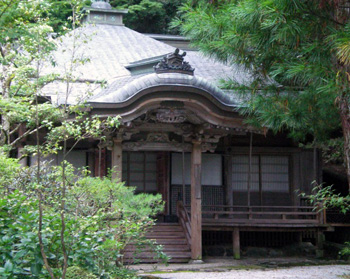 At the tail end of a Japanese summer, my daughter walked hand-in-hand with the Kobo Daishi, a monk who has spent the last thousand years waiting for the Buddha of the Future. 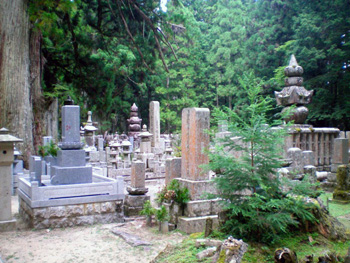 Dusk fell as we wound through a cypress grove filled with some half a million graves. The faithful have been buried here since the Kobo Daishi died in 835 AD. Famed as a poet, painter and calligrapher, and for bringing Shingon Buddhism to Japan, the Kobo Dashi is of the most revered figures in Japanese history. He sits in repose in his mausoleum, the Oko-in, where monks still bring him food twice a day.

A mist rolled down from the mountains, bringing with it a sea of mosquitoes; we beat a hasty retreat, postponing enlightenment until daylight.

Sacred even before the Daishi established his monastic retreat here in 816, Koyasan is only two hours by train from Osaka. Speeding through the city’s outskirts, the futuristic landscape morphed into a maze of alleyways and traditional wooden houses, with vegetable plots and tiny rice paddies filling every spare space. Then the land opened into farmland, with the occasional dots of a village or even a small town.

The train came to an unexpected stop, and as everyone else melted into the countryside we were left standing on a deserted station. We dripped with sweat. Farmers with conical straw hats worked fields cultivated for centuries. It was a scene lifted straight from the anime of Hayao Miyazaki (famous for classics such as Spirited Away and My Friend Totoro).

Fortunately, a train arrived before we had emptied the ubiquitous vending machine of offerings. As the land climbed, the summer heat faded. Fruit trees heavy with blossom became primeval forests of pine and cypress. At Gokuraku-bashi Station, (where the train-line ends), monks, pilgrims and tourists alike were ushered into a cable car; it leapt into a wall of green, carrying us to the top of the Holy Mountain.

Buses transport everyone to the centre of town – including the monks with their robes of black covered with saffron shawls, for walking from the station is forbidden. The road pottered through the trees, its edge marked by moss-covered rocks. Everything held the colour of dark moss or grey stone; the trees, the road, the view down the mountain, even the air. As a result everything looked a little hazy, as if we saw things from a distant, slower time.

Despite both its age and being listed as a World Heritage site, Koyasan remains a lively mix of Buddhist monasteries, sun-drenched cypress groves and school kids running past workshops on their way home. In the main street stand supermarkets, restaurants, ceramic shops, even a chemist to sell sunblock and mosquito repellent. (The lady in the tourist office kindly wrote the names in Japanese for us, as the pharmacist spoke no English. His shop was filled with all manner of bottles housing dried flora and fauna.) 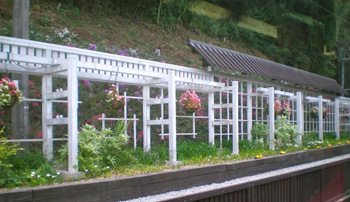 The journey with the Kobo Dashi begins at a stone basin. Ubiquitous to Japanese temples, these basins overflow with running water, usually from a nearby stream. After ladling icy water over our hands, we bowed on crossing the graceful Ichinohashi Bridge; the Kobo Daishi then joined us. A lady in the shop opposite smiled and waved. The path then winds through the Okunoin, a grove of cypress and tombs. Tiny tracks stray from the main walkway, leading to even more tombs hidden in dells and forgotten grottos. The only sound was the chirping of crickets, or the ring of bells as white-robe pilgrims passed. Many of the tombs are simple stone plaques or wooden markers; others are the enormous mausoleums of shoguns. Animal shaped stones are popular, often with red cloths or little aprons tied around them.

Moss has eroded many of the markings. Shafts of sunlight tumbled through the ancient trees, and mites danced in the sunbeams. We walked through streams of light and shadow. The dead may have been waiting here for over a thousand years, but in one section workmen busily repainted markers while at another grave a monk chanted a service as pilgrims with their white robes and staves of bells walked by. 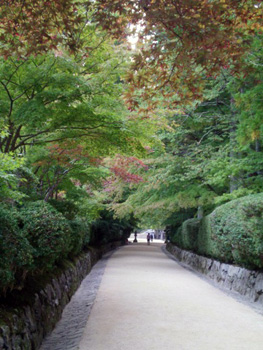 After a thirty-minute stroll, the track opens onto Oko-in, the Kobo Daishi’s temple. Suddenly the place bustles, for another path (almost a road) comes straight from the huge car park where the daily buses grind to a halt, delivering tourists intent on achieving enlightenment in a few hours. On this walkway can be found many gaudy (and theologically suspect) edifices, such as the White Ant Memorial, built as a guilt offering by a pesticide company.

All this chaos is forgotten in the temple area. A stone bridge arches over the Takugawa River, which is dotted with wooden memorials for those who have drowned. Pilgrims ladled water over huge Jizo statues in offering for the dead before dedicating the ashes of loved ones. Candles and incense saturate the air, and many waft the fumes over themselves for spiritual and bodily well-being.

The Oko-in is truly the heart of Koyasan. A huge wooden temple, it’s tranquillity defies the crowds. Alone with the Daishi, we sat on some reserved wooden benches to spend awhile contemplating the road to Nirvana. Nearby is the Hall of 3000 Lanterns (the Toro-do), where two lamps have burned for over a thousand years without the need for fresh oil. Another hall houses Buddhist writings brought to Koyasan by Tripitata, the prince of Monkey fame. 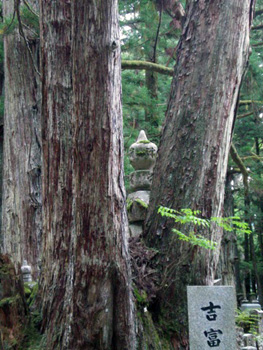 Despite hosting over a million pilgrims a year, Koyasan remains a spiritual place. Most leave by mid-afternoon, and by evening we walked deserted streets. Many of the temples lie hidden behind wooden gates and guarded by stone lions, with the occasional glimpse of a balcony.

Some fifty of the temples on the mountain offer shukubo, or temple lodging. A bamboo screen in our room opened onto a garden of contemplation; a sea of moss-covered rocks and sculptured azalea bushes, with white pebbles scattered around the larger stepping-stones. A stone lantern stood in one corner, as if it had rested there for centuries.

A deep bell summoned us from sleep, and the chanting of the monks flowed from the centuries-old temple into the mist of dawn. The flames of their offerings shot into the air, the light licking the wooden walls (perhaps the reason why only one hundred of the original thousand temples remain). Afterwards, an elderly monk explained the service in halting English. This was followed by a traditional Japanese breakfast.

A bus ride back to the station, then the cable-car back down the hill; it felt as if we were slowly returning from some distant land to the chaos of the present. 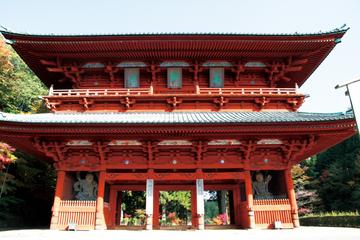 Arriving: Koyasan can be reached by train on the Nankai line from Osaka. This takes around two hours. A cable car completes the journey. The Tourist Information Centre is in the centre of town, on the main street. They have numerous maps, including walking trails, information on the various temples and sights, and can help with accommodation. Public phones are outside.

Dining: There are numerous restaurants of all price ranges, with plastic models in the window displaying the food on offer. There is also a supermarket for self-catering.

All photos are by Anne Harrison:
An ancient temple in Koyasan
Graves hidden amongst the trees
A deserted train station
A temple path, Koyasan
The Okunoin, a grove of cypress and tombs