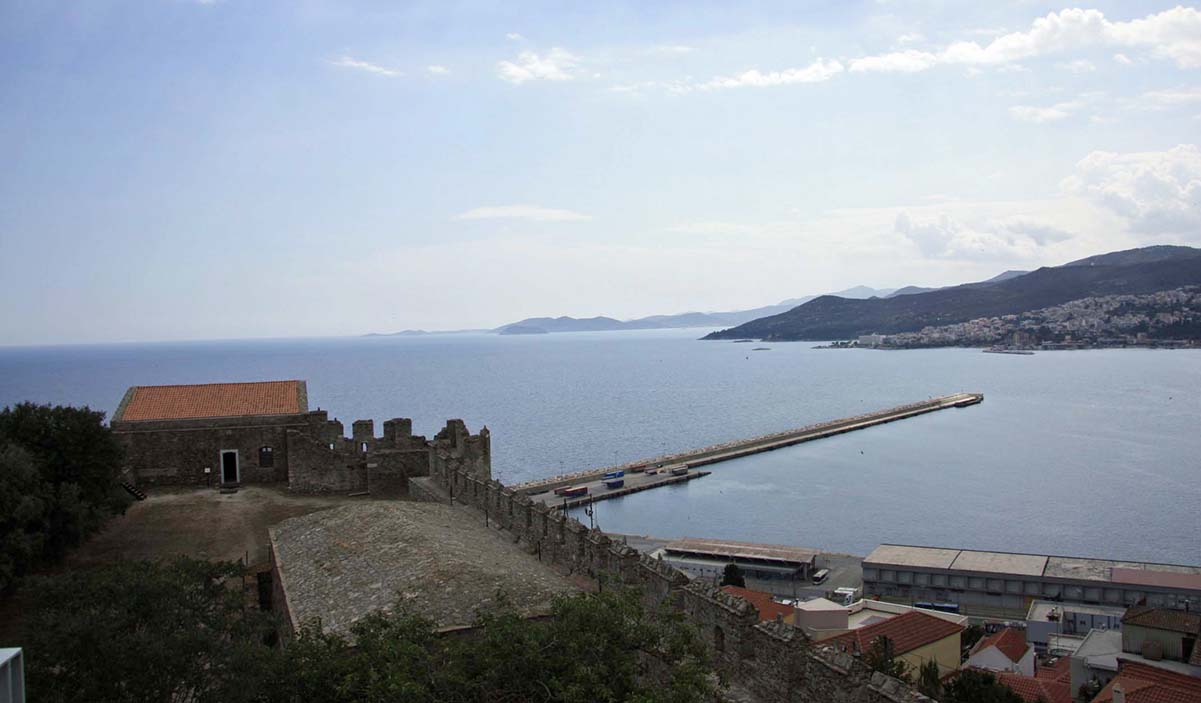 Almost two thousand years ago the world was changed forever by the teachings of Jesus and his death and resurrection. Very special people were later entrusted with spreading the message of salvation and eternal life. One of these was the charismatic Paul of Tarsus who worked tirelessly as a missionary to spread the Gospel. He possibly became the most important person after Jesus in the history of the church but how do you summarize his life in just a few words? He was a devout Jew, Roman citizen, prosecutor of Christians, witness of Christ, evangelist, Equal-to-the-Apostles, Apostle of the Nations and martyr. He was also the first Christian missionary to spread the Gospel into Europe by way of Greece as detailed in the book of the Acts of the Apostles.

The route of Paul’s second missionary journey through Greece is inspirational for both pilgrims and history buffs alike. It all began with a dream in which a Macedonian man invites Paul to visit Macedonia to help them (Acts 16:9). With this, Paul set sail for Neapolis (present-day Kavala) in the winter of 49 CE. He quickly passed through the city, exiting by way of the Via Egnatia, the main road through Macedonia at the time. His destination was Philippi, the most important Roman settlement in the region (Acts 16:11). 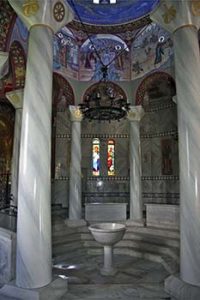 Paul spread the good news in Philippi and baptised his first convert, a business woman named Lydia, in the Gangites River just outside the city (Acts 16:14-15). The Baptistry of St. Lydia, located near the river, commemorates the event. Inside, I was overwhelmed by the colourful icons and mosaics on the walls, arches and ceiling depicting scenes from the life of St. Paul. At the center of the octagonal interior, right under the dome, is a whitish gray baptismal font used for infant baptisms (adults are baptised in the river).

Paul became Lydia’s houseguest during his eventful stay in Philippi. While preaching in the city, he cast out a demon from a slave-soothsayer (Acts 16:18). Her owners then had Paul dragged in front of the city officials after having lost their primary source of revenue. Paul faced the city officials in the marketplace (Acts 16:19-20), likely at the bema. The bema is a raised platform on which officials stood or sat as they listened to charges and passed sentence. The bema of Philippi is now a poorly defined pile of rocks with some grassy overgrowth. If you follow the Via Egnatia, which runs along the length of the Roman agora, you will pass right beside the bema. 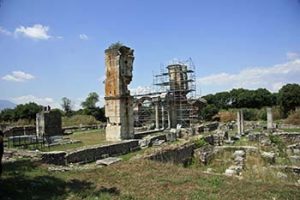 The Book of Acts may be inaccurate when it indicates that Paul’s sentencing occurred in the marketplace and therefore should not be accepted as Gospel. The agora of Philippi was the political, administrative and religious area of the city but it was not the commercial marketplace. The commercial marketplace is now largely buried beneath the ruins of the 6th century CE structure known as Basilica B. You will find the ruins of several retail shops on the north side of this basilica, but none have been dated to the time of Paul.

Paul and his companions were beaten and sent to the inner prison (Acts 16:23-24). The traditional site of Paul’s prison cell is the arched Roman cistern set under the atrium of the late 5th century CE structure known as Basilica A. Looking down inside you find a small column section and several stone blocks. The right side-wall may have been decorated with a fresco at one time. 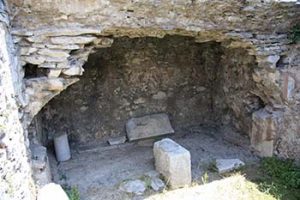 A great earthquake damaged the prison and allowed Paul to escape (Acts 16:26). After baptising the jailer and his family, he traveled on to Thessaloniki by way of the Via Egnatia. Paul passed through Amphipolis and Apollonia without stopping in either city.

The Via Egnatia would have brought Paul into Thessaloniki near the present-day Arch of Galerius (constructed between 298-305 CE). The only sites that he visited in Thessaloniki were the house of Jason, of whom nothing is known, and the synagogue (Acts 17:1-6) where he roused the anger of the local Jewish community. He then moved on to the synagogue in Berea (present-day Veria) with the Jews of Thessaloniki in pursuit shortly after (Acts 17:13). Paul managed to escape to Athens by boat.

Paul’s first impression of Athens was revulsion of the idolatry (Acts 17:16). Imagine him walking around through the Ancient Agora and seeing the Temple of Hephaestos, now the best-preserved temple in Greece, or looking up at the Acropolis toward the Parthenon. He limited his exposure to pagan practices by spending his time debating in the synagogue and in the marketplace (Acts 17:17). 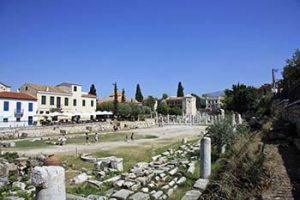 The commercial marketplace had been situated in the Roman Agora since the reign of Augustus (27 BCE-14 CE). You will find the ruins of several shops on the east side of the Roman Agora near the octagonal “Tower of the Winds”, but it is not clear if these date to the time of Paul.

Various philosophers heard Paul’s message and wished to know more, so they invited him to address the High Court at its meeting place known as the Areopagus. Here Paul succeeded in turning Dionysios the Areopagite into a believer (Acts 17:18-34).

The Areopagus is a rocky outcropping, 115 meters high, located below the west side of the Acropolis. I climbed the craggy, slippery rocks to the summit as Paul would have done, but there is also a modern stairway if you feel it is safer. The Areopagus is also the only indisputable present-day site connected with Paul’s second journey. 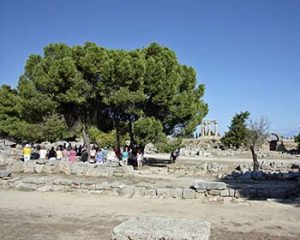 Paul departed Athens for Corinth (Acts 18:1). Once in the city, he set up a tentmaking shop with two Jewish exiles from Rome (Acts 18:2-4). Operating a shop in commercial marketplace would have provided Paul with many opportunities to speak with customers and passersby about Jesus. On the north side of the ancient agora, near the Temple of Apollo, are the remnants of sixteen shops dating to the mid 1st century CE. The shop with the vaulted arch was a church at one time. Could this have been the traditional site of Paul’s tent shop? This is only speculation but, as in Philippi, houses of worship are sometimes constructed over sacred sites. Coincidentally, a priest was saying mass under a tree just a short distance away from this site as I passed by.

Paul taught in the synagogue on each sabbath and again aroused the anger of the local Jewish community. They brought him before the Roman Proconsul Gallio at the place of judgement (Acts 18:12-16), the bema, charged with subversive teaching. Gallio dismissed the charges.

The bema consists of a raised rectangular stone platform with six layers of finished stone and a stone slab on its eastern side which features a quote from Second Corinthians 4:17. I climbed the stairs to the top and found four pieces of marble that were once part of the lower section of a doorway (propylon).

After spending 18 months in Corinth, Paul departed for Ephesus by way of the nearby port of Cenchreae (modern-day Kechries). The South Stoa, which dates to the time of Paul, touches the road to Cenchreae, just to the left of the bouleuterion or council chamber.

Paul would eventually return to Corinth and Philippi in the years to come. The seeds that he sowed on his second missionary journey would grow into the official religion of the Roman Empire in 313 CE.

The Archeological Site of Philippi is approximately 15 kilometers inland from Kavala. Admission (including the museum) is 6 Euros.

The town of Lydia is just outside the archeological site of Philippi. Admission the Baptistry of St. Lydia is free. The location of Lydia’s house is not known. 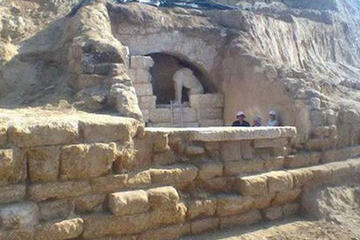 The Arch of Galerius is located near the intersection of Egnatia and Dimitriou.

The locations of the synagogue and Jason’s house are not known.

The Temple of Hephaestos is located within the Ancient Agora.

You can purchase a combination ticket for 30 Euros that allows you to visit a number of sites in Athens including the Acropolis, the Ancient Agora and the Roman Agora.

Admission to the Areopagus is free. 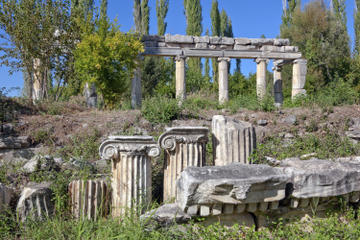 The Corinth of Paul’s time is approximately 7 kilometers away from the modern city of Corinth. Admission to the site of Ancient Corinth is 8 Euros. 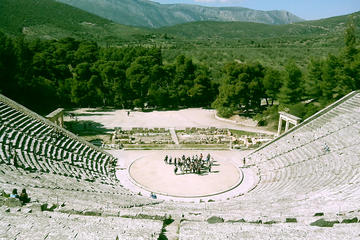