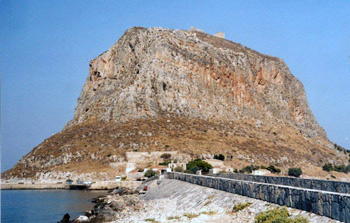 I know that each one of us travels to love alone,
Alone to faith and to death
I know it. I’ve tried it. It doesn’t help.
Let me come with you”
— from Moonlight Sonata by Yannis Ritsos

The towering rock of Monamvasia rises from the sea on the south eastern coast of the Peloponnese. Known as the Gibraltar of Greece, it has been a fortified settlement since ancient times. It got its name which means “Sole Entrance” from the 6th century AD because the only entry is through a fortified tunnel. In the words of the poet, Yannis Ritsos, “The scenery is as harsh as silence“ 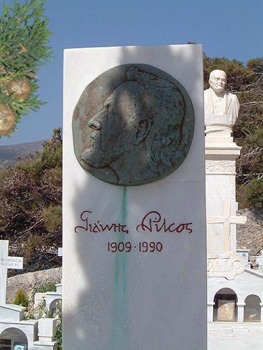 Yannis Ritsos was born in Monamvasia in 1909. An aristocrat by birth, renowned in Greece as an actor and director, he was one of Greece most beloved poets and is considered one of the five great Greek poets of the twentieth century. He won the Lenin Peace Prize in 1956 and was named a Golden Wreath Laureate in 1985.

During his lifetime, Ritsos suffered many great losses including the early deaths of his mother and eldest brother from tuberculosis and the mental illness and confinement of his father. He, himself, spent several years in a sanitarium for tuberculosis. In later years, because of his left-wing politics, he was imprisoned and exiled and his poetry banned in Greece.

I arrived in Monemvasia early one morning by bus from Athens. At first it seemed to me not much more than a quiet coastal town, dominated by the steep rock off-shore which is connected by a long causeway. The old town itself is completely walled and is not visible. In the new town, boats crowd the little harbour. The shore is lined with small shops and tavernas. I found a pleasant pension overlooking the sea and set out to explore.

Known as “the Rosemary of the East”, Monamvasia was besieged by various people including the Franks who occupied it until 1200 until they were expelled by Byzantine troops. After that, it became a naval station for the Byzantine Empire. It was renown through the medieval world for its excellent Malmsey wine, mentioned in Richard III, Act I, Scene 9 when Edward IV asked the Duke of Clarence who he’d condemned to death how he’d like to die. He replied “Drown me in a barrel of Malmsey wine!” Production of this wine ended in 1545 when the Turks prohibited it and since then the method of which the Muscat wine was produced has been lost. 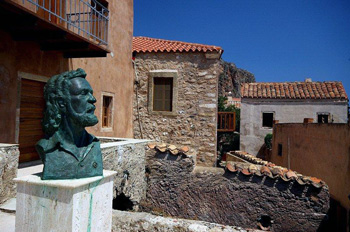 Lying on an important trade route, Monemvasia was occupied by the Venetians after pirate raids caused the inhabitants to ask for their help. There were 90 famous pirates in the Mediterranean at that time. After the Venetians took over, the town became inhabited with knights, merchants and officials. New building and restoration work began. But once Venetian power began to wane it fell to the Turks. When Turkey declared war on Venice, the city was recaptured but it wasn’t until the Greek War of Independence on July 21, 1821 that the town was liberated.

It’s a magical experience visiting this little medieval town. As you come through the thick stone vaulted gateway you are immediately transported into another age. The narrow cobbled streets wind up the side of the rock, which is topped by a castle fortress. The entire town is walled and invisible from the shore. Many of the old buildings are restored and house boutiques, B&Bs and small bistros. One of the tavernas is owned by relatives of Ritsos.. Many of the old buildings still have the crests of Venetian noble families on the old wooden doors. You can lose yourself in the past while resting in a shaded courtyard or edging your way down a narrow cobbled street. Monamvasia truly is a gem, a step back into the glorious age of Byzantine Greece. It’s easy to imagine what life was like there, hidden away on the rocky slope of the mountain, with the teal-colored sea churning below.

Although much of the old “lower” town is in ruins, the family home of Yannis Ritsos has been restored and turned into a museum. There is a monument to the poet outside the house. During the 1980s Ristos wrote several novels compiled under the title Iconostase of the Anonymous Saints. Written in his poetic style, they are filled with sadness and the consequences of loss. Ritsos died in Athens on November 11, 1990. He is buried in the cemetery outside the walls of Monamvasia.

♦ Buses to Monamvasia run daily from Athens, via Sparta. In summer there is Flying Dolphin service once a day from Pireaus.
♦ The medieval town is inaccessible to cars and motorcycles. A free shuttle bus operates between the causeway and old Monamvasia from 7.30 am – 10 pm June to September.
♦ There are hotels and pensions in the new town and a camp site nearby.

About the author:
Ruth has visited Monamvasia several times and paid homage to Yannis Ritso at his family home. He is one of her favorite Greek poets. Ruth has lived in and visited Greece since 1979 and considers it her second home. Her historical fiction novel SHADOW OF THE LION will be published August 2014 by MediaAria-CDM publishers,UK. The story tells the story of the end of Alexander the Great’s dynasty. http://www.ruthkozak.com