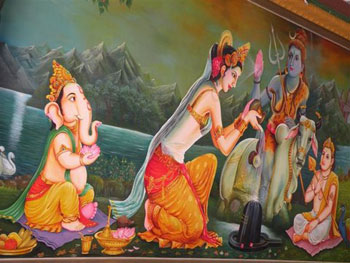 An Indian Community in the South Pacific

Santosh Kumar, a young artist, squats in a sprawling Hindu temple, designing a poster-size painting. Featuring the voluptuous goddess Lakshmi, it will become a huge outdoor billboard announcing Diwali, the annual festival of lights. A specialized religious painter, Kumar tells my wife and me that he has worked here for four years, creating dramatic ceiling images of almost psychedelic brightness in modern acrylics. 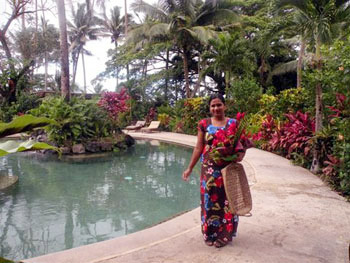 But this is not India. We are visiting Fiji, where we keep meeting people of Indian origin. Descendants of indentured plantation laborers first brought in by the British in the 19th century, they are now a thriving community coexisting alongside that of the native Fijians.

While riding the ferry to the island of Ovalau, we chat with an electrical contractor named Sharma. On board are his trucks and Indo-Fijian technicians, all heading out to install new power lines. While on Ovalau, I need some bandaids and enter a small general store. The proprietor, Bhupendra Kumar, is thrilled to meet a visiting journalist. “I’m a writer, too,” he beams and shows me a book on the history of his town. He had written the chapter on commerce and trade and had once served for several years as mayor.

It becomes clear that the Indo-Fijians, just under 40 percent of the population, are predominant in urban life and modern sectors of the economy. They own and operate most of the stores, drive the buses and taxis, staff government offices, maintain the water, sewage and electrical systems, and keep the entire commercial and technological infrastructure running. As one American resort manager tells us, “they are more entrepreneurial than the Fijians, and they show up for work on time.” 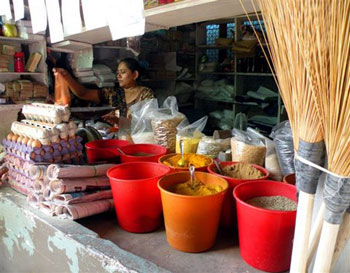 The Indians also contribute a distinctive cultural flavor to a country that is physically lush and beautiful but full of contrasts. The city of Nadi is a gritty, sun-baked place with a Third World feeling. But we duck into a shop on the main street and find ourselves in a dazzling emporium of brilliant saris and South Asian fabrics. At the open-air market, we weave through milling throngs who browse and schmooze as well as buy. Counters are decoratively piled with a cornucopia of enticing tropical produce: papayas and jackfruits, pumpkins and tomatoes, oranges and okra, radishes and watermelons. Around the fringe are stalls where Indian women weigh out lentils, beans, chilis, rice and other grains. The fragrance of ground cumin and turmeric wafts on the breeze. In a cool, air-conditioned room, fisherman Saiman sells his fresh catch. He goes out with two boys as crew and hand-lines for sea bream, red snapper and barracuda. Because Indians have been marginalized politically by the Fijian majority, in recent decades tens of thousands have emigrated. Saiman’s own mother now lives in Canada.

All this good food whets our appetite for dinner. At a simple screened-in restaurant, unique local ingredients have been incorporated into traditional Indian cuisine. The highlight is succulent curried fresh-water mussels on rice. 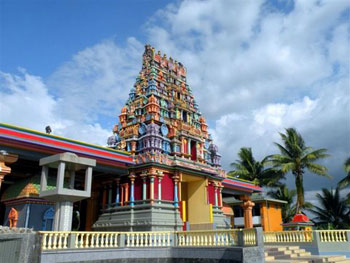 A week later, having flown to the quaint and friendly northern port town of Savusavu, we meet a wiry young contortionist, Rajesh Kanna, who puts on shows in Fiji’s larger cities. He demonstrates some of his seemingly impossible positions and hands us his card. Adjacent to the market is a tiny take-out place with only a few tables and chairs. The owner, Kamla Pati, cooks us a spicy chicken curry lunch, with dal, rice and rotis, for a laughably low price. Her daughter Rita, 20, is engaged to be wed. It is an “arranged” marriage, but only in that the families must approve the match and are negotiating important details. However, the two young people had in fact met where the fiancé works and felt a strong immediate attraction. Then younger daughter, Briya, 16, shows up. Still in high school, she aspires to a career managing a department store and proudly shows us the one-room Hindu temple where her family worships, the men on Friday nights and the women on Mondays. 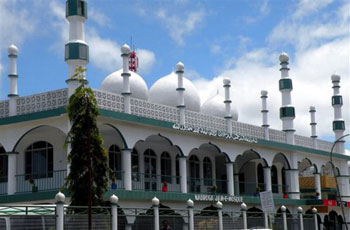 One of our drivers between towns, Kasim, is an Indian Moslem with a Hindu wife. Mosques are scattered across towns and rural areas. But such intermarriage is unusual. And although Indians and native Fijians mix comfortably at work, there is little more intimate contact.

We come to see how Fiji’s Indians inhabit an unusual cultural world. After more than a century, memories of the Indian past are fading. Hardly any of them have ever set foot in that distant country. And with English taught in school, few can read or write proper Hindi. Yet some still identify with their great-grandparents’ regions of origin. “I am from northern India,” says our last driver, Hamesh Sanjay (who in fact has never been there) “but my wife is from the south, and when we married, it had to be according to the southern way.” There are also significant north-south differences, he says, in religion and funeral customs. Although generations removed, the Indians of Fiji continue to hear echoes of life from their ancestral homeland. 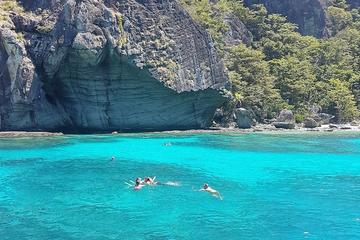 The Sofitel is a large, stylish hotel with excellent food convenient to Nadi and the international airport. www.sofitelfiji.com.fj
Koro Sun is a beautiful small resort of individual cottages near outlying Savusavu. www.korosunresort.com
Best connections to Fiji are via Honolulu with Continental.www.continental.com

About the author:
Tom Koppel is a veteran Canadian author, journalist and travel writer who has contributed travel features to numerous newspapers and magazines for over 25 years, including the LA Times, Chicago Tribune, Dallas Morning News, Columbus Dispatch, Georgia Straight, Globe & Mail, National Post, Islands Magazine, Sydney Morning Herald and Canadian World Traveller magazine. He recently completed his fifth book of popular nonfiction, about the South Pacific islands, and this story emerged from travels in that region.