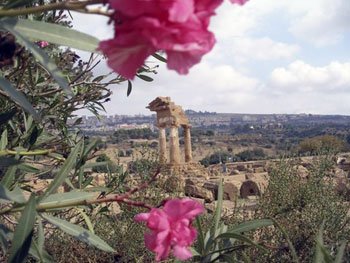 Centuries before the Romans conquered southern Italy and Sicily, the Greeks had already colonized the hospitable coastlines here. The Greek population was so large that the Romans referred to these two regions as Magna Grecia (Greater Greece). The process of settling Greater Greece was the original “How the West was Won”.

Paestum on the Italian mainland plus Agrigento and Syracuse on Sicily are the three best Greek settlements for touring. Paestum has three of the most complete Greek temples in Italy. Agrigento boasts the Valley of the Temples; Syracuse showcases an ancient Greek theatre and several temple sites. Each of these UNESCO World Heritage Sites also has a museum displaying a wealth of Greek items. All three sites are easily accessible and make for great day trips into the past.

Greeks established Paestum in 600 BCE as “Poseidonia” in honor of their sea god Poseidon. The Lucanians would conquer this city two centuries later but not before its Hellenic residents built three temples, now some of the best preserved in Italy. 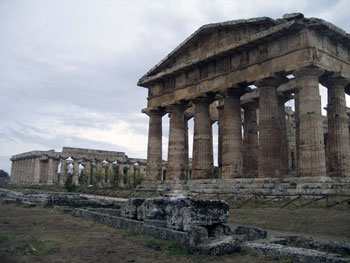 All three temples face eastward, presumably to allow the rising sun to shine on any deity statues inside. Furthermore, they are close together on flat terrain which allows for easy comparison. Having these three large structures so close to the road as you arrive is intimidating. You almost feel like their respective deities are still inside demanding your worship and sacrifices.

The Temple of Hera at the southern end of the archeological site was built around 550 BCE. All of the fifty greyish sandstone columns forming the peristyle remain upright. Unusual for temples at other Greek cities, remnants of a small sacrificial altar grace the front of the structure rather than the interior. 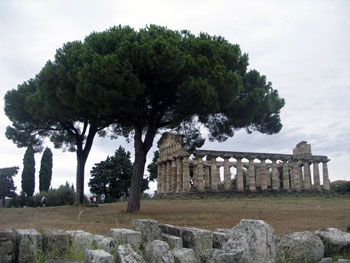 The neighboring Temple of Poseidon, dating to 450 BCE, is the largest and best preserved structure on site. Thirty-six honey brown travertine columns form the peristyle. This temple reflects the transition between the Archaic and later Doric styles. Again the remains of two altars are located in front of the structure. Only the larger altar is of Greek origin; the smaller is Roman.

The grey limestone Temple of Ceres, built about 500 BCE, is a short walk to the north. This temple with 34 columns is the first anywhere in the Greek world to display a transition between the Doric and later Ionic styles. Remnants of an altar are found in front of this temple as well. Three medieval Christian tombs were installed under the floor indicating that this temple was once a Christian church. 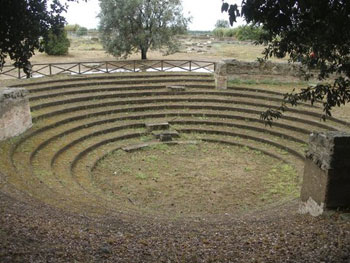 The Ekklesiasterion is located just inside the park fence, opposite the museum. The circular, limestone oratory was the site of democratic assembly for this city-state. This low-lying structure has 10 levels of seats.

Cross the road to the Archeology Museum of Paestum. This museum features local objects collected from the Greek, Lucanian and finally the Roman periods. Prized Greek items include metopes taken from another Temple of Hera several kilometres north of Paestum, 6th century BCE bronze vases decorated with rams and sphinxes, black and brown pottery, bronze helmets and breast plates. 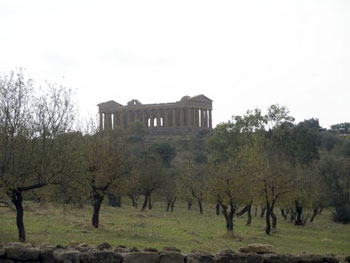 The Valley of the Temples at Agrigento is all that remains of the ancient Greek city of “Akragas”. Founded in 582 BCE, residents would construct eight temples over the next century. Of these, only five are accessible on site.

Your step back in time begins with a panoramic view of ancient structures peeking out from behind groves of trees to pique your curiosity. The five Doric temples, in various states of disrepair, are set on a ridge and not in a valley. Arriving on site, you find that the park is divided into two separate sections, each with its own entrance.

The Temple of Concordia, constructed around 430 BCE is the best preserved. All 34 honey brown calcarenite columns remain standing. This structure was saved from destruction because it was transformed into a Christian basilica in 597 CE. A Christian necropolis used between the 3rd and 6th centuries CE is located nearby. 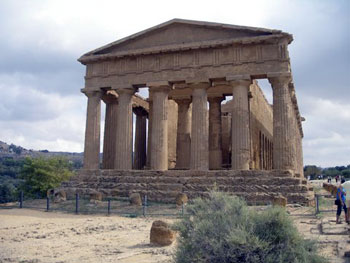 The Temple of Hera stands at the highest point of the ridge. Twenty five of its 34 honey brown calcarenite columns remain standing, making it the second best preserved temple in the park. This temple was constructed between 450 and 440 BCE.

Long ago earthquakes toppled the remaining three temples. Much of their debris was recycled for other structures in the area. The temple of Heracles is the oldest of these three temples, having been constructed about 500 BCE. Eight of its original 38 honey brown columns were partially restored in 1923 by the Englishman Alexander Herdenstel. 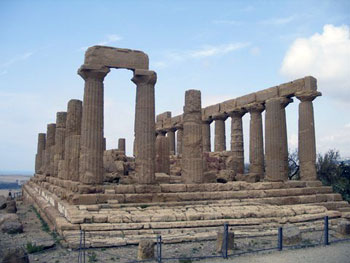 Exit this side of the park to visit the last two temples. The first is the Temple of Castor and Pollux (Dioscuri). Four of the 34 honey brown columns remain standing amidst fruit-laden olive trees. Here visitors find that Greek-style columns were not one solid cylinder. Rather they were assembled from several cylindrical drums. The end of one of these drums features a square indentation. A wooden peg may have been set in this indentation as a means of aligning and stabilizing the drums as they were stacked one upon the other. Visitors should note that some of the drums on site may have belonged to other structures at one time.

The Temple of Olympian Zeus is now in total ruins but in its time it was the largest Doric temple ever constructed. History records that construction was never fully completed. Unlike many other Greek temples of the period, the spaces between its columns were walled in. This was in part facilitated by incorporating 25-foot high human figures known as telamons to support the building. The telamon on site is only a copy; one of the originals is exhibited in the Archaeology Museum. 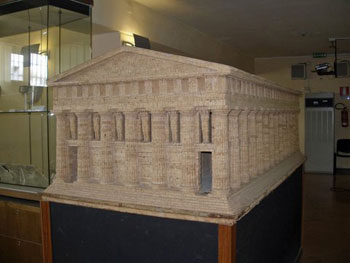 You can put the Valley of the Temples into perspective with a tour of the Archeology Museum.

This museum displays Agrigento-area objects from the pre-historic to Roman periods. Greek items include black and orange figured pottery, sarcophagi, coins, a bronze warrior helmet, wall paintings and 5th century BCE statues of various deities. You can also study a scale model of the Temple of Olympian Zeus. Note that each telamon only fills the upper half of each space between the columns. When you finish with the museum, tour the ruins on the grounds.

Syracuse was founded by the Greeks in 734 BCE. By 413 BCE, it had become the most powerful Greek city in the ancient world after defeating Athens in a great sea battle. Reminders of its Hellenic heritage are found throughout the city. 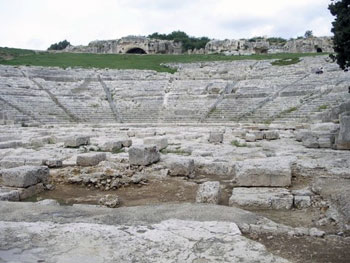 Arriving at the Neapolis Archeological Park you find little evidence of any ancient structures within. Your first impression is that of a quarry. Appearances are deceiving as the park actually includes the largest Greek theatre in Sicily. This theatre is hidden from view by trees. You only discover the structure when you arrive on site. Carved out of a limestone hill in the 6th century BCE, this theatre held 15,000 spectators in 67 rows of seats. A tunnel around the periphery may have allowed people to enter and exit the theatre quickly. The upper level of the structure features a number of arches carved out of the solid rock as small “grottos”. One of these holds a small waterfall inside. Compare this Greek theatre to the nearby 3rd century CE Roman amphitheatre. The Greek theatre is semicircular and open while the Roman structure is oval and enclosed.

A short walk outside the park brings you to the Paolo Orsi Regional Archeology Museum. Recovered items date from the mid Bronze Age to the 5th century BCE and include Greek statuettes, orange and black glazed pottery, spear points, ax heads and a sickle. Scale models of the Temples of Athena and Apollo put the remnants of these local structures into perspective. 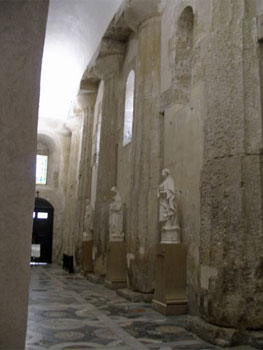 Leave the Museum and walk to Ortygia Island, the historic center of Syracuse, for more Greek history. Your first destination is the remains of the 6th century BCE Doric Temple of Apollo. Only two of its 42 grey limestone columns and a section of wall remain standing. This temple is in a serious state of disrepair after last having been used as a church during the Norman period almost one thousand years ago. The temple grounds are fenced off from the public.

A short walk away, you find a 7th century CE Duomo decorated with a Baroque façade. Inside, ten greyish brown columns have been incorporated into the side walls of the nave. These columns are all that remains of the 5th century BCE Doric Temple of Athena.

Paestum, Agrigento and Syracuse are three different perspectives of ancient Greek society. Their respective colonists were intent on permanent settlement and except for Paestum they were largely successful. None of these sites were cultural backwaters. Residents built all the amenities for self-sufficiency and eventually achieved a level of sophistication that was comparable to the cities that they left behind in their homeland. 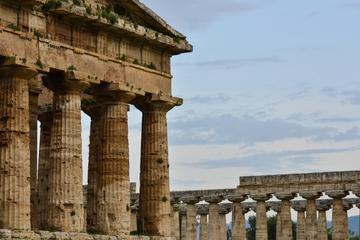 ♦ Paestum is 85 kilometers south east of Naples (39 kilometers south of Salerno) and is accessible by train. The train station is a 15-minute walk from the archeological site. Purchase the combination pass to the archeological site and the Archeology Museum of Paestum. The cost was 6.50 Euros at the time of my visit.
♦ Visitors cannot enter any of the temples at Paestum. 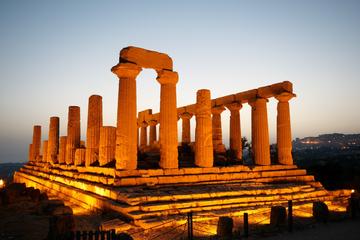 ♦ Syracuse in at the end of the train line that also includes Messina, Taormina and Catania. Purchase the combination pass for the Neapolis Archeological Park (Parco Archeologico della Neapolis) and the Paolo Orsi Regional Archeology Museum (Museo Archeologico Regionale “Paolo Orsi”). The cost was 9 Euros at the time of my visit.
♦ The Neapolis Archeological Park is located at Via Del Teatro (off the intersection of Corso Gelone and Viale Teocrito).
♦ The Paolo Orsi Regional Archeology Museum is located at Viale Teocrito 66 approximately, 500 meters from the Parco Archeologico della Neapolis.
♦ The Temple of Apollo is located in the Piazza Pancali at Largo XXV Luglio and Corso Umberto in Ortygia.
♦ The Duomo is located in the Piazza Duomo. 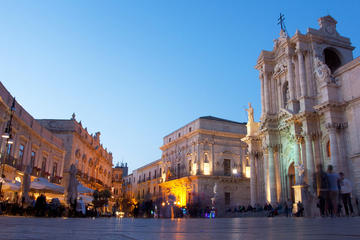 About the author:
Troy Herrick, a freelance travel writer, has traveled extensively in North America, the Caribbean, Europe and parts of South America. His articles have appeared in Live Life Travel, International Living, Offbeat Travel and Travel Thru History Magazines. He also penned the travel planning e-book entitled ”Turn Your Dream Vacation into Reality: A Game Plan for Seeing the World the Way You Want to See It” – www.thebudgettravelstore.com/page/76972202 based on his own travel experiences over the years. Plan your vacation at his www.thebudgettravelstore.com and www.plan-a-dream-trip.com

Photo credits:
All photos are by Diane Gagnon. She is a freelance photographer who has traveled extensively in North America, the Caribbean, Europe and parts of South America. Her photographs have accompanied Troy Herrick’s articles in Live Life Travel, Offbeat Travel and Travels Thru History Magazines.