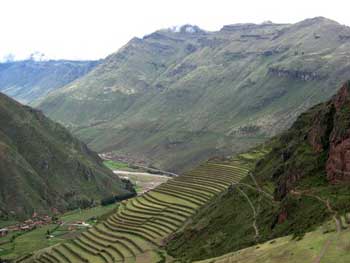 From the historic Inca city of Cuzco, my wife, Alexa, and I took a collectivo taxi (a mini van filled with local Peruvians) over the mountains surrounding Cuzco down into the “Sacred Valley” to the village of Pisac. The town is situated in the bottom of the valley created by the Urubamba River. The Sacred Valley is lined with massive mountains on either side of the river, with flat farmland in the bottom of the valley. The Urubamba River originates in the altiplano south of the Cuzco area, and eventually flows into the Amazon River, travelling through the arid Sacred Valley and the downstream ruins of the more famous Inca site of Machu Picchu. 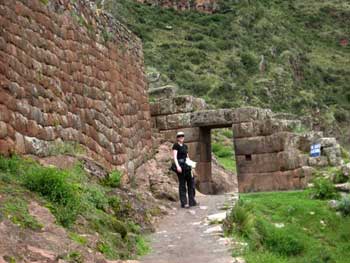 The town of Pisac (elevation about 9,500 ft) has a central market that is frequently visited by tour buses on their way to the ruins on the hills above Pisac. Most tours stop at the craft market and then head up to the ruins for the morning, and then move on down the Sacred Valley to other archaeological sites. From the town of Pisac, you can view the ancient Inca terraces far up on the steep hillsides. Looking up the steep slopes from Pisac, it is hard to imagine walking up the steep slopes of the mountains to labor making stone terraces and farm these remote and high fields, but evidently the Inca did it. In the ancient construction of the agricultural terraces included both normal stairs and stones inserted into the walls to allow them to move up through the terraces as they tended their crops on the high slopes.

We came to Pisac to stay for a few days and hike all the way up to the ruins, for our own Inca trail experience. The perched towers of the ruins are visible from town, way, way above the central market plaza, on the top of the towering mountains. 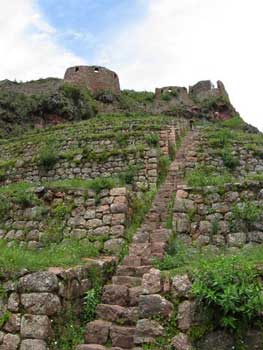 The next morning after arriving in town, finding a place to stay and getting some food for the hike, we set out up the stairs leading from town to the first set of terraces. We headed through the market stalls selling colorful alpaca wool shawls, blankets and hats, stopping to barter and eventually buy some woolen hats to ward off the chill of the thin mountain air. Leaving the market by a small back street passing between mud wall compounds and heading towards the steep slopes at the edge of town, we walked over the cobblestones of a path which led up towards the first ascent into the terraces above the village.

We climbed slowly up the smooth old stone stairs and terraces, gaining elevation and rewarding views of the valley below. As we steadily climbed the smooth stones, we reflected on the hard work it took to form the stones and fit them together to create the stone stairs we now climbed. The stairs lead up through a series of terraces created by more formed and stacked stones. For us, it was enough physical work to climb the stairs, but the Inca stone workers who built the terraces and trails we hiked on had not only walked these same trails, but then spent theirs days laboring to do the stone work and farm the terraces we were passing through. 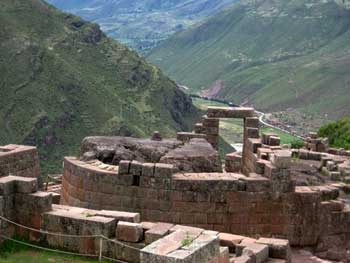 Fortunately, we had been at high elevations for over a week to allow our bodies enough time to adjust to the elevation and thin mountain air, so the climb did not cause any altitude sickness. As we steadily climbed the hill, breathing heavily as we strained to extract oxygen from the cool and crisp morning air, we climbed a long series of stairs up between two small guard towers. We continued through the high farm terraces and into the ruins of small settlement on the steep slopes where the buildings had been laid out to form the shape of a bird when viewed from above. Then we climbed up to the ceremonial center of Intihuatana within the ruins.

Intihuatana (“hitching post of the sun”) was an important ceremonial site and solar observatory that has very fine rectangular stone work and forms a temple around a large rock that has been shaped by Incan solar observers to determine the time of the winter and summer solstices, important for the timing of agricultural work for their society. There is a central stone that was very important to the Incan priests, with a complex drainage system that captured the runoff from the stone and stored it in a basin that discharged to a series of channels and fountains below the hilltop site. 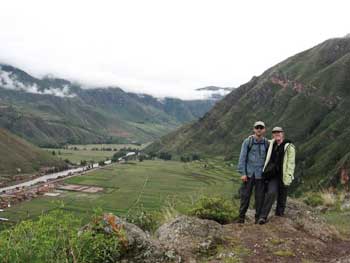 From the ceremonial center, we moved up through an Inca tunnel carved into the rocky mountain top, along a defensive wall beneath military barracks (where they guarded the main entrance) and into a saddle that had sacred baths and views of cliff sides with burial caves in them. Since the caves have been hit by grave robbers, tourists are not allowed into that area. We finished by going to the tour bus drop off area to get a some fresh squeezed orange juice before heading back down into town. In addition to the sense of accomplishment from having climbed all the way up (11,200 feet above see level) from town (over 1,700 feet of elevation gain) we got to visit the site in the opposite direction as the flow of the tour groups, and we could not help but feel a little smug as tourists huffed and puffed their way back to the bus parking area after their short tour, loudly complaining about the short hike.

Returning down the ancient trail to the valley below, we passed a local boy whom we had seen on the way up as he nimbly passed us while we labored our way up the slope. However, now he was dressed in traditional Inca clothing over his sweet pants and athletic shirt, which he had taken from his backpack. In his Inca costume, he was now perched up on a rock below some ruins, was playing a wooden flute in the hope of earning a few tips from tourists at the ruins. The sound of the wooden flute floated through the air as we headed down from the mountain-top stronghold, through the agricultural terraces and into the valley below.

When we made it back down to town, we feasted on lomo saltodo (beef cooked with onions, tomatoes, seasoning and served with fries and/or rice). Then we moved to another restaurant on the central plaza of Pisac for views of the mountains we had just climbed and tried some alpaca skewers and chocolate cheesecake, just to be sure we were full after our long and rewarding climb. 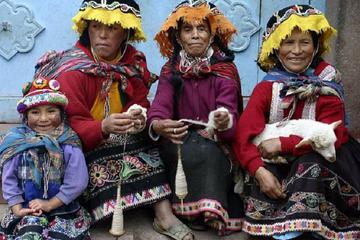 About the author:
Jason Burke works as a city planner and used the housing market crash as an opportunity to take a year off to pursue his passion for travel. Along with his wife Alexa, he spent 13 months travelling around the world. The blog of their entire trip can be found at: fadedbackpacks.wordpress.com

All photos are by Jason Burke.