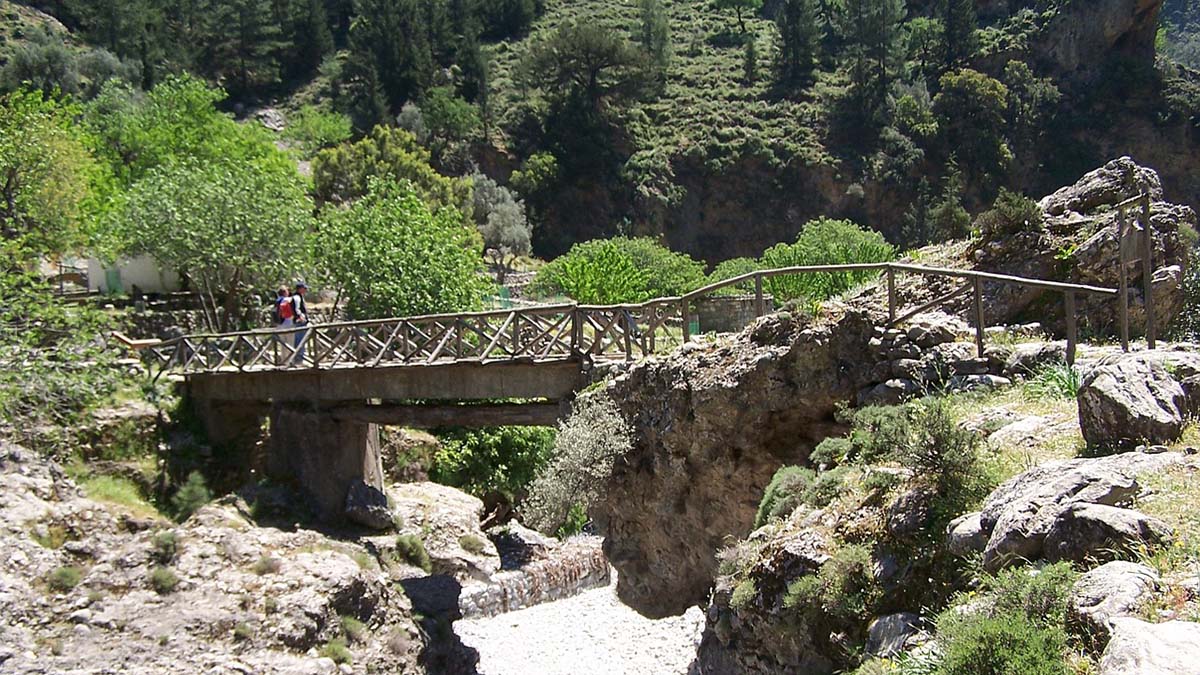 A Sensory Experience in Crete, Greece

From the moment I reached the threshold of the trail leading through the Samaria Gorge, on Crete, I became acutely aware of the limitations of conveying my experience in text or on film. The sheer magnitude of this landscape is impossible to capture in a photo or even in words. And yet my camera lens was resilient when it came to struggling to capture the pristine vistas or vivid colours of the floral and fauna. To taste this sublime experience you must stand before the Iron Gates (the narrowest part of the gorge), smell the pure air, or drink from the natural spring. A hike in the Samaria Gorge awakens the senses. 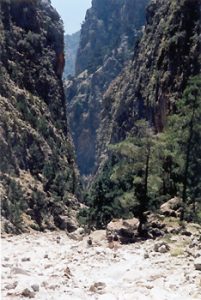 My base for the day-long hike was the town of Hania in Western Crete, which boasts a romantic Venetian port. I embarked on the 7:30am bus to the Samaria Gorge in the White Mountains (forty-four kilometers south of Hania), a trek of a sixteen kilometer trail. The Gorge officially became the National Park of Samaria in 1962. Between May to October it attracts thousands of visitors a day.

The Gorge is situated below the Omalos Plateau with a river flowing between the peaks of Volakias (2147m) and Avlimaniko (1858m). The width of the entire gorge ranges from 150m to 3m. The famous Iron Gates is the narrowest width of the gorge (three meters). Though the trail is sixteen kilometers, concluding at the shores of the Libyan sea in the quaint town of Agia Roumeli, the walk through the National Park of Samaria is thirteen kilometers, plus an extra three k. walk to Agia Roumeli. But experiencing the Samaria Gorge is not only about the trail: it is also about the scenery, wildlife and the many perks at the end of the long hike.

Before I embarked on the hike I made sure that I was armed with the necessities. Besides the obvious items, such as sunscreen and a hat, I had a packed lunch (the only places to buy food are at either entrance), and a bottle of water (the first rest stop and spring is 1.7 km into the trail.) While 1.7 km may not seem that long, the beginning is the most difficult part of the trail, as it is downhill and the terrain is slippery due to smooth stones. Consequently, running shoes or hiking boots are essential. The hike takes anywhere from three to eight hours to complete depending on your pace. I considered myself fairly fit and the hike took me seven hours to complete. 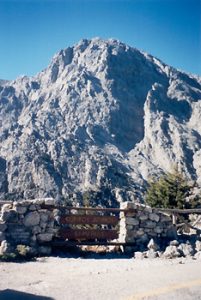 I began the trail at approximately 9:00 am entering the trail through the “Xyloskala” (wooden staircase) entrance. My pace became slowed when I realized that everywhere I turned was an opportunity for a fabulous picture. The fresh, crisp morning air kept me moving down the two kilometer steep and winding stone path, the most heavily shaded part of the trail.

Most hikers enter the trail through “Xyloskala” and travel from north to south. Hiking in this direction consists largely of descending steps and somewhat leveled surfaces. As a result, hikers seeking more of a challenge enter the path from the opposite direction. Though there is no avoiding the countless steps over the river, either by stepping-stones, wooden bridges or planks.

During the hike I was overwhelmed by the natural world: mountains, cliffs, trees, the river, springs, flora and fauna and wildlife surrounded me. It is difficult to describe just how lush and vibrant the Samaria Gorge really is. I felt as though I had suddenly walked into a Group of Seven painting, even though I was in Greece. When I was there in early June the entire trail was draped in vibrant pink oleanders.

The hike through the Samaria Gorge is not only perfect in beauty, but also because it is home to a large number of endangered species. The Cretan wild goat and the “Kri-Kri” (Ibex) are among them. In fact, the gorge was developed into a national park in order to save the Kri-Kri from extinction and to preserve its rare flora and fauna. At that time the inhabitants of the Samaria village who consisted of a few families of woodcutters were relocated. Just south of the abandoned settlement, which is halfway through the gorge, is the small 14th century Byzantine church of Saint Maria of Egypt. Apparently, “Samaria” derives from the Greek phrase “Osia Maria” (Sacred Mary). If you wish to sneak a glance of the Kri-Kri, it is best to avoid the tourist rush, since they are shy. The trick is to arrive as early as possible (the first buses usually arrive at 8am). 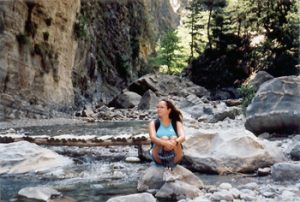 Remarkably, despite the large number of people who frequent the park, it is clean. There are mountain rangers by the rest stops and a medic on site for your safety. There are also springs where I filled my bottle with fresh drinking water. I never tasted better or cheaper bottled water in my life.

Though my primary goal was to reach the end, I also had one other landmark in mind: the Iron Gates. Once I reached this destination, not only was I eleven kilometers into the hike, but I was also facing one of the world’s most photographed landscapes. The Iron Gates is the narrowest part of the gorge, where two mountains hold all but three kilometers of space in between them at a height of 600 meters. I felt as though I was in a scene from some epic journey. I finally knew what it meant to deem something as sublime. Once I reached that point I knew that it was not much longer until the exit (only two kilometers to go)—or so I thought.

I did not reach the park exit until 3:30 pm. Perhaps my frequent rest stops and photo ops did not help my time. Still, I did not consider the hike to be difficult, rather more like a test of endurance than strength. What I didn’t know was that there was still a three kilometer path up ahead that lead to Agia Roumeli. Although the last portion of the walk was challenging, as there was no shade, and I was at the end of my energy, I pushed myself because I knew that there was plenty of gold at the end of this rainbow. In fact, the thing that makes this hike a unique experience is that there is more than one reward: upon the completion of the hike not only did I feel a sense of accomplishment, but also I had the Libyan Sea to cool off in, the seaside town of Agia Roumeli to explore, and a ferry ride from Agia Roumeli to Hora Sfakion where I took a bus back to Hania. It truly was an exciting sensory adventure. 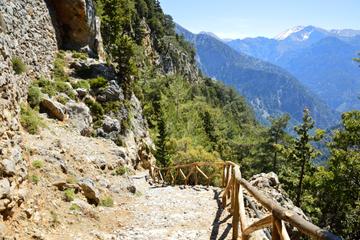 Gorge Info: The complete guide to the gorge of Samaria
– Buses to Omalos from Chania leave every morning from 7.30 to 11:00 am.
– Taxis from Chania to Omalos, 40 Euro (for 4 people)
– Entrance to the park: 5 Euro (children under 15 free, half price for students)
– The gorge is only open during the day. Guards check tickets to make sure nobody is in the park overnight.
– Start the hike early, at dawn. If you start after 12 noon you will have to spend the night in Aghia Roumeli.
– From Aghia Roumeli, boat service takes you to Hora Sfakion and from there get a bus back to Chania.
– Best time to go: Spring is ideal. Mid-summer can be far too hot. The gorge usually closes from mid to late October.

Samaria Gorge Tour from Chania – The Longest Gorge in Europe

Photo credits:
First Samaria Gorge image by Tina Bierhoff from Pixabay
All other photos are by Lindsay Soberano-Wilson.