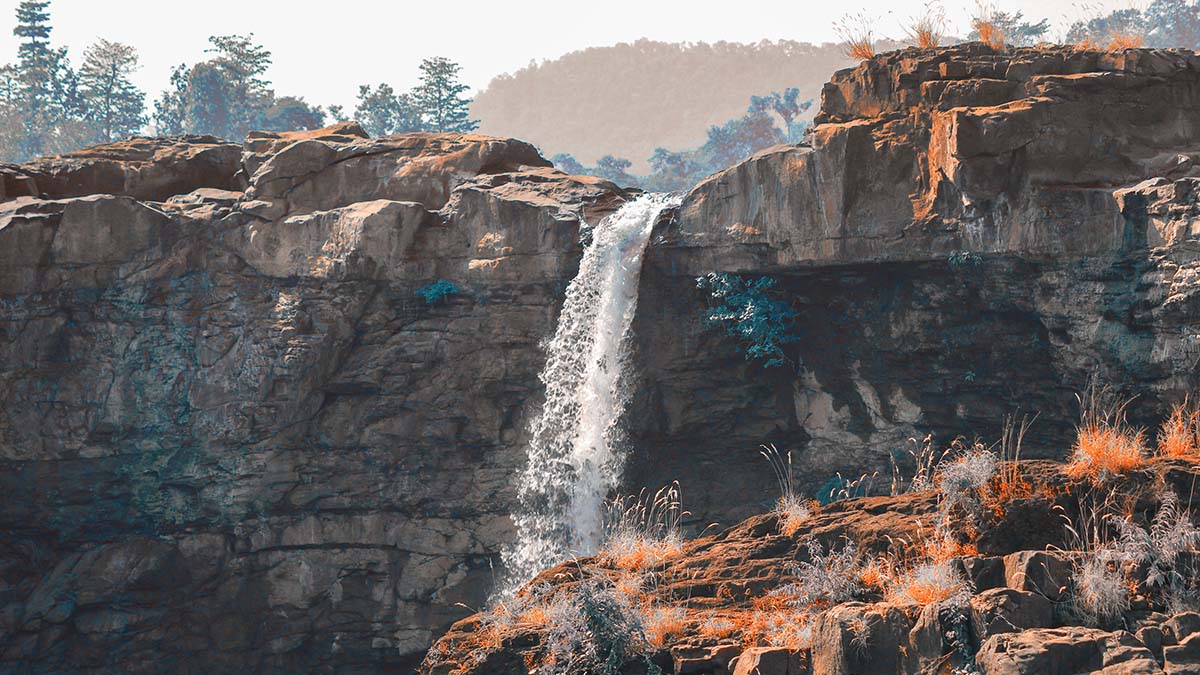 Hill stations have always fascinated me. My family and I have been fortunate to visit some of India’s best known hill stations ranging from Tawang in the Eastern Himalayas to Shimla, Nubra Valley and beyond. Having experienced first hand the joys of visiting the quintessential Himalayan hill stations of India, we decided to alter our hill sojourn a bit and gave the less commercialized Saputara a try. 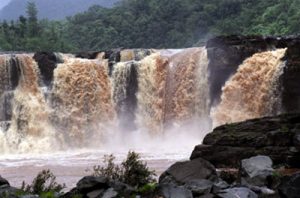 We traveled in our 4×4 from Mumbai along National Highway 3 all the way to Nashik and thereafter took the state highway to Saputara via Masrul, Vani and Borgaon. Tired after the long, but scenic, drive, we checked in at the Hotel Anando, in the midst of meadows and a shimmering lake that provided the perfect backdrop. Our rooms had stunning views overlooking the lake. Although not very luxurious, the rooms had all the basic amenities that any modern day traveler would ask for including 24 hour room service.

After a relaxing night’s sleep we woke to the chirping of the birds and the bellboy offering us aromatic cups of freshly brewed Darjeeling tea. After a hearty Gujarati breakfast, we embarked on a leisurely trip to the heart of this quaint little mountain town perched on the undulating Sahyadri hills. The combination of picturesque lakes, gushing streams, woodlands and the hilly contours made for a truly ethereal setting.

Saputara is actually located on a densely wooded highland and is at an elevation, which is all of 1000 meters. It may not be a daunting hill station like, for instance, Darjeeling or Shimla, but has enough mountain charm to captivate the spirit of the most jaded traveler. The climate is salubrious throughout the year.

Like most other Indian hill stations, Saputara has its share of legends. One of the most popular of legends has it that Lord Rama had spent the first 11 years of his life in exile in the forests of Saputara. We were told that the very name Saputara literally means the “abode of serpents” and on closer scrutiny of the gleaming Sarapagana River, we did notice the image of a snake on the river’s winding shoreline. The locals revere this snake and there is a huge gathering of devotees especially during the Holi festival. 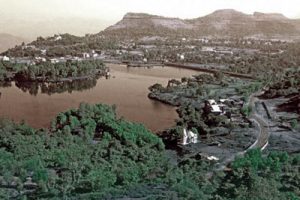 We spent a considerable amount of time at one of Saputara’s most enduring tourist landmarks – the lake and the sight of fiber boats moored at the jetty was too irresistible to resist. We hired two boats for a small fee and were granted the permission to sail for an hour. The sylvan natural surroundings and the frequent flights of avian species that dwell in the marshy areas of the lake looking for prey made for a truly kaleidoscopic vignette.

Having been on the lake waters for close to an hour paddling our way across the placid waters, our limbs were tiring and so we decided to anchor for the day. After some light snacks and a steaming cup of Cappuccino coffee at the lakeside restaurant, we were escorted to the Sunrise and Sunset points for sightseeing.

Not too far was the Pushpak ropeway, which is a rage with the floating tourist population. This one kilometer long ropeway offers the much-needed excitement to this charming hill station of Gujarat and in the evenings there is a surge of crowds who assemble at the starting point to experience the thrill of being suspended midway. Incidentally the Pushpak ropeway has the distinction of being India’s longest ropeway.

Unlike some of India’s other popular hill stations like Darjeeling, Shimla and Shillong, Saputara came to the forefront only after India’s independence. So it is not surprising that the ambience is very “Indian” or “desi” in complete contrast to the colonial hill stations of India.

Saputara is the bastion of the tribal Dang community and one of the best places to savor the fascinating culture and heritage of this tribal community is the Tribal Museum. The museum showcases the very best of the exotic Dang tribes, their way of dressing, tools they use, their skills as craftsmen, especially their intricate pottery designs, weapons and their colorful festivals are highlighted at this unique museum. The Dangs dwell in the outskirts of Saputara and live in peaceful coexistence with other lesser known tribes like the Bhils, Kunbis, Warlis and the Gamits, thereby rendering a truly fascinating cultural landscape which the inquisitive tourist finds truly remarkable in terms of tribal diversity. 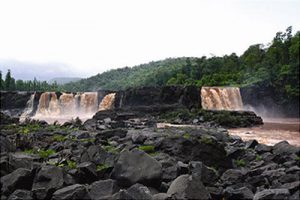 We visited Ahwa, located at a distance of a mere 44 kilometers from Saputara where the Dang and other tribal communities have a sizeable presence. Here at Ahwa, technology and modernity is yet to penetrate and it is one of the most virgin of tourist locales in Gujarat’s tourism landscape. During the village fair, which usually takes place during the festival of Holi, Ahwa is a riot of colors with tribals engaged in celebrations with their colorful dance, drama, music and folklore. During the British rule, there was the practice of conferring Privy Purse to the Adivasi rulers from the local British agent.

The drive to Ahwa is beautiful, past gleaming mountain streams and every now and then the sight of picturesque Dang village hamlets. However, in terms of tourist amenities, in spite of being a district headquarter, in Ahwa there isn’t even a hotel where one can make a stopover.

For those with a penchant of the haunting wilderness, a visit to the Vansda National Park can be a very rewarding experience. In the day’s of yore Vansda used to be the royal hunting reserve of the Maharaja of Vansada. To visit this sanctuary, you must obtain permission from either the Chief Wildlife Warden at Gandhinagar or the DFO Ahwa. Although Vansda is not all that big in terms of area covered, it still offers plenty of excitement.

We were interested in bird watching and had come with costly equipment (Nikon, Canon etc.) fitted with a powerful lens. Even though the visibility was poor, since the sky was cloudy and it was raining, we managed some very good shots. All the homework that we had done prior to each days wildlife outing like comprehensive information about the routes – both popular as well as the offbeat ones, the location of swamps etc. helped us tremendously in our Bird Watching activity. We were amazed by the sheer variety of avian species on offer at Vansda.

We were told that the national park harbors a few tigers, leopards as well as the four-horned antelope but unfortunately luck was not in our side and we had to be satisfied with the sight of a herd of spotted deer, pangolins and the rusty spotted cats. 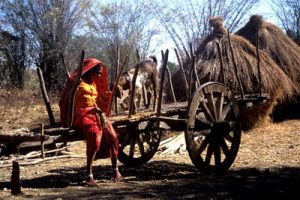 Apart from the Vansda National Park, there is another equally captivating wildlife reserve – the Purna Sanctuary. The resident Forest Officer was kind enough to arrange accommodation for us by way of a “homestay” with a local Adivasi family, which not only offered a fabulous first hand experience of the lifestyle of the indigenous tribal people of this region, but also made our forays into the forests of Purna Sanctuary that much more thrilling as our host who knew the topography of the sanctuary, accompanied us on our trips inside the forest.

The picturesque town of Waghai located at a distance of 79 Kms. from Saputara, is renowned for its Unai Mata Temple. The presiding deity is believed to be very potent and most visitors to the temple take a dip at the hot spring located in close proximity to the temple before offering their prayers to the goddess. The main town is conspicuous by its bustling bazaars and the locally made sarees can be great souvenir items.

In terms of trekking, Saputara and its surroundings have numerous well-defined trekking trails. Most trekkers to Saputara love to soak in the utter seclusion that the thickly forested hills of Saputara provide. Trekking in Saputara is different from trekking in other hill stations, in that the elevation of 872.9 meters isn’t all that formidable and you will be surprised to find many cash rich and middle-aged Gujarati folks, embarking on soft treks in and around Saputara. Even Mumbaikers find Saputara to be more congenial then Igatpuri and Lonavala, which even a few years back used to be the favorite trekking destination. The prospect of the cool mountain air and the mist laden late evenings makes for a perfect rejuvenation and attracts both the amateur as well as the professional trekkers. 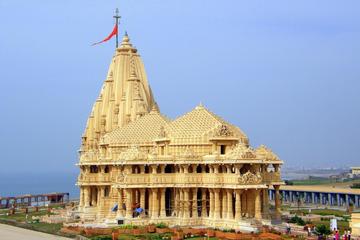 Being a small and less commercialized hill station, Saputara doesn’t offer much variety in terms of accommodation. There is the government run Toran Hill Resort (Tel: +91-02631-237226), which is very popular.

There is the privately run Hotel Anando located ideally on the lakefront which offers 24 well furnished rooms with running hot and cold water, channel TV and 24 hours room service. The hotel offers facilities for indoor games and an exclusive playground for children.

Saputara’s only 3 Star hotel – the magnificent Shavshanti Lake Resort located strategically at the Nageshwar Mahadev Road, is quite a rage with the up market tourists.

Carry sufficient cash, as there are no ATMs in Saputara and credit cards are not accepted.

Photo credits:
First Saputara waterfall photo by Raj Lad on Unsplash
All other photographs are by Subhasish Chakraborty.