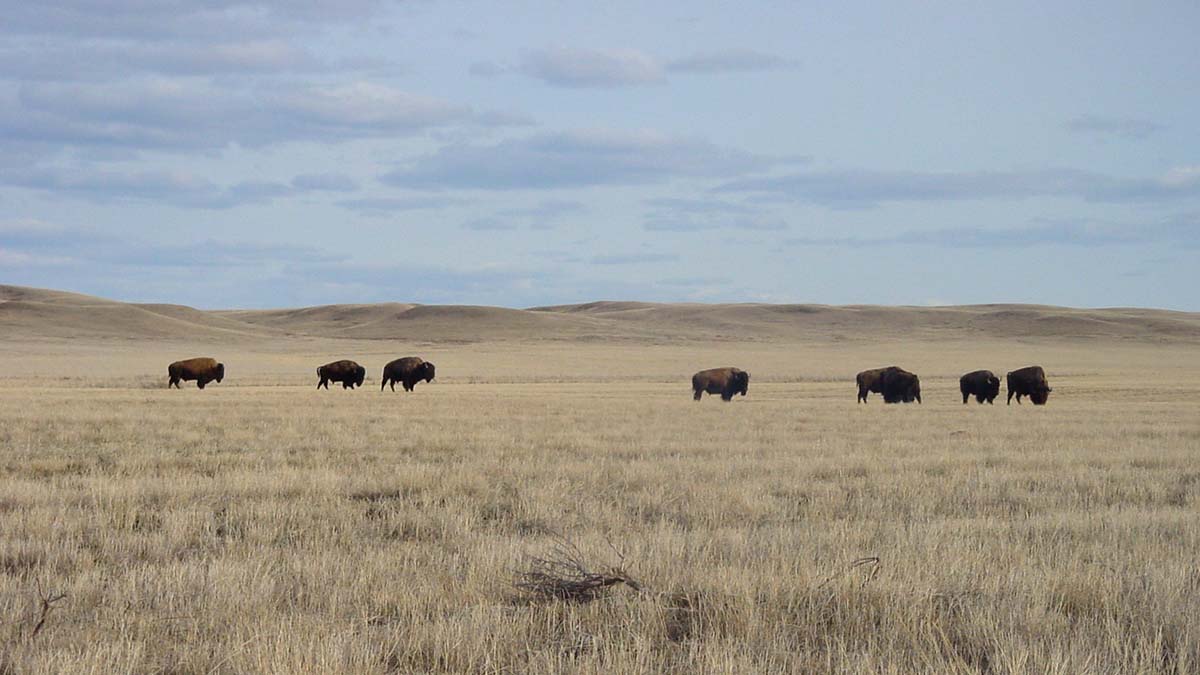 From Blackfoot Hills to Outlaw Caves

“Let’s take the route through Old Wives” I said to my friend as we prepared to leave Regina for a trip through southern Saskatchewan. Saskatchewan is crisscrossed with a myriad of highways so the choice of routes seemed endless. Old Wives appealed to me because of the legend I had heard surrounding its name. Many years ago there was an encampment of Cree at this site. Further away in the hills the Blackfoot were waiting to attack. The old Cree women, so the story goes, said they would keep the fires burning while the others sneaked away during the night. At sunrise the Blackfoot swooped down to find to their surprise a bunch of old women. The name, “Old Wives” was born. Drawn by this romantic story we headed west on the Trans-Canada highway to Moose Jaw then southwest on Highway 363 which would take us through this village of Old Wives just north of the lake by the same name. But Old Wives, like many small towns in Saskatchewan was elusive and it seemed to have disappeared like the wisps of the smoke from the campfires of the people that pre-dated the inhabitants of that village. This is Saskatchewan – one is often surprised by what is there as well as what is not there.

A large world class art gallery, therefore, is not what one would expect in rural Saskatchewan. As we approached Assiniboia at the junction of Highway 13 and 2, I recalled having heard about this gallery, an endowment by a local man made good. We watched for a sign on the highway but saw none. Driving through Assiniboia though we found it. After viewing the art we sat down to a drink in an elegant lounge. 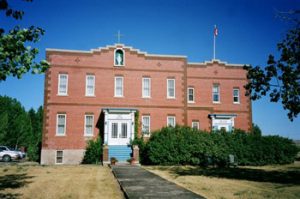 Later that evening at the Convent Country Inn at Val Marie, further southwest at the junction of highway 18 and 4 one of the owners responded to our tale of looking for the art gallery. She said with a smile, “This is Saskatchewan, You are supposed to know where things are.” Expecting a signpost is not part of the mystique.

Val Marie, in ranch country is at the site of the Grasslands National Park. Catholic sisters living in this former convent in a barren land a century ago is hard to fathom. The bunk beds in the small sparse rooms at this bed and breakfast give an idea of the severity of their lives there. The loneliness of the wind, which blew harshly all night, was all consuming. The wind piano sitting on the prairie grass out in the yard played its own eerie tune.

Our hike with a parks guide the next morning took us up as high as Seventy Mile Butte. We learned about the plants and animals and the history of the area. I wondered how the tipi-dwellers had dealt with the now extinct prairie grizzly bears. Seventy- Mile Butte is a high spot between Fort Walsh to the west and Wood Mountain to the east and marks the halfway point between these two posts of the Northwest Mounted Police. 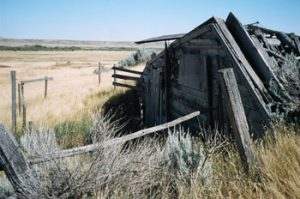 Driving that afternoon through the other block of the park we marveled at the vibrant grasses that were being rejuvenated by the introduction of indigenous bison into the area. The contrast with the grasses in the ranch land outside of the park was evident. We wandered in awe through the prairie dog town. One could almost feel how the early explorers must have felt. No one in sight as far as we could see except the busy prairie dogs darting in and out of their mounds separated by the dry cracked earth yelling signals and messages back and forth to each other. In this block we also saw, protruding out of a hill, the ruins of the homestead of Will James the artist, author and cowboy who had once lived there. 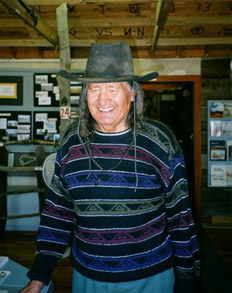 We headed again across the hills and gullies – this time east along Highway 18 to Wood Mountain where we were to meet Sitting Bull. The Interpretive Center there told us about this famous Chief and how he sadly ended up in a rodeo south of the border. A long-braided man from the nearby First Nation added color to the park. He told us that he was the last descendant of Sitting Bull. The skepticism of some of the locals hinted at the difference in the two cultures sharing the land. Learning that Sitting Bull had had four wives seemed to make it quite plausible that he still had descendants in the area.

Further east we viewed the petroglyphs at St. Victor before heading out for Willow Bunch. Upon asking directions someone pointed out of town along a gravel road assuring us that was the way to Willow Bunch.. As we drove out my companion said, “I wish there was a sign that said Willow Bunch.” By this time though we were learning the ropes of traveling through Saskatchewan. One never knows what’s coming next and that means adventure. 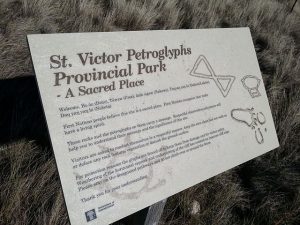 Through spectacular rolling country we did arrive at Willow Bunch. Willow Bunch was famous for Edouard Beaupre (1881-1904), the Willow Bunch giant – another person in southern Saskatchewan, who, like Sitting Bull had become a spectacle for the curious. He had ended up in a circus. The well-done Willow Bunch museum illustrated much of the local history. “The History of the Metis of Willow Bunch” an award-winning book by Rivard and Littlejohn gives a very good account of the history of this community.

The final leg of our trip was to Coronach where we had booked a room at a bed and breakfast out in the country. To our surprise when we arrived at the bed and breakfast there was a note on the door saying to make ourselves at home. Mom and Dad would be home later. This seemed very unusual but we did just that. Found our rooms upstairs in the farmhouse; deposited our luggage there, then decided to sit outside in the long-shadowed prairie evening. The spectacular sunset drew us out the lane and down the road. We watched the sun descend at the end of the straight gravel road thinking all the time how fast the earth was spinning beneath our feet. It was not the sun that was moving.

The sudden chill sent us indoors where we spent time reading the Western Producer, watching TV, doing yoga while we waited for the owners to come home. The moon rose, shone in the window, the dogs barked, it got darker and darker and we began to feel uncomfortable. We were in a strange house, late at night, seemingly now in the middle of nowhere. Suddenly we decided we had to leave and we drove into town where we doubled over with uproarious laughter as we collapsed into the motel room. Another adventure while traveling in Saskatchewan. 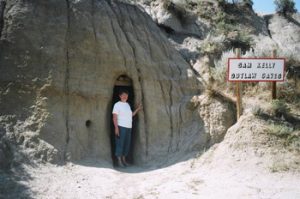 Our last day was an all-day tour in an air-conditioned van of the district known as the Big Muddy. Everything to see from spectacular natural wonders like Castle Butte to the Sam Kelley Outlaw Caves, just over the hill from Montana. Lunch spent in the art gallery of a ranch where the artist rancher regaled us with the stories of the outlaws of the Canadian West. There was the buffalo effigy, the only one in Canada and the prayer pole tied with colored cloths at the top of a hill where First Nations came for sacred ceremonies. The lady from Scotland on the tour referred to the tipi rings and stone effigies as Saskatchewan’s Stonehenge and she did a double take when we stopped at a one-room school named Paisley, the same name as her school in Scotland. The museum at Big Beaver, near the American border told yet another version of the Sitting Bull story.

Our trip had come to an end. We had brushed with the ghosts of the past that are still hovering around today – ghosts of the original nomadic inhabitants and those of the small towns belonging to another era that used to dot the grid of Saskatchewan highways. We learned that traveling in Saskatchewan is unique and exciting.

About the author:
Bev Lundahl is a genealogist by nature thus most of her writing is historical, based on her research. She has been published in The Beaver magazine, Folklore Saskatchewan, The Heritage Gazette of Trent Valley (Ontario), Lifestyles (Estevan, SK) and some of her research has been used on CBC Radio as well as in various Canadian newspapers. Bev lives in Regina Saskatchewan.