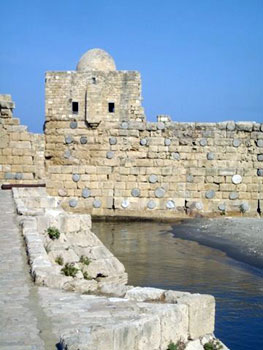 ‘I want to see the soap museum”, I told my cheerful but thoroughly ignorant driver who had taken me on my day trip from Beirut to Sidon. Just my luck to have picked one of the few Lebanese taxi drivers who spoke neither English nor French and, to top it all, what few words of Arabic I pronounced he didn’t understand either. I came prepared though and shoved my map under his nose where the site for the museum was clearly marked and the name written next to it..in Arabic. I guess, he couldn’t read either because for some reason he seemed to think I wanted ‘seafood’ and steered his chariot towards one of the floating restaurants moored next to the crusader Castle of the Sea.

In despair I shouted: saaabuuun, making the word up as a combination of what languages I know. Lo and behold, it did the trick, he did a U-turn and headed for the medina.That was more like it because the main reason why I had come to Sidon was to explore one of the oldest and most remarkable souks of the Middle East. 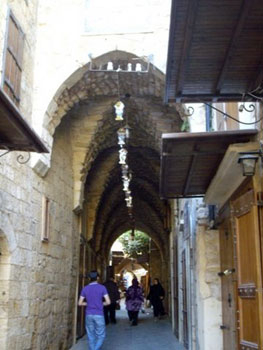 Saida, or Sidon is of course very, very old, about 4000 years to be precise. One of the most important Phoenician city states Sidon has a long history of art, craft and trade. The skills of her craftsmen were even praised by Homer. Therefore it doesn’t come as a surprise that countless workshops are still productive to this day and they are all housed within the walls of the medieval old town.

Entering through one of the massive, arched gates, I was immediately confronted with a vaulted maze of narrow, winding alleyways and cross streets. The entire medina is covered, not with straw mats like in Morocco, but with stone. The buildings are several stories high and some levels can only be reached by ladders and extremely dangerous looking stairs. Some of the workshops are carved out of the rock and look more like caves than shops.

It’s easy to imagine the hustle and bustle of the times when Sidon was a thriving port town exporting her famous glass wares and purple dye. Nothing much has changed and the craftsmen still ply their art with age old tools. 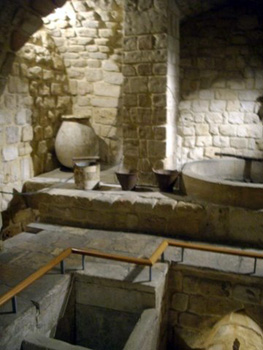 The word saaabuuun again worked its magic and I was finally directed to the olive soap museum which I had particularly come to visit.

Housed in a building which dated from the 17th century, the museum shows the entire process which goes into making the olive soap of the region as well as documenting the history of the hamam. The interior was transformed and restored thanks to the Audi Foundation, created by a wealthy family from Beirut. And the scent…it wafts out into the alley in front of the entry where it mingles with the appetizing aromas of freshly baked manouche and spicy köftes.

After meandering through the several rooms and admiring the towers of soap bars which are piled up high for the soap to dry, I went into the museum shop where I found a wonderful selection of the finest soaps, lotions and creams as well as hand embroidered towels and bed linen, a shoppers paradise and a true gift haven. 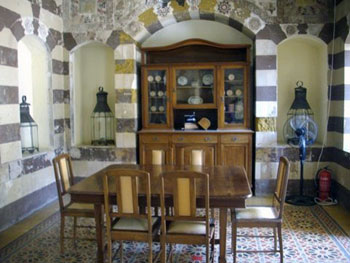 But the medina has even more to offer. Mosques, churches and palaces are wedged into the narrow alleys and sometimes only recognized by looking very closely. As is the case of the Palais Debbane, an Ottoman palace which reveals its treasures only once you have climbed a steep stone staircase and entered through a narrow door.

What lies behind though is one of the finest examples of Ottoman/Arabic art and architecture, four stories high and with a roof terrace which reveals the entire extend of this exceptional medina, the center piece of the biblical city of Sidon, inhabited and very active to this day.

The best time to visit the Lebanon is spring or fall. Summers can be very hot and humid and winters cold with lots of rain.

To visit Sidon from Beirut it’s best to hire a car and river. A half a day costs about $50. Agree a price in advance. The are buses running from the central bus station in Beirut, but the station is difficult to find, schedules are very uncertain and all destinations on the buses are written in Arabic.

English is widely spoken and so is French. many road signs are bilingual, but not the indications on any public transport.

Having a car and driver has also the advantage to have some one with you to walk through the maze of the kashbah. It’s easy to get lost, so an additional pair of eyes is helpful

All photographs by Inke Piegsa-quischotte.