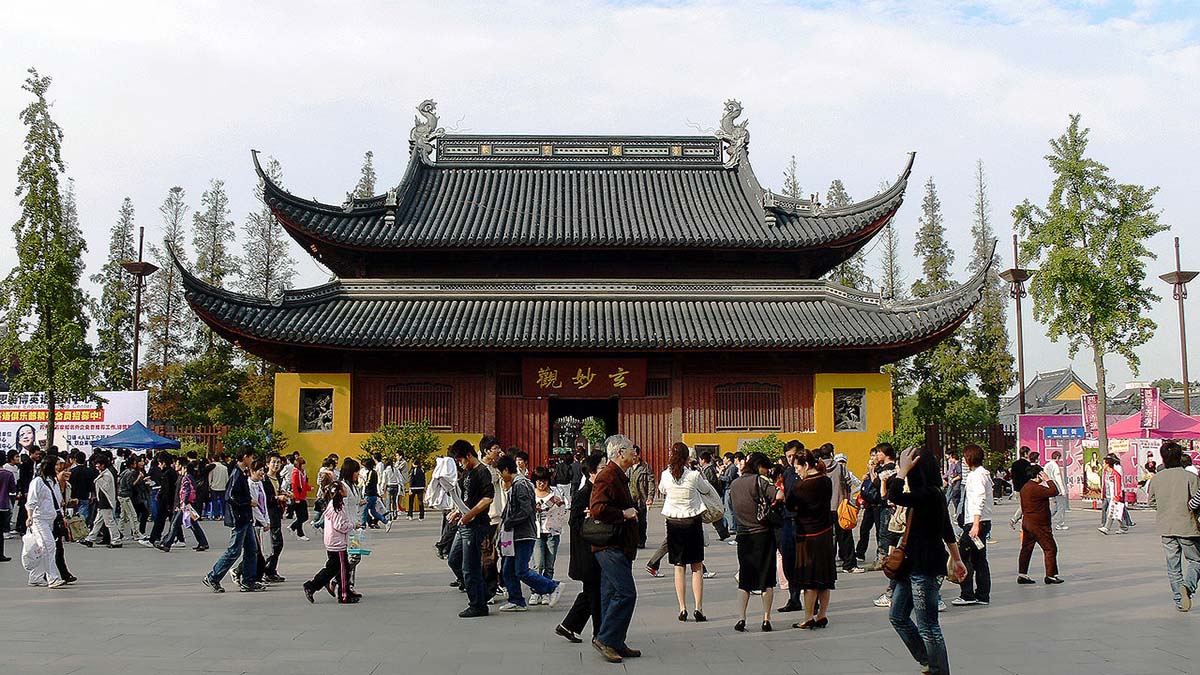 Few places on earth are as diverse and spectacular as historic Suzhou (pronounced “Sue Joe”). Suzhou is known as the Water City. Marco Polo himself named it “the Venice of the East” because of its canal system. Suzhou is also the Garden City and once had over 100 classical Chinese gardens of which only 69 now remain. Bind these two together with silk as Suzhou is also the City of Silk due of its 2500 year history of silk-making and you have what the Chinese refer to as “paradise on earth”.

You can visit this paradise as a day trip from nearby Shanghai by means of the bullet train or through an organized tour. Where do you begin? You go straight to the Master of Nets Garden. 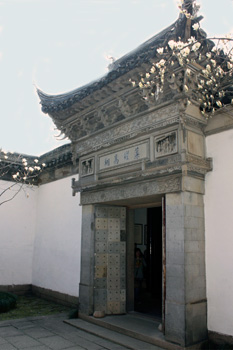 Originally laid out in 1140 CE during the Song Dynasty, this garden was abandoned for six centuries before being restored in 1770 by a retired official in the Emperor’s court. This frustrated official indicated that he would rather be a fisherman than a bureaucrat which is how this garden derives its name – Master of Nets Garden. This garden of earthly delights is hidden inside the owner’s yard and was intended for his own pleasure.

Located off of a blind alley to the south, you pass over a high threshold, designed to keep evil spirits out, at the front door. If you didn’t know you were entering the premises of an important person, the gateway, flanked by enormous carved stone blocks, should have tipped you off. Even if this was still too subtle, passing into the Sedan Chair Hall with its 500 kilogram mahogany seat is a little more obvious.

Grace, our tour guide, leads us into the family residence on the eastern side of the property. The Reception Hall is for more formal gatherings and where the family received people who were not close friends. Laid out according to Confucius’ teachings, men were situated on the left side of the room and women were on the right. The hosts were seated in chairs along the back wall. Grace pointed out that all of the buildings were situated so that you could easily access the garden from any room on the property. Furthermore, if you carefully studied the delicate lattice grating on the windows, you would find that no pattern is ever repeated on the property.

The next room, the Beauty Within Reach Tower, was for entertaining close friends and individuals of higher social status. If games and songs were not sufficient, guests could recline on a divan and smoke opium to while away the hours in a lotus dream. 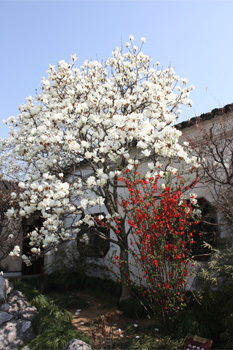 Grace mentioned that neighboring families would compete for the best garden. If one family had a pavilion constructed for a particular purpose like music or art, the other families, not to be outdone, would do the same and then downplay its significance.

Exiting this room, you find a courtyard with inlaid rock designed like a bat, the symbol of happiness in China. A nearby magnolia tree was displayed in its full splendor, blooming with white flowers, at the time of our visit.

Passing into the next building on the north side of the garden, you find the Study of the Ethereal, a room reserved for schooling. Private teachers and tutors were invited here not only for the children’s education but that of the owner as well. Looking at the wall, you find shelves filled with various tomes up to 15 centimeters thick.

After viewing this room, you have the opportunity to wander around the garden. On the path just outside, you may wish to sit on one of the benches along the water and admire the intricately balanced design of your peaceful surroundings. Although the Master of Nets is the smallest of all Suzhou’s gardens, the subtle combination of buildings, rocks, water and plants create an illusion of spaciousness, tranquility and harmony that you instantly feel as you walk down its zig zag pathways. At the center of the garden you find a small pond about 440 square meters filled with lotus leaves and a school of large orange-colored carp who seem oblivious to the stresses of the outside world.

Rock sculptures abound at strategic locations around the pond. Nature creates the Swiss-cheese-like limestone boulders in the local rivers and man arranges them into artistic structures. Grace tells us that the most valuable boulders not only have unusual shapes but the most holes in them. The number of holes is determined by placing the large stones inside a fire and having the smoke pass through them. 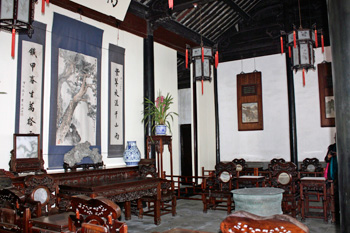 On the east side of the pond, you find the hexagonal Pavilion for the Advent of the Moon and Wind whose image reflects off the calm water. Find your way there by crossing the narrow one-foot wide bridge but be careful or you will become one with the pond.

After you re-cross the bridge, double back toward the northwest corner of the garden and enter the Late Spring Study. Inside you find Ming Dynasty period mahogany furnishings, lanterns and scrolls. A replica of this room may be found in the Metropolitan Museum of Art in New York City. You will also find other art works – silk pictures – for sale in some of the pavilions on your way out as a reminder that you that you are in the City of Silk.

After you make your way to the exit at the front door of the garden, travel to your next destination which is gondola ride on the oldest and longest man-made water way in the world – the Grand Canal.

A Gondola Ride on the Grand Canal 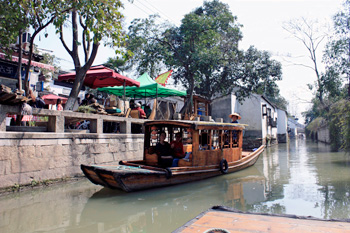 The Grand Canal, flowing from Beijing to Hangzhou, is 1,795 kilometers long. Segments of the Grand Canal were started as early as 496 BCE but it was only joined into one long artery during the Sui Dynasty (581-618 CE). Over the subsequent centuries, parts of the canal fell into disuse and became blocked up so it is not longer possible to travel to Beijing by water. Fortunately for you the Suzhou segment remains intact and the historic section of the city is still accessible by water. This is your opportunity to enjoy a 40 minute boat ride through some of the most scenic sections of this ancient city.

An elderly river pilot helps us down into his weathered, light brown boat and directs us inside a glassed-in seating area. Remaining outside at the stern, he propels the boat manually with a single oar. I wondered how a man of his age could pilot a craft like this all day just to make a living but from where I sat, he seemed to direct the gondola effortlessly. All the same, he was quite happy to let some of the passengers pilot the boat at times. 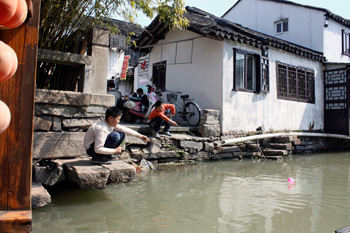 Over the course of our gondola ride, the width of the canal varied from about 1.5 to 6 meters wide. Along the route, the height of the greyish side walls varied. In some locations, these consisted of the 5 meter high back walls of stone homes that were over 450 years old. Along the route I began to understand how a rat feels as it runs through a maze. This feeling quickly vanished as we passed under the first of several elegant stone pedestrian bridges spanning the canal.

An occasional pathway and set of stairs between the houses allowed the locals to fish down at the water’s edge. As we passed, two boys were casting their fishing lines into the murky greenish brown water. At other locations along the canal, vendors could be seen hawking their goods in small plazas at the top of the wall, strategically situated to take full advantage of the view and the customers who gathered to enjoy it.

As the end of our gondola tour approached, our river pilot suddenly broke out in song like his Venetian counter-part. He may have been singing Chinese opera or local folk songs, I’ll never know, but as he concluded, we arrived at the dock. We disembarked from the boat and began the short walk to our final destination – the Temple of Mystery.

[TOP PHOTO] No trip through an earthly paradise would be complete without visiting at least one temple. The Taoist Temple of Mystery, first established in 276 CE, is more appropriately named the “Mysterious Essence Temple” perhaps because of the smell of incense being burned. Arriving on site, your first destination is the Hall of Three Purities (San Qing Dian) with its yellow walls capped by a double roof each with upturned eaves, dating to 1181 CE.

Passing through the front entrance, you come across an altar filled with offerings of apples and oranges. Worshippers kneel on cushions and bow to various statues while at the same time being immersed in the smell of burning incense.

The three main gods for which the hall is named are those facing you in the center of the room as you enter; the solemn, imposing Yu Qing (Jade Pure), Shang Qing (Upper Pure) and Tai Qing (Great Pure). Your eyes are drawn to a large black tablet to the left and behind the trinity with the engraved with the figure of Lao Tzu, the founder of Taoism.

Walking around the hall, you might be overwhelmed by the number of Taoist gods sizing you up from their glassed-in places of honor. A number of these gods carry traditional Chinese weapons so you may wish to stay on their good side. All of the statues in the temple are made from clay and then covered in gold.

Exiting the Hall of Three Purities, you now have the opportunity to visit a number of lesser halls on site dedicated to individual Taoist gods such as the god of careers who determines your ideal career or the god of wealth whose own hall of worship seems to be set in the midst of prosperity. If you haven’t noticed it already, the Temple of Mystery is situated in the center of a great bazaar. This shopping area begins your transition from paradise back into the real world. At this point, you may wish to take some time to wander around and find that perfect souvenir.

Your day trip through paradise ends when you exit the temple grounds. However believing that paradise is merely a state of mind will serve you well when you are caught up in heavy traffic on your return to Shanghai. 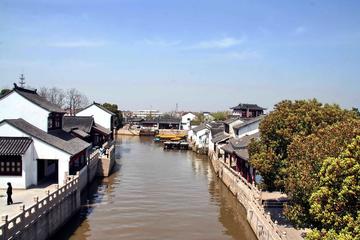 ♦ Your boat ride starts from the canal south of the train station. Depart from the Foreign Travellers Transportation Company Pier on Chenzhan Lu. The cost was 130 Yuan per gondola at the time of my visit for a 45 minute ride but prices may vary.

♦ The Temple of Mystery is located at Tuan Qian Jie. Admission is 10 Yuan. 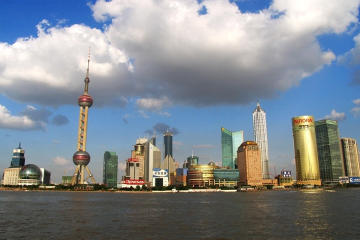 Photographs:
Top photo of Xuan Miao Temple by Gisling / CC BY-SA
All other photos are by Diane Gagnon, a freelance photographer who has has traveled extensively in North America, the Caribbean, Europe and parts of South America. Her photographs have accompanied Troy Herrick’s articles in Live Life Travel, Offbeat Travel and Travel Thru History Magazines.