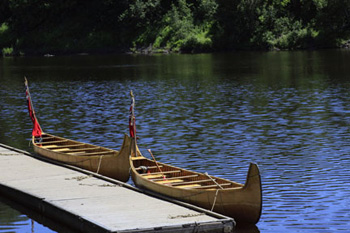 Located on the Kaministiquia River just outside Thunder Bay, Ontario Canada, Fort William is a 40-building reconstructed fur trading distribution post setting on 25 acres. Operating from 1803 to 1821, this was the Northwest Company’s inland headquarters and distribution center where canoe brigades would come in from the remote outposts each July heavily ladened with baled furs and return back with the supplies they needed to “winter over” another year back at their outpost.

To get the furs to Fort William, the 90-pound bales of furs were loaded into 25-foot Northwest birch-bark canoes, along with the outpost’s agent and supplies needed for the trip, and paddled on the liquid highway by four to six voyageurs. Each canoe carried up to 1-½ tons of cargo and people. The canoes were developed by the Ojibway Indians in the area and the Northwest Company went to great lengths to keep their competition from having access to that flat-bottomed canoe, the perfect watercraft vehicle to navigate the shallow rivers and streams of Northern Minnesota and Lower Canada. The Hudson Bay and American Fur Companies use the less efficient “York” canoe.

Once at Fort William, the bales were unloaded and accounted for by the outpost agent and a Fort clerk. The canoes were brought to the canoe shed to get resealed with pitch and birch bark replaced, if needed, in preparation for the trip back to the outpost. Then it was time for the ‘engages’ – voyageurs engaged in a contract with the Northwest Company, to enjoy their reward of a meal consisting of bread, butter, cheese and rum. During the Great Rendezvous, the population of the fort swelled from a normal 200 ten months out of the year to around 1,200 for up to two months. 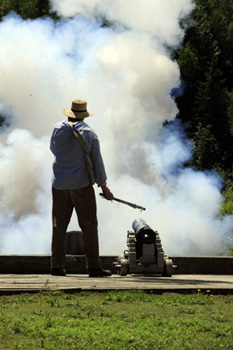 The brigades coming in from the Yukon in the far west stayed about a week at Rendezvous before they had to start back to the outpost before the rivers froze. Those coming in from closer outposts, such as one of the Fond de Lac’s outpost on Minnesota’s Snake River (near modern day Pine City, MN), stayed longer.

To get to Fort William, they paddled down the Snake River to the St. Croix River. Then, up the St. Croix, portaged over to the Brule River, paddled up the Brule and into Lake Superior. Once on the lake, they would paddle around the south end of the lake and then head north up the west side of the lake. Once they reached the Kaministiquia where it empties into the lake, they would paddle up to Fort William.

Once all the brigades had brought in their furs, the bales were loaded into 35-foot “Montreal” canoes and paddled to the Northwest Company’s headquarters in Montreal. Considerably larger than the Northwest canoe, each Montreal could haul up to four-ton of people, bales and supplies. These larger flat-bottomed birch-bark canoes were normally paddled by eight to ten voyageurs for six to eight weeks to make Montreal while the waterways were still free of ice. 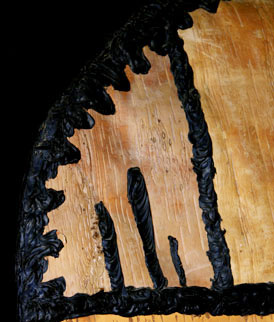 Today, you can experience Grand Rendezvous the second weekend of July each year or explore the fort anytime. I wanted to experience what is was like paddling a Nor’west canoe on the Kaministiquia River just as the voyageurs did in the early 1800s. Free 20-minute trips leave the wharf several times each day between 10:00 am and 2:00 pm. Don’t worry – each of the six to eight modern “voyageurs” per canoe must wear a lifejacket and learn the commands of paddling. Each canoe has a period-costumed experienced bowman in the front and a steersman in the back.

The job of the bowman is to set the paddle stroke pace for the voyageurs and watch for any debris ahead that could possibly damage the canoe. Generally, voyageurs paddled at the rate of one stroke per second for 50 minutes out of each hour. Then, they had a 10-minute rest break to smoke. On a good day without portages, a canoe could make 60 to 80 miles. Mostly illiterate, voyageurs did not keep track of distance by the number of miles or the number of hours it took to cover a distance, but by the number of smokes. So, they might refer to the day’s distance as having gone 6 smokes. For that brief 20-minute period of time, I was “there” – a voyageur back in 1815. 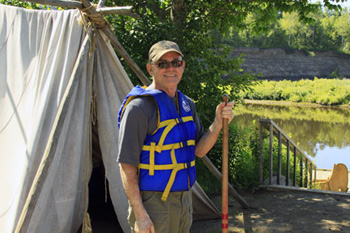 Once back at the wharf, I walk toward the main gate leading into the fort. Just before going under the gate archway, on the right is a small voyageur encampment. One of the voyageurs just finished cooking some fish over the campfire. The voyageurs were not allowed to stay inside the fort palisade. The fort interior was reserved for gentlemen, such as clerks, bourgeois and tradesmen, along with the elite of the company – the company partners.

Once inside, the centerpiece of the fort is its Main Square. Most of the important buildings surround the perimeter of the square. Inside the Apothecary we find “Doc” and his wife. When asked what kind of typical conditions he normally treats, he tells us two of the more common among voyageurs are foot rot and constipation. 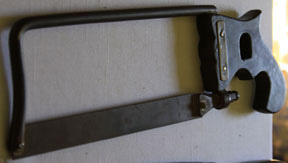 I scanned the room looking at his equipment and “medicines” and noticed a saw lying on a table. Doc explains the limb amputation process and that he used it as a last resort – the success rate is not good as only about one out of every two ever healed and lived. Most of the amputees succumbed to infection. Those requiring long-term convalescence were moved to the hospital on the other end of the square. An amputation ended the person’s employment as a voyageur. Voyageurs needed both strong arms to paddle for weeks on end and both strong legs to haul the equipment over portages, some as long as 14 miles.

Inside the Fur Stores is a scale with a 45-pound sack on one end and enough furs on the other end to balance it. Two 45-pound stacks of furs were then moved to the baling press. Baling cloth, called Russia Sheeting, was laid on the press plate first. On top of that, a tanned deer skin was laid with the hair-side down on top of the cloth, then the 90-pound stack of fur. The deer hide was brought to the top of the bale as was the cloth. Between the cloth and deer hide, the fur pelts stayed dry. The press was screwed down compressing the fur stack into a compact 90-pound bale. Each voyageur carried two bales at one time at each portage. Many of the portages were long and usually several portages were required each way of a trip. 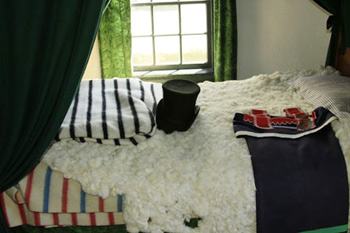 In the kitchen and bakery, three “cooks” are busy preparing fare for the noon meal. With fowl hanging and some already cooking in the reflector oven, one cook is breaking home-baked bread into pieces in preparation for making bread pudding. Another is cutting scallions as one ingredient for use in a prepared dish. With 1,200 in camp, it was a busy two months for the cooks keeping up with the hungry demands.

On the far side of the Main Square, we visit Trades Square where we see the tinsmith, blacksmith, armorer, tailor, carpenter and cooper all busy working their trades in their own shops. The path takes us to the Outfit Shops. Here the supplies that came from Montreal in the spring are divided up into packets of 90-pound bales of supplies the voyageurs will take back to the outpost. Each packet of bales contained everything the outpost needed to winter over until they arrived back at Fort William the next July. Also in this warehouse, voyageurs could buy anything they needed for personal supplies, such as a new tramp line, a harness that attaches to a bale and has a wide leather strap that is placed on the forehead. While at the fort, we saw a voyageur carrying a bale with a tramp line and he had a small keg on top of the bale. 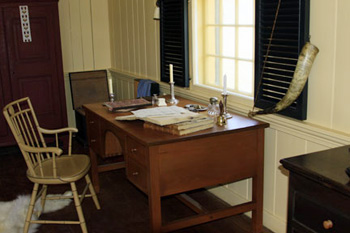 Our final stop is at the Wintering House of Kenneth McKenzie and his family. McKenzie was the Northwest’s chief operating officer at Fort William. Officially established in 1784, NWC was actually a loosely knit coalition of independent traders based in Montreal that operated under an arrangement of agreements with fur traders and Indians in the interior. They never did have an official charter as did their rival the Hudson Bay Company. At the head of the company was Simon McTavish, a Scottish Highlander, who ran the company from its beginning until his death in 1804. Each summer for a couple of weeks, he would come out from Montreal to visit Fort William. In the Great Dining Hall, a room off to the side was always kept ready for his arrival. McTavish brought three of his nephews William, Duncan and Simon McGillivray into the fur business. William rose to head the company after his uncle’s death. 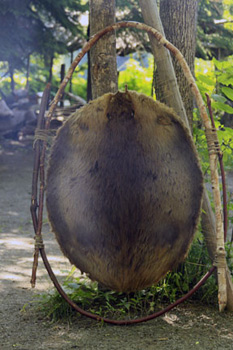 Northwest’s interior headquarters was not always located on the Kaministiquia River near Thunder Bay. Before 1803, their depot was located on the shore of Lake Superior. However, being a British company and with the border between the United States and Canada not yet drawn, they feared they would end up as part of the United States and end up paying large pay custom duties, so they moved north so they would be well inside Canada. It was a wise move as Grand Portage did end up in the United States. In 1821, the Northwest Company ceased to exist as they were swallowed up by the Hudson Bay Company, a chief rival of theirs since 1793.

At the heart of this mega-business was the largest rodent in North America – the beaver. Weighing between 40 and 50 pounds, the beaver was prized for its under-fur, the layer of “wool” that kept out the cold and preserved body heat. The longer guard hairs above it were treated with oil from the beaver’s gland making the whole fur waterproof. The under-fur was made into a “felt” and the felt made into the ever so popular hat. Beaver hats were all the rage in Europe and at the height of the business, the Northwest Company processed 100,000 beaver pelts annually through their headquarters in Montreal. The other two big names in the business the Hudson Bay Company and American Fur Company were doing the same. Native hunters would trap, skin and stretch the beaver pelts. The fur traders graded the pelts as either common or prime depending on the thickness and color of the under-fur. By mid-1800s most of the beaver had been trapped out. Although beaver was the main fur, the company also purchased mink, muskrat, fox and wolf pelts.

Native traders were usually paid with alcohol and various other items Such as combs, tobacco, knives, beads, vermillion paint, mirrors, rings and ribbon which cost the NWC very little money. Most of the trading was done during the fall and winter, when the fur was at its best. Once the rivers and streams froze, the main modes of transportation were by snowshoe or dog sled.

♦Fort William Historical Park is a reconstructed distribution post of the Northwest Company to exacting detail. While the Great Rendezvous is only held during the second weekend in July, the fort is open May 21st to October 10th. Daily operating hours are from 10am to 5pm EDT.

♦Regardless of when you go, period-costumed tradesman, voyageurs and company gentlemen will be at the fort working their jobs, much as they did in the early 1800s. The fort is complete with period tools, furniture and buildings. Resident artisans perform craft demonstrations and give modern-day visitors a true sense of what life was like for those at the fort.