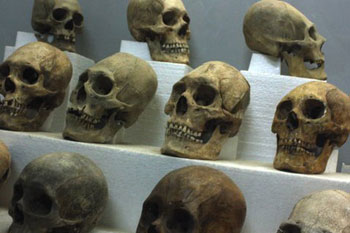 Isolated on the desolate Bolivian Altiplano, the ancient city of Tiwanaku (Tiahuanaco) is all that remains of the first great Andean civilization. An enigmatic people occupied this cold, harsh plateau for almost 2,800 years and then mysteriously disappeared around 1200 CE. Three centuries later the Incas would tell Conquistador Francisco Pizarro that “no man had ever seen the city save in ruins, for the city had been built in the night of mankind”. What the Incas didn’t know was that their empire was a successor to that of the Tiwanacotas.

Stepping out of the minibus, you are greeted with the smell and taste of dust in the air. The stark surroundings beg the question “how could anyone possibly survive here at 3,845 meters above sea level?”The 7,000 residents in the nearby town are subsistence farmers; a far cry from the 20,000 to 100,000 people that the valley once supported with the help of an intricate irrigation system. 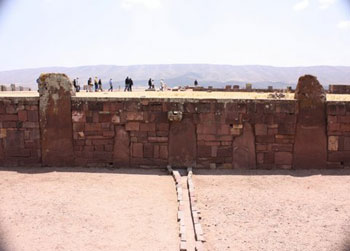 Old Tiwanaku covered at least 30 hectares; the vast majority of the site has yet to be excavated. The most outstanding structure, the Pyramid of Akapana, was constructed during the Classical Age of Tiwanaku Culture around 300 CE. At 18 meters high, this square structure consists of seven stacked platforms set over a natural hill. The present structure had to be partly reconstructed because the Spanish conquistador Oyardeburu’s demolition crew had haphazardly searched for treasure inside.

Our tour guide, Miguel, pointed to dried mud covering the lower steps of the pyramid. Over 800 years ago, Tiwanaku was located on the shore of Lake Titicaca. One year the lake burst its banks with the spring run-off and flooded the lowest terrace. Visitors should note that the shoreline of the present Lake Titicaca has receded by more than 10 kilometers since that time so there is no danger of such floods during your visit.

Ascending the stairs to the platform at the top of the pyramid was a real chore. Despite having acclimatized myself to the high altitude over the previous four days, I was still gasping for breath. The panoramic view makes up for the effort required to climb. 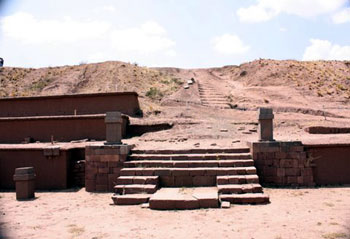 The Akapana Pyramid appears to have been multi-purpose. According to Miguel, the summit was an observatory. The astronomers worked within the bounds of a shallow, sunken, chamber open to the sky. This chamber was once shaped like an Andean Cross; a stepped-cross made up of an equal-armed cross indicating the cardinal points of the compass and a superimposed square. This cross symbolizes the three levels of heaven, earth and underworld. Needless to say, you require some imagination to see this figure. The summit holds the remains of a house whose rooms were used for preparing ritual ceremonies involving human sacrifice to the sun. 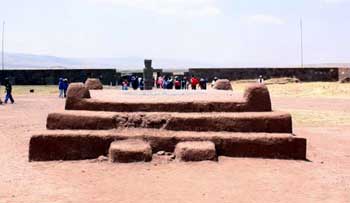 Descend the pyramid and move toward the nearby Kalasasaya Temple platform. The walls of the platform include huge red sandstone and andesite blocks, some of which weigh as much as 100 tons. The nearest andesite quarries are located at Copacabana – 40 kilometers distant. The sandstone quarries were only 10 kilometers away. The massive blocks were transported to Tiwanaku using wooden boats.

Nine water conduits protrude from the closest wall of the platform. These conduits have smooth cross-sections and polished inner and outer surfaces. Erich Von Daniken, author of “Chariots of the Gods

?” marveled at the workmanship of these water channels and wondered how they might have been produced. 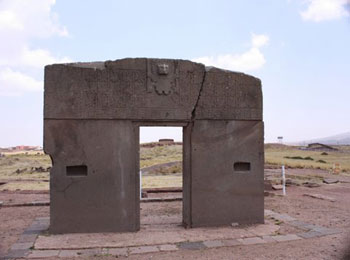 The mere eight-foot climb to the top of Tiwanaku’s most sacred temple also leaves you short-of-breath. At the top of the platform to your left is the National Symbol of Bolivia – the Gate of the Sun (Puerta del Sol). Weighting three tons, this gate is carved from a single slab of andesite. The crack in the lintel occurred when the gate was moved from its original location near the center of the platform.

The 3-meter high gate is believed to be a complicated calendar. The lintel has the sun god, Viracocha, holding a sceptre. Forty-eight relief figures represent weeks (the four missing weeks were a time of festival). Eleven small suns represent the months. If this ancient calendar is similar to our own then the missing month possibly represents the festival time as well. During the Spring and Fall equinoxes, the sun shines directly through the gateway.

Miguel leads us to the center of the platform to find a three-tiered, ceremonial altar made from adobe. He then disappears behind a nearby stone block. All of a sudden his voice is magnified through a 6-inch diameter hole in the rock. This primitive megaphone likely added an air of mystery to the sacred rites performed at the altar. 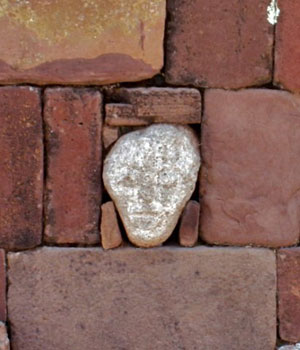 Contrasting with the raised Kalasasaya Temple, the open- air Semisubterranean Temple is 2 meters below ground level. Descending a shallow set of stairs into the open-air room, you find yourself surrounded by 175 stone faces jutting out from the walls; they might be sizing you up as the next potential sacrifice. Each of these well-worn limestone faces is unique and might possibly represent the different tribes/peoples living within the empire of Tiwanku. At its zenith, the empire stretched from present-day northwest Argentina to northern Chile. On the other hand, Miguel did refer to one of the faces as “an alien”. Perhaps the empire is a little larger than originally believed.

The Semisubterranean Temple houses three monoliths. The largest, 2.6 meters high and weighing 2 tons, has a snake on its side representing fertility. The two smaller guardian monoliths are a conspicuous white color, both 1 meter high and weighing half a ton. Visitors can view a replica of this temple in La Paz.

Exiting the archeological site you find two museums: the Lytic Museum and the Ceramic Museum. The Lytic Museum houses several large stone artifacts. The first is the Star Gate (Puerta del la Estrella). This seven-foot high brown sandstone gate is reminiscent of the Gate of the Sun. The second is the Pachamama Monolith signifying the “mother earth”. Dating to 300 CE, this 7 meter high, 19 ton sandstone pillar was once set inside the Semisubterranean Temple. Believed to be a calendar, this female figure holds two vessels. The lower section features 364 circles. The missing day is “the Festival of the Sun”. The puma on the left and the condor on the right represent the summer and winter sun respectively. 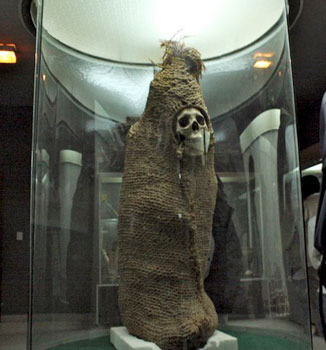 Next door, the Ceramic Museum outlines the Tiwanaku culture from its origins as a village circa 1580 BCE to the demise of the empire around 1200 CE, possibly the result of a prolonged drought and a receding Lake Titicaca.

Several exhibits are particularly notable. An Andean mummy is maintained in the characteristic fetal position by being wrapped in a brown “burlap-like sleeping bag”. Once every year the mummies were removed from their loculi in the temple and provided with food and drink. A number of elongated skulls are also exhibited. The Tiwanaku people purposely deformed the heads of chosen upper class infants using bandages and thin sheets of wood. Other displays focus on foodstuffs, pottery, weapons and jewellery.

Exiting the museum, I saw a number of Aymara Indians, present-day descendants of the original Tiwanaku people, milling around. They still visit the ancient city on the morning of the winter solstice to make ceremonial offerings of coca leaves and alcohol to the mountain gods. In some ways Tiwanaku is still alive. 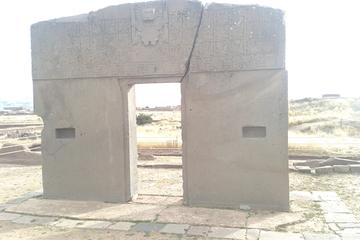 Tiwanaku is 70 kilometers from La Paz.

You can book a tour which includes an English-speaking guide after you arrive in La Paz. There are many tour agencies along Calle Sagarnaga. Calle Sagarnaga begins just outside the Church of San Francisco (Iglesia de San Francisco). The tour includes transportation, an admission ticket to Tiwanaku (including the two museums). Some tours also include a lunch.

The Semisubterranean Temple in La Paz is located at the Plaza Archeologica, outside of the stadium in Miraflores. Visitors may only view it through the fence.

Photo credits:
All photos by Diane Gagnon, a freelance photographer, who has traveled extensively in North America, the Caribbean, Europe and parts of South America. Her photographs have accompanied Troy Herrick’s articles in Live Life Travel, Offbeat Travel and Travels Thru History Magazines.