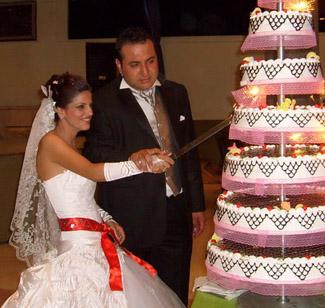 I was thrilled when I was recently invited to a Turkish wedding. The invitation immediately raised an important question: what gift to take? Tradition requires the guests to give money or gold or both. Luckily, every jeweler has a selection of gold coins, adorned with a red silk bow and a pin for just that occasion. That’s it. No wedding list, no towels or toasters.

As I approached the venue, I was greeted by a crowd spilling over into the nearby park. Plenty of children ran around, ladies stood together, men on the other side. But the separation of sexes didn’t last long.

The bride’s parents don’t spare expenses on the occasion of the wedding. Rich or not so rich, they’d rather starve the rest of the year than bringing shame to the family name by not entertaining and feeding their guests lavishly. Often, professional dancers and musicians are hired. I was greeted by the music from a traditional group from the Black Sea. Within minutes I was a member of the entire happy family and made very welcome. The music stopped and we took our seats at the beautifully decorated tables. 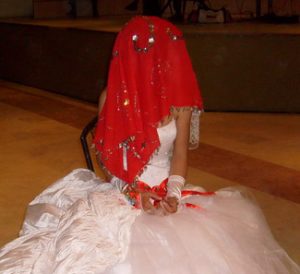 The lights were dimmed, candles were lit and the band struck up a bridal march Turkish version. The door opened and in came the bride, on the arm of the groom, not her father. She wore a white lace dress and veil and a broad red sash. Red is the color of luck and plays an important role in the wedding ceremony.

What was new to me was that the civil marriage took place there and then. A table was reserved for the bride, groom and witnesses and an official from the Town Hall married them. Signatures, cheers and they were husband and wife!

After that came the Dance of the Fathers which is an essential part of every Turkish wedding. The father of the bride and the groom take to the floor and dance around each other accompanied by the claps and cheers of the guests and the music from the orchestra. Everybody gets up from the table and throws coins and bills onto the dance floor. It’s the task of the kids, to scurry around and collect the money.

Then it was time for dinner. We were served a heaped dish of meze, the Turkish starters, followed by lamb shanks which were so tender that no knife was needed to cut them. Baklava and other sweets followed and, of course, no alcohol. 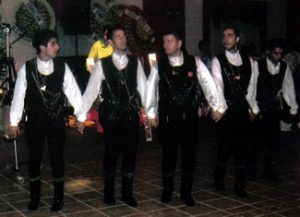 After that, the bride, accompanied by her bridesmaid, made the rounds from table to table to receive hugs, kisses, good wishes. That’s when the gold coins are attached to her sash, gold bracelets clasped on her arms and more money is discretely put into a red lined basket one of her maids carries for just that purpose.

I could already hardly breathe from all that food, when, with another roll of the drums, the wedding cake was rolled in and ceremoniously cut. Each guest got a piece and it would have been extremely rude not to eat it there and then.

Fortunately, after that, we could get some exercise hitting the dance floor. Couples dance together, women with women, men with men, everybody does as they want and has a good time. 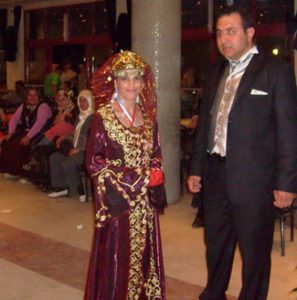 The bride had disappeared and returned after half an hour in a traditional Turkish wedding gown and head dress. Gone was the white western dress to be replaced by red, purple and gold, a dazzling sight which evoked all the splendour of 1001 nights. All the ladies all received red scarves to put around their necks and we gathered in a circle around the bride. Her hands were elaborately hennaed and so were ours. Another good luck ritual which was extended to all the female guests as well. Then it was our turn to dance around the bride, wish her good luck, happiness and many children.

A Turkish wedding is a joyous affair. What fascinated us was the combination of modern and tradition, reflected in the change of the bride’s outfit, the traditional dances and the hennaing of the hands.

Close to midnight, the newly weds and their parents said good bye to each guest and we all were given a beautifully wrapped little parcel with a piece of wedding cake in it and decorated with another good luck charm: a tiny evil eye. And the ladies got a small piece of henna to extend the luck.

At first I didn’t dare wash my hands for fear that the good luck would just gurgle down the drain. But, the stuff is quite water resistant and it took several days to fade, despite soap and water. And of course, I had my little piece of henna to renew the good luck whenever I wished. 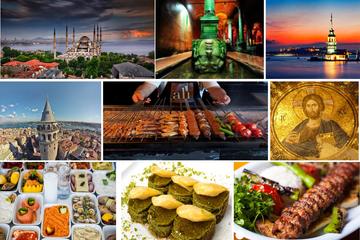 About the author:
Inke Piegsa-quischotte is an ex-attorney turned travel writer and novelist. She writes for online travel magazines and has published two novels and a travel guide to Galicia/Spain. She lives between Turkey and Miami.