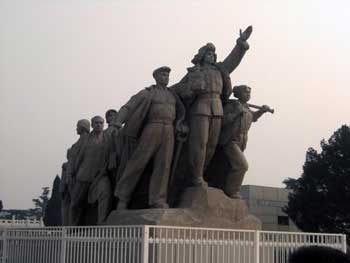 I don’t know for sure, but I doubt Mao was a late sleeper. And these days, if you want to see him, you can’t be either.

I get to Tiananmen before 7:30. The guys who work the metal detectors at the gates aren’t even here yet. The decadent capitalist has gotten out of bed before the communists.

Well, not all of the communists. A few thousand Chinese citizens are already here, queuing and eager to pay their respects to the Chairman. His mausoleum is only open for business before the hours of 8-12, so if you want to say hi, now is the time to do it.

Tiananmen Square is this massive open space, designed to impress and to intimidate, depending on who issued you your passport – several Chinese I meet claim this is the biggest open space in the world. There’s imposing 1950s and ’60s Soviet era architecture to the east and west and a 40 foot tall obelisk, the Memorial to the People’s Heroes to the south, behind which lies Mao’s four or five story tall mausoleum. The real eye-catcher from this vantage point, though, is the gate to the Forbidden City in the north. You know it. You’ve seen it – the one with the two story portrait of Mao on it.

I check my camera and bag at a stand across the square – neither is allowed inside Mao’s mausoleum – and join the surprisingly orderly mass of Mao-philes. This is the neatest line I have encountered in China – normally people just push and shove their way ahead of you, no matter where you are. Soldiers on crowd control duty definitely help with this problem. 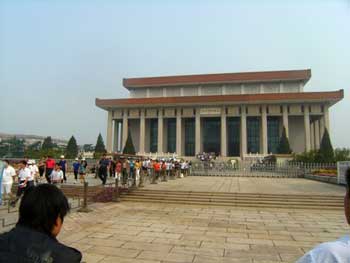 Pale and blond, I stand out everywhere I go in China, but never more so than at this precise moment, I realize. Literally, every other person in this line – all several thousand of them – is Chinese. I feel not just self-conscious, but downright uncomfortable. People are looking at me. Staring at me. Chinese have no compunctions about this, it seems. They’re eyeing me openly. I’m sweating, and the sun is barely even up yet.

Finally, a middle-aged guy in a pink polo shirt sidles up next to me in line. He asks the question that’s on everyone’s mind.

I’m currently living in nearby Tianjin. It’s a city of ten million that most westerners have never heard of. I think about answering “Tianjin” and smiling rakishly, but I know from teaching English to my Chinese classes that my sometimes puckish sense of humor is lost to the language barrier or the Chinese temperament. Or both.

“If you are from the USA, why do you want see Chairman Mao?”

They have a way of being direct here that can be a little disarming. A way of just putting it out there, no matter what is on their mind. For many Chinese, visiting Mao is a quasi-religious experience, a chance to pay homage and prostrate oneself before greatness. His cult of personality still runs strong thirty-five years after his death. Many Chinese are sensitive about outsiders who come to this place with their minds made up that Mao is a megalomaniacal despot, as we’re often taught in the west.

But I thought about this in advance, and I’m ready with a sincere answer. “I’m very interested in China and its leaders. I want to learn.” This is a nice value-neutral statement. 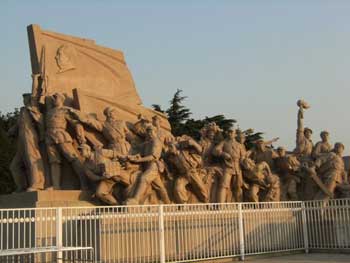 “Ah, yes!” He is pleased with this answer, and he decides in this moment that I am alright. He is going to be my new best friend until we get through this line. He turns to the crowd which is still staring shamelessly at me and offers a translation of our exchange. Smiles and waves all around. And I rejoice, not only because I am no longer quite so isolated in this sea of humanity, but because seeing Mao is only half of the experience – it’s not complete without the interactive and earnest reactions from a real Chinese. I wanted to learn, and I am going to.

According to my new friend – a former teacher, and now a “boss” from Dalian – “Mao was a great man. In the US, the only thing close is your Washington. Mao did not just change China, he changed the world.”

I can’t argue with this, whatever the human cost of Mao’s reign may have been. Without Mao, there is no People’s Republic, and it’s hard to imagine a modern world economy without it. Even though Mao favored a collectivized, socialist paradise, his more economically liberal successors in the ’80s, ’90s, and ’00s benefited immeasurably from the authoritarian political framework that Mao was instrumental in laying down. The Chinese economic miracle is carefully managed by fiat from the top down, and the power to do this rests on the shadow of Mao and his cult of personality.

We talk about all of this, too, more or less, as much as his limited English allows. He wouldn’t say it the way I say it either – his take is much more reverential, of course. Maybe it’s the fact that we’re smack in Tiananmen Square – symbolic in the west for the draconian suppression of the Chinese regime, but in China as the home of Mao, the People’s Congress, and the National Day military review – but this man from Dalian is brimming with visible pride. Literally – his voice quivers, and I swear he’s near tears at one point.

During the whole conversation, he is especially keen to point out China’s wealth. How Americans may earn more, but their cost of living is much higher – so the average Chinese does nearly as well in the end. Of course, some of his questions of me are telling about how big that gap still is… For example, when he’s asking about my life as a teacher in Tianjin, he asks, “How many people do you share a bedroom with?” He’s floored when I answer with “None.” 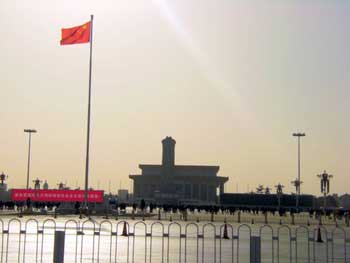 We draw near the door, through several layers of security, and Dalian wants to buy a yellow carnation to leave as an offering to Mao. But he misses the flower stand in the heat of our conversation, and the soldiers won’t let him go back for one. Despite his pleading. Here’s where he comes closest to tears. But the line toward the inner chamber of Mao’s Mausoleum is ever-moving and inexorable. Even though he says he has been here so many times that he can’t count them, this ritual clearly means a lot to him. It is secular religion here, and I have brought a modicum of shame upon him before his Lord. He tells me that having the chance to guide an American through this experience is honor enough.

Everyone’s hushed and reverent as we finally enter the chamber that houses Mao’s crystal casket. Dark marble and high ceilings, lots of red velvet. The man himself has aged well, considering he has been dead for almost four decades. He truly looks like he’s just sleeping peacefully.

Dalian is genuflecting and his hands are pressed together like devout Christian in prayer. This is as intense and as sincere as anyone having a moment in Jerusalem. Except, in the presence of Mao, your feet are not allowed to stop their shuffle.

Like that, our audience with Mao is over, and we’re stewarded back into the heat of the noonday sun. Stalls full of officially licensed Mao memorabilia do a brisk business among the faithful, and I don’t want to be left out. Dalian gives me his name and his number and urges me to call if I ever need anything. He’s really impressed when I purchase a framed red ink lithograph of Mao in profile at the official state-run souvenir stand outside of the mausoleum. For him, this is a sacred icon. For me, it’s pure, unholy kitsch.

My feelings about this reverence for Mao are ambivalent at best. It means a lot to this guy and to many others. It is genuinely spiritual, if not religious. But what is the moral code that that spirituality animates? I’ve been told several times by several Chinese that politics is not something for the people to worry about. That is the first line in the profession of faith of the state religion of China.

I was raised Catholic, so I know that it’s not easy to forget a prayer that you’ve been reciting since before you understood the words… 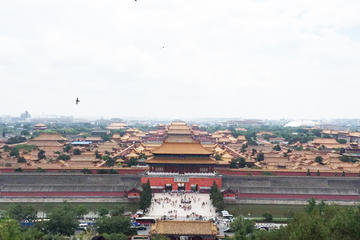 The Mausoleum of Mao Zedong is easily accessible from Qianmen station on line 2 of the Beijing subway. Exit the station toward Tiananmen Square. The Mausoleum is only open between the hours of 8am and 12pm Tuesday through Sunday. Lines are long, so plan to arrive early.

About the author:
Thomas Kenning decided to leave his life as a high school history teacher in order to do crazier things. One of those crazy things was moving to China, even though he spoke no Chinese. He’s written about this and other foolhardy experiences in zines and on his blog at cattywampus.tumblr.com

All photos are by Thomas Kenning.