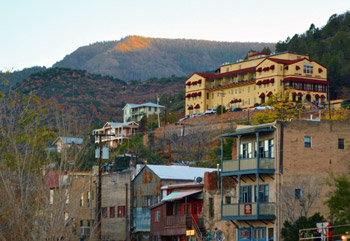 For over one hundred and thirty years thousands of folks have come to Jerome. Many left their mark and some may have never left. Jerome resides in a time warp, where the past and present co-exist. The present struggles to take root while the past never quite lets go. The town lives in an intriguing, fluctuating equilibrium, a delicate balance between past and present that begins its dramatic shift at sunset. As dusk falls, visitors begin to sense that in this former mining town turned lively arts community, there are others roaming about that hail from a different time. With Jerome’s ribald past, it comes as no surprise. And like the spirits that meander about, the town’s spirit also refuses to die. 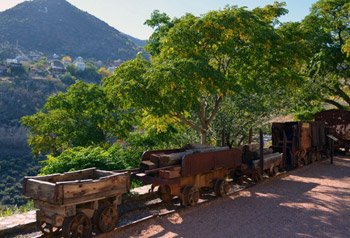 Jerome’s fascinating history began in the 1880s with the arrival of people from many parts of the globe to work the lucrative copper mines that brought its investors billions in profit. In its copper mining heyday, the population of Jerome swelled to over 15,000 and by the 1920s it hailed as the fourth largest territory in the state. Diversions for the miners’ long work hours were many and in the boisterous spirit of the West, lawlessness reigned. A New York newspaper dubbed Jerome “the wickedest city in the West.” The town boasted numerous saloons, Chinese restaurants and laundries and during Jerome’s more decadent times, brothels and bordellos.

The collapse of Wall Street and the Depression marked the end of prosperous times for Jerome. In 1953, the last mine closed driving a stake to the heart of the city. But unlike a vampire, it took more than a stake through the heart to kill this tough western town. 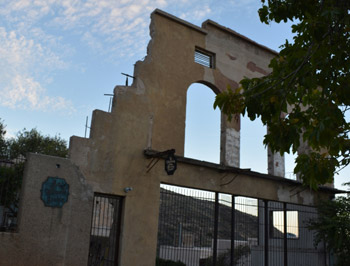 Just as Jerome precariously clings to Cleopatra Hill, the town desperately clung to life. It has survived, despite a long history of tragedy. Fire destroyed large sections of the town on three separate occasions, but Jerome always rebuilt. Devastating landslides and land shifts caused by hundreds of miles of unstable, honeycombed mine shafts under the city itself wrought more damage. An underground blast in 1938 rocked the town’s center, toppling the business district down the mountainside, including the city jail, which slipped 225 feet. Ghostly remains of these structures can still be seen today, some, a hundred yards or more from their original foundations. Untold human tragedies in the form of mining accidents, gunfights, opium overdoses and the flu epidemic killed hundreds. Yet Jerome stubbornly continues to survive. 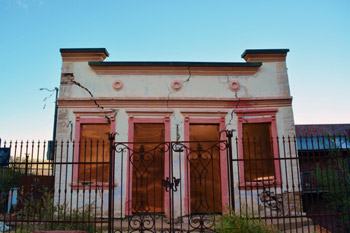 Over time, the population dwindled to a mere fifty residents and became a virtual ghost town. It was the Jerome Historical Society in the 1960s who saved the town from extinction through its preservation efforts and its proclamation that Jerome was America’s newest and largest ghost city. 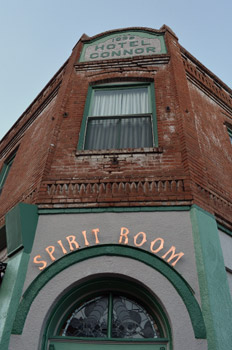 In the 1970s small groups of free- spirited artists arrived, restoring abandoned buildings and transforming parts of this ghost town into an arts community. Today, the thriving town with a population of almost 500 is home to quaint bed and breakfasts, restaurants, saloons, art galleries and unique, whimsical boutiques with colorful names evocative of the town’s history, such as Nellie Bly, Ghost City Inn and The Asylum Restaurant. Most of these businesses are located in buildings that date back to the 1800’s, forging an unforgettable link to the town’s storied past. No trip to Jerome is complete without a visit to the Douglas Mansion, home of the Jerome Historic State Park. The interesting exhibits in this stately home bring to life Jerome’s mining heritage and offer a unique glimpse of its glory years. 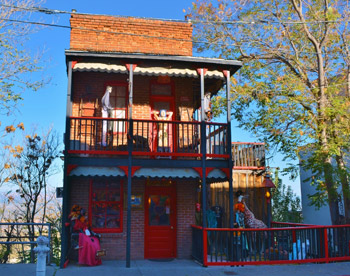 At almost a 5,400 feet elevation, Jerome Winery provides astounding views of the Verde Valley that go on forever. Visitors of today wonder if the town’s residents of the past were as awed by its striking vistas. But it is ultimately the sloped buildings perched precariously on the hillsides, dramatic switchback cobblestone streets, and abandoned ruins that the story of Jerome is told. It doesn’t take much to imagine miners walking the streets, hear the tinkling of a piano or the loud, raucous laughter emerging from the saloon and the occasional sounds of gunshots.

The spirit of this bygone era can be found everywhere, in restaurants such as the Haunted Hamburger to the magnificent historic Jerome Grand Hotel which sits ominously on a hill overlooking the valley and town. Though unsettling to some, the town evokes a feeling you will never forget and like a magnet, draws you back time and again. 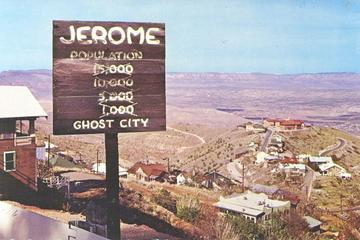 About the author:
Noreen Kompanik is a published freelance travel writer and photographer based in San Diego, California. She is a member of the International Travel Writers and Photographer’s Alliance and shares many of her adventures, stories and photos on www.whatsinyoursuitcase.net and What’s In Your Suitcase? Facebook site.