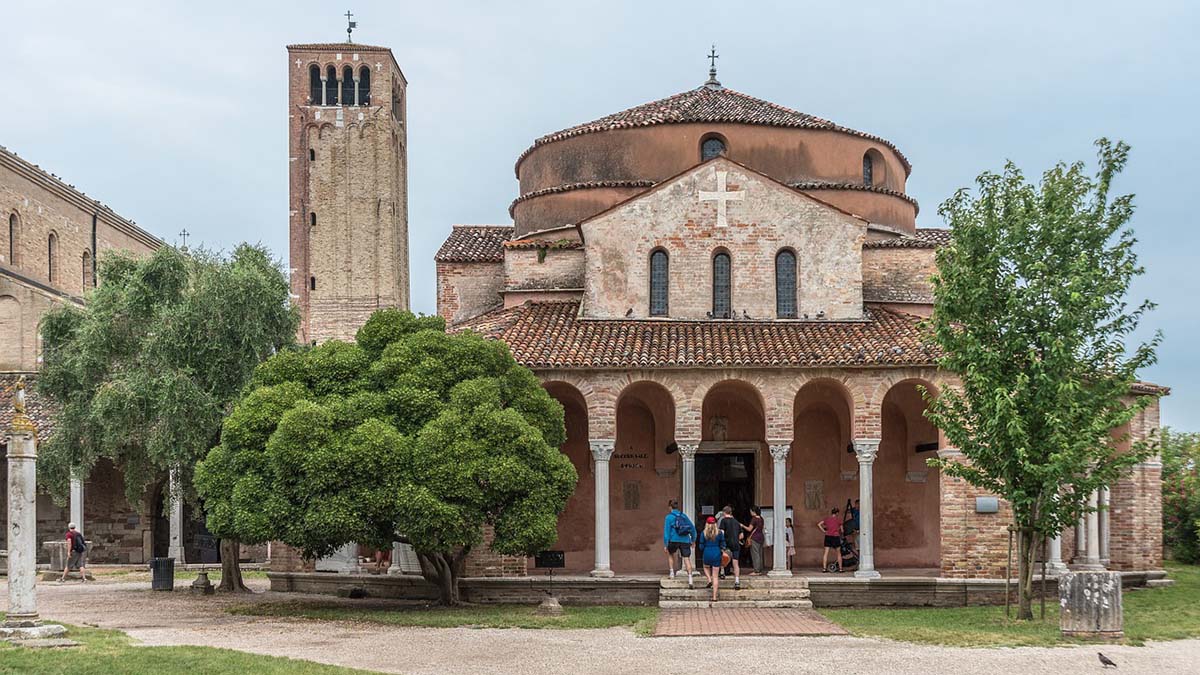 Six miles from Venice, across a vast stretch of water, lies a mysterious relic of a bygone era, the precursor of Venice – Torcello. It was here, on this remote and neglected island, that Venice’s path of destiny began with the creation of an original blueprint of itself, in the form of a glittering city, which was ruthlessly disregarded once the more durable city of dreams began its rise to immortality after the 10th century. We now only have the beauty of the Cathedral’s mosaics to remind us of its former greatness. Yet there remains a special atmosphere on the island, a melancholy grandeur, as if it were waiting for the world to re-awaken the glory of its past. 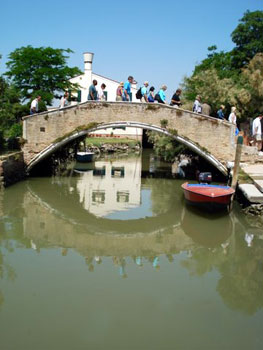 Out here in the open, away from the confines of the city, the unique light of the Veneto takes centre stage and the whole lagoon becomes bathed in pure luminosity. It is a scene of wide horizons where sea and sky merge into a pool of rainbow like reflections. The light continuously shifts and I am lulled into a tranquil, hypnotic state, lost in an other world of translucence.

Torcello lies in the northern reaches of this mesmerising landscape. It is surrounded by a wasteland of salt water marsh, interspersed with sandbanks and tiny islands, defined by narrow channels of water. This is a dormant no mans land with lifeless green weed lying limply across the still water, broken only by tufts of dark bracken sprouting up from the surface. It is an authentic vision of all that Venice once consisted of. Emerging from a mass of green vegetation rises the imposing tower of Torcello’s ancient cathedral, the Santa Maria Assunta. Incongruously placed in the center of this scene of natural desolation it seems symbolic of Man’s tenuous hold over nature. 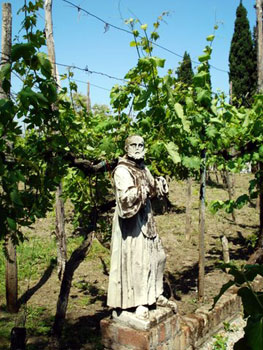 Torcello was the first island to be settled in the lagoon, long before the present day Venice. Its origins are founded on a series of mystical revelations. The people of the lagoon were originally from the Roman city of Altino which came under threat in the 5th century from barbarian invasion. As the Germanic hordes from the north approached Altino many of the residents fled in blind terror, but some remained under the leadership of the Bishop who waited for divine inspiration.

After three days of intense prayer the Bishop of Altino heard a voice like thunder say “Climb ye up to the tower and look at the stars.” The Bishop complied and climbed the tower where he saw the stars in the sky arranged like islands in a lagoon. And so this inhospitable marsh land became their most unlikely destination.

Having established their new island home and naming it Torcello (translated as “Tower and Sky”) there were more miraculous revelations. The priest Mauro received a series of visions including one of Christ, Mother Mary and various saints, each asking for a church to be built in their name. And so began the creation of a splendid city, as churches and buildings began to grow from the marshy islands and mudflats, through the ingenious skill and practicality of this remarkable people. A 6th century writer, Cassiodorous, spoke beautifully of this unique colony – “Here lie your houses built like sea-birds nests, half on the sea and half on the land.” 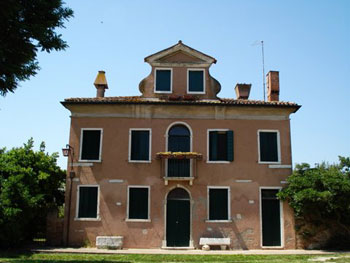 Until the 10th century Torcello was the greatest commercial centre in the lagoon, full of palaces, churches and even a grand canal. Like the lost mythical Camelot, Torcello offers a tantalizing glimpse of a golden utopia, where an egalitarian social hierarchy developed which was uniquely progressive for the time. Cassiodorious wrote “There is no distinction between rich and poor, the same food for all; the houses are all alike and so envy – that vice which rules the world – is absent here.” Here we see the roots of the liberal democracy which became such a feature of the Venetian Republic.

In its prime the population of Torcello was about 20,000 but it fell into decline after it was struck with a series of natural disasters. The harbor was badly damaged by the formation of shoals and sandbars as navigation around the island became impossible. The swamps expanded and nature gradually reclaimed the region. From the 12th century Torcello rapidly deteriorated as malaria spread causing mayhem and the population turned to the more accessible area around the Rialto – the heart of the spectacular new Venice then emerging. 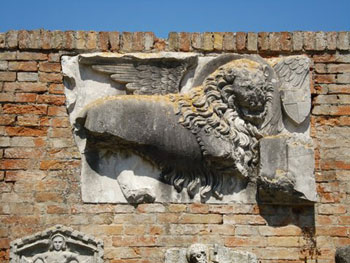 Today Torcello is largely deserted with probably no more than twenty people who are actual permanent residents here. It has a rustic and decaying atmosphere with just a few houses dotted about among the overgrown meadows leaving the island in an other worldly limbo of tranquil silence. Apart from a few farmers with small holdings most of the people who work here are involved with the tourists who come to see the few places of interest remaining on the island: the two churches. a small museum and the restaurant.

I take the only route available on the island, which is the path from the landing boat which leads to the Santa Maria Assunta, the cathedral, which is the main focus of the island. Here the atmosphere assumes a haunting austerity, and despite its decaying appearance, this is a place of great dignity. The cathedral was built in 639 in the Byzantine – Roman style with a rather plain exterior apart from the striking campanile which continues to stubbornly dominate the island.

The ghosts of those early settlers still seemed to inhabit the cathedral, instilling respect and wonder in me. The interior is sparse except for the mosaics which are incredible. They date from the 11th century and reflect the strong Byzantine influence on the art of these early Venetians. But the most affecting mosaics are from the 13th century which cover one of the walls in the apse. Here the Madonna with child is shown with her hands raised in prayer and tears falling from her face, below which is a frieze of the apostles among flowers upon a golden floor. It is perhaps the simplicity of the scene which makes it so moving and only adds to the endearing melancholy of the island. Unlike the mosaics of St Marks, which glitter and sparkle with life, these are simple but exquisite, instilling quiet reflection and peace.

In contrast to the simple beauty of the Madonna is the tremendous Last Judgment mosaic which covers the west wall. Against a gold background a myriad of figures are vividly brought to life in a riot of colour and movement. 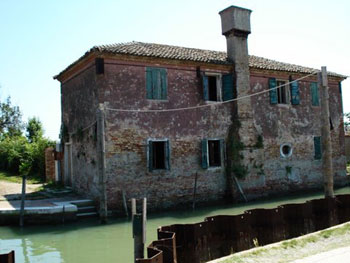 Next to the cathedral is the little church of Santa Fosca. This simple but charming Romanesque construction provides the setting for romantic weddings which are discreetly open to public view. In Venice it is so easy to casually become part of some intimate and private ritual. I remember being here once when a wedding was taking place and a crowd of people were milling around, peeping into the church with hushed curiosity. I had earlier seen the bride arriving in traditional Venetian mode: the young beauty standing motionless in her gondola, a vision in white, drifting gracefully along the canal.

Now I was here to witness the wedding itself as I moved forward into the church. At the altar could be seen the bride and groom with all the guests seated, just as one would expect. But at the rear of the church a musical celebration was in progress where an exquisite tenor voice rang out, accompanied by a woman on violin as their sweet tones soared high into the vaults.

But most of the time the island is quiet with only the small number of tourists to disturb the remarkable solitude. When evening approaches the atmosphere becomes bewitching as the light surrounding Torcello becomes a beguiling mix of iridescent violets and soft greens. To the west is the mainland and a distant range of snow laden misty mountains dominants. To the south lies the expansive lagoon with its sea of boggy vegetation surrounding shapeless mounds of mud. But beyond in the far distance. a long line of palaces.domes and towers rise up from the water like a precarious mirage floating in a twilight pool of purple. It is Venice, but now seen from the perspective of its long distant ancestors. The desolation of Torcello spreads across the lagoon whispering across the water that Venice too must one day come to this. In the words of John Ruskin: “Mother and daughter. you behold them both in their widowhood – Torcello and Venice.” 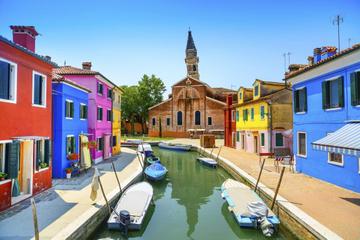 Getting There:
Torcello can be reached from Venice by either public transport or private water taxi.
Public Transport – A regular water bus service (operated by ACTV) is available from the following boarding points:
– No 12 Waterbus from Fondamenta Nuove
– No 14 Waterbus from San Zaccaria near St Marks
Private boat tours of the lagoon are also available.
Torcello is one of three islands normally visited by tourists, along with Murano and Burano, which provides a days outing. However a special three-hour tour is also available. Murano is nearest to Venice and is famous for its glass making, while Burano is a delightful fishing village community.
Cheap flights to Italy

Opening Times:
Cathedral: Daily from 10.00am – 12.30pm and 2.00pm – 6.30pm. There is an admission charge, and a separate charge for entry to the campanile. It is a steep climb but provides magnificent views over the island and lagoon.
Museum of Torcello: Tuesday – Sunday 10am – 12.30pm and 2pm – 6.30pm. Close by the church, it shows the history of Torcello. There is an admission charge.

About the author:
Paul Millward a new freelance writer who enjoys writing about culture, travel and spirituality. He has a particular fascination with Venice and is currently writing a book about the island. Besides writing articles for magazines, he is also keen to explore fiction writing.