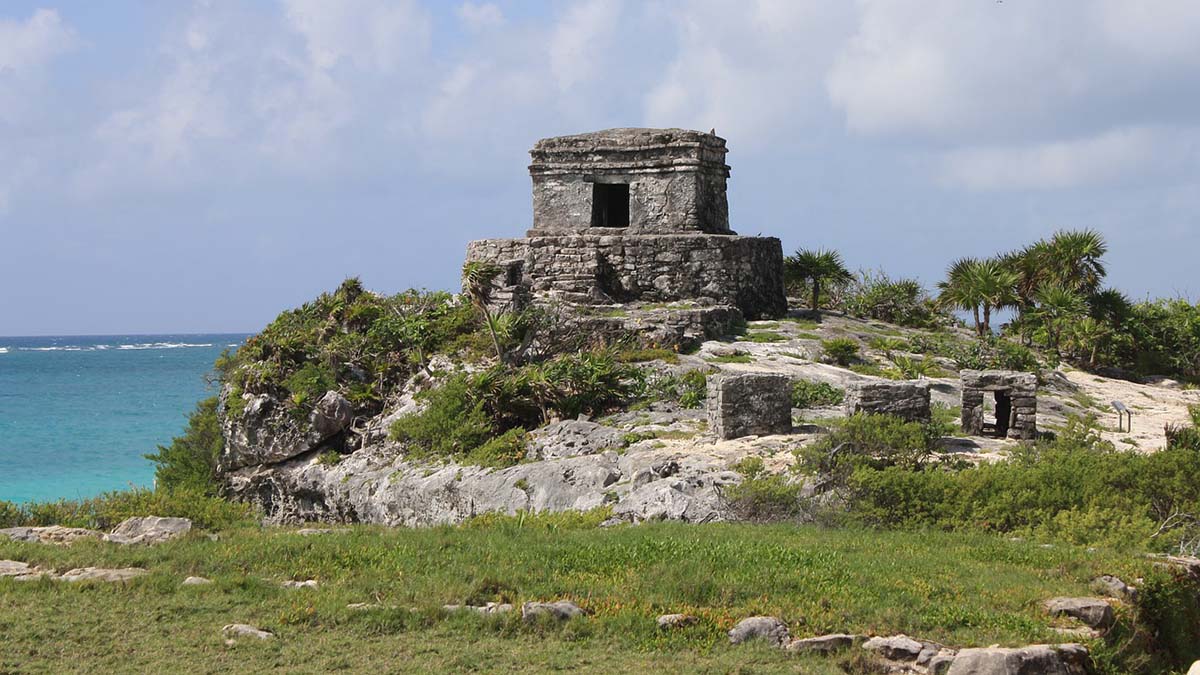 As I stand in the City of Dawn, on the high cliff overlooking the Caribbean Sea, I visualize how the Mayans witnessed the dawning of each new day. Tulum, or “Zama,” Mayan for “to dawn,” is unique in two ways: it is coastal while most other important ruined Mayan cities are located inland in the jungle. Secondly, a massive wall surrounds the city’s perimeter on three sides. The fourth side is open to the sea and drops off a sheer cliff. 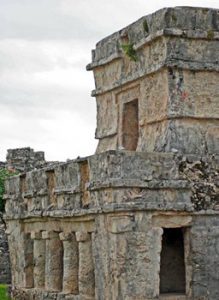 As I start my visit to Tulum, and pass through the low entrance in the wall I’m instantly taken back through a time warp. Once inside the perimeter, I scan across the sixty well preserved buildings within the wall. The Mayans were great stone masons. These buildings are from 500 to 1200 years old and still stand tall. 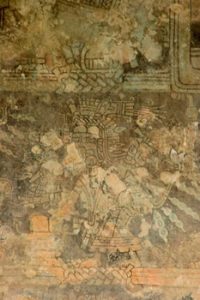 On the building’s interior, frescoes depicting typical Mayan motifs are still visible. Carvings cover the outside of this interesting temple. One image seen on the facades of buildings throughout Tulum, is of the Descending God. This deity was one of the most important gods as the Mayans believed it was this god that accepted their offerings. The temple gets its name from the murals painted on both inside and outside walls of the building. The outside murals have long disappeared, but they are still visible on one of the interior walls.

Without a doubt, the most impressive building here is the castle, or El Castillo. Perched on the highest cliff overlooking the sea, more than seven metres (twenty-four feet) high, this temple-topped pyramid also served as a watchtower and a lighthouse.

Researchers speculate there were two torches on top of it. When cargo-carrying Mayan canoes returned from their sea-faring voyages, the seamen would position their canoes so the two torches lined up one behind the other. Once lined up, the canoes could follow the aligned torches and safely move through the barrier reef, into the small cove and to shore. 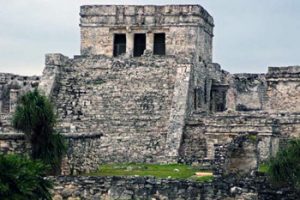 “Zama,” also known as Tulum, Yucatec Mayan for wall or fence, flourished from the 800s to the late 1500s A.D. It would remain inhabited for another seventy years after the Spanish arrived. The city functioned as an important trading post for the Mayans during their last 300 years. Land routes from other Mayan cities terminated here. During this period, the Mayans discovered how to build large seagoing canoes hewn from local hardwoods.

These massive canoes revolutionized trading in this part of the Mayan world. Up to then, the only way Mayans could move their goods was by carrying them on their back. This severely limited how far they could range as the Mayans didn’t acquire horses until after the Spanish arrived. 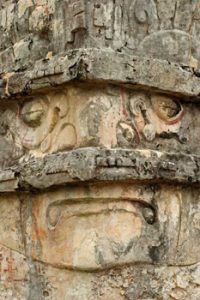 With the advent of canoes, inland goods were carried to Tulum and then moved by cargo canoes to such places as the Gulf of Mexico, all along the coast of the Yucatán peninsula and extending into what is today Honduras, Costa Rica and Panama. This also brought an influx of goods from these areas back to the Mayan world.

Apart from its coastal setting, Tulum is unique because of the wall surrounding it on three sides. The wall averages six meters (twenty feet) thick and three to five meters (ten-sixteen feet) high. The side parallel to the ocean is about 400 meters (1300 feet) long. The two walls perpendicular to the ocean are each about 170 meters (552 feet) long. With the ocean on the fourth side and the massive walls on the other three sides. It’s plain to see how easily Tulum could be defended.

From research, archeologists found Tulum was a center for political, administrative and religious activities. The upper class running these activities lived inside the wall, while the commoners lived outside of the wall.

The Mayans were an amazing people as evidenced by their architecture, their knowledge of astronomy and their calendar, which we still use today. It fills me with awe when I imagine how they were able to move massive stone blocks into place and build such impressive structures. 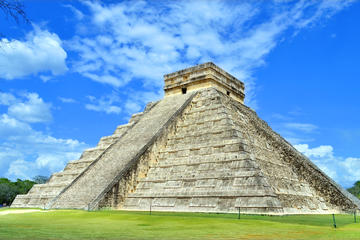 If you are in the Quintana Roo area of Mexico’s Yucatan peninsula (Cancun down to Playa del Carmen), a visit to Tulum is a must-see. If you have a rental car, you can drive to the site and park in the parking lot. Several tour companies up and down the Riviera Maya run daily trips to the ruins. Usually the tour price includes round-trip bus transportation, entrance into the ruins and a guided tour using a bi-lingual guide. There normally is some free time after the guided tour to further explore the ruins on your own. Many tours also include entrance and time to snorkel Xel-Ha, a nearby ecological park.

Admission: 40 pesos. Parking is an additional 30 pesos. Filming using a personal video camera costs an additional 30 pesos. Using a personal digital still camera does not cost extra. The ruins entrance is about a 15 minute walk from the parking lot or you can ride a small shuttle to the ruin entrance and back for about 20 pesos.
Site Hours: 8 a.m. to 5 p.m. every day.
Location: Take Federal Highway 307 south from Cancun for approximately two hours. Follow the signs to Tulum.

About the author:
Ron Kness is a travel writer/photographer with articles and photos published in various house publications, in-flight magazines and other media sources. Ron frequently travels to Mexico and is keenly interested in ancient Mayan culture and architecture.

Photo credits:
First Tulum photo by chambly1236 from Pixabay
All other photos are by Ron Kness.