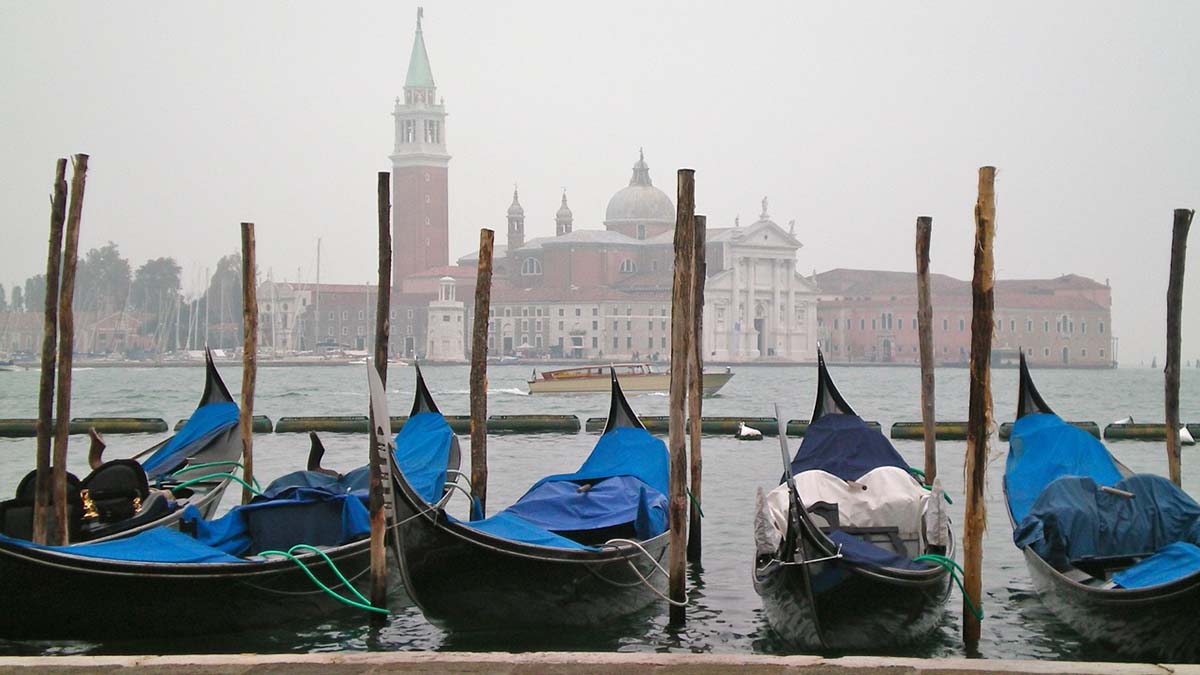 Well, my window
looked out on the Square where Ogni Santi
meets San Trovaso
things have ends and beginnings
-Ezra Pound Cantos

When Ezra Pound arrived in Venice, he took rooms near a walled garden on the Rio San Trovaso, opposite a squero (or gondola building yard). Only a few squeri now remain in Venice, although at the height of her powers some ten thousand gondolas served the city. The gondoliers’ knowledge of the canals is legendary, and legend holds they are born with webbed feet, to help them walk on water.

I crossed the Grand Canal into the area of Venice called the Dorsoduro by the Ponte dell’Accademia. Because of its charm, this wooden bridge remains despite being built as a temporary measure in 1932. It leads to the Accademia, a set of galleries housing the world’s finest collection of Venetian art. As I walked bells chimed the hour from a handful of churches, each sounding a few minutes apart (for churches all over Italy run to their own time). 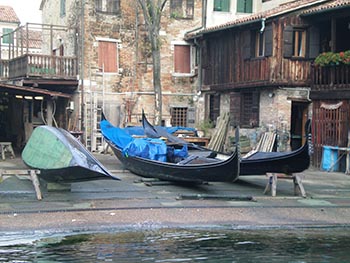 It took but a few minute to leaves the noise and bustle behind, for I’d entered a maze of alleyways and pretty piazzas where cafes spill onto the streets and picturesque residences stand dotted along the quiet canals. Small shops burst with flowers and vegetable seedlings, supplying courtyards and gardens hidden from view of the passerby. At the top of the Ponte dei Pugni – a small bridge spanning the Rio San Barnaba – are two sets of footprints, marking the starting positions for traditional fist fights. (Ultimately, these became so violent they were banned in 1705.) The Fondamenta Gherardini, which runs beside the Rio San Barnaba, is claimed by many to be the prettiest canal in Venice. 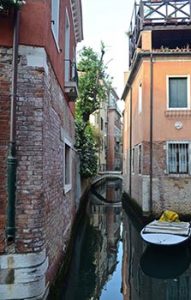 Built in the 17th century, the Squero di San Trovaso is the oldest of the remaining squeri in Venice. It sits beside a small canal, the Rio San Trovaso, allowing easy access for the gondolas. Although closed to the public, as the canal is only a few meters wide all the activity can be easily seen from the far side. On the day I passed some half-dozen gondolas rested upside down in the outside square in various stages of repair. A few were being covered with black lacquer; seven coats are needed to give the boats their famous gloss. Inside the shed another was being built. (Less than a dozen new gondolas are made annually, each taking up to six months to complete.)

Unusual for Venice, the boat-house and adjoining buildings are made of wood, and adorned with geraniums. They are Tyrolean in style, for most squeraroli, (the artisans who work on the gondolas), originally came from this area in the Dolomites, where the best boat-building wood is still to be found. Nine types of wood are used (elm, fir, walnut, oak, mahogany, larch, lime cherry and beech) and in constructing a gondola the squeraroli use some 280 separate pieces, with much of the work still done by hand. 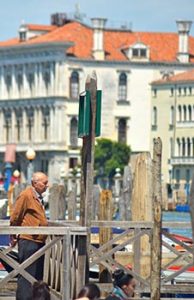 The first record of a gondola is in 1094, when Doge Vito Falier issued a charter allowing Venetian citizens to build their own gondolas. The word is possibly derived from the Latin ‘cuncula’ (shell) or cymbula (little boat). Gondolas appear in paintings of the late 15th and early 16th centuries, in works by Bellini, Carpaccio and Mansueti. Although the design has changed since it first appeared, the manner of steering the gondola is the same: the gondolier faces the bow and propels the boat with a forward stoke, followed by a compensating backward stroke. Originally, some gondolas had two oarsmen; one at the front and one at the stern, and occasionally this method is employed in the backwaters of Venice, as a novice is taught his craft.

The oars, (made of beech), complete with a ribbed blade for greater control, are built by the remeri, (which is derived from the Italian remo, or oar), and are held in place by a rowlock, or focole. The focole’s complicated design allows for up to eight different positions of the oar, depending upon speed and direction the gondolier requires. (Regardless of speed, the gondoliers continue their songs and banter amongst themselves and all they pass.) Unlike a punt, the gondola is never poled, for most of the canals are too deep. 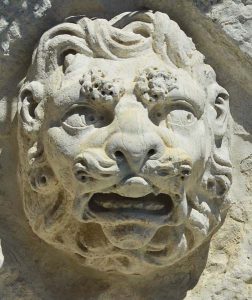 The only metal used in the construction is the risso of the stern and the ferro at the head of the gondola, which counter-balances the gondolier’s weight. It is made from six metal strips, called pettini, representing the six sestieri (or sections) of Venice. Another strip shaped in the form of a double S represents the Grand Canal, with a doge’s cap at its top, and a lunette representing the Rialto Bridge inscribed below. The only other decoration on the gondola is a brass hippocampus (or sea horse), which adorns either side.

Gondolas were originally made watertight by coatings of black pitch. During the 1500’s, owners decorated their gondolas with fancy ironwork, bright carpets and rich colours. An increasing number boasted a felze; a small cabin complete with louvered windows, allowing privacy for passengers, and protection from the elements. (These remained common until the early 20th century, when tourist demand for better views led to their removal.) Sumptuary laws passed in 1562, however, decreed all gondolas to be black to prevent ostentatious displays of wealth.

Around this time the stability of the gondola improved with the development of a wider base, and there are even reports of the boats being used in battle in the Adriatic Sea. When bridges were built over the Venetian canals, they were designed to allow a standing gondolier to pass under their arch. The only other change occurred around the end of the 19th century, when the design became asymmetrical. The left side of the gondola is now 24cm longer than the right, (the gondolier stands on the left, with the oar on the right) to correct the tendency of the gondola to turn to the left which each forward stroke.

From the Squero San Trovaso it is a short walk to the Zattere, a long quayside which looks across the Venetian lagoon to the island of Giudecca. The breeze carries the smell of the sea, the call of gulls fills the air, and once more tourists are everywhere. Outside the Santa Maria della Visitazione there is a bocca di leone, a letterbox where anonymous denunciations were once made to The Great Council.

As I sat sipping a glass of prosecco, I could see all manner of craft plying the waters of Venice, from vegetable barges to garbage trucks and even ambulances. Enormous ocean liners often pass through the lagoon, their wash flooding into the canals. Yet gondolas and their striped-shirted gondoliers remain part of the city’s mythology, having been part of Venetian life for over one thousand years. 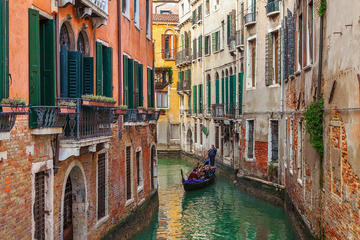 Official website of the City of Venice
A useful guide to museums, galleries, hotels etc.
For those who are interested in a convent stay
Vaporetti (water buses) are the public transport of Venice. Vaporetto no.1 travels the length of the Grand Canal, offering spectacular view of this city.

All photos are by Anne Harrison