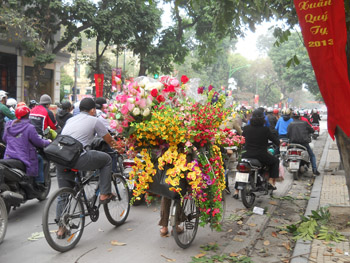 It’s January 26th and I’m holed up in the Old Quarter of Hanoi for a week, falling for the city despite the traffic which is killing me – almost! Some cities have one-way and two-way streets; Hanoi has all-way streets. Endless streams of motorbikes weave between cyclists, pedestrians, street vendors and push carts. Buses, trucks and cars wait for no one. There are three rules for crossing the street; 1) walk slowly, 2) don’t stop, and 3) don’t jump back. Just trust that the motorbikes will find their way around you – and they do.

I’ve made my way across Northern Thailand and Laos by train, bus, minivan and riverboat. Now I’m in the Socialist Republic of Vietnam (pop: 90 million), and it’s time for some Hanoi culture. The Vietnamese Women’s Museum has excellent presentations on marriage, birth, family life, women in history, clothing and textiles. I combine it with a trip to the Hang Long Water Puppet Theatre. In a small seated venue a dozen musicians sing and play traditional instruments while wooden puppets dance in a pool of water, artfully synchronized. 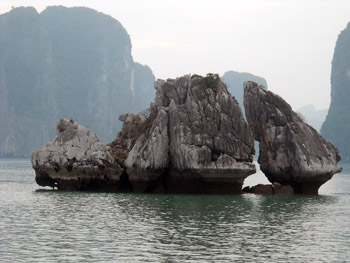 Hanoi is a contrast of old and new with some intriguing contradictions. The National Museum is housed in an old colonial building. The 900 year old Temple of Literature was a center of Confucian learning and thought. The French-era Opera House is beautifully appointed … and located opposite the Hanoi stock exchange in a square that includes a Gucci store and the Hanoi Hilton, that’s the hotel, not the prison which is across town.

The French named the prison “Maison Centrale”, the Vietnamese patriots imprisoned by the French called it “The Hell Hole”, the American POWs sarcastically referred to it as the “Hanoi Hilton”. The official name for the prison now turned museum is “Ho Loa”, and its exhibits are predictably disturbing.

Ho Chi Minh’s mausoleum is set in an extensive complex that includes the Presidential Palace which he declined to live in, and the modest wood house on stilts in which he spent his final years.

One day I take a break from the city and visit Halong Bay. A UNESCO heritage site, it consists of 2,000 limestone islets dotting the bay. The scenery is breath-taking and the caves on some of the islets even more so. 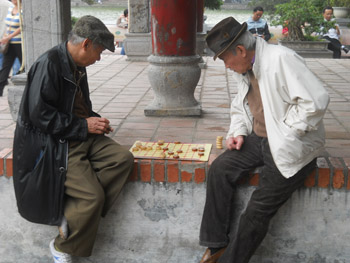 The Reunification Express overnight sleeper train takes 33 hours from Hanoi to Saigon (officially Ho Chi Minh City). But I’m breaking journey at a number of stops on the way including Hue, Da Nang (for Hoi An) and Nha Trang. Vietnamese trains are not for the faint-hearted but along with local buses they give one a good insight into common modes of transportation between cities.

Being in Vietnam has brought back memories of the Sixties. In the U.S. the civil rights struggle raged. Externally, the cold war ran hot, and terminology like “fallout shelter” and “intercontinental ballistic missile” entered my lexicon. Cuba was much in the news, and Vietnam starting to be so. Who can forget those searing images of the first Vietnamese monk to commit suicide by self-immolation in protest at the brutality of Nguyen Dinh Diem’s South Vietnam government. That was in 1963 in Saigon. The monk came from a monastery in Hue, and there is a memorial in the Thien Mu pagoda there. In Nha Trang, the Long Son pagoda is dedicated to the Buddhist monks and nuns who died protesting Diem’s repressive regime. 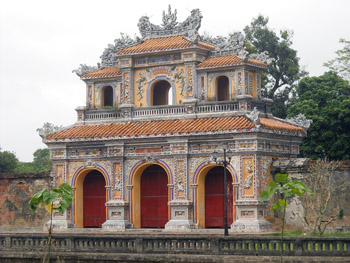 I’ve been curious about the impact of the “Vietnam War” on this country. Vietnamese history cites many wars, not just the one we talk about. There are earlier wars against the Chinese and the Mongols, conflicts between the Nguyen lords of the north and the Champa kingdom of the south, the war of independence against the French (aka First Indochina War), the civil war (aka Second Indochina War or American War) between north and south divided politically by the 1954 Geneva convention and geographically by the 17th parallel, and most recently the 1980’s war against the Khmer Rouge in Cambodia.

Ho Chi Minh is still very much revered as the leader of the independence movement. And the communist party he helped found is still firmly in power. But economic policies have changed dramatically since reunification, and the country is very much open for business. However, the wounds of war take long to heal and I sense a difference in attitudes between northerners and southerners especially among the older generation. Forgive but not forget seems to sum it up best. 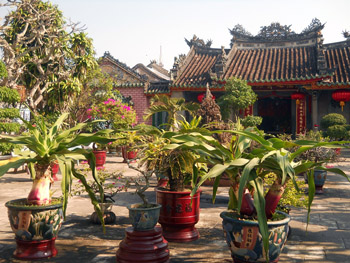 Reminders of the civil war can be found everywhere. In Hanoi, they are present in all the museums. In Hue, capital of the Nguyen Dynasty, a large national flag flies from the Citadel which dominates the Imperial City and Forbidden Purple Palace. The national flag flew here for 28 days when the Viet Cong and North Vietnamese Army captured the Citadel during the 1968 Tet offensive.

It’s Tet (lunar new year) again, and the shops are full of red and gold decorations, lanterns, paper money. As I travel north to south from Hanoi to HCM City (Saigon), the preparations and lead-up ceremonies become more prominent. New clothes, presents for the kids, large dinner parties, incense and devotions, and paper money burned on the street.

Hue is near the old DMZ (demilitarized zone). Ironically, this area was the scene of some of the fiercest fighting in the Sixties. Ninety percent of the old walled city was obliterated and is slowly being restored as a UNESCO World Heritage site. 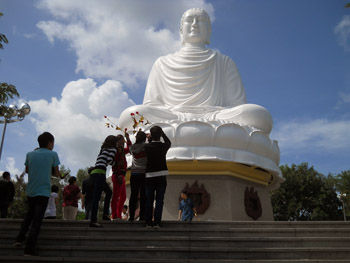 Hoi An is a wonderfully historic city, and also a UNESCO World Heritage site. Night lanterns light up the streets of the old town with its Chinese clan houses, pagodas and covered bridges. I stumble upon a house that belonged to one of the early revolutionaries in the city. His grandson proudly shows me photos of grandpa with General Giap, chief architect of the French defeat at Dien Bien Phu, and of the strategy that led to the North’s victory in the civil war.

Hoi An is where I take a cooking class from a hilarious instructor who manages to find bad puns for every ingredient … “sprinkle, sprinkle little salt” … “open sesame seed”. She prompts us as we cook fried spring rolls, sweet and sour chicken soup, green papaya salad, tuna in banana leaf, and aubergine in a claypot. We slice, dice, chop, stir, fry, drink, eat and laugh our way through the class.

Da Nang (near Hoi An) was home to the second largest American air base in the world. Now it’s a thriving port city. A 6.3 kilometre tunnel running through the Annamite Range has made the journey between Hue and Da Nang much safer and faster. 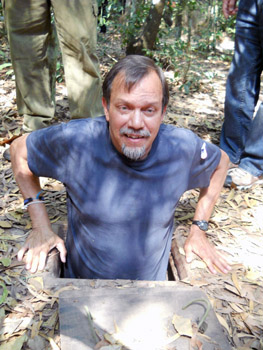 Nha Trang is a sun, sand and sea beach town. It’s predicted to grow exponentially. The Long Son pagoda is full of families praying for good fortune in the new year, and paying their respects to their ancestors. Clouds of incense carry their prayers heavenward past the enormous white Buddha atop the hill overlooking the pagoda. The Tet celebrations culminate in a spectacular fireworks display from barges off the beach. Thousands of people are out to watch, young and old. The beach is vast, and there is much construction in progress. Signs in Russian and English vie for attention.

The train arrives in Saigon at 4 am. If Hanoi is reserved and proud, then Saigon is brash and commercial and in-your-face. But as I wander the streets later that day the city feels deserted. Saigon is normally all hustle-bustle business but the northerners who flock to Saigon for work have gone home for Tet and the city is half empty. Stalls are closed in Ben Thanh market. Businesses in the somewhat grungy Pham Ngu Lao Road have “back in a week” signs up. It’s a welcome respite as Saigon will soon return to its usual traffic mania.

The War Remnants Museum is a potent reminder of the ravages of war. The courtyard has a predictable selection of American tanks, armoured cars, planes. But inside is one of the most powerful exhibits of war photography I have ever seen documenting the effects of napalm, phosphorous bombs, chemical weapons, land mines and artillery shells. An estimated 3 million Vietnamese died in the American War. Two thousand Americans and 300,000 Vietnamese are still listed as missing. During the war, roughly 10% of the country was sprayed with 72 million litres of chemicals, of which 66% was Agent Orange. The dioxides in Agent Orange remain in the soil damaging the health of future generations.

Just northeast of Saigon, the Cu Chi tunnels are fascinating and disturbing. The local villagers initially built family bomb shelters as protection against aerial bombardment and then realized they could make them safer and more effective by linking them into 250 kilometers of tunnels that acted both as a defence and a base for guerrilla operations. I lower myself into a rabbit hole no more than two foot square, place the camouflaged cover over my head, and experience the confining darkness. In another tunnel I crouch-crawl through a section that winds, narrows, descends, and eventually emerges into sunlight 100 metres away. I shudder to think what might have awaited me had I emerged forty-five years ago.

But Vietnam certainly isn’t all looking through the past darkly. If anything it’s the opposite. Today’s Vietnam has an optimism and vibrancy about it. The West may be industrial … the Vietnamese are industrious. And I am truly in awe of the beauty of this country and the resilience of its people. 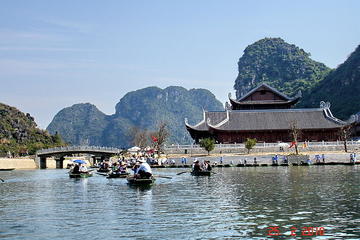 My trip through Vietnam was a combination of solo travel and travel with “Geckos”, a small group, eco-tour company. I left myself lots of solo time in Hanoi and Hue before joining the tour in Hue. I left the tour in Saigon and spent some solo travel time there before crossing Cambodia to Bangkok in Thailand. There are plenty of safe, comfortable and clean 2 and 3 star hotels in Vietnam costing under $50. I recommend traveling by local bus and train if you have the time. 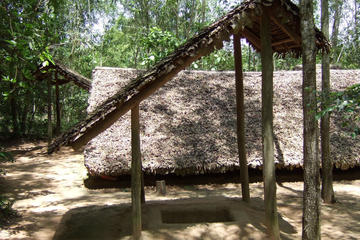 About the author:
Barry Truter is a musician and writer based in Vancouver, Canada. He has been a traveller all his life, having lived in India, Hong Kong, Fiji, USA, Pakistan, England and Canada, as well as a spell at sea working on a freighter. His most recent articles have appeared in Vancouver’s The Province newspaper and in the Canadian Folk Music Journal. As a musician, he performs solo and with his band, Fraser Union (www.fraserunion.com).

All photographs by Barry Truter, except #7 by a bystander:
Hanoi traffic is not for the timid
One of two thousand islets scattered around Halong Bay
Time out for a quiet board game by Hoan Kiem Lake in Hanoi
A gate in the walled Imperial City of Hue
The courtyard of a Chinese clan house in Hoi An
Statue of the Buddha overlooking the Long Son pagoda in Nha Trang
The author emerging from a hideout in the Cu Chi district