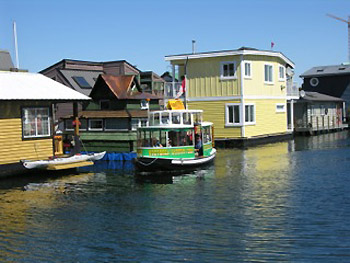 “Busiest float plane airport in North America,” Captain Bob proclaimed as we watched a Harbour Air float plane whine its way to a graceful takeoff and bend its nose to the sky.

And busy is an apt word to describe Victoria, B.C.’s inner harbour, especially as viewed from the belly of a many-windowed ferry operated by Victoria Harbour Ferry.

Victoria Harbour Ferry operates two separate tours plus water taxi services, entitled the H2O taxi, for Victoria’s inner harbour and the long sea-finger that is the Gorge. Their fleet of 14 little ferries shuttle between 18 designated stops providing for both convenience and the uniqueness of a water born perspective.

While awaiting the Harbour Tour ferry at Fisherman’s Wharf we mingled with a small throng of visitors strolling the walkways amid the small float home village, indulging in dining and refreshments from the numerous food and refreshment stands, setting off on whale watching tours and congregating for the ongoing seal show. Led by the famous one eyed seal, who has occupied the favoured food source for many a year, a flitting little pod of harbour seals poked their noses and pleading eyes into view for offerings of treats afforded by the huddle of tourists jockeying for a view. Their reward attained they dove into the watery darkness only to return for seconds (or thirds and on and on).

It proved a warm seaside day and the Sun painted the scene with vibrant colour and activity; excited chatter competing with the echoing wail of gulls.

Our ferry eased its way to its birth, effortlessly manoeuvring within narrow confines, and disgorged part of its animated host. We, the replacements, stepped down into the ferry’s belly and huddled together along the wooden benches to await the 45 minute harbour tour excursion. Well windowed there were no real bad seats to be had. Captain Bob launched into narration as soon as we began pulling away.

The harbour exploded with life as we emerged from the shelter of the float home village and marina. A visage one foot in the present, one in the past and an eye on the future. 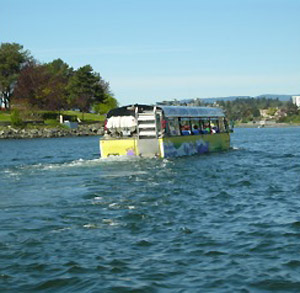 To our right plodded the Hippo bus, an amphibious bus tour wallowing methodically on the water leg of its 90 minute city tour. The excursions are provided by three such vehicles appropriately named Harry, Happy and Henrietta; operated by Victoria Hippo Tours.

Still to our right rumbled the MV Coho of the Black Ball Line loading passengers and vehicles for the journey to Port Angeles on Washington State’s Olympic Peninsula. She has been plying the route since inception in 1959 compiling an impressive record for safety and reliability. Nearby rested the high speed passenger-only ferry, the Victoria Clipper, which has been flying (taking less than 3 hours) the route to Seattle since 1986.

Ahead, the famed Empress Hotel hogged the horizon as we bobbed our way to the tour’s starting point along the regal promenade filled with artists, performers and tourists. The lilt of music in our ears we paid for our tickets and were soon back on board and set for the excursion in full. Captain Bob brought the trip to life with his commentary. Built between 1904 and 1908 on land reclaimed from the bay, he noted the Empress Hotel has been designated a National Historic Site.

He went on to point out the location of the original Fort Victoria dating from 1843, the site of old tunnels boring beneath the streets, the story behind the major buildings being constructed from ballast brought from China, the full tale of the construction of the Empress Hotel and Victoria’s fame as the most haunted place in Canada. In between he bantered easily with passengers.

The harbour was alive long before the coming of the Europeans; who nosed around the harbour in 1790 under the Spanish flag aboard the Princesa Real. Archeological evidence suggests First Nations habitation for at least 4000 years. Gold rush fever swamped the harbour, and in fact the colony, when the Fraser Canyon Gold Rush in 1858 was shortly thereafter followed by the Caribou Rush between 1861 and 1862. The British Navy moved in next door in Esquimalt, the new provincial parliament buildings (off to our immediate right) arose in 1888 and in 1919 came the first float plane.

William Boeing and Eddie Hubbard beached their plane in the harbour as part of the new U.S. International Air Mail Service connecting Seattle, Victoria and Vancouver. 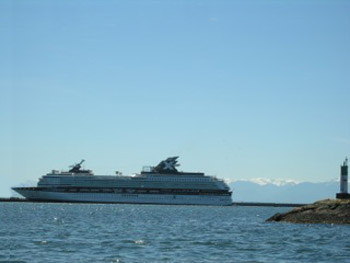 As a float plane began its shuttle to take-off Captain Bob explained how the Inner Harbour is a designated airport with its own control tower and seemingly endless stream of float planes flitting in and out. It is hard to tire of watching these elegant planes slowly lift off and rise gracefully against the horizon or skim to elegant landings.

The harbour was filled with boats and float planes, a 12 million dollar yacht, its windows darkened, sat aloofly, one of the two period sailing vessels owned and operated by S.A.L.T.S. (Sailing and Life Training Society) rested at its birth, a two man outrigger canoe swept by, a speeding whale tour craft zoomed out to sea, and crafts of all sorts bobbed at their moorings. Colour, sound and movement assailed our senses from a unique water level perspective.

Arching seaward near the Johnson Street Bridge we cruised close to the rocky shoreline, watching and watched by strollers and hikers enjoying the seaside trail. Before long we came in sight of the West Bay Marine Village, its piers crowded with fashionable houseboats and supporting craft. A scheduled stop on the trip we wove our way amid the piers, our captain being hailed and hailing with warm familiarity. On departure he spoke of the prairie folk who come to the coast in their motor homes to wait out the winter in warmer climes at the nearby trailer park, getting a rise from the four Saskatchewanites along for the ride.

Rounding the bend and back into the harbour we passed numerous bird houses affixed to old pilings and learned of a project to support the threatened Purple Martin.

We emerged into the harbour to the vista of the widening harbour mouth and the looming snow clad crowns of the Coast Mountains of the Olympic Peninsula. Silhouetted on the horizon loomed the still form a naval vessel. Of greater clarity and size sat a cruise ship moored at Ogden Point, a small city towering over the pier. In 2001 the Norwegian Sky became the first cruise ship make a cruise visit to Victoria and became the first of many.

Swinging round for home the inner harbour came into broad view just as a departing float plane began its noisy race to ascension; rising steeply as it passed, appropriately enough, between us and the glassed control tower. 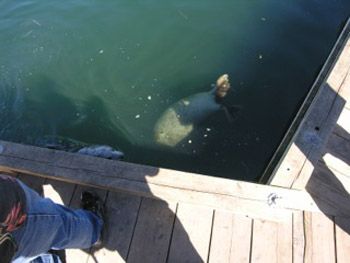 As we puttered near the shoreline we again spotted walkers enjoying views and vistas from the shoreline, the odd one waving.

Fisherman’s Wharf rolled into view and we slid by the crowded marina before slipping into the houseboat village to step ashore, journey complete.

The separate tour up the Gorge is a sixty minute excursion revealing a totally different aspect of Victoria. Where once Victorian age locals paddled and picnicked, conscious of the tidal temperament of the seemingly tamed water course, the tour affords views of historic homes, parks and walking trails. An idyllic atmosphere hangs over the waters and tree shaded banks imbue it with timeless serenity.

Busy is an apt description of Victoria’s waterways yet they are busy in an ever changing way ensuring no two trips are ever the same. Sky, sea and land dance together with a slow grace even as time alters the players on this canvas.

We passed the still feeding seals and they took no notice of us. 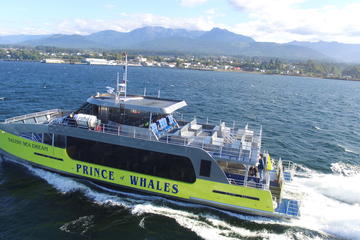 ♦ Victoria Harbour Ferry  – provides all the information you will need about fares, schedules and offerings.
♦ Tourism Victoria
♦ Read about S.A.L.T.S. Sailing and Life Training Society 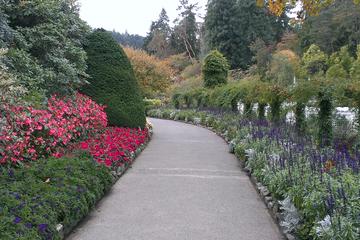