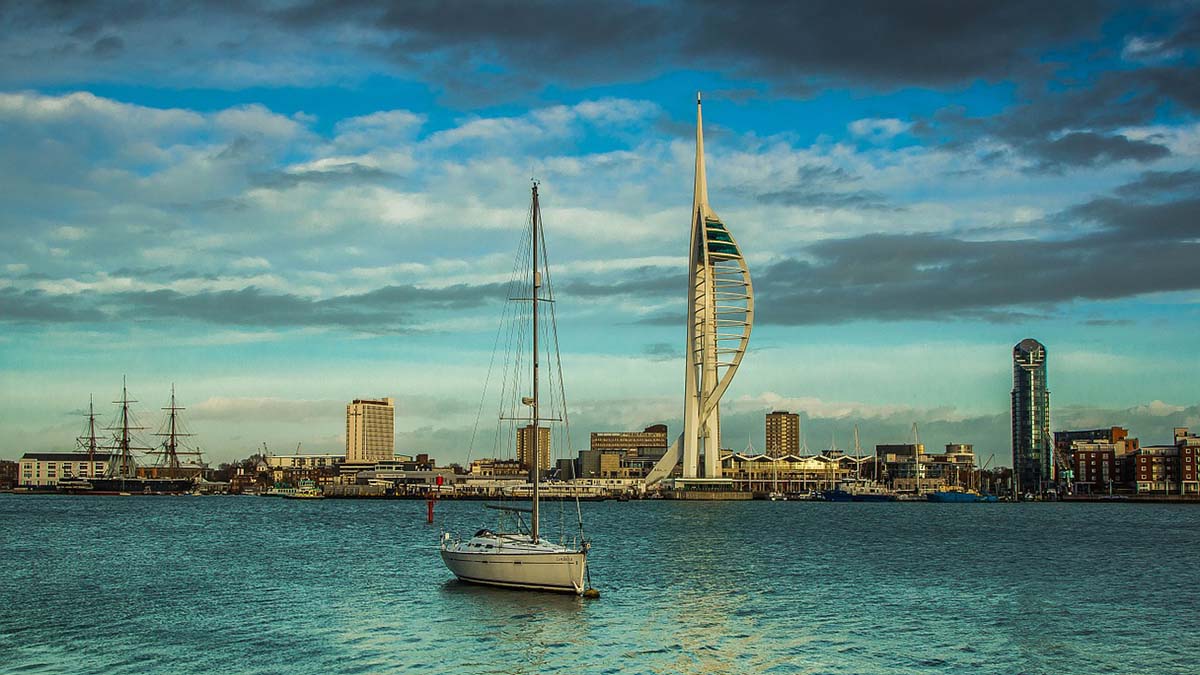 The city of Portsmouth, on the south coast of England, is one that has a great coastline and harbor. As such, Portsmouth has plenty of boats! A variety of boats of various shapes and sizes, both modern and more historic, can be found at its harbor. As the city includes a Royal Navy naval base, which is one of the largest in Europe, it has a fascinating naval heritage.

After exiting the train station, the first thing that cannot escape your attention is the HMS Warrior which dominates the harbor. The HMS Warrior is a 19th century battleship that was added to the Royal Navy’s fleets in 1860. This was Britain’s first iron-hulled, armored warship that was the largest and most advanced battleship of its time. Today it’s both a museum and monument of the city of Portsmouth.

To the right of the Portsmouth and Southsea station exit is the Hard Interchange. This is essentially a bus station and coach drop-off point. However, many of Portsmouth’s highlights are along the waterfront and well within walking distance.

A tourist information office is located just beyond the Hard Interchange, besides the Historic Dockyard’s entrance. It is here that the Millennium Promenade, or trail, begins. The Millennium Promenade is a three kilometer promenade which links Portsmouth’s historic waterfront. It stretches from the entrance of the Historic Dockyard to the Spur Redoubt at Clarence Pier. This is an ideal point to begin a stroll along the coast which is highlighted with a chain motif which runs along the path of the promenade. 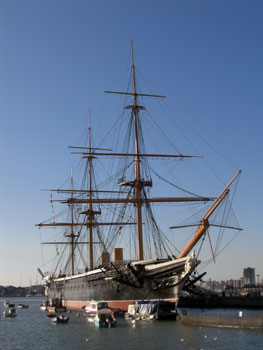 However, first I just had to drop in at the Historic Dockyard. It is here that a variety of naval museums are located such as the Royal Naval Museum and Mary Rose Museum. As mentioned the Historic Dockyard includes the HMS Warrior, which can also be considered a museum. Whilst you’ll need tickets for the ships, you can still enter the dockyard without tickets.

Its other famous ship is better hidden at the back of the Historic Dockyard. The HMS Victory is the other ship displayed at the Historic Dockyard which, at the time of writing, is undergoing renovations. This is an older warship than the HMS Warrior that was the flagship of Admiral Lord Nelson during the Napoleonic Wars. It was aboard this warship that Lord Nelson and his officers planned the Royal Navy’s victory at the Battle of Trafalgar.

Upon reaching the HMS Victory, you may notice more modern warships at the Royal Navy base. A 20th century camouflaged warship is also displayed next to the HMS Victory. This ship includes dazzled camouflage, and was introduced during World War One to disguise Royal Navy ships.

Gunwharf and the Spinnaker Tower 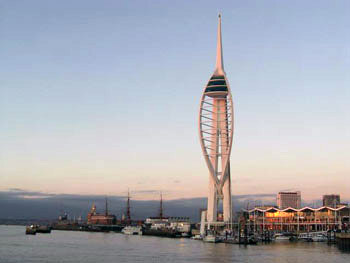 After exiting the Historic Dockyard, the Millennium Promenade will take you to Gunwharf Quay right next to the train station. The Gunwharf shopping precinct is a more recent addition to Portsmouth that opened in 2001. It includes a bowlplex, cinema, Grosvenor Casino and a Holiday Inn Express hotel at the Gunwharf Quays Plaza which is ideal for any longer stay in Portsmouth.

Undoubtedly, the highlight of Gunwharf is the Spinnaker Tower which dominates the skyline of the Millennium Promenade. This has become a landmark tower of Portsmouth, and rises over 500 feet. The tower includes three platforms, the highest is the crow’s nest which has a wire-mesh roof. The Spinnaker Tower also includes the Café in the Clouds located on the second platform.

Beside the tower there is a small marina along the waterfront of Gunwharf. This includes a waterbus terminal from which you can take boat tours of Portsmouth’s harbor. The other waterbus terminal is located at the Historic Dockyard. These provide tours of the harbor with full commentary, and require no advance booking. 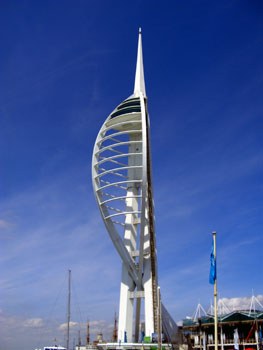 At Portsmouth Old Town there is the Camber which is a small harbor that dates back centuries. It was here that spices used to arrive in Portsmouth, as well as coal which remained a notable import up into the 20th century. Today smaller fishing vessels dominate the Camber.

There are also some great pubs scattered around the Camber. Portsmouth Old Town has up to nine pubs, which are ideal for a pint. Among them include The Bridge Tavern on the Camber, The Wellington and the Still and West.

The Round Tower is one of the old coastal fortifications that remain in Portsmouth Old Town. The roof of the tower is open to the public, and provides great views of the harbor. At the seaward end of the High Street in Portsmouth Old Town there is also the Square Tower, and between the two towers lies a stretch of seawall and cobbled shingle beach.

Portsmouth Old Town ends at the Spur Redoubt. Here there is Nelson’s Passage which links the Renaissance Trail with Southsea Common. Alternatively, you can continue along the trail which links to Clarence Esplanade. 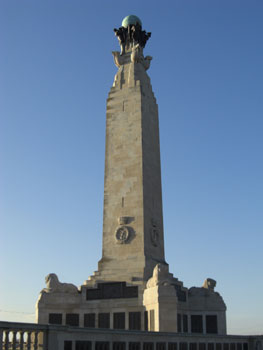 Southsea Seafront begins at Clarence Esplanade, and the Victorian seafront continues for about four miles. At the esplanade I reached Clarence Pier and its fair that includes the small Skyward roller coaster, dodgems as well as miniature golf. However, the fair remains closed until March. Although the adjacent arcades are open, and they also include the Coffee Cup café and Wimpy Bar. The Premier Inn and Holiday Inn are two nearby hotels next to Clarence Pier which could be suitable accommodation for visitors.

On the right side of the Clarence Esplanade a stretch of open pebbled beach emerges from Clarence Pier up to Blue Reef Aquarium. To the left the esplanade is dominated by the grassy Southsea Common. Located halfway up the common is a large world war naval memorial with the dates of both world wars included on it. A smaller Crimean War monument also lies at the Blue Reef Aquarium’s entrance.

An ideal restaurant in Southsea is the Mozzarella Joes beach bar and grill. Located between the aquarium and Clarence Pier, this is the only restaurant on Southsea Beach. Mozzarella Joes cooks some famous grills such as sirloin steaks, rump steaks and BBQ ribs. Alternatively, gourmet burgers, stonebaked pizzas and seaside classics are also on the menu at this beachside restaurant. 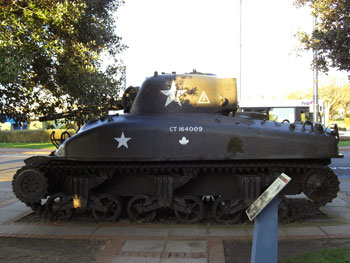 One of the highlights of the Southsea Seafront is perhaps the D-Day Museum at Castle Field. This is a museum that documents the 1944 D-Day landings in France. It includes the Operation Overlord embroidery which is an 83 meters long D-Day textile. Outside the museum an American Sherman tank and a British Churchill tank are also displayed.

Behind the D–Day Museum you will also find Southsea Castle. This old coastal castle was constructed to guard the entrance to the Solent. It’s also open to visitors, with various old military armaments and artifacts displayed around the castle’s grounds.

Beyond Southsea Castle the common ends, but Southsea’s seafront does not. South Parade Pier is located on the largest stretch of Southsea Beach. Opposite the beach of Southsea Esplanade there is the Canoe Lake and Southsea Model Village. 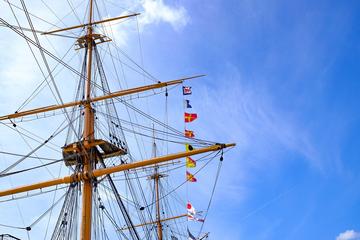 About the author:
Matthew Adams is a freelancer that has produced a variety of articles for various publications and websites such as Swing Golf Magazine,TripAdvisor, Captured Snapshot, Coed Magazine the Washington Post and Vagabundo Travel. Matthew also has his own golf blog at: amateurgolfer.blogspot.co.uk.