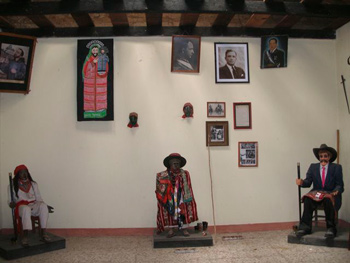 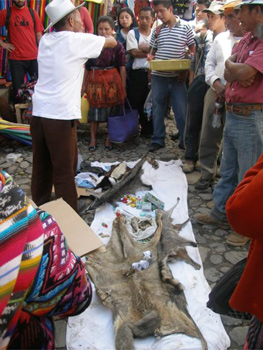 Stepping out of the bus at Chichicastenango on market day is like being hit right between the eyes. You are met by a loud seemingly chaotic atmosphere filled with unintelligible languages, the smell of burning incense and traditional herbs and a sea of bright colored clothing. The maze of temporary stalls through which you must pass in order to reach the tourist sites adds to your sensory overload.

The indigenous market is so crowded that your day is guaranteed not be fast paced. You will also have time to see that there is some organization to this seeming chaos. Designated sections of the market feature pottery, wood carvings, colorful Mayan textiles, vegetables, poultry, livestock or whatever else you are in the market for. 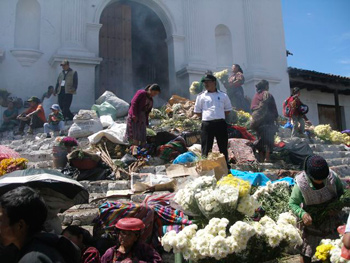 Take your time looking around for the best deal because prices are cheaper further away from the center of town and you are heading toward the centre of town.

Arriving in the plaza in the center of town you find the 475 year old Church of Saint Thomas with its whitewashed facade. This is not your typical Roman Catholic Church as the “traditional” Maya seem to have worked out some sort of arrangement with the local clergy. Climbing the 18 steps up to the house of worship, you might accidently trip over a shaman burning incense or candles and possibly even sacrificing a chicken to his gods. You might also be surprised to learn that this present day church was build on the site of a pre-Hispanic Mayan temple. History also records that the Mayan Bible known as the Popul Vuh was first discovered at this site by the Spanish. 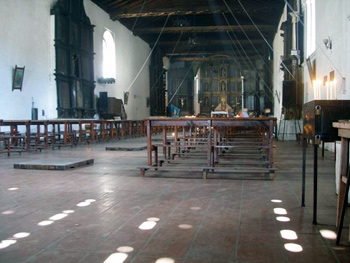 The dimly lit interior of the church is saturated with smoke from past Mayan offerings. Take care where you step because you might accidentally walk over the remnants of an offering of flowers, corn or even alcohol set on or near one of ten low concrete platforms running along the length of the center aisle. Multi-colored gobs of wax suggest that the candles were set in pre-arranged patterns on these once-smooth surfaced altars. Roughly finished planks cover the apse behind the “Catholic” altar. Three saintly statues are set on recesses in each of the side walls. After observing the mix of two religions I could almost imagine these statues saying to themselves of their Mayan co-tenants “If you can’t beat them, join them.” 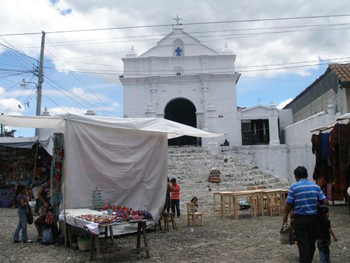 You can also cross the plaza and visit the Calvary Chapel which is a scaled-down version of the Church of Saint Thomas. Inside there are only three low concrete slabs on which to place offerings. The apse features an intricately carved wooden altar and the side walls feature hand-painted murals.

Exiting the Calvary Chapel, follow the winding road down the hill to the Museum of Ceremonial Masks. This museum houses a display of carved wooden masks and costumes that were once used in traditional dances all over the area. One room features a colorful mask and costume used in the bull dance. Other Mayan masks were used in the dances of the snake, deer, monkey and jaguar. Your keen eye can distinguish the Mayan masks that are over 200 years old because these are not painted.

Masks representing the Spanish have real hair for beards, mustaches and eyebrows. Statues of Mary and Joseph are set alongside a manger holding a statue of the baby Jesus. How can you be sure that this is the baby Jesus? Because he has a beard as well.

Shaman mannequins are also prominently displayed; these outline how this occupation has evolved over time. The mannequin representing the Mayan shaman was dressed in a gray shirt and pants held up by a red belt. His long black hair was covered by a red scarf. The Latino shaman wears a red, white and black shirt and a Spanish-style straw hat. A red scarf was draped on his right shoulder. The modern shaman, holding a cigarette in his hand, was dressed in a suit and tie. [TOP PHOTO] 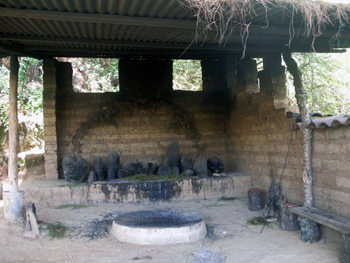 The owner of the museum proudly pointed out that both he and his forbearers were all shamans. After touring the museum, the owner invited us to visit the Mayan altar set on the hillside behind the museum. After a short, steep climb we arrived at a large stone approximately 6 by 12 square feet and 18 inches high set under an awning. Fourteen small stones and two crosses placed there by the Spanish were the only decorative features. At the center of the altar is a shallow depression approximately 4.5 feet in diameter that is still used for burnt offerings by Mayan Shamans. Some straw fibers were still visible on the altar surface, likely from a recent offering.

After descending the hill, you may wish to take a break and relax over a cold drink. Return to town and visit the Mayan Inn. Order your drink and find a shady seat in the courtyard near the parrots. You will need to recharge your batteries because you must pass through the market again. By mid-afternoon, the crowd will have thinned out after the money has been exchanged and the supply of goods has been depleted. You also find that many of the stalls are being disassembled until the next market day. You can proceed back to your bus at a quicker pace unless you become distracted by another possible souvenir.

♦ Day trips to Chichicastenango can be arranged through the local travel agents in Antigua. The bus will drop you off and pick you up at the Hotel Santo Tomas in Chichicastenango.
♦ Two places in Antigua where you may wish to consider booking your tours are: Planeta Maya Travel Agency 4 Calle Poniete #20 (interior) and Guatemala Land Royal Tours and Travel at 5 Calle Poniente #4 (ask for Hektor Salazar). Most tour companies prefer that you pay in cash. Some do accept credit cards but you will be charged an additional fee. Inquire about this in advance.
♦ The Hotel Santo Tomas is located at 7a Avenida 5-32, two blocks east of the plaza.
♦ The Church of Saint Thomas is on the east side of the main plaza.
♦ Calvary Chapel on the west side of the main plaza.
♦ The Museum of Ceremonial Masks is located near the end of 9a Calle. Admission was 25 Quetzals.
♦ The Mayan Inn is located at 3a Avenida 8 Calle 1-91 Diagonal Santo Tomas. 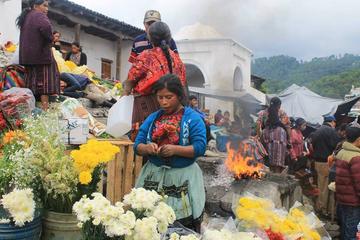 About the Author:
Troy Herrick, a freelance travel writer, has traveled extensively in North America, the Caribbean, Europe and parts of South America. His articles have appeared in Live Life Travel, International Living, Offbeat Travel and Travel Thru History Magazines.

Photo Credits:
All photos are by Diane Gagnon, a freelance photographer who has traveled extensively in North America, the Caribbean, Europe and parts of South America. Her photographs have accompanied Troy Herrick’s articles in Live Life Travel, Offbeat Travel and Travels Thru History Magazines.