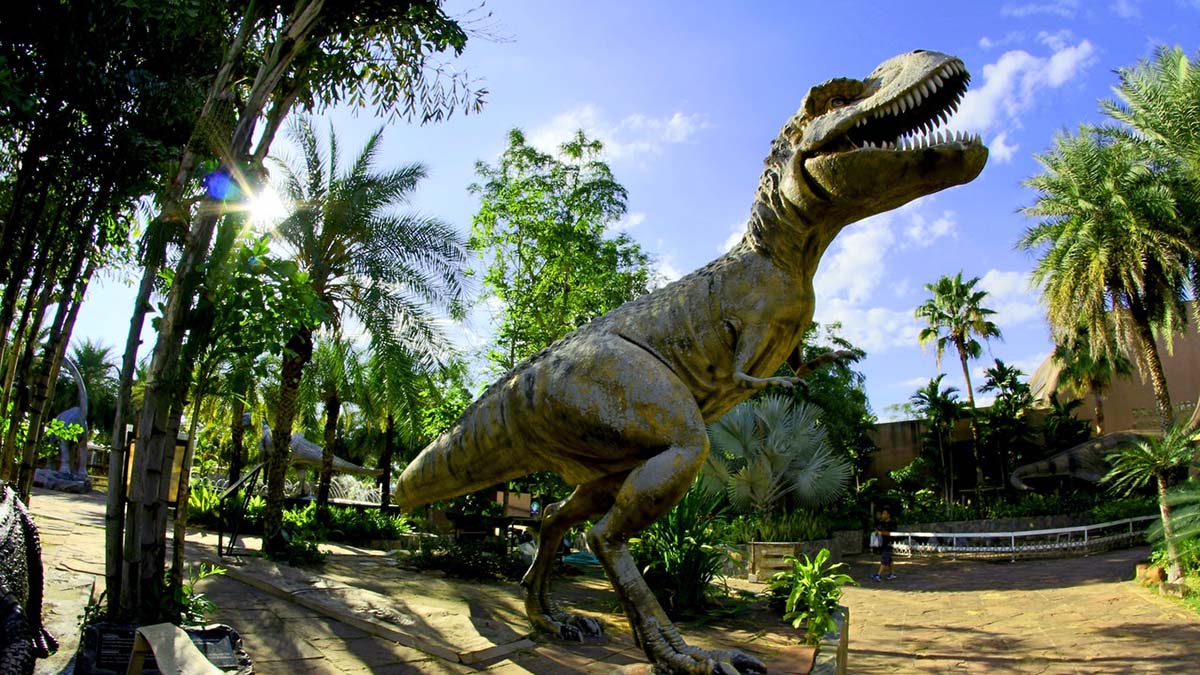 These life-size, intricately detailed dinosaur replicas at the Naples Botanical Garden in Naples Florida move and growl realistically, and include the little-known, fearsome Utahraptor. Paleontologists have concluded that the 25-foot-long creature lived around 125 million years ago and weighed over a ton. With running speeds of more than 20-miles-mph, it was able to jump 15-feet high, with frightening 9-inch claws that likely debilitated its prey.

It was unearthed in Utah in 1991–being appropriately named Utahraptor. Little was known about this dinosaur until 2001. When an excavation uncovered six-individual specimens so large they prompted Utah’s state paleontologist to comment, “This thing is built like Arnold Schwarzenegger.”

Peering back millions of years, you can touch 10-life-size animated dinosaur models from the Jurassic and Cretaceous periods of the Mesozoic era in the Brazilian and Florida Gardens, two of the many in the 170-acre botanical garden.

Strolling through the Florida Garden, you’ll first come across Citipati, classified as oviraptors in the dinosaur family. Oviraptors mean “egg thief”. Although the historical record can’t verify that this dinosaur stole and ate other creature’s eggs, it does confirm that Citipati had feathers and sat on their own eggs similar to birds today. 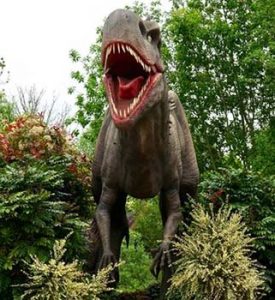 Continuing on the path, Diabloceratops greets you with its frightening appearance. It would lead you to believe it used the horns for devouring prey, but instead, the dinosaur ate vegetation. Scientists know this because they have opened the dinosaur’s stomach to reveal vegetation consumption.

Peeking through the tall shrubs, Protohadros, a type of hadrosaur called a duck-billed dinosaur, greets you on two legs, beaked, and with no horns or spikes to protect themselves from predators. Hunting a larger animal is very dangerous. Their only defense was to grow faster than their predators. 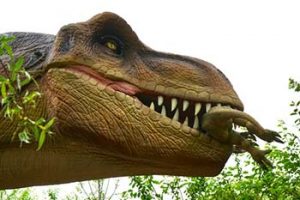 And finally, in the Florida garden, Tyrannosaurus Rex greets you. Probably the most recognizable dinosaur today, it was among the last non-avian dinosaurs to roam the Earth before the Cretaceous-Paleogene extinction event that marked the end of the Mesozoic Era–the dinosaur’s extinction–65 million years ago. In Tyrannosaurus Rex time, the forest was probably much like our North American forest today.

Three more dinosaurs are displayed in the Brazilian Garden. Amargasaurus is the first dinosaur to greet you with spines on its neck. There has been speculation that these spines were used to make loud, threatening noise as the dinosaur passed through the forest.

Dilophosaurus is believed to weigh about half-ton. And, unlike the Jurassic Park series, there is no proof of spitting venom, as shown in the movies.

There has been much debate over Quetzalcoatlus–whether it vaulted itself into the air using its heavy muscled front legs or did it hang-glide to get airborne off a cliff? While another possibility was that it didn’t fly at all, but used its hind legs to hunt for prey. Before leaving Naples Botanical Garden–click a picture at Pachyrino Photo Op at South Grove to record your dinosaur encounter and discover your inmost paleontologist at the Hadrosaur Fossil Dig Pit located at Suzy’s Bali Hai. 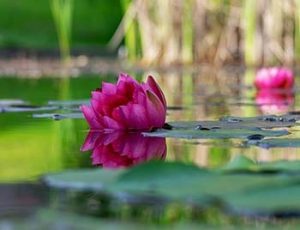 While you are visiting–which, if you want to catch the dinosaurs, should be before the exhibit ends on June 3rd–take time for lunch at the casual, moderately priced, Fogg Cafe, which features a creative, chef-drive menu, using local, sustainable products. The menu changes seasonally, focusing on a setting that incorporates a garden-to-table menu of dishes, such as, mango chicken salad, vegetable salad, shrimp and calamari ceviche, chicken wings, hot dogs, hamburgers, other sandwiches, French fries, soups, and deserts. The eatery is housed in the visitor’s center, open for breakfast and lunch only.

The botanical garden also hosts a variety of exhibits and events during each month of the year. May’s events include the exhibit of dinosaurs, Music in the Garden series, Botany through Art: Watercolor 3 with Elizabeth Smith, Mother’s Day in the Garden, and Memorial Day Appreciation and are sure to appeal to everyone.

About the author:
Jean Rowley is a freelance travel writer and photographer based in Lehigh Acres, Florida. She is a member of ITWPA and shares many of her adventures, stories and photos on her website: gallivanterstravel.blog