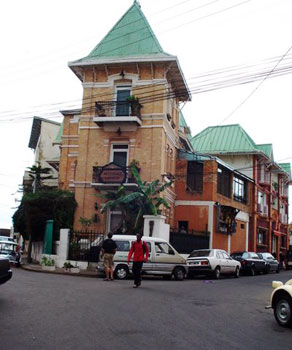 At the airport in Antananarivo the immigration kiosk was closed. A sign on the window told us that visas were €62. A handful of us waited, promised that someone would be coming to attend to us. It was hot and humid and most passengers had left for their varied destinations. Two men leaned against the kiosk and talked to each other of the business ventures they would be attending to in Madagascar. We smiled and sweated, nodding to each other with a strange air of camaraderie as we waited. I finally got impatient and strolled over to a man in uniform.

He immediately moved into action, speaking French to a group of loitering officials, and we were herded to the customs desk. The visas would be paid for upon departure.

Our guide to the hotel spoke a bit of English and periodically fed us tidbits about Antananarivo and the Malagasy people but his English was poor – we shouldn’t leave our room because of the political unrest. The traffic was the typical African phalanx of weaving cars and combis, pedestrians stitching their way through the speeding boxes of tin, a breath away from impact, rickety bicycles and rickshaws ambling along the roadside, men pulling carts of produce. As usual I was awed at the absence of collisions from such tight trajectories. We passed through rice paddies with compounds on patches of solid ground looking like hobbit houses. Great cones of dried rice husks sat among the houses. A Zebu or two plodded through the paddies or vegetated on the grass by the roadside. Bright mosaics of laundry were left to dry on the embankments, littering the grassy slopes with shirts and shorts and undergarments. The hills and houses of the city rose before us like a sloppy layered sandwich, rich with life.

We would be at the Residence LaPasoa our first and last nights in Madagascar. The name had a funny resonance for me that would grow over the next nine days, and on our last night, a day after the coup, lush with Three Horses Lager, I went out onto our balcony overlooking the narrow street and called out to the standers and strollers and hawkers below, “Residence LA-PA-ZOaa!”

The kind and gentle Malagasy people below smiled. 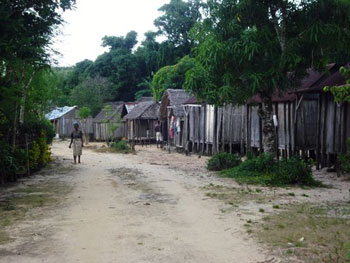 We were the only guests at Residence LaPasoa, as we would be elsewhere. There’s nothing quite like the threat of cyclones and a coup d’etat to keep the tourists away. After the coup, the journalists poked their noses into the pub, Ku De Ta, just for the name. It was all quite wonderful for us, but not for those gentle people who lived from tourism. But there was little to be nervous about. Life goes on; people go about their business because that’s what they have to do.

Unlike in Antananarivo, the porters at Ille St. Marie airport knew what the word no meant. A driver was waiting to take us halfway up the island to La Crique.

Marc, the owner, greeted us. “Welcome!”

We were almost alone. A French couple building a bungalow about 10 km up the island were having lunch. Rainy seasons and coups are terrors for the tourist business.

“But you came.” said Marc, as if we were courageous. He’d had more cancellations than he cared to remember.

I’m sure La Crique is lovely at any time of year or season of political unrest, but it’s especially nice in solitude. A group of women came for a night, a couple for a day. Mornings beneath the palms, the sea swaying and drumming a steady beat, the fishermen and sea traffic passing in lithe pirogues, as graceful and smooth as ice skaters, days crunching on broken coral, or ambitious snorkelling around the rocky islands ringing the bay, fine open-air dinners every night to the music of the ocean, nights filled with love and fun, by candle light after the generator was turned off. Marc loaned me his nylon stringed guitar after we’d jammed and I played beneath the herringbone of the thatched roof with rain beating down. It rained almost every night, but the days were filled with sun and splendour.

There are not many tourist activities on Ille St. Marie. Renting and touring on a motor bike is one, and there’s the pirate cemetery, or the zoological and botanical gardens. We chose to walk, in 40ºC heat, to have lunch at La Paradiso. It’s a small island but getting across its 10 km width is a mission. A new road has been built since cyclone Ivan but it’s difficult to imagine anything other than assault vehicles making the trip. 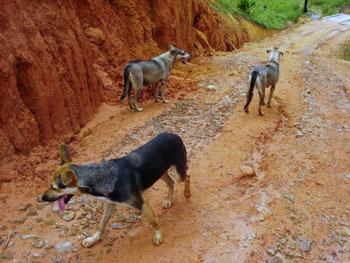 We had the dogs of La Crique with us, three of them, led by a little mutt who was a terror for chickens. With the emergence of a lanky Malagasy chicken from the rice or bush his ears perked and in two seconds the chase was on. The other dogs followed. They killed a chicken on that walk. I felt like I’d stolen from somebody. They weren’t even our dogs.

We passed a small village, people working in the fields, their backsides to the sky. They smiled and waved at us, or asked, “You need boatman?” high above the sea. There were patches of indigenous vegetation but the land has been well worked over.

We were greeted by Florance, who led us to his mother’s restaurant. Throughout lunch he regaled us with the many things he could do for us, for very little Ariary. But we had no wealth to spare; we weren’t that kind of tourists. What a lunch it was! Chicken in coconut sauce, shredded crab in the shell, unprocessed rice, Three Horses, a finger bowl with purple petals, and peace. All harvested locally and cooked fresh, every bite a delight. As we ate the little mutt chased a village boy and bit him on his ankles.

We walked a long way next day, 20 km, looking for a restaurant at the top of the island. But there was no restaurant. We walked through villages with houses built on platforms above the sandy soil that would course with the water that flows to the sea in the storms. Despite a nagging feeling of invasion of privacy, especially with the dogs of La Crique along, I was glad for those walks and the life we’d seen.

When our time at La Crique was over, everyone piled into the bakkie: Joseph, Serafine, Venise, and a mysterious old man who had appeared two days before, with a typewriter perched at his back window. On the one-lane road we encountered a large red lorry and as various manoeuvrings and jockeying for position were executed we finally saw a giant chameleon. Its blue and white body was poised on a fallen palm frond. With left boob on my thigh, C leaned over to take the picture. 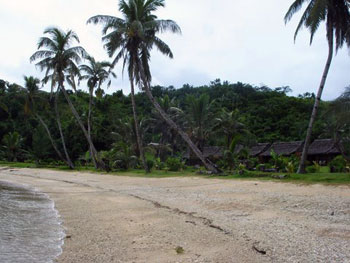 You get to the tiny island of Ille aux Nattes by pirogue, though you can walk the channel. The boatmen line up and beseech you to vote for their boat. We stayed at Baboo Village, next to a place owned by a South African, Ockie. He too had only two guests, Dutch with some business on Madagascar. They were aimlessly chilling with Ockie, watching DVDs on the widescreen in the evening and in the mornings sitting on the deck with coffee and whiskey watching the pirogues cross the channel with their cargo.

There’s a sandy trail that circles the island and you can walk it in a couple of hours. Stop by the Maningory Bar and Restaurant and you might see one of the few lemurs left. You can take a pirogue around the island, stop for a bottle or three, for you and the boatman, swim in the clear water where the Madagascar Strait meets the Indian Ocean, and make it back to the lodge before sundowners and yet another French meal.

On the plane back to Joburg about a half dozen journalists were on board. The coup was over and they were headed on to the next story. We waited on the tarmac for twenty minutes for the last of them, carrying his satchel, talking on his cell phone as he mounted the stairway. A woman across the aisle from me lifted her flaccid arms and clapped, slowly but loudly, as he entered the cabin. There were calls and jests. I got the distinct feeling that they all thought that they were the only ones on the plane, the other passengers more like faceless manikins than real live people. At the queue at customs they were whisked off like royalty.

I thought of two little girls who walked with us, trudging barefoot to school ten kilometres across Ille St. Marie, a journey they made every day, with empty hands and stoic hearts, and smiling villagers on top of the hills asking; “You need boatman?” I thought of the woman at a spaza shop; “You want three, four…” I asked C. “…or five…” said the smiling woman as she opened the shop. I thought of Paki the pirogue man of Ille aux Nattes, and Joseph at La Crique, and musty cemeteries with midget crypts, and the lithe climber who pulled down coconuts to fall on the sandy trail, and the shopkeeper who couldn’t understand our requests for the title of the almost rumba music we heard as we passed, and the sage guitar of Manhi at the Zebu Bar and Lounge on our last night in Antananarivo – and many others we’d encountered, and I thought that the journos had missed the story, and I was glad to see them go, like cockroaches underneath the molding.

Coups come and coups go, but the people soldier on, barely blown by the breeze. 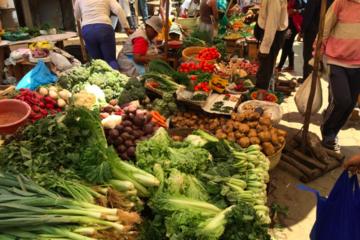 During the coup flights to Antananorivo were curtailed by many airlines. Things have stabilized somewhat since then, and it may be easier to get there. One can always fly to Johannesburg, and then on to Antananorivo on South African Airways or Air Madagascar. From Antananorivo flights are available to Toamasina on Ile St. Marie. La Crique will transport you to their premises. They will also take you to the beach on the south end of the island where you can catch a pirogue to Ill Aux Nattes. Check here for info about La Crique: www.lacrique-saintemarie.com and www.tripadvisor.com. Package deals are available. Languages spoken are Malagasy and French.

About the author:
Doug Downie is a semi-retired evolutionary biologist and entomologist,currently living in Sacramento, California, after eight years in South Africa. He also writes poetry and prose. Four books of his fiction can be found at www.lulu.com