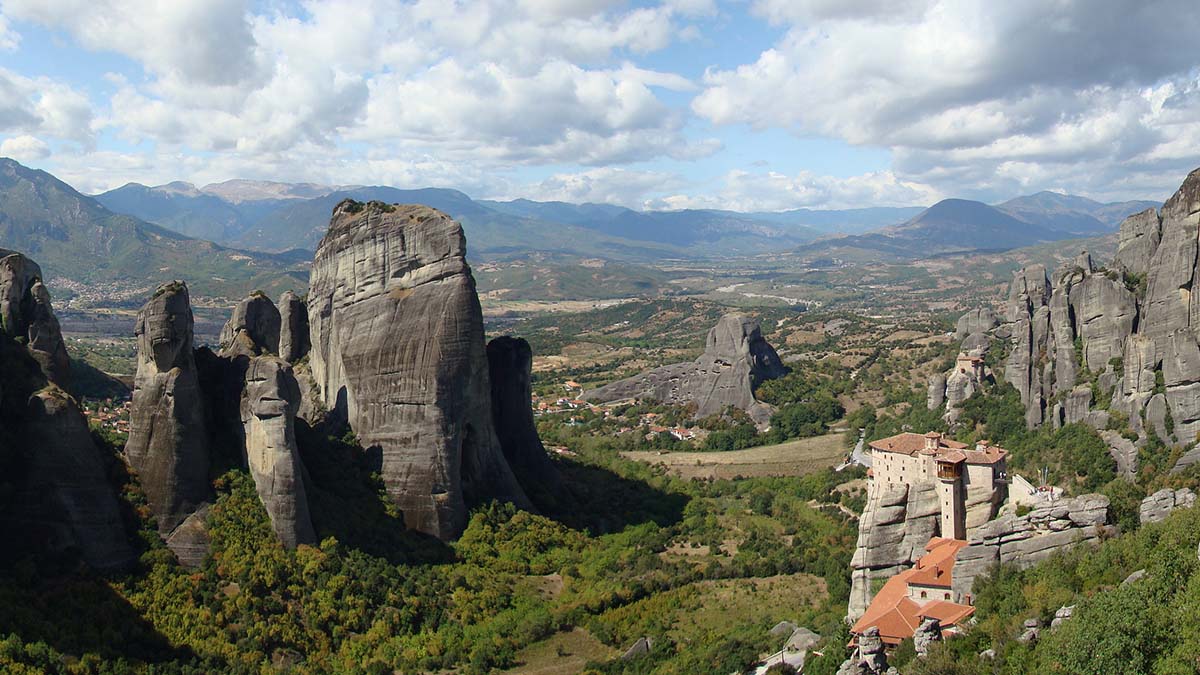 On a bright May afternoon, I travel by train across the lush Thessaly Plain in central Greece, through the valley of the Pinios River. 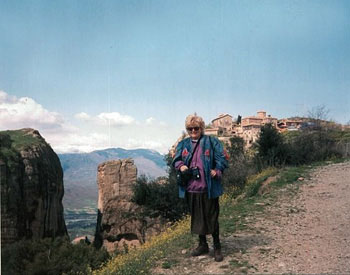 Green fields are patched with crops of yellow mustard, and splashes of brilliant red poppies carpet upland meadows where flocks of sheep graze idly in the sun. Across the Plain, sunlight glitters off the snow-covered peaks of Mounts Pelion and Parnassus. An eagle soars above a distant crag. Suddenly, out of the plain, gigantic spires of rock emerge, some higher than 400 meters, their strange shapes jutting up out of the fertile soil. Nothing I have seen in pictures has prepared me for this sight. Few places I have seen in Greece are so intensely dramatic.

Like the pastel escarpments in a Chinese watercolour, the towering rock fingers reach up to the cloudless sky. Their name, “Meteora,” means suspended in air. The most incredible feature of the Meteora are the monasteries that cling to the summits where once only eagles built nests. Five hundred years ago, at the end of the Byzantine era, during Turkish rule, this wild terrain became the refuge of pious men who fled religious oppression. Sheltered from the world, living in solitude and privation, the monks aimed to achieve Christian perfection.

Six hours from Athens, the train stops at Kalambaka on the edge of the Plain, below the Meteora. Here I find reasonable accommodation and set off to explore the hills behind the town, following a goat trail that winds toward the strange rock giant. In the warm pinkish glow of sunset, the huge rocks are suffused with an aureole of pale mysterious light. Alone, with only the sounds of nature, I contemplate the awesome sigh and cannot help but wonder how many solitary monks left their bones there, forgotten by the world they had renounced. 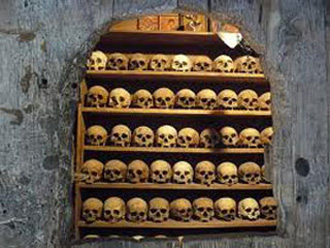 Early next morning, I ride up to the Meteora in the small bus provided for tourists. The road passes the village of Kastraki and winds past the rock pinnacles where you can see the remains of ascetics’ caves, many walled off with rocks and rotting timbers.

In the past, chain and rope ladders were the only way to reach the 24 monasteries here at the height of the 17th century, of which only six remain. If someone fell, it was God’s will. The charnel house at the Grand Meteora is a grisly reminder of those who died: their skulls line the dusty shelves. Today, visitors can climb steps cut from rocks and cross wooden bridges over dizzying chasms. Rock climbers come from around the world to scale the pillars. 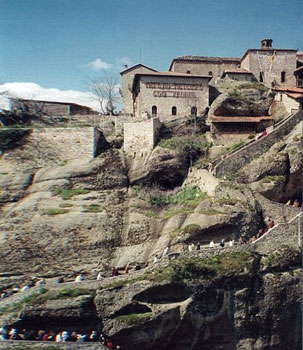 The first monastery you see as you approach is St Nicholas Anapafsas, built in 1527. It clings to the top ledge of an enormous rock. Uninhabited for years, its superb wall paintings by artist-monk Theophanes have now been restored.

The Monastery of the Transfiguration, also known as the Grand Meteora, is like a multi-storied castle complete with a bell-tower and red-tiled roof. It stands 700 meters above sea level and is reached by a flight of 115 irregular steps cut into the rock face.

A white-bearded monk directs the tour. He begins with the museum where there are invaluable icons and ceremonial vestments. He explains that during Byzantine times, these monasteries were generously endowed by Greek royalty, who regarded it their duty to donate riches and land to the Church. As a result Grand Meteora became one of the most important religious communities in the region.

Reached by climbing 195 steps, the Monastery of Varlaam, next to the Grand Meteora, has a church elaborately decorated by the famous hagiographer, Franco Catallano as well as a library with priceless manuscripts and gospels. 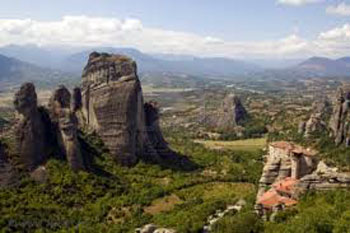 Agia Tria, the Holy Trinity, built by the monk Dometius in the late 1400s, is on a pinnacle reached by a circular flight of 140 steps. The view is staggering. I feel suspended in a breathless void.

Between the summit of the Holy Trinity and Varlaam, Roussanou perches on an isolated precipitous rock. Linked to the rocks next to it and reached by another circular flight of 140 steps, Agios Stephanos is a small dark place with wooden ceilings. Today, about 24 nuns live here and at the Roussanou monastery.

In Meteora, the spiritual world matters, not physical life. I look out across the plain toward the hazy summits of the Pindos Mountains. I see and feel how the landscape reflects the monks’ life, lonely yet inspirational. Despite the stream of tourists and souvenir stands, high atop these isolated rocks you can still sense the presence of God.

Train: There are trains from Thessaloniki and Athens. From Athens the trip is about six hours to Kalambaka. Change trains in Paleofarsala.

Buses: from Athens, Thessaloniki and Ioannina to Kalmabaka and Kastraki.

By Car: from Athens (350 kms) about 5 hours or from the north along E 87 between Ioannina and Larissa.

Visiting the Monasteries: It is only a short walk between entrances to the monasteries, but you need a good set of legs. A bus service runs from Kalambaka. There is a small entrance fee at the monasteries. Plan to spend a full day. Check ahead as some are only open certain days. Until this century women were not allowed in the monasteries. Today women are admitted if modestly dressed. Sleeveless tops, shorts, min-skirts and pants are forbidden. Floor-length skirts and shawls provided at the entrance. Tank tops and shorts are not acceptable for men. Dress appropriately or you will not be admitted. Pay attention to signs regarding photos as in some areas taking pictures is not allowed.

Accommodation:
There are several pensions and moderately priced hotels in both Kalambaka and Kastraki. There is a campsite at Kalambaka, the closest village.

Best Times to Go:
December – March can be wet and cool.
May and June are the most ideal months to visit.
July 1 – mid-October is the high season.

About the author:
W. Ruth Kozak is the former editor of Travel Thru History. She spent many years both living in and visiting Greece, and during those times she visited the astonishing sights of Meteora twice. This is a unique area of Greece, and she recommends it as a special destination if you plan to holiday there.