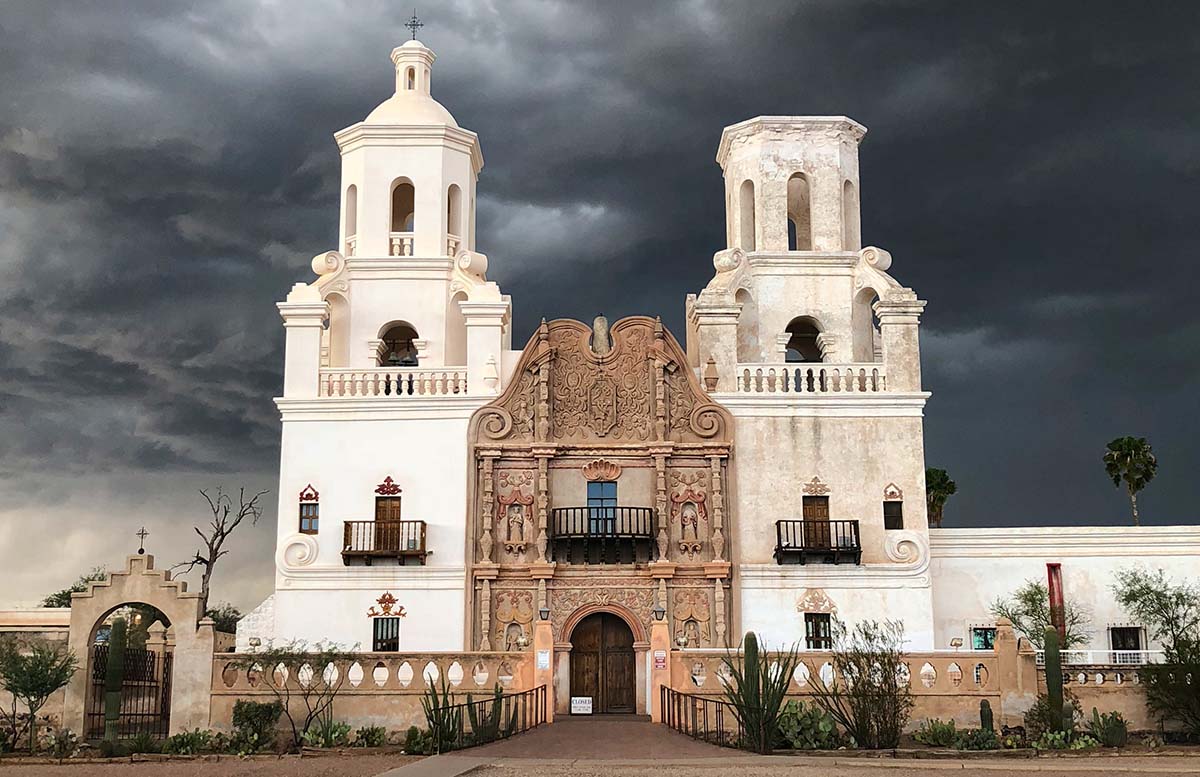 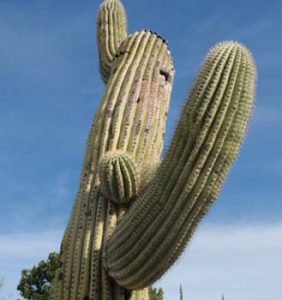 I wrinkle my nose against the dusty smell rising up from the crunchy gravel beneath my feet. A giant saguaro cactus floats before my eyes as the dry air shimmers and waves in the oppressive heat. I shield my face against the blazing sun reflected from the brilliant whitewashed building ahead.

I am on the Tohono O’odham Reservation in southern Arizona, walking to the beautiful Mission San Xavier del Bac, also known as the White Dove of the Desert.

Dedicated to St. Francis Xavier, co-founder of the Jesuit missionary order, the San Xavier mission was founded by Father Eusebio Francisco Kino in 1692. It is one of hundreds of missions established in the seventeenth and eighteenth centuries to convert the native peoples to Christianity. Completed in 1797, this is the oldest working Spanish mission and the best example of Spanish colonial architecture in the United States.

The White Dove has two tall, slender white towers which reach up like wings from opposite ends of the two storey church building. One of her wings, however, appears wounded. Each tower is supported by identical buttresses and both are pierced with tall, arched windows. However, while the left-hand tower is capped with a domed roof and a crucifix-topped lantern, the roof of the right hand tower is flat and unadorned.

There are several theories as to why a dome was never added to the second tower. Some say construction stopped when a worker fell off the roof. Others say the dome was destroyed by a cyclone or left unfinished so that the church would not have to pay building taxes. But the most likely reason is that the builders simply ran out of money.

The light brown central section of the building forms the body of the dove whose breast feather are formed of intricate patterns incised into the facade. Statues of saints in alcoves between high colonnades hold their hands up in prayer. At the top of the façade are two giant swirls, one on each corner. Although I could not see them from the ground, I later learned that a carved cat crouches inside the eastern scroll and a mouse cowers in the western one. These carvings have given rise to a local legend that if it ever catches the mouse the world will come to an end.

Delirious with heat, I steady myself at the entrance by placing my hands on the rough surface of a ponderous wooden door cracked and faded by the desert sun. The coolness of the stone interior is a welcome relief. I feel as if I have been transported away to an ancient church in Europe. A spiritual calm washes over me as I breathe the refreshing air and inhale the waxy smell of burning candles and the lingering scent of incense.

My eyes adjust to the dim interior and I strain my neck to gaze upward at the high soaring arches supporting the roof. Around the walls I see statues of saints and angels and an array of murals. Some are faded and sadly in need of restoration. Others appear unfinished, lending support to the theory that the church builders ran out of money. 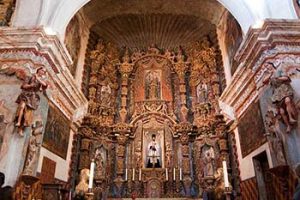 The front of the church is dominated by a high golden altar, the design of which parallels the façade outside. It is covered with labyrinthine decorations and saints posing in alcoves. In the center a giant image of a priest in a black robe overlaid with a white surplice, Saint Francis Xavier himself, presides over the milling crowds of sightseers.

I watch visitors admiring the altar, staring at murals depicting the stations of the cross and taking the occasional snapshot. Oblivious of the throngs of tourists, the faithful kneel in prayer or light candles. A long queue snakes along the eastern wall. Curious, I join the end of the line.

As the line moved forward, I see a coffin-like glass case containing what appears to be the relic of a saint, a brown head sleeping on a snow-white, lace-trimmed pillow. The saint is covered in a pure white sheet scattered with humble offerings: photographs of children, small toys, even locks of hair. I had on several occasions seen the skeletal remains of medieval saints similarly displayed in Europe, so I watch with horrified fascination as people reach through an opening in the glass cover to caress the top of the head. Maybe I am hallucinating in the heat but, as people rub its crown, the head seems to nod a gentle blessing in return.

As I approach the saint, I realize that he is not actually a cadaver but a figure carved of wood. I am not sure whether I am relieved or disappointed but, sensing a powerful spiritual energy, I decide against putting my hand near the sleeping head and moved on.

I later discovered that the figure in the glass case started life as a wooden statue of the crucified Christ at Tumacacori, a mission further south on the road to the border town of Nogales. In 1849 the Apaches destroyed Tumacacori and Christ was transported to San Xavier, somehow losing His legs in the process. The statue is now revered as an image of St. Francis Xavier.

When I left the sanctuary of the church I was overcome once more by the powerful desert sun. On the far side of the parking lot a line of canvas awnings provided shade for food stalls run by members of the Tohono O’odham Nation. Craving a cold drink, I headed over to this inviting shady oasis.

The stalls displayed a variety of competing home-made signs offering Indian fry bread. Some menus were written on small blackboards with colored chalk. Others were flimsy cardboard squares leaning up against table legs or hanging from the edge of awnings. Since Indian fry bread was a dish I had never heard of before, I naturally had to try some.

Fry bread, I later learned, is not a part of traditional southwest native cuisine. Before European colonization the locals were farmers with a healthy, vegetable-based diet. In the nineteenth century, however, Arizona natives were forcefully relocated to unproductive land in New Mexico. The U.S. Government provided emergency food supplies to prevent the people from starving. These rations included a great deal of white flour, refined sugar and lard, which became the basic ingredients for the high calorie survival food known as fry bread. According to the U.S. Department of Agriculture, each serving of fry bread contains 700 calories and 25 grams of fat. Consequently, it is considered one of the main culprits in the high obesity levels among southwest native peoples. 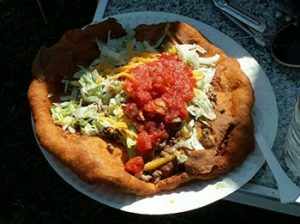 I ordered a taco from an impassive, generously built member of the Tohona O’odham Nation whose girth suggested an ongoing love affair with fry bread. I watched him carefully drop a dough patty into simmering oil and wait patiently for the precise moment to flip the bubbling pancake with a pair of tongs. When he judged the second side sufficiently cooked, he lifted the fry bread out of the oil, wrapped it in paper towel and filled it with ground beef, cheese and lettuce.

The paper wrapper was warm and slick with soaked up oil. The aroma of hot oil wafted up to my nose as I took my first cautious bite. The warm fry bread was reminiscent of carny food. It was crispy and flaky with a croissant-like mouthfeel. It was also extremely filling.

As I walked away from the mission, I thought about the saint in the mission and the food served outside. As different as these two things appear, both are cultural traditions with comparatively recent roots. Both are creative responses to tragic circumstances: one a holy relic created from a broken work of art, the other a beloved comfort food created from unappealing survival rations. Both have served redemptive functions, one spiritual and the other cultural. And they both reveal unique stories about Southern Arizona culture and history.

The Mission is nine miles south of Tucson, Arizona via Interstate 19. Take Exit 92 (San Xavier Road) and follow the signs. Admission is free. Please be respectful as San Xavier is an active place of worship.

The fry bread stalls open on an unpredictable schedule which may depend on the day of the week or the time of day.

About the author:
Lesley Hebert has travelled extensively throughout Europe and the Americas, as well as to Indonesia and Japan. She holds a B.A. from Simon Fraser University. Now retired from classroom teaching, she teaches English as a second language to Japanese students via Skype and writes web content, travel articles, short stories and poetry. She lives in New Westminster, British Columbia, Canada.