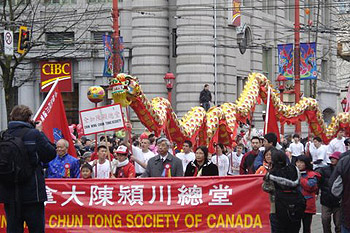 A West Coast mist that quickly turned into an icy downpour didn’t dampen the enthusiasm of the spectators or stop the lions and dragons from dancing in this year’s Chinese New Year’s parade. From marching bands, politicians, police, banner waving martial arts groups and pretty dancing girls, there was entertainment for all ages.

In spite of the weather, it was hard to find a good vantage point the crowd was so dense. I managed to wangle a spot close to the front where the little folk stood collecting the traditional red and gold envelopes containing gold-wrapped chocolate ‘money’. The giving of money gifts in these little red envelopes at the lunar new year is a Chinese tradition.

To the sound of clanging gongs and cymbals, and the thrumming of drums, the dazzling spectacle passes by. Red and gold are the predominant colours as red brings luck and scares away evil and gold attracts prosperity. Gold dragons weave and circle; bearded lions approach the crowd snapping their jaws; dancers twirl, their silk skirts whirling in a kaleidescope of vivid colours; Chinese elders march by proudly holding banners while troops of smiling youngsters: cadets, scouts, guides and marching bands, strut behind them. 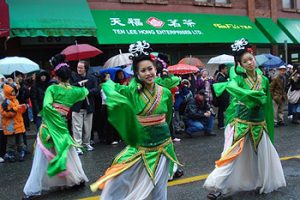 Vancouver has one of the largest Chinese communities in North America and Chinatown is one of the city’s most historic areas with distinctive architecture that has been carefully preserved.

The first Chinese immigrants came here from California in 1858 following the streams of fortune seekers who travelled north to find gold. British Columbia came to be known as “Gold Mountain” attracting many more immigrants from mainland China. After the gold rush ended, those Chinese immigrants found work in canneries or lumber mills and later helped build the Canadian Pacific Railway line. But once the railroad was built the unemployed Chinese men were limited to more menial jobs and restricted to living in an area of Vancouver that became known as Shanghai Alley. There was racial tension in the city causing riots, and the head tax imposed on the immigrants was increased limiting immigration from China. It was known as the “Chinese Exclusion Act”. 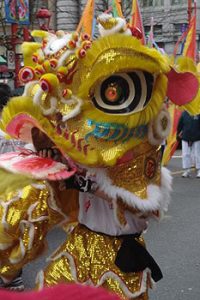 Fortunately these enterprising, hard working people survived, and today the Chinese community in the Lower Mainland of Vancouver has increased with many new immigrants arriving from Taiwan and Hong Kong. Chinatown was designated a historic area in 1971. The old Chinatown area is now being revitalized since a great many of the Chinese community now live in other areas of the city, in particular Richmond.

It’s the Year of the Rat, 12th year of the lunar cycle, and although I saw very few ‘rats’ in the parade, there were plenty of colourful dancing dragons and lions. The dragon, like the lion is a symbol of good luck to the Chinese who often use the term ‘descendants of the dragon” (long de chuan ren) as a sign of ethnic identity. The bold but frightening appearance of the dragon masks it benevolent disposition. The power and dignity of the dragon have given it a historic roles, as well as the symbol of fertility, wisdom. The dragon dance originated in the Han dynasty and was believed to have begun as part of the farming and harvest festivals. Like the lion dance, it is closely connected to the learning of Chinese Martial Arts. So the dragon dancers are usually members of local martial arts clubs. The teams carry the dragon on poles. They lift, dip and thrust as they coil around undulating in a sinuous manner, the dragon’s head sweeping up and down mimicking the movements of this powerful river spirit.

Accompanied by gongs, drums, cymbals and the crackle of exploding firecrackers the parade makes it way along Pender Street past throngs of delighted onlookers. I soon forget the weather and get into the spirit of the moment, jostling for a good viewpoint as I snap photos galore. I even collected a few of those lucky red envelopes. 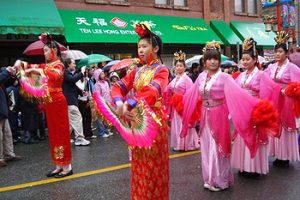 At the start of the parade, the five fluffy official mascots of the Beijing Summer Olympics are escorted by Chinese youths. Once the politicians, public service groups and various Chinese societies pass by, along with an impressive show of First Nations people dressed in their traditional button-blankets, comes the most vibrant display of beautiful Chinese women and young girls performing dances that show off their lovely silk garments. The crowd cheers with delight and the photo enthusiasts crowd to the front to capture the iridescent colours of the swirling skirts and sparkling head-dresses.

As the parade disperses, the crowds move along Pender Street to the Chinese Cultural Centre where a tent has been set up in the courtyard. Spectators are entertained with Silk road music and dancers and there is a display of paintings by the Canadian Chinese Artist’s Federation. It was a good opportunity for visitors to stroll the pathways of the Dr. Sun Yat Sen Gardens, a serene sanctuary after the busy excitement of Pender Street. 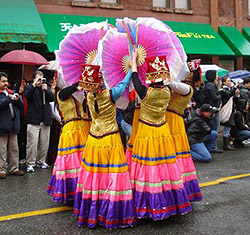 Later, I follow the lion dancers around from shop to shop where they perform their traditional choi chang. The lion is considered a guardian creature. There are lions of many different colours: gold representing liveliness, red for courage and green for friendship. The Lion Dance originated in China close to 1000 years ago. As it has a close relationship to kung fu, usually the dancers are members of a kung fu club. During Chinese New Years, shop owners tie a red envelope filled with money to a head of lettuce and hang it high over the door of their shop. The lion dance brings good luck and fortune to the business and the dancers receive money as a reward. The lion approaches the lettuce, acting curious as he moves in a cat-like manner, and finally bats down the head of lettuce which he pretends to eat. The lettuce leaves are spewed out but the money in the envelope is kept. There is a snap and crackle as a bundle of firecrackers explodes and the lion is enveloped in a cloud of smoke. The crowd cheers. The lion dancers move down the street to the next shop where the same ritual is performed.

The whole area of Chinatown is a delight to walk around in as you explore the well preserved historic buildings and shops with their decorated doorways, red signs, gold fabric rat souvenirs, crepe paper dragons, lanterns, intriguing trinkets, money envelopes, and mounds of exotic and local fruits and vegetables, fish (dried and fresh) bins of herbs and condiments. It’s a real cultural experience, especially on a day like this when the entire community is out to celebrate the Lunar New Year. 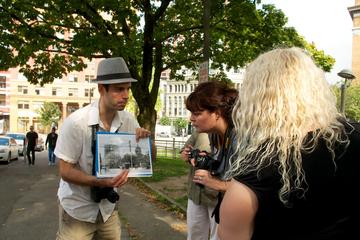