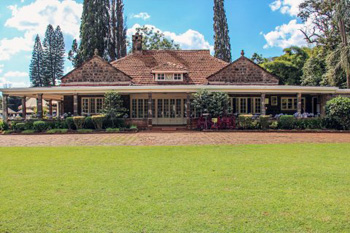 Often, as a teenager, before drifting off to sleep, the first lines of her novel floated through my mind: “I had a farm in Africa, at the foot of the Ngong Hills.” I read Out of Africa, Karen Blixen’s memoir chronicling the struggles on her Kenyan coffee farm, when I was sixteen. I read it and re-read it and read it again. Twenty-five years later, it was one of the rare books to survive my fourteen moves. My copy was creased and worn with age, stained from my old leaky waterbed and had so many dog-eared pages it puffed out like a fan. I had not read the book in years but her farm, her Africa, had become part of the geography of my mind. A place forged out of teenage longing.

It is dangerous to visit the places of novels, especially those read in the tender, impressionable years of high school. So it was with trepidation that I traveled to Kenya and found myself driving up the curved brick driveway of Karen Blixen’s farm, now a museum. She moved here in 1914 and was forced to leave in 1931 after enduring a series of cataclysmic events (divorce, syphilis, World War I, the Depression, drought, a fire, and the sudden death of her lover). I knew the place in my mind was probably nothing like reality; yet, I felt compelled to visit. 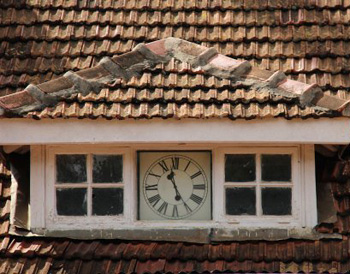 It took two hours to travel the twelve kilometers from downtown Nairobi to Blixen’s farm. The main highway, currently being re-built by the Chinese government, was under heavy construction. Whatever romance I had expected was wiped out by the intense drive. Horns blared. Thick smog reeked of car fumes. Engines idled without any forward movement. Men selling everything from magazines to bananas pressed up against the car. My driver advised me to keep my window closed so I wouldn’t be robbed. With one of the highest crime rates in Africa, Nairobi has the infamous nickname “Now rob me”.

Once distant from Nairobi, the city has swallowed up the writer’s 6000-acre coffee plantation. It’s now part of a wealthy suburb called Karen (named after the writer), surrounded by posh private schools, palatial estates, and tourist attractions. I asked the driver if there were any wild monkeys or gazelle still around. He shook his head and told me they were long gone. 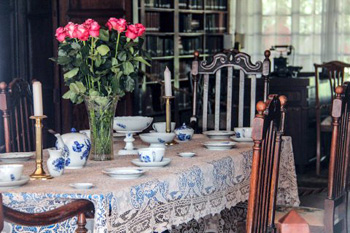 Still, as we drove up the laneway, my palms grew damp and I felt anxious, like I was meeting someone I had not seen in several years and was worried about making a good impression. Such is the odd relationship between a reader, a novel and the novelist. The reader feels a tenderness that is one-sided. Loving a novel is always unrequited.

As the house came into full view I recognized the stone bungalow farmhouse with the wrap around veranda. The cinnamon coloured tiled roof soaked in the morning sun. The floor to ceiling windows opened up, like doorways, so the wind blew dry dust through the house. I half expected Blixen’s Scotch Deerhound to run up barking beside the car. 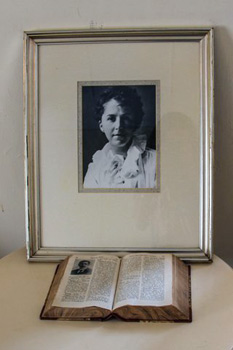 When I opened my door, the spicy smell of Cypress stung my nostrils. Norfolk pines and columnar cypress lined the immaculate grounds. Cultivated shrubs with fushia foliage bordered the front lawn. Delicate blue flowers opened to the cloudless sky. The wide lawn stretched across the front and the back of the house. There was a lot of activity as workers erected great white tents in the backyard for a craft fair on the weekend. The property is popular for weddings and special events.

Several tourists milled about the front yard taking photos. I followed a small hand painted sign that said “museum”. Behind a rickety desk sat a young man, looking bored. He changed his face to a smile when he saw me and offered to take me on a tour of the house for a small fee. When I declined, he stopped smiling.

I wandered through the house alone. Like most museums, it was strangely devoid of sound. An occasional bellow from one of the workers echoed through the living room. The dining room table was covered with a cream coloured lace cloth and set with blue and white patterned china as if friends were expected for tea. Red roses wilted in a glass vase next to two unlit candles. In the study, behind a sturdy writing desk, leather bound books with the initials DFH on the spine filled the floor to ceiling bookshelves. A small black and white photo of a young Karen Blixen, taken before her ill-fated marriage to Baron Bror Blixen-Finecke, leaned up against the wall. I tried to imagine the writer living here but found it difficult to imagine anyone living in this staged atmosphere. 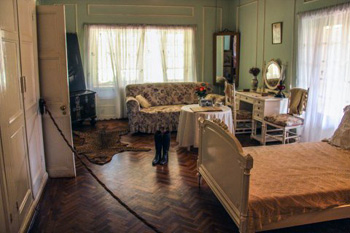 I walked into the bedroom. There was a tiny, white bed with a hard looking mattress. A pair of riding boots stood in the centre of the room. Several British tourists shuffled in behind me following their guide. They had paid for a tour and were fans of the 1985 movie, based on the novel, starring Meryl Streep as Karen Blixen and Robert Redford as Denys Finch Hatton, her lover. The guide began his spiel.

“Karen Blixen sold most of her furniture to her neighbours before she left Africa so these are all replicas. One of her relatives in Denmark owns her bed. When they filmed Out of Africa, the film crew generously donated the furniture to the museum. Those riding boots weren’t Karen’s but Meryl Streep wore them in the movie.”

The British tourists and I stared at the polished black boots. No one spoke. I stifled a laugh. My literary pilgrimage had brought me to an abandoned film set.

I slipped out through the small gift shop after buying several of her other books. They’re still published under her pen name Isak Dinesen. After meandering through the front garden I sat next to a juniper tree. Several rusted tools used in the early 1900s for coffee plantation were littered around me. A large wagon teetered with half of its front wheel embedded into the soil. I leaned against it, gazing back at Blixen’s house. I felt no closer to the writer visiting her home. I had no grand epiphany but the warm sun felt good on my body and I felt released from expectation. I peered above the house and recognized the dark outline of the rolling Ngong Hills. They stood, unchanged and immovable, against the vast blue sky. 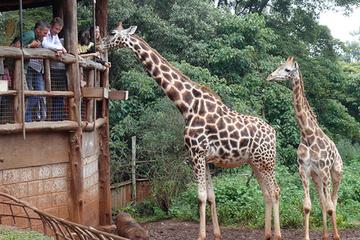 Out of Africa Tour: Giraffe Centre and Karen Blixen Museum from Nairobi

Museum:
For information on the Karen Blixen Museum in Nairobi

Food:
For a good restaurant nearby try the on-site cafe at the Utamaduni Crafts Centre
or The Karen Blixen Coffee Garden 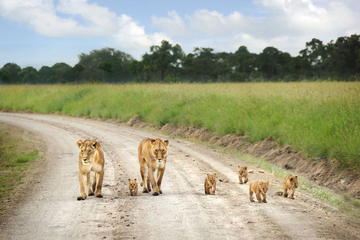 About the author:
Marcia’s writing has appeared in the Toronto Globe and Mail, skirt! magazine, Artscape and the CBC radio programs DNTO and The Wild Side. Come visit her at www.marciawalker.ca.

All photos are by Marcia Walker:
The Farm House
Closeup of the Clock
Dining Room
Picture of Karen Blixen
Bedroom