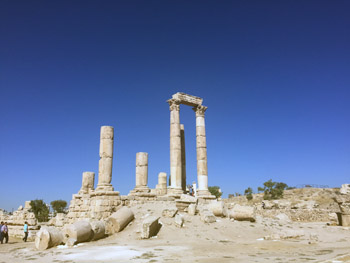 Amman, Jordan’s capital city and home to over 4 million of the country’s 9 million people, is characterized by ancient Roman ruins and modernity’s coffeehouses! A city of contrasts, with its ancient origins on display in the heart of the city and among the city’s hilly terrain. Yet, it is no stranger to modern convinces with Samsung stores littered among the narrow winding streets and fast food franchises situated next to typical Jordanian eats.

We started our first morning in Jordan, with a trip the Amman’s highest hill, Jebel al-Qalia, to visit the Citadel. Atop Jebel al-Qalia lies the massive remains of the Hercules temple, built during the reign of Marcus Aurelius in the second century A.D., and the fist of Hercules, the only remaining piece of the estimated 13 meter statue erected at the site, its shattered pieces long since pillaged. There is evidence that the Jebel al-Qalia has been occupied since about 1800 BC due to its strategic location. From the top of the hill, you can see the the Roman Theatre in downtown Amman, cut into the side of a mountain, likely to protect many of the 6000 spectators it could hold, from the sun. Built in the 2nd century A.D. it is an impressive remnant and the most popular attraction in Amman for tourists.

When I say tourists, do not think that you will be among hundreds of onlookers when you explore Amman. The first thing I said to our guide, Awad was “Where are all the people?”

If you are looking for someone to help you plan and/or show you around the country. Get in contact with me and I can pass on Awad’s contact information to you. 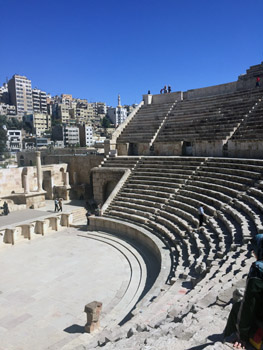 In Amman, You will not find thousands of tourists dotted like ants among the relics like you would see in Rome. You may encounter another tour group or other visitors, but for the most part, both the Amman Citadel and the Amman Roman Theatre were quite empty in the morning when we visited them. Tourism in Jordan is suffering due to the instability in the region. But despite the negative media coverage on the Middle East and the two million refugees camped near Jordan’s Northern border, we felt completely safe the entire time in Jordan.

After visiting the theatre, we wandered through the open air markets, with sellers hawking their goods to passers by. The boys were wide-eyed with the commotion of buyers and sellers, with the “Welcome to Jordan,” flashy smiles, and the auctioneer style chants, as sellers compete to gain attention (and well, to make as much noise as possible). It was a busy place, as Jordanians bought fresh fruits, veggies and other wares to take home. While Amman has built modern malls in recent years, and does boast a grocery store to two (one was even a Safeway), a lot of food is still bought from traditional markets or roadside stands.

Navigating Amman’s winding, narrow roads and hilly terrain makes it not a very walkable city. I would suggest you plan your day in advance if you do not have a car and driver. A quick look at the Nymphaeum, a partially preserved Roman public fountain which is currently being restored should be part of your day if time allows. Built in the second century A.D., it was believed this public bath contained a 600 square meter (6450 square feet) pool.

There are plenty of cheap eats in Amman, the local fast-food “shwarma” will cost around 2 JD (just under USD3.00) and consists of delicious slices of lamb or chicken sliced from a revolving spit. We stopped at a local shop after 12 but had to wait for it to open. Some shops seem to set their own hours while others will close briefly for prayer, and reopen after returning from the local mosque.

While we did not get a chance to visit the Jordan Museum, it will be a stop when we return. Home to Jordan’s share of the Dead Sea scrolls, as well 8000 year old statues, this international standard museum should not be missed in Amman. You will be able to see Amman’s Egyptian heritage, as the city was once known as Philadelphia, after the ruler Philadelphus (283-246 BC). It was also one of the cities of the Roman Decapolis, before becoming part of the Empire around 30 B.C. The museum will help you get a feel of Amman’s long and storied history.

In more recent history, Amman has been influenced by Arabs and Jews fleeing the 1948 Palestine War and more recently by refugees from Syria. In the three areas of the city where the Palestinian camps were built are still known as the “Palestinian Refugee Camps” despite the array of buildings, shops and schools. Only in name, do they bear any resemblance to their original purpose.

Since 2011 Syrian’s fleeing their native country have moved into Amman and other Jordanian cities. The influx of refugees has seen an increase in rents and food prices in Amman. Where rent was once JD250 (USD350), it is now JD400 (USD 565) and the price of food staples has increased as well. Jordanians are now seeing less money in their pockets as wages have not increased at anything close to the rate of inflation on rent and goods. In a country where half of the population is under 25, King Abdullah II feels his country is in dire straits. Unemployment is skyrocketing, and the schools and healthcare system are under extreme pressure. Jordan is a country historically known for its welcoming nature, but in a country where resources such as water are limited, the Syrian refugee crisis is putting pressure on this friendly country. 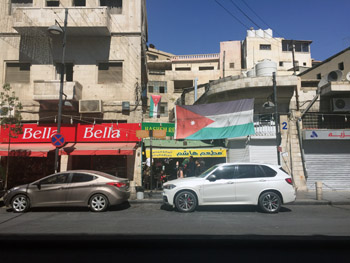 After wandering the winding streets of downtown Amman, a visit to the famous Hashem Restaurant in Amman is a must for any foodie. And to be honest, everyone should visit. Open since 1952, this open air restaurant is a favourite of King Abdullah II and almost every dignitary or celebrity that passes through Amman will find their way to Hashem. It does have indoor seating, but literally wedged between two building, most of the patrons spill into the patio and enjoy their meal outdoors. Their legendary falafel and hummus, combined with their cheap prices make it a favourite for locals as well as tourists. If you arrive right at dinner time, expect it to be busy. try and pick a non-peak hour to visit if possible.

Before visiting Jordan I was conscious of their conservative values. Despite being officially a muslim country, there is a large Christian population as well. Women are not required to wear head scarves, nor is it recommended. The Christian women do not cover their head, so unless you are Muslim, I do not suggest it (unless of course you are visiting religious centre such as temples). As a women, wearing conservative shorts will not garner you unwanted attention, but you will stick out of the crowd. People in Jordan do not dress the same as we do in North America. You could walk the streets of Amman wearing a tank top, or Lululemon style workout gear, but you will honestly look silly. It just screams tourist. I suggest some comfortable pants, I found myself in jeans often, with sandals and a t-shirt. Long sleeves are not necessary, a short sleeve t-shirt will be fine. Cotton and flowing fabrics will help keep you cool in the hot temperatures. 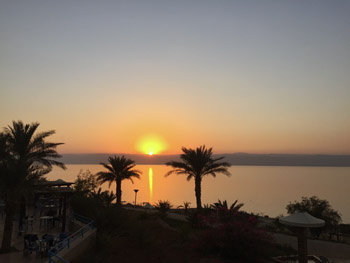 We traveled to Jordan in the fall of 2016. The current security risk from Government of Canada Travel Advice and Advisories indicated to “exercise a high degree of caution” but noted that there was no nationwide advisory, but to avoid traveling within 5 Kilometers of either the Syrian or Iraqi borders. Honestly, we could not have felt safer. I expected a high military presence, but while there was an abundance of security, it was not what i was expecting. I pictured heavily armed, camo wearing soldiers, and honestly saw 1 person with an automatic weapon on our entire 7 day visit. Before visiting I was not even sure if armed escorts would be common in the country.

There are different levels of police, from traffic police littered on the streets and highways, often attempting to direct the traffic at busy intersections. There is the regular police, who are doing regular police duties. The gendarmerie, who perform national security for the country (we mostly encountered them unarmed, in casual uniforms, as more of an event type security role), as well as the army. Coming from Canada, we are not accustomed to seeing heavily armed forces, Jordan felt just like home. there was no intimidation from the police or security. 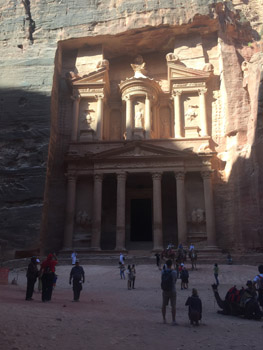 Major hotels in Jordan have metal detectors and bag scanners, which the locals are accustomed to, and it gives an extra sense of security to visiting guests. i did not find this caused me or my family any worry. In fact, the kids were (for once) happy to carry our bags and run them through the scanner. The doormen were always friendly and happy to show the boys pictures of their scanned bags.

In fact, everywhere we went, we encountered welcoming friendly people. Most Jordanians speak impeccable English, on account of their education and English being taught in the schools. Each person we met, whether it be a coffee shop or a restaurant, wanted to know where we were from, offered a sincere “Welcome to Jordan” and proceeded to give the kids handshakes and welcomes and interacted with them directly! The kids, while a little shy at first, were happy for the attention and picked up on the attention quite quickly.

Finishing off the day in Amman found us wandering Rainbow street as we stopped for an ice cream. Still full from Hashem’s eats, we made our way back to our hotel with our guide and driver. 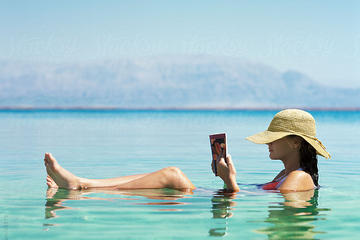 Full-Day Amman City Tour and the Dead Sea from Amman

Most visitors to Amman, spend a day or two to visit the city before heading to the Dead Sea, Jerash, Petra or Wadi Rum. Many day trips are popular from Amman and I would recommend at least three days to explore Petra, Wadi Rum and visit Aqaba.

About the author:
Lindsay is a wife, a mom to two little boys, a soccer player, a freelance writer, a photography enthusiast, a lifetime traveler and a lover of learning. She resides in a suburb of Vancouver when not jet-setting abroad, and is constantly exploring new ways to enjoy every minute she can with her family, and the pressures of living in our fast-paced society. Lindsay is the Editor and Founder of Carpe Diem OUR Way, a member of the BC Association of Travel Writers and a regular contributor to Urban Baby and Toddler Magazine.