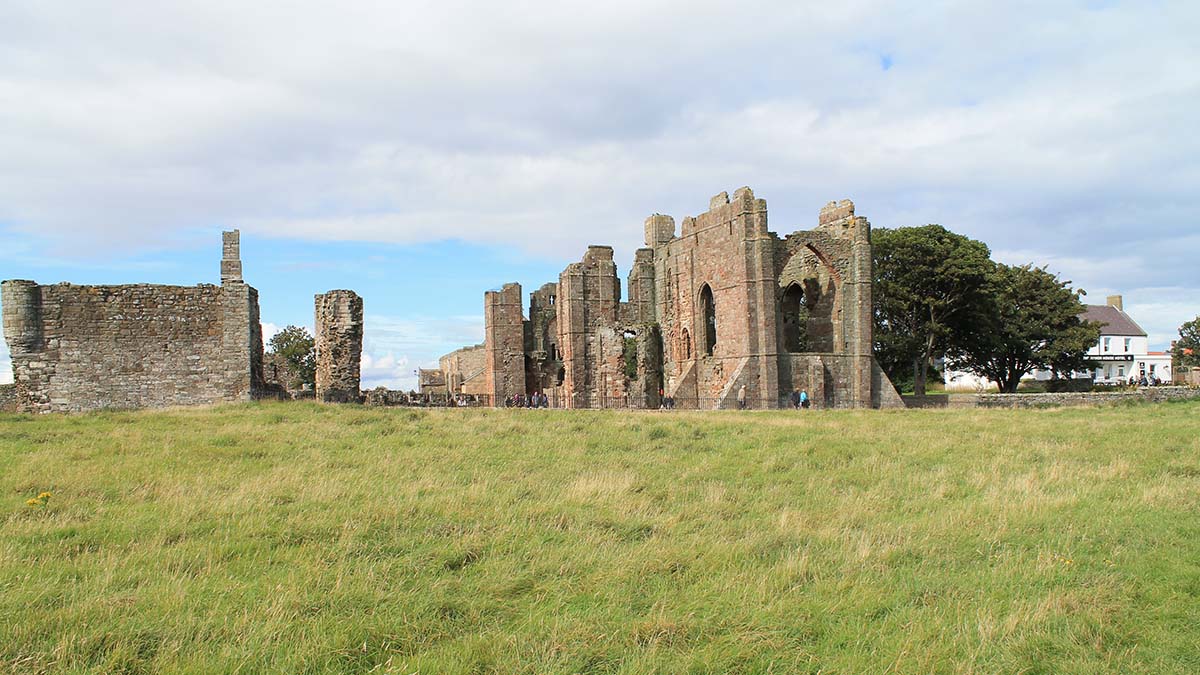 A Serene Sanctuary or Viking Venture

It is low tide as we pull up to the causeway that joins Lindisfarne or Holy Island to the mainland of Great Britain. We are struck by the serenity of the scene. The remnants of the North Sea’s high tide silently recede enabling us to drive over the causeway to the site of one of the earliest centers of Christianity in Britain’s Dark Age. Perhaps more famously, it is also the site of one of the first recorded Viking raids in the United Kingdom. In the year 793 AD the setting was not so serene. According to the Anglo-Saxon Chronicle written late in the 9th century, the…

…fierce foreboding omens came over the land of Northumbria and the wretched people shook; there were excessive whirlwinds, and fiery dragons were seen flying in the sky. These signs were followed by great famine and a little after…that same year, the ravaging of wretched heathen people destroyed God’s church at Lindisfarne.

Fascinated with the early history of the Vikings and the British Isles, the tidal island of Lindisfarne was a site that we had to see on our trip to the region. It is located on the northeast coast of England in the area called Northumberland, which lies along the northern border of England. We had been driving south from the Scottish Highlands and made our way towards Berwick-upon-Tweed which is an English coastal city about 2-1/2 miles or 4 kilometers south of the Scottish border. If you follow the A1 (highway) south of Berwick towards the town of Beal, Lindisfarne is only a short drive. 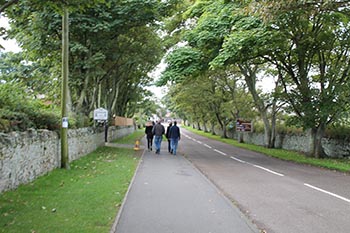 Lindisfarne Itself is about a mile or 1.6 kilometers off the mainland. There is a causeway that makes its way across the tidal flats and then winds through the dunes along the island’s shore. A walking path is also there for those who are so inclined. It is along this route that pilgrims traveled as far back as the 6th century to reach one of the great centers of Celtic Christianity founded by an Irish monk named Aiden. Posted at either end of the causeway and also on the island’s website are tidal charts. When planning your visit to the island you must plan around the incoming and outgoing tides. Failure to do so may result in being stranded on the causeway as the tide rises. The tide times differ from month to month and day to day so it is imperative to consult the charts for the day or days you plan to visit. You do not want to be caught by a rising tide. Because this has happened in the past there is an escape tower situated along the route. If you choose to walk, the Island’s website suggests that it is a good idea to be accompanied by someone familiar with the area. With an overcast sky the drive is rather bleak and, for those of us unfamiliar with oceans and tides, there is just a bit of apprehension as we head down the causeway. With the tide out there is a broad plain with pools of water remaining here and there. We hope we understood the charts correctly. 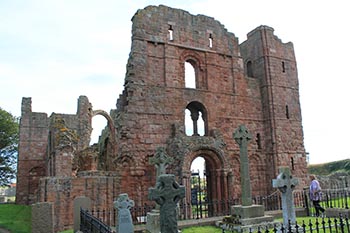 Once across there is a parking lot where visitors must leave their vehicles. Be prepared for a fairly long walk to get to the village, ruins and the castle. However, for those who wish to use it, there are shuttle buses that will take you into village and even up to the castle. They run at specific times so check the schedule. The walk to the town itself is scenic as you leave behind the barren shoreline. Trees line the street and there is fresh produce for sale at a roadside stand. Stone buildings in the town and cobblestone streets give a pervasive atmosphere of going back in time.

Because very few vehicles are allowed, it is very quiet and people wander about the streets at their own pace. You can visit the Lindisfarne Priory, which is not the original, which was destroyed by the Vikings. There is also a museum and visitor centre that details the history of the island. Here is a wealth of information about the founding saint of the monastery, Aidan and of Saint Cuthbert and the story of the Lindisfarne Gospels. This ancient book was written at the monastery about 700 AD in honour of St. Cuthbert. The original manuscript, which has survived to this day, is ornately decorated and is now housed in the British Library in London.

Although the museum does have interactive displays chronicling the history of the Viking invasions we find that this part of the history of the island is very low key. I am surprised at this because when I first heard about Lindisfarne, it was in the context of the Viking Invasion. Historians claim that many of the monasteries and religious settlements of the time period were situated along coasts, on islands and at river’s mouths. This avoidance of interior lands kept them out of political contentions. However they seemed not to realize the threat from the seaward side. The Vikings found unarmed settlements with amazing treasures in their churches. Although the Vikings conducted a number of raids plundering the monastery and destroying many of the buildings the actual invasion and settlement occurred on the mainland nearly a century later. The museum does, however, house a number of interesting Viking artifacts as well.

As we explore the village, we see, rising in the distance, a great rocky outcrop crowned by Lindisfarne Castle. Although it was built in 1550, long after the Viking era, its presence is not incongruent with the rest of the town There is a bit of an uphill trek if you wish to explore the castle but it is worth the effort.

A small fortification by castle standards, it was situated in an area that had been vulnerable to attack for centuries; first from the Vikings and later from the Scots. Henry VIII’s policy of dismantling church land holdings and monasteries had already put the priory out of use and stones from it were used to help build the castle. Over the years it was eventually used less and less until it was refurbished in 1901 in the Arts and Crafts style by Sir Edward Lutyen for its new owner, Edward Hudson.

Unlike many castles that we visited which are in various stages of ruin, this castle is completely furnished giving it an almost homey atmosphere. The view from the castle ramparts overlooking the small harbor and back towards the town is also impressive. In the opposite direction is the great expanse of the North Sea. Descending the pathway from the castle we find upturned herring boats, which have been turned into, sheds, another project of Sir Edward Lutyen. We make our way across a grassy plain towards the ruins of the monastery. As was with the priory, the ruins of the monastery are of a more recent era than those that were in existence in 793 but they add an air of solemnity not only by their enormity but also because of the statues of saints like Cuthbert that remain, As we wander through the ruins we get a sense of people’s devotion and their willingness to commit massive amounts of toil and effort to please God.

Heading back to the center of the village we pass by St. Mary’s Parish Church. It stands upon the site where the original monastery was built by Saint Aiden (some scholars believe the next Bishop named Finnian built the first wooden church). The service is in progress. Services are held three times a day every day of the week. 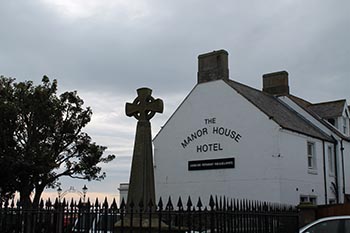 In the village there are various places to eat. There is an inn and many different accommodations including Bed and Breakfasts and Self-Catering units. To be able to stay on the island book well in advance as during the summer season it can be busy. Even places on the nearby mainland fill up quickly.

There are many other things to see and do on Holy Island and one afternoon is not nearly enough time to explore, read and absorb the historical information, sample the cuisine and just experience the atmosphere. Because of other commitments we had to move on but I would love to come back another time to actually spend a few days.

In retrospect I understand why the history of the Viking Invasion is so low key. It was a time of great terror for the people. As mentioned before, it was not an armed stronghold and the community would have been made up of mostly rural people and those affiliated with the church. The sight of the longships landing on the beach would have most undoubtedly had a most terrifying effect. As the Anglo-Saxon Chronicle put it, “…the wretched people shook…” Today it is peaceful with an almost hallowed air. It is a wonderful place to explore. 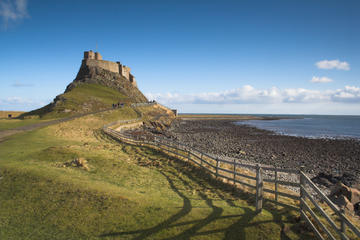 ▪ Consult the Holy Island website for tide charts, hours of operation, admissions and things to see and do.

▪ Consult the above website for shuttle bus times if you are unable to walk moderate distances.

▪ Bring change for the unmanned parking kiosk. Many businesses do not provide change.

▪ If you are a fan of historical fiction, Lindisfarne and area is mentioned numerous times in Bernard Cornwell’s “Last Kingdom” series.

▪ If you like movies, Lindisfarne was a filming location for Roman Polanski’s 1966 classic film, “Cul-de-sac,” and was used as a location for various scenes in other motion picture productions.

▪ Visit the meadery: St. Aiden’s Winery and check out the local crafts.

Note: Historical information is taken from Wikipedia and various tourist publications from the area.

About the author:
Bonnie Hart is a history enthusiast and enjoys traveling especially to places of historical significance. She has begun working as a freelance writer and her article “North to Alaska” was featured in Bus Conversion Magazine in September of 2013. Various newspapers have also published articles by Bonnie on a number of topics.

All photos by Bonnie Hart.