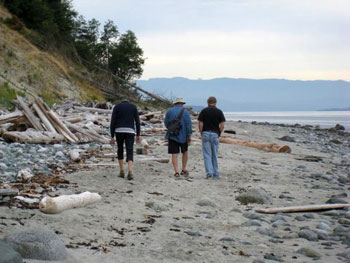 Beneath the steep sandy cliffs, crickets sing in the beach grass. I breathe the salty tang of seaweed. A flock of killdeer veers above the waves. In the sand at my feet is a puzzle of animal tracks. The hooves of a doe and fawn are easy to decipher, as are the hand-shapes of a raccoon. But who left these pointy-clawed prints? Then I notice the sinuous tail-drag: an otter.

I picture the sleek-furred animals that left these trails. I also imagine a British naval officer in brass-buttoned jacket and silver-buckled shoes striding alongside. About two centuries ago, Captain George Vancouver added his own footsteps to this very stretch of shore. 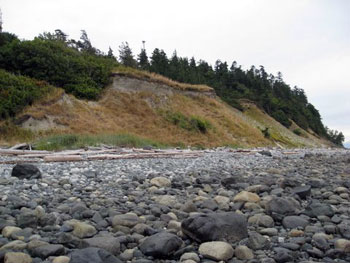 There are not many places on the Pacific Coast where we know for certain Vancouver walked, but this is one: the beach of Cape Mudge at the southern tip of Quadra Island, across Discovery Passage from Campbell River, British Columbia. In 1792, while charting the coast, Captain Vancouver visited here with his two ships, the Discovery and the Chatham. At that time, a Coast Salish village known as Tsa-Kwa-Luten thrived atop the sandy cliff. While the British ships sat at anchor on July 13, 1792, the natives paddled out in canoes and greeted the crews with fish and wild fruits in exchange for European articles of trade.

Vancouver said he needed to indulge his curiosity, and recorded his reciprocal visit: “We were received by a man who appeared to be the chief . . . and he conducted us up to the village by a very narrow path winding diagonally up the cliff . . . within a few degrees of being perpendicular. Close to the edge of this precipice stood the village. . . . The spot where it was erected appeared to be well chosen to insure its protection.”

A path no longer ascends the cliff-face, but the First Nation-owned Tsa-Kwa-Luten Lodge where I am staying offers a Heritage Walking Trail booklet indicating a “backdoor” approach. The forested route meanders beside a chasm that once protected the rear of the cliff-top citadel. Huckleberry bushes are laden with fruit that I nibble as I walk. The air is sweet with Douglas fir. I’m serenaded by whistling chickadees and breezes in the treetops. A footbridge stretches across the ravine and the forest gives way to a grassy meadow high above the beach.

I’ve reached the naturally fortified site of the ancient Salish village. It commands a sweeping view of Discovery Passage and the snowy peaks of Vancouver Island. I notice a small motorboat below, headed north in the choppy waves but making no progress. I’m reminded of Vancouver’s ships anchoring off Cape Mudge because the tide was too strong to make headway. The motorboat gives up and turns south. 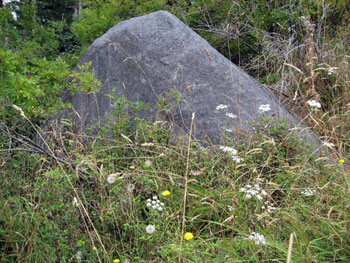 Captain Vancouver’s log mentions a distinctive giant boulder in the village and I find it half-obscured by grass and shrubs. I imagine Salish children’s laughter as they clamber up this boulder and slide down its sloping sides, their mothers admonishing them to keep back from the precipitous cliff. I envision cedar-plank houses over-looking the sea, racks of salmon drying over wood-fires.

The sky splits with a loud screech. A bald eagle soars so close I hear the wind in its feathers. It perches atop a wind-sculpted fir, resembling the highest creature on a totem pole. Like Captain Vancouver, I must learn more about the people who lived here and why they abandoned this beautiful spot.

The Nuyumbalees Cultural Center is situated in the present day Kwakwaka’wakw village of Cape Mudge, also known as Ucle-tah, a kilometer up the beach from Tsa-Kwa-Luten Lodge. It houses the priceless, historic “Potlatch Collection,” artifacts and regalia once used at ceremonial feast gatherings. The Government of Canada confiscated these items under the Anti Potlatch Laws of 1884. When the law was eventually repealed, one of the conditions was that the repatriated goods be publicly displayed. Nuyumbalees is one of two museums built in the 1970s specifically for this purpose, the other being the U’mista Cultural Center in Alert Bay.

When I first enter the subdued space of Nuyambalees I am greeted by the scent of cedar and the solemn, rhythmic music of drums and chanting. Two human figures carved in wood usher me into a world of breathtaking ceremonial artwork. 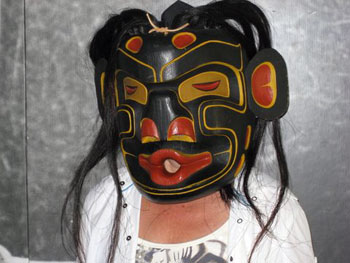 An array of masks is the main feature: ravens, wolves, bears, killer whales, mosquitoes, double-headed serpents, all used in potlatch dances. Included in each description is the original owner, and some of their photographs are also on display. Many have Anglicized names such as Billy Assu and Amos Dawson, but their Kwakwaka’wakw names translate to honourifics such as “Always Giving Potlatches” or “High Ranking in Feasts”.

One of the treasures is an exquisite ermine headdress. The frontlet has a carved hawk-head encircled with turquoise abalone shell. A capelet of forty white ermine pelts cascades over the shoulders. Originally it was given to Chief Moses Alfred as part of his wife’s dowry, then passed down through many generations.

I’m especially drawn to numerous brilliantly painted masks with meter-long beaks: the Cannibal Spirits. Some are crowned with carved human skulls or eagle-down tufts. All have their beaks tied shut. It is believed the masks snap their beaks if not secured. Traditionally they were hidden when not in potlatch use, wrapped in cedar bark or Hudson Bay blankets. Only for the final part of a complex, four-day dance were these masks worn.

The Cannibal Spirit Dance was the most important in Kwakwaka’wakw culture, used to initiate members into a secret society known as the Hamatsa. Possessed by the Cannibal Spirit, the young novice would disappear into the woods for ten days. To take away his human scent he wore only hemlock branches. Older Hamatsas occasionally went in and blew whistles, simulating the voices of supernatural forest creatures. They also taught him ritual dances and songs. Eventually the novice entered the Big House dancing wildly, gnashing his teeth, and even biting members of the audience. The Cannibal Spirit was feared to suck out people’s brains with his long beak. By the fourth day, the older Hamatsas, dancing in shaggy cedar-bark skirts and capes, tamed the Cannibal Spirit. I feel honoured to view such sacred works of art, yet saddened and humbled that the First Nations people, however proud they may be of these treasures, are forced to display them.

Photographs and touching are not allowed in the Cultural Center, but there are plenty of opportunities outside. Next door is an education center with a collection of masks and button-blankets to handle and even wear. Across the street stands an open-air structure with colourful totem poles carved by local artists. Petroglyphs are also scattered about, large stones with ancient carved figures.

I’m curious, though, why the Kwakwaka’wakw are now living here. Captain Vancouver met a different tribe, the Coast Salish. What became of those people down the beach in the cliff-top citadel? 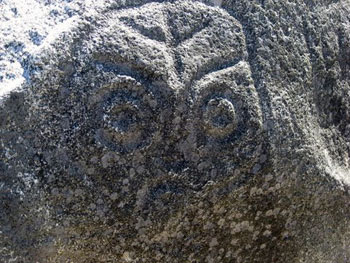 I learn that after Captain Vancouver’s voyage, a branch of the Kwakwaka’wakw known as the Lekwiltok descended from the north in their war canoes, with firearms acquired from European traders. Between 1792 and 1850, they raided and occupied numerous Salish villages and eventually commanded all of Discovery Passage—all save Tsa-Kwa-Luten, the village atop the sandy cliffs at Cape Mudge. So well fortified by nature, the Lekwiltok decided it was impossible to attack.

Across the water, however, the northerners occupied the village at Campbell River, one of the best salmon streams on the coast and the main source of food for Tsa-Kwa-Luten. A few years later, the Lekwiltok built the village of Ucle-tah, still occupied by their descendants, where I visited the Cultural Center. The people of Tsa-Kwa-Luten, their enemies now virtually on their doorstep and their supply of salmon greatly diminished, decided to leave. They joined their kin in Comox Harbour, a few miles south on Vancouver Island.

Cape Mudge became known as The Death Hole. Discovery Passage was an important route for the Haidas, Tsimshians and other tribes of the north who canoed to the Hudson Bay trading post at Fort Victoria. Fierce winds and strong tides made for treacherous travel past the cape. The worst threat, however, came from the fierce Lekwiltok who guarded the passage in their swift canoes. Some travelers paid a toll to pass safely but many met slavery or death. Most travel past Cape Mudge had to be undertaken by stealth in the dark of night. The people of Ucle-tah even attacked and raided European ships. In one instance, the entire crew of a Hudson Bay vessel was murdered when they stopped for water at Cape Mudge. Gradually, however, as European settlers spread throughout the coast, the people of Cape Mudge put away their arms and changed to meet the challenges of a new era. 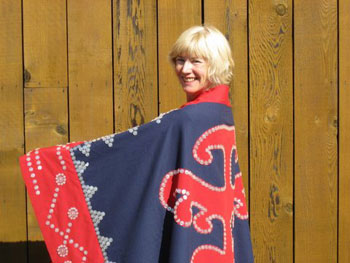 Tsa-Kwa-Luten Lodge is one way the native people of Cape Mudge have met the challenge of living in today’s society. The spacious lounge is designed like a Big House with a vaulted ceiling, the walls decorated with traditional art, including cedar paddles and button-blankets. The dining room features contemporary First Nations art. I feast on cedar-planked salmon, sip local Quadra Island wine, and gaze at the sunset over Vancouver Island.

Cape Mudge remains a wild place. A lighthouse now guides ships through the treacherous waters of the Death Hole, but you can still hear the Cannibal Spirits whistling through the fir trees. And I feel a kinship now with George Vancouver. We have both left footprints on this windswept shore. 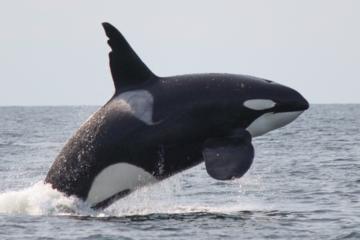 From Vancouver, take a ferry (about two hours) to Nanaimo on Vancouver Island. Campbell River is a two-hour drive north of Nanaimo. From downtown Campbell River the ferry to Quadra Island takes about 10 minutes. Ferry Information: www.bcferries.com

Tsa-Kwa-Luten Lodge has an RV park and cabins on the beach as well as the main lodge. All rooms in the lodge have ocean-view balconies. Tsa-Kwa-Luten website: www.capemudgeresort.bc.ca

The rustic Southend Farm and Vineyard is a short drive from Tsa-Kwa-Luten Lodge and well worth the visit, although the wine shop is only open on weekends. I recommend their Ortega white and Black Crow red (an Agria and Pinot Noir blend). www.southend.ca

The Cape Mudge lighthouse is a short walk north of Tsa-Kwa-Luten Lodge. Over 100 years old, it is still staffed and fully operational.

Ancient petroglyphs are a feature of Cape Mudge. A few have been moved outside the Nuyumbalees Cultural Center. Some are in situ on the beach in front of Tsa-Kwa-Luten Lodge. One of these is a lovely human face carved on a huge boulder, but accessible only at low tide. An excellent guide, Petroglyphs of Quadra Island by Joy Inglis, is available at the gift shop at Nuyumbalees and the bookstore near the ferry terminal in Quathiaski Cove.

♦ The Cultural Center: www.nuyumbalees.com
♦ A wealth of info about Quadra Island: www.quadraisland.ca
♦ An account of George Vancouver’s voyage, written by him in 1801, can be accessed at: www.canadiana.org

About the author:
Susan lives near Vancouver, B. C. She is a recently retired elementary school teacher and writes historical fiction. The British Columbia coast is one of her favourite areas to travel.

All photographs are by Susan Zuckerman.