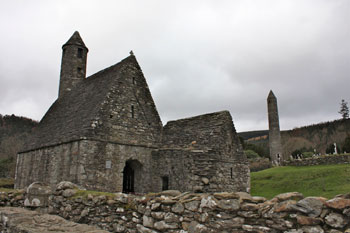 Ireland has been called the Land of Saints and Scholars because of its strong monastic tradition. Patrick, the Patron Saint of Ireland, brought Christianity to the island in the 5th century CE. Within one hundred years of his arrival numerous monastic settlements had sprang up around the country. Centuries later some small towns even had more than one monastery belonging to different orders of monks like the Benedictines, Franciscans, Cistercians or Dominicans. These monasteries thrived over the centuries and became wealthy.

Henry VIII, King of England and Ireland, viewed these monasteries as sources of untapped wealth during the Reformation and decreed that they should be closed or destroyed. His legacy provides you with many ruins to visit throughout the country. As such you need to be very choosy about where to spend your valuable vacation time. Two sites that should not be missed are Glendalough and the Rock of Cashel. 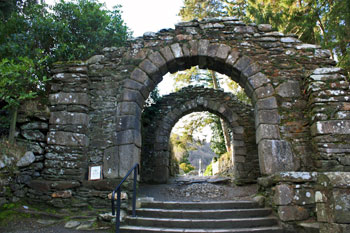 As we stood outside the former monastic site at Glendalough, our guide, Joan, directed us to the 900-year old gateway and indicated that the original structure had two round-headed granite arches supporting a timber roof. This was the gateway to civilization at the time. The lands beyond the monastic settlement teamed with highwaymen and other dangers. I imagined terrified individuals running past us through the gate to reach the cross-inscribed stone set just inside on the right as Joan explained that Glendalough was a place of refuge. The so-called “Sanctuary Stone” defined the point of safety for those on the run. Once a refugee passed inside the gate beyond the stone, he/she was safe.

Stepping inside the gate, you see a round tower protruding from the green foliage a short distance away. This 100- foot tall stone needle essentially identified the site of the monastery. This multi-purpose structure served as a bell tower, a treasury and a place of refuge in times of attack. The monks retreated inside through the entrance 10-12 feet off the ground, pulled up the ladder and closed the door. 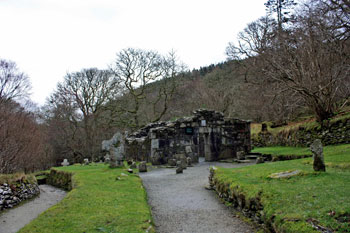 In the vicinity of the round tower, the remains of a cathedral, dedicated to St Peter and St Paul, consist of a 10th century nave and a 12th century chancel. The arch, once finely decorated, is constructed of limestone imported from Bristol, England. A wall cupboard and basin used for washing the sacred vessels used in the mass is still visible in the sacristy.

The guided tour portion of the Glendalough visit ended after short stops at the Priest’s House, St. Kevin’s Church and St Ciaran’s Church. Exiting the site, Diane and I drove up the road to a strip of land separating the upper and lower lakes. Glendalough (glean dá locha) translates to “glen of the two lakes”. 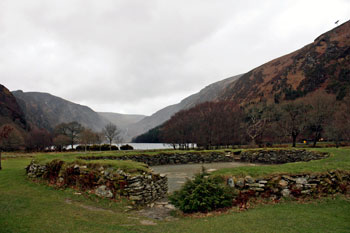 The postcard-like view of the upper lake features green hills gently rolling into the water on your left and trees at the water’s edge on your right. Opposite you in the distance, a stream descends the mountain into the lake. This tranquil setting greeted St. Kevin almost 14 centuries ago.

Parking our car at the gate, we walked to the caher, a 60 foot diameter stone ring fort of unknown age. The caher may have been on site during St. Kevin’s time but those who constructed it were not. Kevin, known as a hermit priest, originally settled at Glendalough because of its isolation. Others later followed because they were drawn by the presence of this holy man. 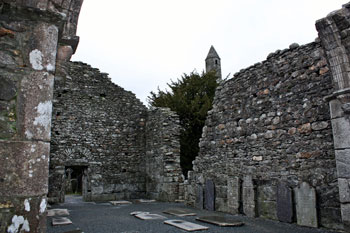 Walking on, you enter a grove of trees to find the derelict 11th century Reefert Church with its stone nave and chancel. This church was a major attraction for those on pilgrimage to Glendalough as St. Kevin’s relics were housed here after his death.

“Reefert” is derived from Righ Fearta meaning “the burial place of Kings”. History records that seven princes of the O’Toole Clan were interred at this holy site but their graves are not apparent in the churchyard outside.

Following a path beyond Reefert Church brings you to St. Kevin’s Cell. This basic home is believed to have been a “beehive-like” structure with a corbelled roof. Nothing remains other than the base. The pathway leading to St Kevin’s Cell was too muddy to continue so we ended our visit at this point and returned to enjoy the tranquil beauty of the upper lake over a picnic lunch.

The Rock of Cashel 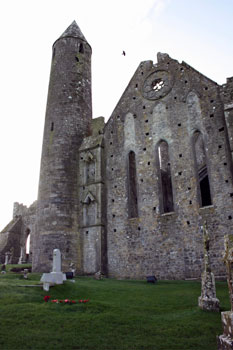 Slowly Diane and I climbed to the summit of the 300-foot high limestone promontory known as the Rock of Cashel. At the top, we were rewarded with a panoramic view of the green fields of County Tipperary below and the town of Cashel at the base. Despite the presence of the town below, the rock feels isolated.

From the 4th century CE, the rock was used as a stronghold for the High Kings of Munster. Today visitors find no evidence of 1700 years of settlement. The oldest structure, dating to the 12th century, is the 90-foot round tower. This tower was constructed of fitted stones after King Muircheartach O’Brien donated the Rock of Cashel to the Catholic Church in 1101. 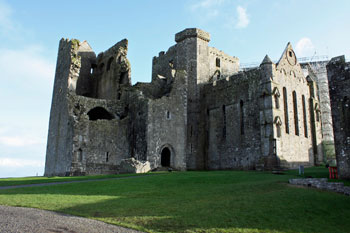 Set next to the round tower, you find the shell of the second cathedral on site, dating to 1235. The current gray stone structure is cruciform with a central tower. The nave, which was never completed, is shorter than the choir. The north transept houses three sarcophagi, dating the 16th century, each with carved bas reliefs of the apostles around the periphery. The Protestant Church of Ireland abandoned this cathedral in the mid 17th century and then had the roof removed to collect the lead for ammunition. The cathedral lacks a roof to this day.

Cormac’s Chapel, built by Benedictine monks, stands next to the cathedral. Dating to 1134, this Romanesque chapel has a German influence in its construction. The Abbot of Regensburg sent two carpenters to help build the twin towers on either side at the junction of the nave and chancel. 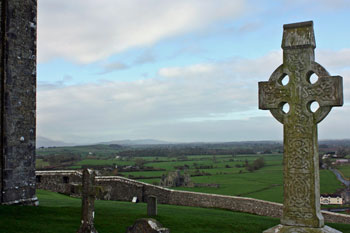 Inside the chapel, you find a white vaulted ceiling with plaster fragments falling off. The whitewash, dating from the Reformation in the 16th century, was used to cover the oldest frescoes in Ireland including those of the Nativity. An intricately carved sarcophagus at the back of the chapel might possibly be that of King Cormac himself.

Exiting the chapel, we again savored the magnificent view before us. Clouds were giving way to blue sky in the distance. Somehow the site felt a little less lonely with the birds singing. 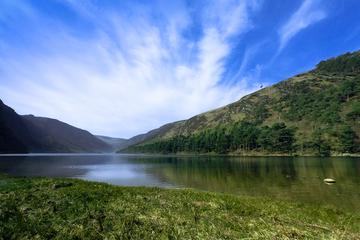 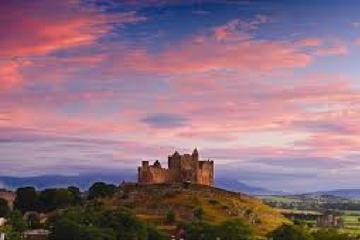