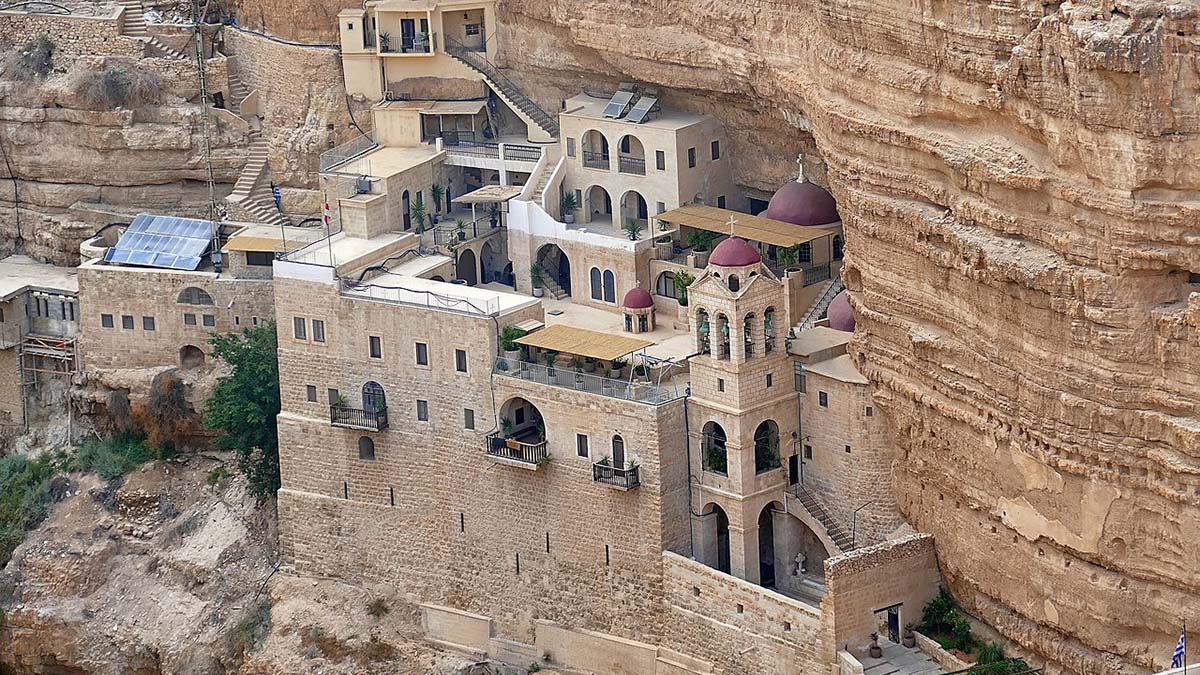 “Do you want to drive or do you want to walk?” Saed asks, stopping the car. We have arrived at the bottom of a small mountain on the outskirts of Jericho, in Israel’s West Bank. Believed to be the oldest city in the world, Jericho is also the lowest, at 244 meters below sea level. 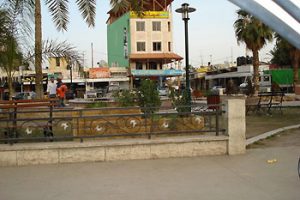 We look up the trail that winds its way to our first destination – Saint George’s Monastery on the Mount of Temptation, which sits at 350 meters above sea level. I elect to walk.

Before we can begin our ascent, we come across a woman who sits by a house alongside the road, at a table piled high with pomegranates. In this part of the world pomegranate trees are plentiful, and their juice is a popular beverage. Saed buys two cups, and we drink.

Many people visit Jericho because of its biblical significance as the first town that the Israelites conquered after they returned from their exile in Egypt. Its location in the West Bank, though, causes many others to shy away. Like in Israel, tourism in the West Bank waxes and wanes along with the political climate. Since the end of the Second Intifada in 2006, tourism has increased to both Israel and the West Bank. The Israel Ministry of Tourism reports that in 2008 tourism to Jericho was up 42.3 percent from 2007. Still, not many tourists visit the West Bank alone. The majority travel in tour buses or in self-guided groups.

I was traveling through Israel by myself, but going on my own to Jericho didn’t sound like a great idea. I decided to hire a guide to show me around. Israelis are not allowed inside Jericho, so I found Saed, a Palestinian Arab, who has driven me from Jerusalem and through the Israeli and Palestinian Authority checkpoints that lead into Jericho. I was glad I went with him. During our time in this town, formerly home to Yasir Arafat, I saw only one small group of Westerners.

The woman with the pomegranates speaks in Arabic to Saed, and he translates for me. Something is in her backyard that she wants us to see. Saed indicates that she has told him to take me through her house and out to the back. We enter her home, where several children are sitting on the floor, looking up at us as we pass. We come to a roofed concrete courtyard. In front of us is the sight the woman wanted us to see. A roaring brook runs past our feet, almost cresting its banks. To my eyes, this is a let-down. It is simply a creek. Saed sees it differently.

“Look how high it is!” Saed exclaims. “You almost never see this kind of water around here!”

Jericho is located in the Judean Desert, and water shortages are far too common. The past winter, though, was unusually cold and wet. Now water, for the time being, has become plentiful even here, in the desert.

We finish our drinks and begin our hike up the side of the mountain. After only fifteen minutes of walking the winding trail, we reach the entrance to the monastery. While we wait for one of the resident monks to open the door, we look out over the land. Immediately beneath us in the grass, a lone female shepherd tends her flock. Soon, the sheep are done feeding, and she begins herding them down the street.

A monk appears and admits us inside. In the 5th Century A.D., it was monks, also known as hermits, who built Saint George’s Monastery. Destroyed by Persians in 614 A.D., monks rebuilt it during the Crusader period. This Greek Orthodox monastery stands on the site where Jesus is believed to have fasted in a cave for forty days and nights. While inside, I am able to enter the tiny cave where He stayed. This is one of many such small caves in the area. Outside the monastery, on the side of another mountain, we see dozens more, which monks began inhabiting around the time of the construction of Saint George’s. These monks were killed during the Persian invasion, and many of their skulls and mummified bodies are kept inside the monastery. 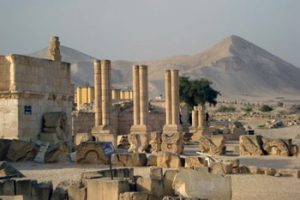 Next, Saed and I take a five-kilometer drive north to Caliph Hisham’s Palace, known in Arabic as Khirbet El-Mafjar. Construction of this palace is believed to have begun in 743 A.D. Unfortunately, it was largely destroyed by an earthquake before it was inhabited. Its bathhouse is still somewhat intact, though, along with its mosaic floor. Columns that withstood the earthquake still stand against the backdrop of the Judean mountains. We do see a few other people here touring the site, but they are Muslim Arabs, not Westerners.

Probably the site of most significance in Jericho is Tel es-Sultan or Old Jericho. This is where the town of Jericho originally stood, then was destroyed and rebuilt time and again throughout the millennia. Now twenty-three layers of civilizations lie one on top of the other, the most ancient dating back at least seven thousand years. Not much evidence of the multiple civilizations remain, save for a few small staircases and walls. Nevertheless, knowing that these are the oldest ruins in the world makes this an awesome sight. 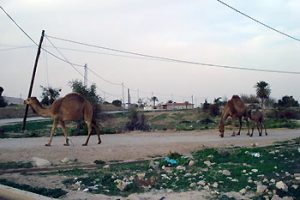 Old Jericho lies just a few kilometers yet several centuries away from modern-day Jericho, where we now head. Along the way, camels begin to cross our path. We stop and watch as what appear to be a mother camel and her calf walk along together, calmly and slowly. Soon they’re joined by a second adult. They travel not on the dirt or grass, but along the same road on which we travel.

We arrive in downtown Jericho to find that it is a small area, comprised of somewhat shabby shops that encircle a road. Saed’s wife wants him to buy some local fruit, and we pull over and go inside one of the markets. A few men are inside this small shop, milling around among aisles crammed with shelves. Saed and the men speak among themselves, while I look for fruit for myself. Along with citrus fruits and dates, Jericho is known for its bananas, and I buy a bunch to take back to Jerusalem with me. 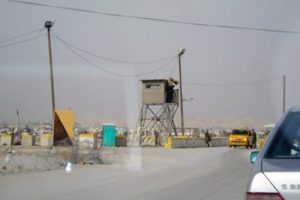 Now we pass back through the checkpoints that lead out of Jericho. The cars lined up waiting to cross number approximately fifty. Of those people who are visible in their cars, all appear to be residents of the area. As I sit, the sole Westerner crossing back into Israel from an area controlled by the Palestinian Authority, I feel glad that I did not avoid visiting this town just because of its location on the map of the Mid East. Its history-rich sights have made this a journey worth taking. 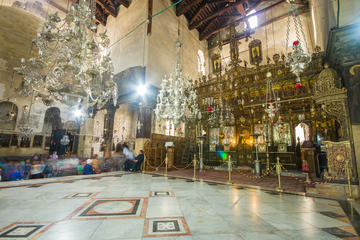 Bethlehem and Jericho from Tel Aviv

GETTING THERE: Virtually no Israeli rental car companies allow their cars into the West Bank. You can take a cab driven by an Arab driver or take an Arab bus to get into Jericho. If you want someone to show you around, you can hire an Arab tour guide or join an Arab-led tour group from Jerusalem.

DINING THERE: A shopping complex with a restaurant is across the street from Tel-e-Sultan.

About the author:
Sabina Lohr is an American on a self-imposed European six-week-a-year holiday schedule. She loves comparing other countries and cultures to her own and writing about her findings.