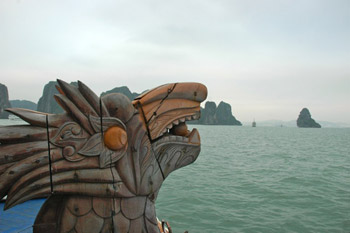 I stood in the silence, trying to decide where the dragon had plunged into the sea. Dawn had barely touched the sky. No other boats were about in the morning mist as mine drifted past islands and craggy cliffs straight from mythology. These came into being when the dragon of the gods, after gouging the mountains with his tail, plummeted into the sea. The foaming waves rushed in to flood the devastation, and when they settled, Halong Bay had been born.

Now the limestone islands and impossible peaks float in a sea of emerald. Later that day I would find a floating village (complete with a school and a bar) hidden among the 3000 islands (or maybe 1500 islands, depending upon your sources). Elsewhere there are forgotten grottos perfect for swimming and snorkeling. Simply cruising past in a small boat is spectacular. Passing the night under the stars is magical.

For a little while I enjoyed having the waters to myself. As we neared the town, however, any sense of the mystical evaporated. Halong Bay is a major tourist hub, filled with a frenzy of people either visiting or making a living from a UNESCO World Heritage Site.

The area down by the pier is a typical tourist trap where the usual touts and scam artists compete with over-priced markets for those in a hurry to buy presents for home and give proof of their stay. As all tour boats congregate here, the place is perennially crowded. Even the hotels look dubious, and the restaurants not at all promising. 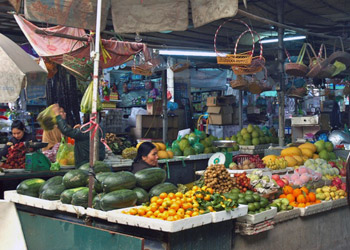 Yet to discover the true town, I had to be brave and run the gauntlet. Passing through the chaos I wondered if this was where the belly of the dragon had scalded the land. It certainly seems so. Or perhaps his fiery breath so scorched the earth nothing of beauty could grow.

Within some five minutes of walking uphill I came across parts of the town tourists rarely go. Away from the gaudy neon lights and dubious massage parlors the atmosphere rapidly changes. School children rushed by on their way home for lunch while old men sat in cafes, smoking. Bicycles were everywhere, with shops opening straight onto the street. Tiny lanes hid between buildings. Grandmothers sat on their doorstep nursing a baby or two while watching the world pass by. Hairdressers plied their trade on the street, while a few doors away builders were busy at work, hauling bricks and cement to the second floor with an intricate system of ropes, pulleys and buckets (which look remarkably like a stack of flowerpots). Amidst the chaos were small vegetable gardens and rows of herbs growing in pots. 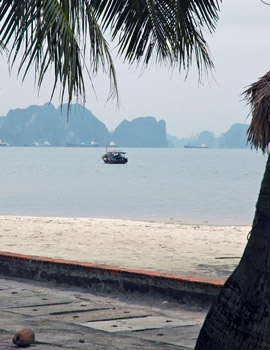 Further up the hill, some half hour from the port, a tiny laneway opened onto the local market, which had been somehow hidden from view despite its size. Once inside it felt totally chaotic, but with a mood completely opposite to the turmoil down by the water. With the stalls run largely by women (for the men are down by the port, scamming tourists), the place is roughly divided into sections: clothes, hardware, household items, fresh fruit and vegetables, then a wet market which stretches forever. The range of seafood is incredible – and largely unrecognizable.

A pair of policemen strolled past; this is, after all a communist country, and their presence is everywhere, always in impeccable uniforms. They chatted to various women at their stalls, and one had a play with my camera, experimenting with all the dials and settings. After taking our photo they vanished among the stalls.

A large covered area served as a food hall – large enough, it seemed, to feed the whole town. With nothing more than a small cooker over a gas burner, and her hair in curlers, a lady deftly prepared some pho (complete with the tiniest, and juiciest limes). Next came some thinly sliced beef stir-fired in a highly spiced sauce. The aromas were simply amazing. While we ate her mother came to visit, bringing the baby. As I nursed the baby the lady in the stall next door made coffee. I was at first dubious when, after making the brew in a small percolator which sat directly above the cup, she thickened the coffee with a dollop of condensed milk. My fears proved ill founded. Perhaps it was the setting, perhaps it was because I hadn’t found a decent coffee since leaving Saigon, but this java proved one of the best I have drunk outside of Italy (or Melbourne). The meal and coffee (for two) cost less than five Aussie dollars. 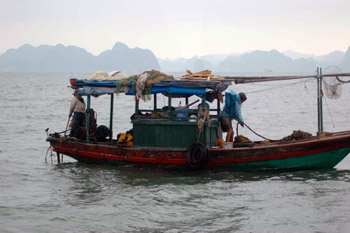 Nourished and refreshed, we headed back to the water. After all, this is why people come to Halong Bay. The afternoon began in a whirl of noise exploring the islands on a boat about the size of the African Queen, and about as sea-worthy. A trip amongst the islands is a rather crowded affair, but by now I had adapted to the chaos. Standing on the bow, I enjoyed the spectacle as our boat assumed ramming speed to gain prime position at any mooring. With all the boats covered with old tires, the moorings resound to the thuds of collisions, and the creak of wood as the boats jostled among themselves. 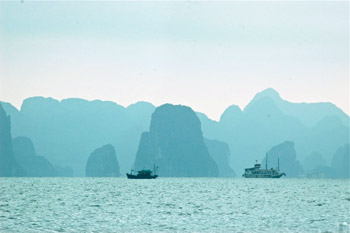 The first stop was Thien Cung Grotto – or Palace of Heaven. After climbing some 100 steps, a crowd of us went along a dark tunnel to the cave proper. Some hold this is the actual cave where the dragon sought refuge. It was simply huge. Neon lights of all colors highlighted the various formations: a dragon with a small man riding his back, elsewhere a pair of angel wings. Small rivulets ran down the stones and into vast chasms of nothingness. A dragon could easily live here – as could dwarves or a horde of orcs. There was a perfect cave for Gollum.

Only a few of the islands are habitable, but most are laced with caves and grottos, the result of the limestone slowly leeching away with time. Some are deemed dead, but others are still living – that is, the caves are still evolving as the limestone is eaten away, and stalagmites and stalactites are formed. 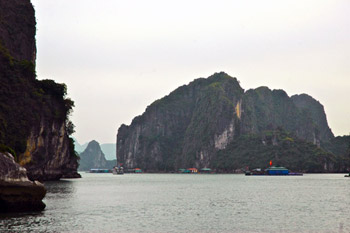 I sat in the bow of our boat as it potted among the islands. Each one, it seems, has a name such as Island of The Two Hens or Tea Pot Island. Many caves open straight onto the water as the islands rise straight form the sea to tower over everything, their tops covered with lush vegetation. The Surprise Cave was not discovered until 1901, and was used by the Viet Cong as a hide-out. At Ba Hung Cave, featured in the movie Indochine, a small grotto opens onto a lagoon inside the island, surrounded by walls of steep jungle.

As the sun fell a cool breeze came over the water, and I had the front of the boat to myself. Slowly the protective cocoon I had hid in for the day fell away, and I discovered the true beauty of Halong Bay. The crowds had been left behind, and before me stretched the still waters, empty of everything save the islands. They swirled about me in the rising mist, as if I was slowly traveling back to when the dragon had plunged into the sea, and both myself and Halong Bay were new born. 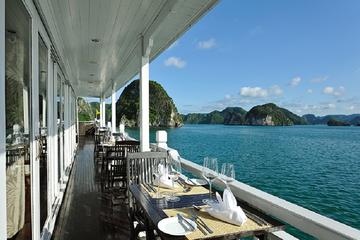 Halong Bay Travel website
Vietnam Tourism
Discover Halong Bay tour operators
Halong Bay Travel
♦ Tours can also be organized from either Saigon or Hanoi.
♦ If staying overnight, chose one of the many boat stays rather than within the town itself. 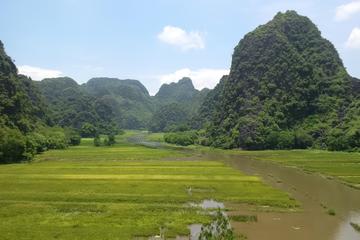 All photos are by Anne Harrison.