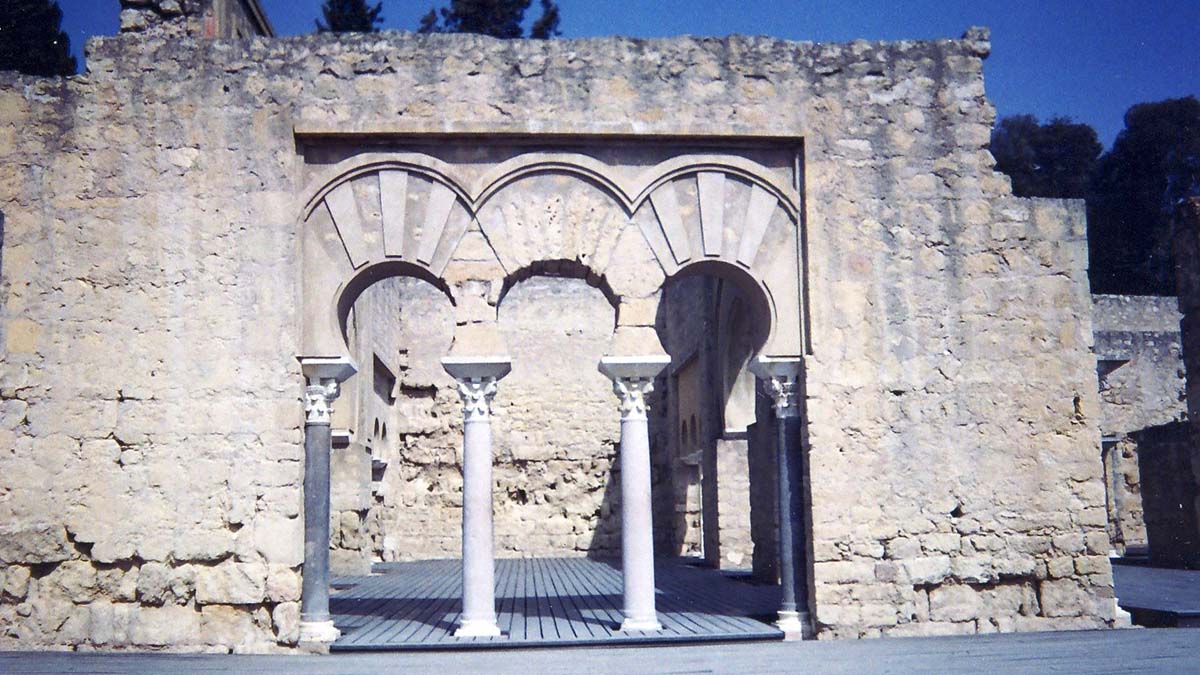 The year was 936 when Abd ar-Rahman III, the first Umayyad Caliph of Córdoba, began the construction of his magnificent Islamic city 5 miles west of Córdoba, the prosperous capital of al-Andalus (Islamic Spain). Legend has it that the Caliph named it Madinat az-Zahra (City of Zahra) after his favourite concubine from Granada.

According to legend, Zahra eventually soon grew most despondent despite all the wealth that surrounded her and luxuries offered. When the Caliph asked her what could be done to restore her happiness, Zahra replied that she longed to see the snow of the Sierra Nevada Mountains (Snow-Capped Mountain Range) of her home in Granada.

Not one to back down from a challenge no matter how daunting, Abd ar-Rahman III ordered rows and rows of almond trees to be planted close to each other at the gardens of the medina. When the white flowers of the almond trees blossomed in the springtime, it created the impression or illusion of falling snow and Zahra cried no more.

However, ‘Zahra’ is also the Arabic term for ‘brilliance’ or ‘shine’ and it is generally accepted that Madinat az-Zahra was named for its ‘brilliance.’ Chronicles tell of visitors traveling from afar to marvel at the richness and opulence of the palatial city. Abd ar-Rahman III spared no expense in its glorious construction hiring the best architects and artisans from all over the world incorporating materials such as gold, ivory, precious stones, and marble imported from North Africa. Twenty-five years it took over 10,000 men to build the shining city of Medina Azahara, as it is known in Spanish.

Constructed in a location of great natural beauty at the lowest foothills of the Sierra Morena Mountains, the new urban center functioned not only as the Caliph’s new residence but was to serve as the administrative center as well, while affirming, strengthening, and consolidating his power over his empire. 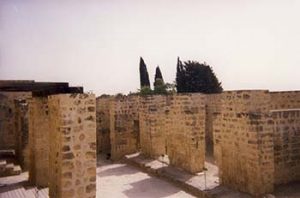 The fortified palace-city formed a rectangular shape measuring nearly 5000 feet long by 2500 feet wide that was enclosed and securely protected by double walls. Roadways and bridges were built and a reconstructed 1st century Roman aqueduct supplied water from the sierra.

In Medina Azahara you would find schools, libraries, workshops, stables, weapons factories, pavilions, and royal barracks. Cypress and palm trees bloomed amidst a fruitful landscape and wild animals lived in a zoo while exotic birds were kept in an aviary. Splendid features such as lavish gardens, orchards, marble fountains, large fish ponds, pools, courtyards, and terraces adorned the city. It is recorded that over 4000 columns were built from white, pink, and green marble and jasper shipped from the Phoenician city of Carthage. Medina Azahara was comprised of three descending terraces or levels over the Guadalquivir Valley. The common folk lived at the bottom terrace or lower level where you would find the markets (suq), inns (funduq), public baths (hammam), as well as bakery houses, cavalry housing, and the Royal Mint. The Aljama or mosque, also situated on this level but outside the walled precinct, was one of the first buildings completed in 941. The middle level was reserved for court officials where they resided and performed daily administrative duties in their governmental offices. Lastly, on the uppermost level or top terrace overlooking the city lived the Caliph and his family in their private royal residence (dar al-mulk) at the Moorish palace (al-Qasr). Excavations of this terrace have uncovered traces of stables and servant’s quarters. The ceremonial entrance to the al-Qasr (Alcázar), known as the Great Oriental Portico, forms part of what can be appreciated today. 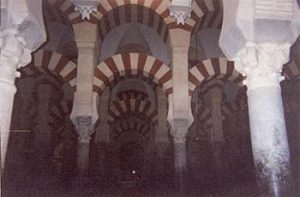 However, the heart of Medina Azahara was the particularly magnificent reception hall known as the Throne Room or Salón Rico (Rich Hall). It is said that visitors were mesmerized by its splendour and astonishing beauty. Here the Caliph received such guests as civil servants, politicians, and ambassadors. The hall opened to the south directing one’s gaze into the aromatic gardens. Thin sheets of colored marble lined the roof and walls giving it an elegant, translucent appearance while the interior was adorned with ebony, ivory, gold and silver tiles, marble columns, and arcades of horse-shoe arches reminiscent of the Great Mosque of Córdoba.

According to Arab historians, there stood in the center of the hall a fountain filled with quicksilver that when illuminated by the sun’s rays was shaken by a servant on cue as commanded by Abd ar-Rahman III. This motion caused the mercury to reflect from the sun’s rays flashing through the walls and ceiling with an overwhelming brilliance similar to that of lightning. Nothing like this had ever been constructed anywhere before, and although guests were generally frightened, the Caliph took great delight in this entertaining display.

However, the power of the Caliphate began to decline towards the late 10th century due to internal struggles within and in the year 1010, Berber troops sacked and burned Medina Azahara to the ground. During the centuries that followed, ruins of this once glorious city were constantly pillaged and plundered for the construction of buildings as far away as Marrakech. By the 15th century the vestiges of this forgotten city became known to locals as Córdoba La Vieja (Córdoba the Old or Old Córdoba.) Archaeological excavations began as late as 1911 and what remains today is only about 10% of what existed within the walled city; mainly about a third of the uppermost level comprised of the central area of the Alcázar. 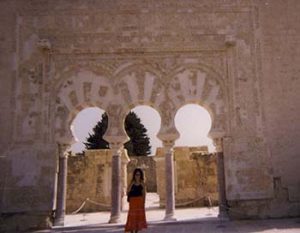 Although the brilliance of Medina Azahara was short-lived, it stands as the most important in Andalusia (Southern Spain.) The once palatial city is the largest archaeological site of Muslim Spain today and is candidate for becoming a World Heritage Site by UNESCO in 2018. This honour would lead to increased visitors resulting in greater funding for the much needed exploration, preservation, and further restoration of the site.

I had the pleasure of walking though these ruins imagining what the Shining City must have been like in all its glory during the 10th century when it was known as La Perla de al-Andalus (The Pearl of Al-Andalus.) For those with a special interest in archaeology and architecture, Medina Azahara is not to be missed when visiting Andalusia.

As of spring 2017, nightly visits will be available when more than 800 LED lights will illuminate the entire complex. Two daily buses from Córdoba center take you to and from the site in about half an hour, however tickets must be purchased a day in advance. Tickets and guided tours are available at tourist information points. The site is closed on Mondays and their telephone number is (34) 957 329 130. For more information visit: www.medinaazahara.org

About the author:
Ana Ruiz was born in Spain and currently resides in Canada. Ruiz has worked as a journalist and columnist and is also the author of seven books including two on the history and culture of Spain; “Vibrant Andalusia” and “Medina Mayrit; the Origins of Madrid”. Visit: ana-ruiz.weebly.com

All photos by Ana Ruiz:
Dar al-Wuzara (House of the Viziers)
Northern wall ruins (where the tour commences)
The Great Oriental Portico (archway leading to the Alcázar)
Interior of the great Mosque of Córdoba
Inside the House of the Viziers