My eyes search in vain for a sliver of light. The blackness is absolute and our shallow breathing the only sound. When the guide finally spotlights the frieze of beasts above our heads, our gasps of appreciation echo off the cave walls. 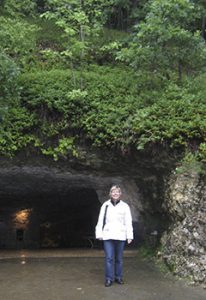 We collectively crane our necks to study the 13000-year-old paintings gracing the cave’s ceiling. We are in Grotte de Rouffignac, just south of Périgueux in the Dordogne area of southwestern France. In this region of dark forests, wending rivers, and rolling hills, inhabitants from prehistoric Cro-Magnons onward created decorated caves, gas lit towns and gardens. For modern day travelers like my husband and me, dawdling through these sites perfectly fill our days in the Dordogne.

On a gray rainy day, we agree that going into a cool, damp cave is an ideal alternative to getting wet above ground. We almost miss Rouffignac’s unassuming entrance in the woods and are soon on a little electric train whirring off into the darkness. The guide highlights large, round hollows in the rock where cave bears denned for the winters and long scratches on the walls where they sharpened their claws. The bears were long gone before early man created his art by the light of tallow lamps in these galleries and passages. Spotlights dance over paintings of bison, horses, ibex, wooly rhinoceros, and what this Grotte is famous for, multitudes of mammoths. There are single animals and groups. Some were engraved with chisels or, on some softer surfaces, with fingers; others were outlined in black. Using the curved surfaces of the cave and strong simple lines, the prehistoric artists captured the beasts’ enormity, power and shagginess. The anatomical correctness of the mammoth drawings vouches for their authenticity, the guide explains. Until modern researchers studied frozen mammoths in Siberia, only people who lived amongst these animals could have drawn them with such exacting detail. Why Cro-Magnons ventured so far into this cave to make these paintings is unclear. In this, and many other caves throughout the region, our relatives left powerful depictions of the animals populating their world. 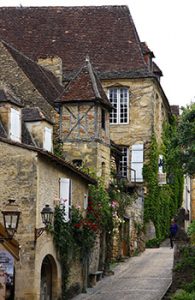 Fast-forward many millennia to when Dordogne residents were not painting on rock but building with it. Sarlat-la-Canéda is a bustling market town with a wonderfully preserved medieval centre. Narrow cobblestone lanes wind between golden stone buildings with black slate roofs. 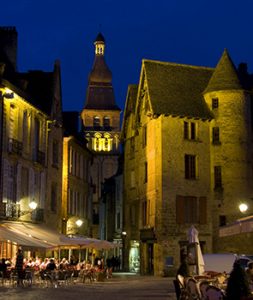 Many of the ground floor buildings date from the 13th century, while distinctively styled Renaissance houses were added in the 15th century. At night warm, glowing gaslights bring out the fine architectural details and highlight cheery flower boxes on mullioned windows. On a ramble through the maze of streets leading away from the main square, my husband and I savour the atmospheric ambience.

The bronze geese in “Goose Square” pay homage to one of the regional specialties, foie gras. We pass animated patrons at sidewalk restaurant tables and their jolly noise echoes down a deserted walkway presided over by leering gargoyles. Tomorrow, these streets will teem with shoppers attending one of France’s best markets. We will be amongst them, shopping for picnic supplies. 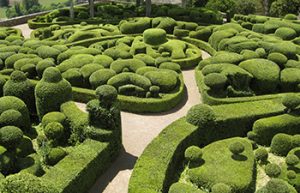 After rock caverns and stone buildings, I long for the freshness of outdoor greenery. On a bluff high above the Dordogne River, the gardens at Marqueyssac are the ideal counterpoint. We could tour the 18th century chateau but the garden paths beckon. Thousands upon thousands of boxwoods were planted in the 19th century along winding paths to give a fanciful, labyrinthine effect. 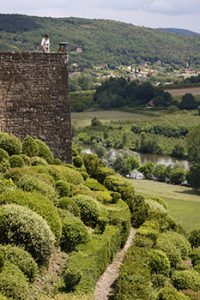 The bushes are hand pruned into bulbous shapes and swirling patterns. It is an extravaganza of green! Wandering further, I sniff the wafting fragrance of rosemary and lavender before I see the sizable herb gardens. Along sinuous paths in the forest of oaks, cypress, pine, and lime trees are delightful surprises of sculptures, stone huts, waterfalls, or hidden benches. We have no trouble finding a secluded spot for a picnic while appreciating the plants, the views, and the occasional peacock wandering by. At the end of the walk is the Belvedere lookout, with its expansive view of the river, rolling vineyards, far off chateaux, and the cliff hugging ochre houses of a town below.

It’s possible a distant Cro-Magnon relative contemplated this view before he descended into the valley in search of another cave to paint in. Of course, no mammoths or wooly rhinoceros roam the valley floor today, but we know from those old paintings that long ago, they most assuredly did. 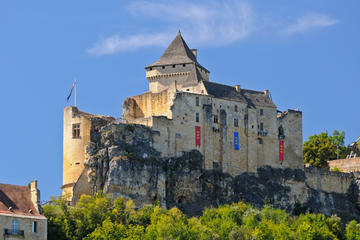 For photos of the cave paintings and information: http://www.grottederouffignac.fr/index.php/fr/

The gardens at Marqueyssac are a National Historic Monument. 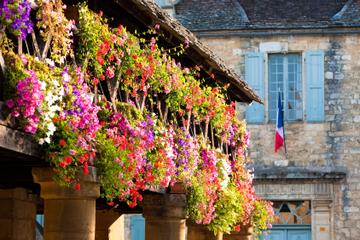 All other photos by Cullen Photos