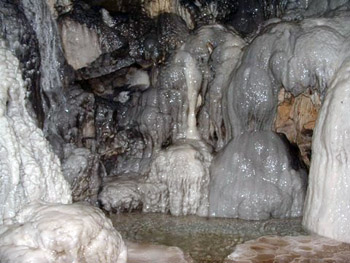 The Spar Cave on Scotland’s Isle of Skye is a truly wondrous place. In the 19th century it was a fashionable destination for well-to-do Victorian trippers, drawn north to the rugged Strathaird peninsula by Sir Walter Scott’s poem The Lord of the Isles in which he wrote of a mermaid bathing in a pool concealed deep within the enchanted cell. Steamers set a course here from Glasgow in the 1820s and ’30s and locally organized boat trips were always well subscribed. But at some point in history the cave’s popularity dwindled and these days only those with a real spirit of adventure find their way to the entrance of a secret underground world that must surely be one of Scotland’s natural wonders. 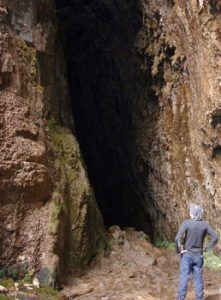 Accessing the cave is no easy task. To reach it I first had to make my way to Broadford and then wound my way down the single-track road that links the island’s second largest town with the tiny hamlet of Glasnakille, the last outpost of civilization on the peninsula.

Unlike many of the world’s spectacular cave systems, there is no visitor centre here. Indeed, the cave is not even signed from the road and admittance is restricted to just a few hours a day when the tide is at its lowest ebb.

A ruined stone barn just south of the road junction in Glasnakille marks the start point of a faint path down to the sea. The route drops through a deep chasm to reach a cove strewn with well-polished stone and sharp, angular rocks. Jurassic limestone cliffs rise up from the shoreline and it is difficult to imagine the coastal walker making much progress in either direction. But bear left and a course can be carefully picked out. The cave is not far off in terms of distance, but the terrain requires a slow and measured scramble over stones and larger slabs of rock, some of which can be perilously slippery.

The cave is just around the next headland and natural ledges cut into the rock assist here. The entrance remains hidden from view and it is only when you enter a vast ravine that it at last appears in all its majestic glory. 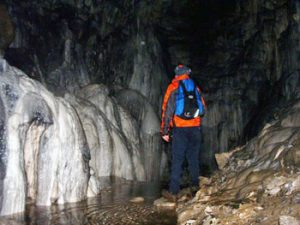 The canyon drives 200 feet inland and vertical walls of rock on either side rise at least 100 feet into the sky. John Macculloch visited the cave during his Scottish travels between 1811 and 1821 and likened it to ‘some deep cathedral aisle’.

At the top of this aisle, the moss-covered remains of an old wall stand guard over the entrance. It was built in the 19th century by landowner Alexander MacAllister to prevent people visiting without a guide. But it failed to deter some, including Sir Walter Scott who scaled the wall using a rope when he visited in 1814.

Beyond the ruined wall, two passages present themselves. The muddy tunnel on the right leads nowhere while the one on the left takes you deep into the mystical chamber where Scott’s mermaid ‘bathes her limbs in sunless well, deep in Strathaird’s enchanted cell… where dazzling spars gleam like a firmament of stars’. 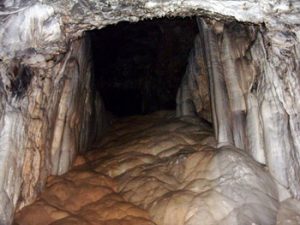 This ‘spar’ gave the cave its popular name, but its true Gaelic title is Slochd Altrimen, or Nursing Cave. This dates from the ninth century when a local princess fell in love with the son of the chief of Colonsay who was shipwrecked on the Strathaird coast. Unfortunately the fathers of the young lovers were sworn enemies and when she gave birth to a child, the baby was concealed in the cave to ensure its survival until the feud was settled.

At this point a torch is required as any remaining shreds of daylight are quickly lost, the passage curving into darkness to reach the base of an incredible flowstone staircase. Coated in a fine sheen of clear water, the marble-like slope at first appears impossible to scale. The calcium, however, offers excellent grip for walking boots and initially there are plenty of good footholds.

Half way up, the gradient increases and footholds are fewer, making the ascent more challenging. But persevere and the ground flattens out to form a plateau flanked by all manner of weird and wonderful configurations, centuries in the making and ever changing under the constant caress of the calcium-rich water that oozes gently through the limestone rock. The ceiling once boasted great stalactites but sadly Victorian souvenir hunters took these. It remains, however, a breath-taking sight, eerily quiet but for the constant dripping of water.

The narrow cut in the cliff certainly belies the true beauty concealed within. Casting a torch around the walls and ceiling reveals a multitude of strange natural creations, an unworldly mix of different formations. Some are smooth, highly polished orbs of calcium dripping with straggly alabaster dreadlocks. Others are more grotesque, peering out of the gloom like monstrously deformed faces, sprouting endless steams of gnarled tentacles. Pools on the floor ripple constantly under the eternal dripping of cool water, calcium deposits solidifying around the edges in thin sheets of unbreakable ice.

Beyond the plateau, the floor slopes away sharply, dropping to a deep pool of water flanked by flowstone arches. This is Scott’s ‘sunless well’. The only way across is to swim, but the cave ends abruptly a short distance on.

Unfortunately, visiting time to the Spar Cave is limited by the tide. Although the cave itself never floods, the channel outside fills completely with water as the sea rises, cutting the cavern off until it is ready to receive its next visitors.

The Spar Cave is by no means Skye’s only coastal cavern worth visiting. The island’s coastline is dotted with secret grottos. Some are completely inaccessible on foot, while others can only be reached at low tide. From Elgol, a path heads south to Prince Charlie’s Cave. It was here that the Jacobite spent his last few hours on Skye in July 1746 before leaving for the mainland and then, ultimately, France. Located on the coast at Port an Luig Mhoir, it is not an easy one to find. Near Peinchorran and The Braes, a strange dogleg peninsula extends out into the sea and here there is a proliferation of hidden caves, pinnacles and sea stacks. The most impressive feature is a brittle rock arch that spans a deep canyon. 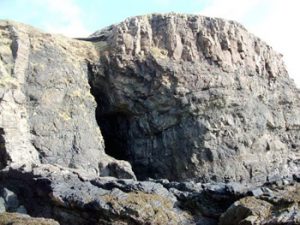 Piper’s Cave, at the southern end of Harlosh Point, requires a half mile walk across grazing land from the end of a loop road off the A863 that serves the scattered communities of Harlosh, Balmore and Ardmore. Where the land ends and the sea begins, a spindly 30-foot high basalt sea stack is the first indication you are on the right track. A steep path descends to the base of the stack and, with the tide low, it is possible to scramble along the rocky shoreline to the cave entrance. The mouth is impressively tall but the tunnel within tapers sharply into a dark, narrow passage.

My final cave hunt took me north through Uig on to the Trotternish peninsula where the island’s most northerly point, Rubha Hunish, tickles the Atlantic Ocean. A few miles down the west coast of this fat finger lies Uamh Oir, or Cave of Gold. This was to be a fittingly spectacular end to my cave quest, the pot of gold at the end of the rainbow. Although the cave cannot be entered on foot, it is visually spectacular from outside, featuring a pavement of hexagonal basalt columns similar to those found at Fingal’s Cave, on the island of Staffa, and at the Giant’s Causeway in Northern Ireland. It is a geological wonder, one of many I had witnessed on Skye, and the ultimate reward for a weekend of exhilarating and, at times, rather slippery, coastal exploration. 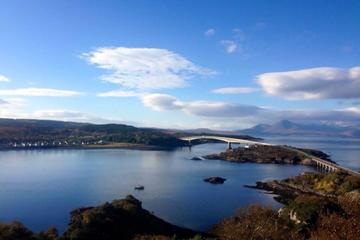 Getting there:
The Isle of Skye is a five-hour drive from Glasgow. Scottish Citylink operates coach services from Glasgow to Portree. The nearest railway station is at Kyle of Lochalsh.

Getting around:
Bus services on Skye are operated by Highland Country Buses. Service 49 runs from Portree to Broadford, Elgol and Glasnakille. Service 56 links Portree, Dunvegan and Bracadale while service 57A and 57B run from Portree to Uig.

More information:
The main tourist information centre on Skye is in Portree and it is open all year.

Check the tides:
High and low tide times are displayed in the window of the tourist information centre in Portree. Alternatively, log on to Isle of Skye tides chart.

About the author:
Based in Scotland, James Carron is a freelance writer. He specializes in features on hiking, backpacking, camping and practical conservation, both in Scotland and overseas and writes regularly for a number of UK consumer magazines and newspapers. His other interests include travel, mountain-biking and sea-kayaking. He is currently researching the life of a hermit who lived in one of the remotest parts of the British Isles with a view to writing a biography.

All photos are by James Carron.