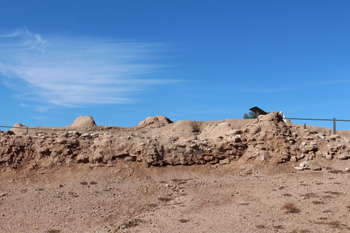 In the midst of urban Phoenix, Arizona, surrounded by sounds of the freeway and planes from nearby Sky Harbor airport, I stepped back in time a thousand years. I was at Pueblo Grande Museum and Archaeological Park, walking through the ruins of an ancient Hohokam settlement.

Phoenix was first recognized as a city in 1868. Driving on freeways through the vast metropolitan area of Greater Phoenix or viewing the city stretched below as far as you can see from the vantage point of Dobbin’s Lookout on South Mountain, it is hard to imagine Phoenix as anything but a modern city, but history of human occupation in the area dates back thousands of years. The Hohokam people lived in the Phoenix Valley from AD 450 to AD 1450. They settled in communities, built sophisticated irrigation systems, and were skillful farmers and creative artisans. 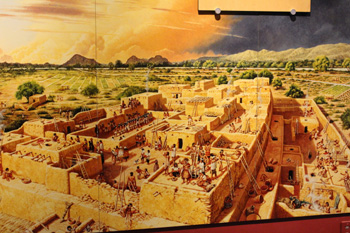 I wound my way through the ruins on a trail which took me backward in time. Pueblo Grande began as a small settlement around AD 450 and grew to over fifteen hundred people. The mound village was one of the largest Hohokam settlements in the area. At one time there were over fifty mound villages in the Salt River Valley. They got their names from the platform mounds at their centre. The mounds were urban centres with large open plazas where ceremonies were likely performed and were built with trash or soil and then capped with caliche, a lime-rich soil found in the desert which makes a good plaster when mixed with water. Pueblo Grande also included residential “suburbs”, astronomical observation facilities, waste disposal facilities, and ball courts. 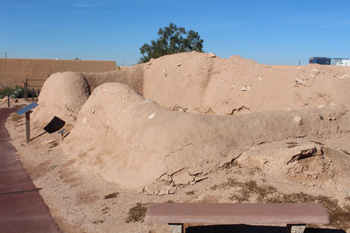 I walked past the remains of the platform mound, the ball court, special purpose rooms, and the Solstice Room. At summer solstice sunrise and winter solstice sunset, the sun’s rays passed through the corner door and onto another door in the middle of the south wall of the Solstice Room. Some researchers think the room may have been used as a calendar.

Inside the museum, Hohokam artefacts were on display – jewelry, pottery, tools, and cooking utensils, including a basalt mortar and pestle used to grind mesquite pods into flour. I read about Hohokam life and culture as pieced together by archaeologists as they uncovered ruins and studied relics. 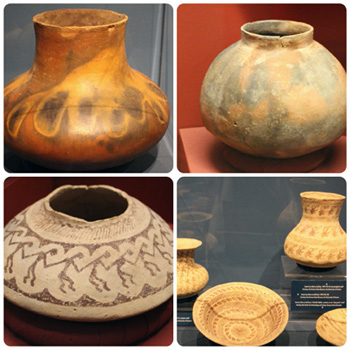 Pueblo Grande was built at the headwaters of a major canal system. The Hohokam cultivated many plant species, including maize, cotton, squash, amaranth, little barley, and beans. Unlike today, The Salt River ran year round during Hohokam days. But the arid desert environment did not produce enough rainfall to grow crops. The Hohokam built over one thousand miles of canals and engineered the largest and most sophisticated irrigation system in the Americas, no small feat considering the primitive tools they had. 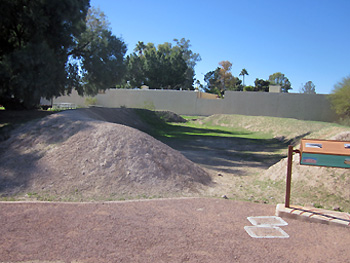 Mesa Grande Cultural Park contains the ruins of a temple mound built by the Hohokam between AD 1100 and AD 1400. At first glance, I was not impressed with the site. Just a mound of dirt and a ditch. The site became more interesting as I walked through it and viewed it in context of the historical information provided on sign posts. The Park of the Canals contains no mound village but displays the remains of over four thousand feet of Hohokam canals in three different sections. Also located with the Park is the Brinton Desert Botanical Garden, a small garden containing plants found within the desert environment.

Over five hundred miles of Hohokam canals have been recorded in the Salt River Valley. Some canals were more than twelve miles long, up to one hundred feet wide and fifteen feet deep. For four hundred years after the Hohokam disappeared there were no permanent settlements in the Salt River Valley. In the late 1800s, settlers to the area discovered the abandoned canals. They cleaned out, rebuilt, and re-used some of the canals to irrigate crops. Companies and individuals later built new canals and an agricultural community grew. 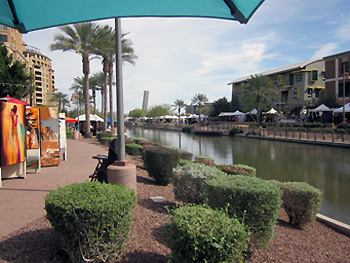 Canals remain important to irrigation within the greater Phoenix area today with nine major canals and over nine hundred miles of “laterals”, ditches taking water from the canals to delivery points. Paths alongside the waterways are used for walking, running and biking. Scottsdale, one of the other cities in the greater Phoenix area, has turned a canal area into a modern meeting place and tourist draw. The banks of Scottsdale Waterfront, in a revitalized area of downtown Scottsdale, are lined with palm trees, public art, courtyards, fountains, and walking paths. The area contains restaurants, outdoor cafés, specialty shops, and high-rise residential buildings, and hosts music and art festivals. It feels worlds away from its ancient Hohokam roots.

What happened to the Hohokam? It remains a bit of a mystery. Although their descendants live on as members of the Tohono O’odham Nation, the Hohokam disappeared from the valley around AD 1450. Some archaeologists believe environmental catastrophes seriously affected agricultural production. Akimel O’odham oral histories indicate conflicts between groups may have contributed to the area’s abandonment. Or perhaps an influx of people to the area made population levels too hard to sustain. Whatever the reasons, their legacy lives on in the canal system and the ruins of mound villages. Their life and culture are what the Pueblo Grande Museum and Archaeological Park calls “the ancient heart of Phoenix.”

♦ Pueblo Grande Museum and Archaeological Park is open daily. See the website for hours, rates, and directions.
♦ Mesa Grande Cultural Park is open Tuesdays through Sunday. See the website for hours, rates, and directions.
♦ Park of the Canals and Brinton Desert Botanical Garden are located in Mesa between Brown and McKellips on Horne on the west side of the street. Admission is free.
♦ Scottsdale Waterfront is located along the north and south banks of the Arizona Canal south of Camelback Road between Scottsdale Road and Goldwater Boulevard.

About the author:
Donna Janke is a Manitoba-based writer who has spent several winters in Arizona. She loves to explore history, culture, art and nature wherever she travels and to share the stories she finds through narrative, photos and personal reflection. She blogs at www.destinationsdetoursdreams.com.

All photos by Donna Janke