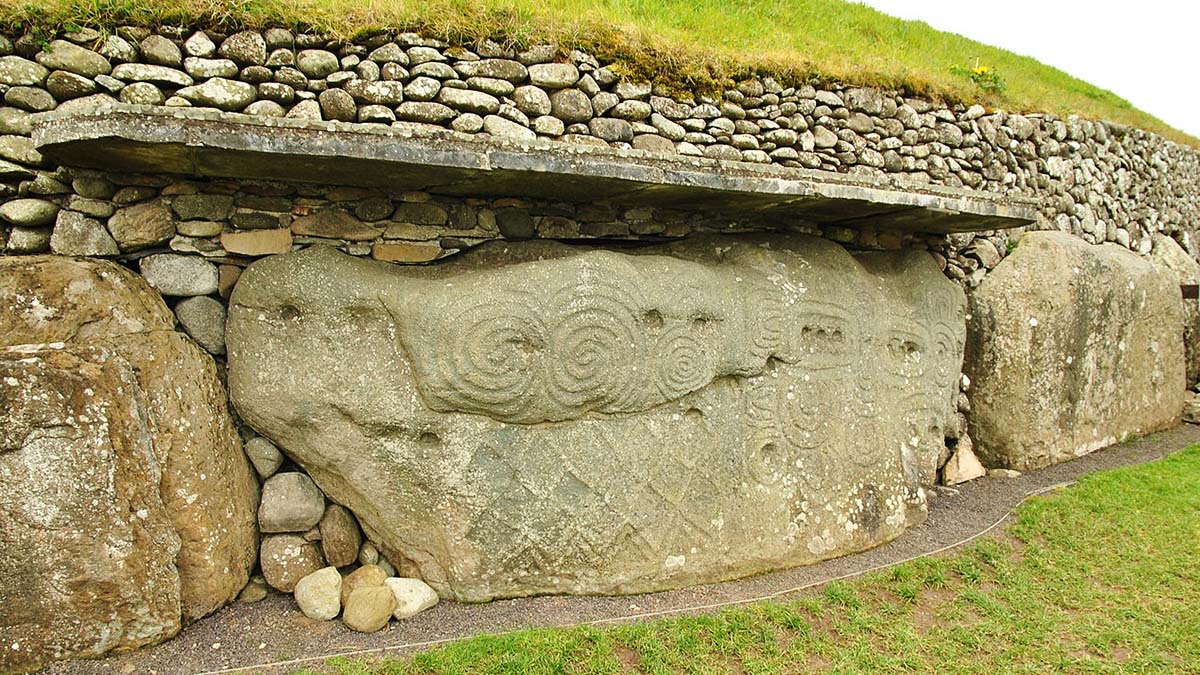 Bringing In The Light With The Winter Solstice

I struggled against the wind and rain as I carried a knapsack and pulled a suitcase up the steep incline from the parking lot towards Newgrange, one of the Passage Burial Tombs in east coastal Ireland. My red umbrella continued to turn inside out. I felt constantly confronted yet also exhilarated with this fierce encounter with an early autumn storm. 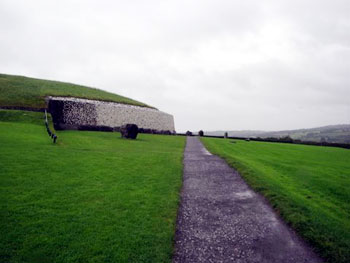 Rising seventy metres on a black shale bench above the glacial silt plains of the River Boyne sit three megalithic tombs of the Neolithic or Late Stone Age also known as Passage Tombs or burial tombs. They date around 4000-2500 BC – Newgrange, Knowth and Dowth being the major ones – and are situated midway down the east side of Ireland.

They were built up to 6000 years ago in an area already settled by farmers in a very fertile area of Ireland. Part of this geographical island lying in the Bend of the Boyne, Bru na Boinne, was clay soil, another part gravel soil and yet another, slate like. The varied soil types meant that neither extreme drought nor rainfall could destroy all the crops. It had built-in weather safeguard. It was also a more protected, drier part of Ireland in general. The consistency of the climate gave rise to farmers who became increasingly wealthy and who, with the storage of varied crops, could afford the luxury of surplus time and energy to focus on extra non-productive activities such as the building of great stone monuments and other smaller stone structures. Practices, over time, were part of a cult of honoring dead tribal leaders which probably included rich ceremonial social interaction. Legend says the tomb was dedicated to Dagha, the sun god of pre-Christian times and later became the burial spot for the pagan kings of Tara only fifteen km away. 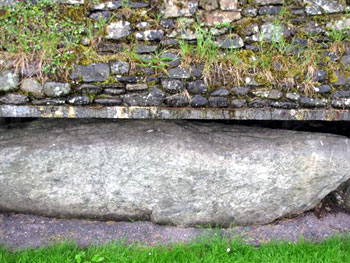 Passage Tombs have several common features: a mound in the shape of an egg called a tumulus. It is 85 meters across, 13 meters high and covers one acre. It is defined by a ring or kerb of 97 stones, a passage way and a chamber. I knew without doubt that this is where we got our word, curb which has the same basic use today – to define a certain boundary The building of the three Passage Tombs above the River Boyne seems to have developed over several hundreds of years, the design finally climaxing in the shaping of a cross. With a central space at the end of the passage way it also has a chamber on each side and also beyond it, making a very crude cross shape.

These Passage Tombs are known to be burial-places built from huge rocks. The passage way is built of large upright stones known as orthostats, averaging l0m in height and lead to a burial chamber. Both the 24m-long passage and burial chambers are roofed by large lintels or roof stones which fit into exact place. In Newgrange Passage Tomb the roof is held in place by the weight of the mound and the alternating layers of stone and sod which extend over the entire tomb. The entrance faces south-east. Kerb stones, 3 metres by l metre, laid end to end, keep back the earth and stone around the perimeter of these tombs. Artistic designs – usually circles, spirals, zigzags and triangles – are etched into their surface. I marveled that after all the past centuries these designs are still very clear.

It is also thought that since such immense energy and time was given to the etching on these stones that some sort of celebratory social ritual took place in a circular movement around the outside. 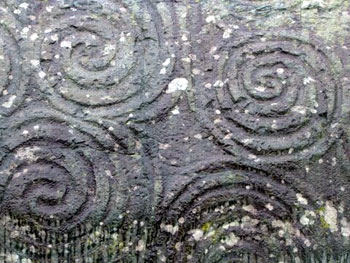 Waiting for my group of ten to enter the passage way, I wandered around the outer path surrounding this UNESCO World Heritage Site. Returning to the opening I suddenly found myself alone. The site’s guide and the group had disappeared into the Tomb. I had to find a place to leave the umbrella and luggage and strapping my knapsack onto my chest I ducked low under the stone lintel of the entrance. All was darkness. I had to move sideways for most of the passage was very narrow. I could hear voices ahead. I was well aware that I was walking where my Irish ancestors had walked, where they had brought their dead to cremate. I finally came out to a dimly lit rounded chamber where a large three-spiral stone sat in a recessed part of the earth floor. Small chambers opened off the larger chamber to roughly take the shape of the cross. Three large stone basins, each about one metre wide were thought to have been used in cremation ritual. The tomb was plundered in the late 800’s AD by Viking raiders and after its recent excavation there is nothing left but the stone structure. 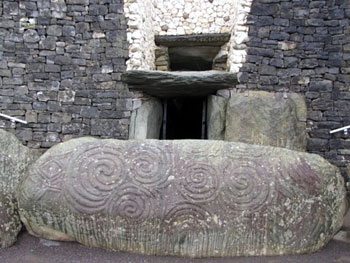 During the early days of Newgrange’s excavation there was a growing belief that the rising sun, at some unknown time, used to light up the three-spiral stone at the end of the passage. Finally on December 21st, 1969, the excavating crew investigated this idea. They recorded that the sun appeared above the horizon and a small shaft of light about the width of a pencil entered the roof-box. It was an aperture like as in a camera, l meter by 0.25 meter, and had been built behind the first lintel and below the second. This very narrow shaft of light shone along the whole passage to reach to one of the basin stones in the end chamber. Quite quickly the light widened to a 17 cm shaft and swung with a life of its own across the end chamber and the tomb was entirely lit. Shortly this 17 cm band of light narrowed and finally ceased to shine at all into the tomb. The tomb was again in darkness. For seventeen minutes, it was recorded, direct light entered Newgrange, not through the main door but through the specially designed slit which laid under the roof-box at the outer rim of the passage. It was most obvious that a specialized ritual of bringing the light into the tomb during the winter months was established. Since the burial tombs were a place of reverencing the dead, it is thought that the purposeful entering of the light was possibly symbolically giving the dead a passageway to the afterlife. Six thousand years ago, our ancestors had developed a ritual honoring the winter solstice—the sun’s rising on the shortest day of the year. I was in awe at the knowledge these ancient ones had possessed and had passed to us. I stood where ancient ritual had taken place and felt part of the eternal link that connected us all and I felt gratitude. 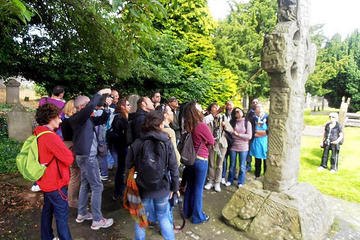 Newgrange cannot be directly accessed. You must be on a guided tour that sets off from the Bru na Boinne Visitor Centre, however you reach the centre.

To Get to the Centre:

From Dublin: M1 motorway heading north and turn onto Donore Exit near Drogheda. Travel six kilometers to Donore, turn right near the bar and restaurant, travel one kilometer to the Visitor Centre OR take a day tour that leaves from Dublin.

From Drogheda: Bus Eireann runs a bus to the Visitors Centre. It takes 20 minutes and runs from 10:15 am to 4 pm.

Other Sites To See:

Knowth: Another Passage Tomb; Also close to Newgrange; associated with the summer and spring equinoxes.
Dowth: a lesser of the three Passage Tombs in the same area.
Hill of Tara: 15 km from Newgrange; a Passage Tomb known as the ‘Mound of the Hostages’; thought to be where Scotland’s ancient kings were crowned.

Photo credits:
First Newgrange stones photo by: John5199 / CC BY
All other photographs by Mara Baudais.