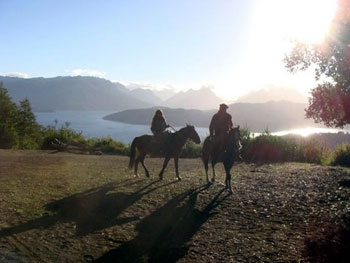 ‘Andrés, do horses like being ridden?’ I ask Andrés, our guide. 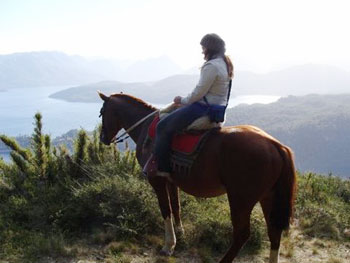 We are riding in the Parque National Nahuel Huapi, in Argentine Patagonia, just above Villa la Angostura, and between Bariloche and San Martín de los Andes.

‘I think they’d rather be grazing in a field,’ Andreas replies. ‘But once you decide to ride, you have to play by the rules. Talk to her! Kick her! Use the stick!’

I follow his advice, but my horse, Luna, with much encouragement on my part, and little enthusiasm on hers, still lags behind. The two Argentine lawyers, whose combined ages hardly add up to mine, and who are clearly far more experienced horsewomen than I, trot ahead, barely within my sight, their long dark hair blowing in the breeze. I can just see Gisela’s horse, whose hooves seem to dance as he walks, making her sway to his rhythm. The rough path is steep, taking us through the mountain’s dense cloak of coihue trees, the low flattened branches blocking out the sunshine and cooling the air. The coihue tree thrives in this area, and can grow to almost forty-five metres and its girth can reach almost two metres. The branches here are decked with lichen beards: a sure sign of unpolluted air. 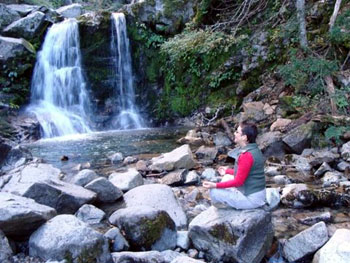 Half-way up the Cerro Belvedere, we stop at a waterfall, the Cascada Inacayal, to rest.

‘So Andrés,’ I asked. ‘Would you call yourself a gaucho?’

‘So do you write horseride doer on official forms, under profession?’

A man of confidence, like any good gaucho, I thought.

When we remount, I feel energized, but Luna chomps away at bushes and trees all the way up. We emerge from the forest into Heidi-like pastureland and let the horses loose to pasture. Luna looks decidedly happier. We look over the sheer cliff to Lakes Correntoso and Nahuel Huapi, joined by what the locals say is the shortest river in the world, the 250-metre Rio Correntoso. The sky is clear, the air fresh and dry, and the view unbelievable. Would cobalt describe the colour of the water? Aquamarine? Sapphire? Or perhaps there’s a colour called Argentine Early Autumn Lake Blue. 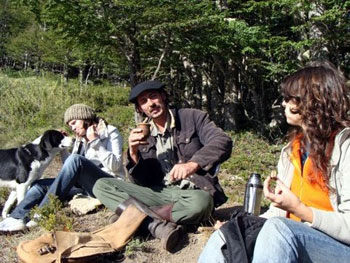 We sit on our coats on the ground, and Andrés produces a mate gourd filled with yerba leaves, a silver straw, and a flask. He soaks the leaves with hot water, sips, refills, and passes it round. The taste is much milder than what I had become used to living in Uruguay. I have never shared mate with strangers. At the top of that mountain, backed by the sound of a woodpecker, it was a truly bonding experience. After each of us has drained the bitterish, warming liquid, Andrés refills the gourd for the next person.

Once again, I break the silence.‘Andrés, what’s the difference between Uruguayans and Argentines?’

‘Uruguayans drink mate all the time,’ he explains. ‘We only drink it occasionally.’

One of the lawyers elaborates: ‘Uruguayans drink mate wherever they are, whatever they’re doing. They’ll even drink it when they’re walking down the street or standing in a queue. But we Argentines always stop and sit down to drink mate. Other than that, there’s no difference. Except we swear more. And they say Ta when they mean Okay.’

So no mate on the hoof, in Argentina. 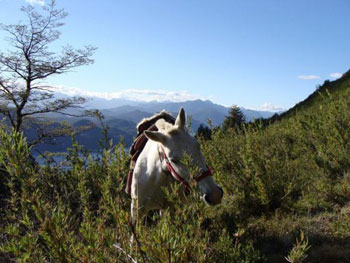 We relax for a while longer, enjoying the sunshine, then Andrés gets the horses ready for our descent. I hadn’t realized that we would have to lead the horses a long way down the mountain on foot, as it was too steep and dangerous to ride them, and their saddles would slip. I feel almost less confident off Luna’s back than on her. I can sense her bulk as she carefully picks her steps, so close behind me that I can almost feel her warm breath on my neck. I dread to think what might happen if she or I should slip.

But no matter what the risks, it is definitely worth it, for the air, the view, the chat, the mate, and the look on Luna’s face when she was is free on the mountaintop. 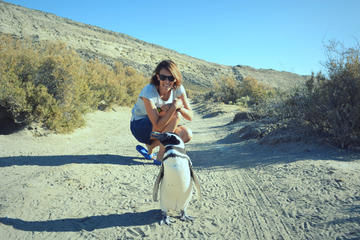 About the author:
Paola Fornari was born on an island in Lake Victoria, and was brought up in Tanzania. She has lived in almost a dozen countries over three continents, speaks five and a half languages, and describes herself as an “expatriate sin patria”. She explains her itinerant life by saying: “Some lead; others follow.” Her articles have been published in “The Buenos Aires Herald”, “The Oldie”, and “Practical Fishkeeping.”

All photographs are by Paola Fornari.